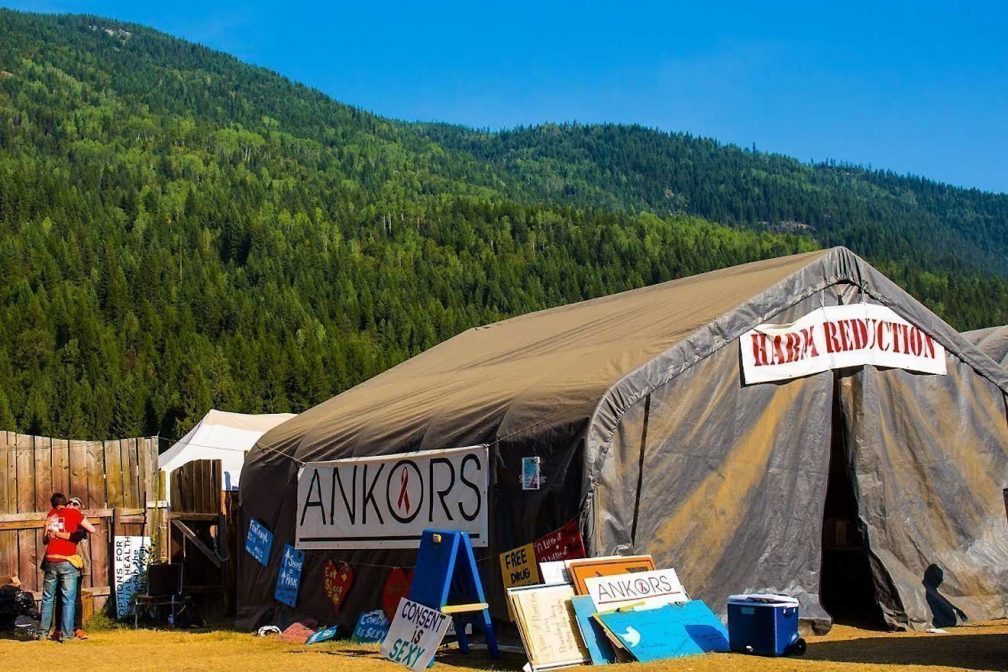 Spanning four days in the stunning Salmo River Ranch in British Columbia, Shambhala boasts a line-up that gives a big nod to the roots of the festival, but also brings in some massive house and techno names, most notably letting certified jolly house dude Claude VonStroke and his label Dirtybird take over the Pagoda stage. Dusky, DJ Harvey, jackLNDN, Jauz, MK, Skrillex and scores more made sure that the festival had good music alongside the openness and transformational vibes.

In the late morning of the first day, a long line of curious drug users sprawls out and around a large black tent that's simply marked 'Harm Reduction'. All are waiting for a turn to find out if the stuff in their baggies is actually the primo gear their dealers swear by. One by one, people are asked what substance they want to test and then directed to a testing booth within the privacy of the tent. Test after test comes back with strange, sometimes baffling results.

Aussies Andrew and Max, 23 and 24, proudly place their gram bags of coke on the table, eager to find out if they got what they paid for. A tester asks for a small piece to be broken up into three piles and separated onto notecards, then three separate tests are conducted by mixing the samples with different reactive chemicals in separate glass vials. After the reactions occur, the tester brings the samples into the light to compare the colors of the chemicals in their vials against charts that show different cutting agents and purity ranges. The Aussie boys are crushed to find out that their coke is heavily stepped on, with their test returning a light amber shade that indicates low-medium purity.

"Coke is about $400 a gram in Australia, so even though the shit isn't pure, I don't feel like we got ripped off," Jake says.

The most controversial and adulterated drug at a lot of North American festivals is Molly, often sold as a capsule form of MDMA. Violet, 23, has doubts about the purity of hers due to its black colour. The tester explains that the drug's hue has little to do with the purity or composition and almost exclusively indicates nothing more than the process by which it was made.

The initial test results reveal that the the substance is mostly MDMA, however a second test finds the pills to also contain TMA-6, a dangerous amphetamine analog. Although her Molly isn't completely pure, Violet doesn't want to put it all to waste. For several minutes the testers inform her of the various risks surrounding TMA-6, at which point she thanks them for their time and leaves, drugs intact.

"My mom told me to be safe," says Violet, "so I came to Shambhala."