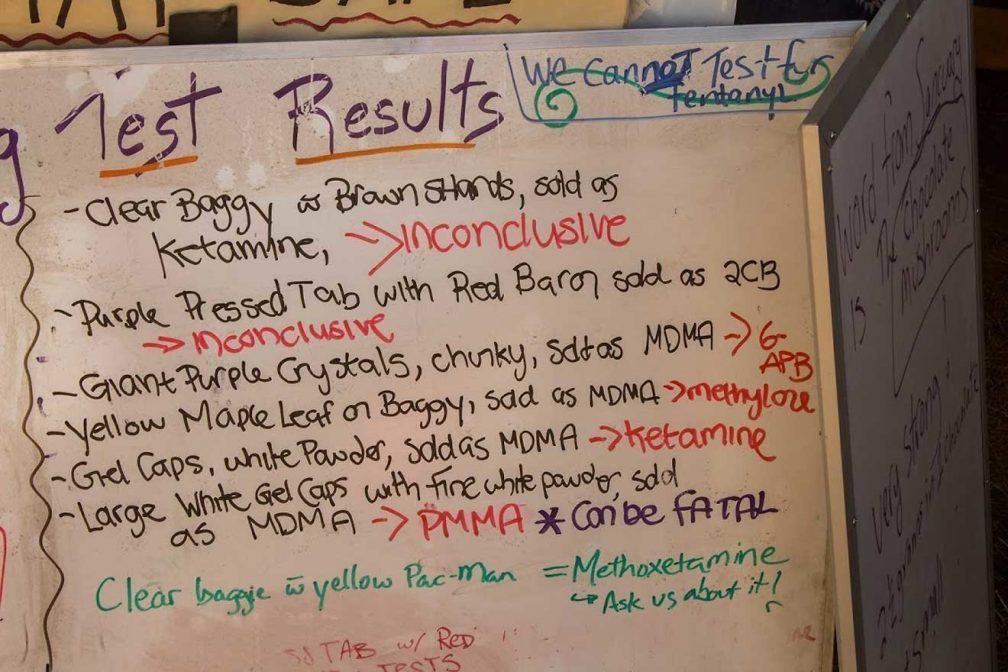 Due to demand for the initiatives, harm reduction and medical attention services at Shambhala are separated in an effort to make drug testing easily accessible to all. ANKORS worker, Chloe Sage, explains that Harm Reduction is as much about education as it is prevention, with half of the booth dedicated to information pamphlets on every drug and drug combination imaginable. She also teaches drug and sex education to middle schoolers, and sees her work as an alternative to the failing approach at drug education taught by initiatives like Drug Abuse Resistance Education.

25-year-old Canadian Julia comes in to test a vial of acid that she bought locally. After accidentally dropping a larger sample than intended onto the testing dish, the tester is quick to return a positive test result. Though the exact purity can't be accounted for, Julia is excited that she hasn't been duped into poisoning herself with 25i or another common acid counterfeit. "Even though I've already taken a bunch of this stuff, I'm really happy that I finally got it tested" she says.

Many in the industry are demanding that on-site harm reduction services like these become standard at festivals and clubs. While the bigger raves are struggling navigate the legal minefield that comes with offering these services to a oung audience, some smaller events, like Shambhala and California's Lightning In A Bottle, are embracing a full-scale harm reduction program that puts them at the cutting edge of progressive recreational drug policy.

Over 3,500 tests are conducted over five days, with the most common drugs being MDMA, ketamine and acid. Unlike the tragic events of Hard Summer, and Calgary's Chasing Summer (which reported 17 overdoses), not a single casualty was reported at Shambhala this year, and there can be little doubt that we owe that to a culture of openness and education towards drug use.