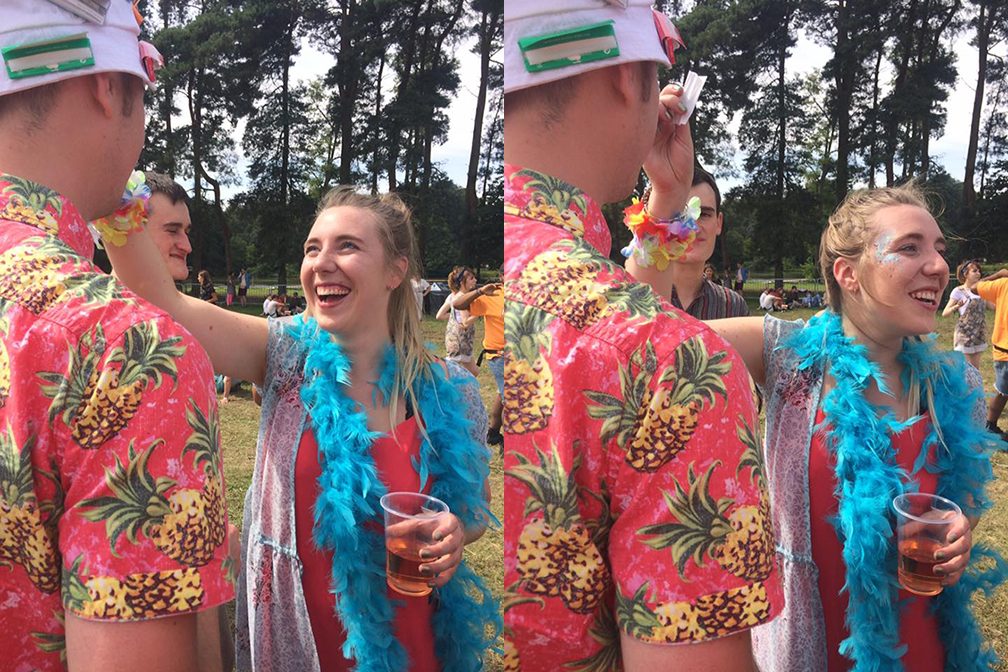 When did you decide to make the Rizla bucket hat?

It started last year. There's a festival all my mates and I go to called Beat-Herder and they have a fancy dress policy. Last year everything had to begin with the letter 'R' so I went as a Rizla. I bought a T-shirt off eBay for like seven quid with a Rizla logo on it, and then made the Rizla hat as well.

Was it a moment of divine inspiration?

It must have been something like that. Me and my mates had a good laugh last year, and I wore it at Boomtown as well, but it sort of seems at Houghton this year is when it got a bit more attention than it had done previously.

Why do you think that is?


I dunno. I was walking down into the Quarry stage on Friday afternoon, and I'm over six foot so pretty tall compared to most people. It must have just stuck out because I've never seen so many people fixated on one thing. My friend Vic was like, 'I don't understand what is going on.'

Were lots of people sampling the hat? What was the most popular colour?

Yeah. I think what sold the hat in particular is the orange liquorice Rizla. The colour is one thing, but it's not something that most people have seen, people definitely like to try them. And obviously the big skins. People never expect the big skins.

What’s your favourite type of Rizla?

That's a qood question. I'm more of a blue man.

How much did you spend on Rizla for the hat?

You can get a four pack for about a quid, and I think that hat cost under a tenner, which considering fancy dress is something that people go to a lot of effort for, it was cheap and pretty easy to be honest. People go to a lot more effort and get a lot less...

A lot less functionality, if anything.

Festivals are ripe for exaggerated outpourings of emotion. What was the best response you got to the hat?

It was just the number of people who came up and went 'that's a great hat'. And then they were absolutely lost for words when they realised it actually had a function as well. I lent it to my mate on the Saturday night; I was watching him and you could just see everybody constantly going over like 'what the fuck is that?'.

So you not only gave away Rizla, but the full hat. Is there any end to your generosity?

I lent it to my mate, and obviously with something like that it's weather dependent. On Friday at Houghton it was beautiful and I thought, the weather's looking a bit bad for Saturday so I better crack it out. I gave it to him on Saturday and it got a bit rainy, and I don't really know what happened to it. It's probably somewhere in Norfolk right now, still doing the God's work.