Wakana Reunion: Not for everyone, and all the better for it - Scene reports - Mixmag
Home Latest News Menu

Right in the heart of Spain’s breathtaking Los Alcornocales Natural Park, the Wakana region is spiritually fuelled, say the locals, by the nearby Cueva del Tajo de las Figuras (cave of the figures on the precipice). Set within the neighbouring southern Andalusian mountains, the cave paintings depicting extinct birds, four-legged beasts and anthropomorphs have been declared an Artistic Architectural Monument. What better place to host a 1,000-capacity reunion that celebrates nature, electronic music, and an array of art installations?

After a winding taxi ride through the mountains we descend steeply to the site, which lies beside a lake reflecting the rich purple sky and burning crimson sunrise like a mirror. We take a winding dirt track on foot and head straight for the main stage. Among a handful of trees, a cluster of iridescent blue and silver ribbons dance in the light of the full moon, something the first night of the festival celebrates. Stalls selling art, hand-printed swimming costumes, dreamcatchers, face painting and massages line the way. A spot-lit wooden stage decorated with lights like a glistening tiara plays host to Zürich-born Kalabrese, a charismatic musician who tells the crowd about his adoration for director Jim Jarmusch and streaming platform Netflix. ‘If you’ve never seen a Jim Jarmusch movie,’ he declares over a slap-bass beat, ‘I’ll come into your house, sit you down, and watch some Jim Jarmusch movies with you.’ He continues almost ritualistically: ‘Oh Jim Jarmusch… Jim Jarmusch…’ 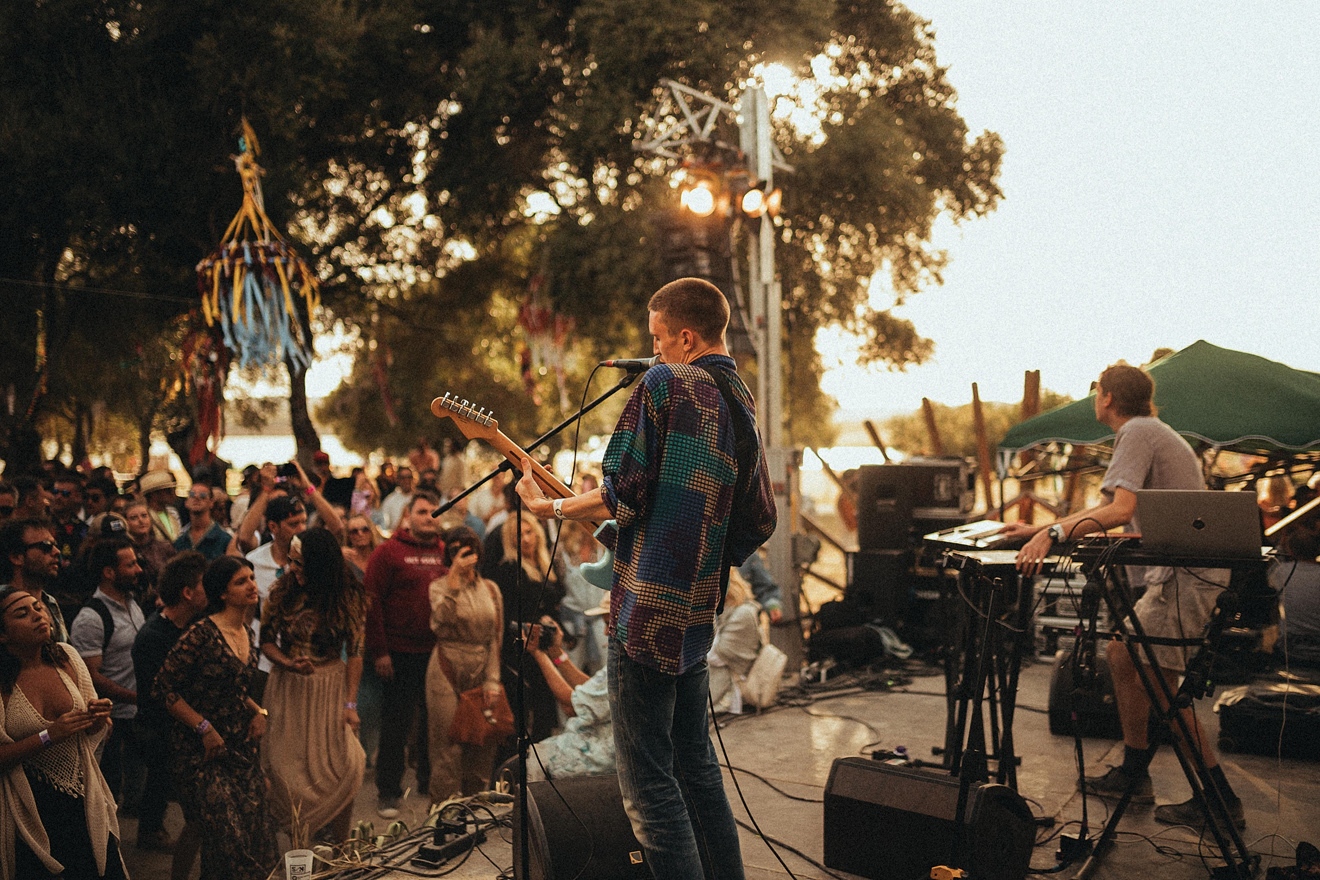 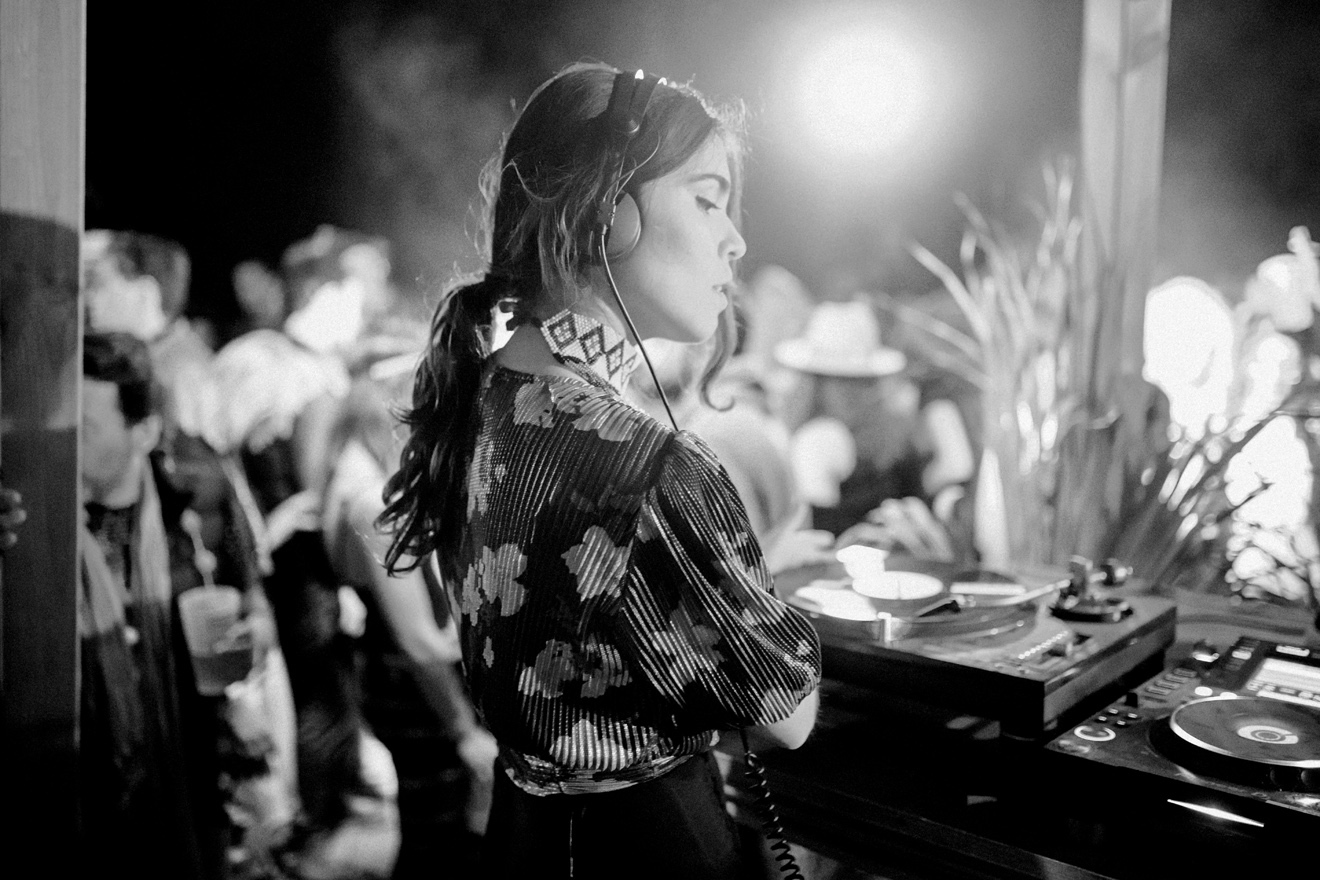 Scratching our heads, Mixmag drifts over to the Forest Stage. Were it not for a series of illuminated archways snaking through a field, the whereabouts of the second stage would be a mystery – at night the site is almost entirely immersed in darkness. We discover a tree lit up by a French visual artist who has digitally mapped thousands of threads that hang from the branches, each with a teardrop-esque droplet of light. A giant discoball is suspended nearby, its three wooden legs somewhat reminiscent of a lunar lander: as it rotates, Mixmag’s friend runs off piste to lie under its dazzling red lights. When we finally make it to the woods, some time later, we meet festival owners Luis Félix and Julia Catalán. With infectious smiles they welcome us wholeheartedly to their makeshift paradise.

We spend the evening yo-yoing from stage to stage and from artwork to artwork, seeking out hidden installations and engaging with representatives of nearly all the 15 nationalities at Wakana Reunion this year, a mix that’s consciously chosen. Attendees of last year’s first instalment were automatically welcomed back (hence the ‘Reunion’), receiving a secret code to input online. Everyone else had to pass a test through the Wakana website or be invited by an attendee of the previous year. Luis and Julia pose the questions online: ‘What makes you curious about Wakana?’ ‘Tell us something beautiful and something you want to share with the others.’ They hand-pick the candidates individually based on their responses and their nationalities so to ensure a wide array of intercontinental values. ‘‘We are all friends of friends, and we are growing like a little family,” Julia says, going on to explain that Wakana avoids elitism by being one of the cheapest festivals in Europe. “My mother always told me that diamonds are precious stones that can only be shaped with another diamond,” she says. “For us, our family are diamonds. They should be together and we should all shine.” 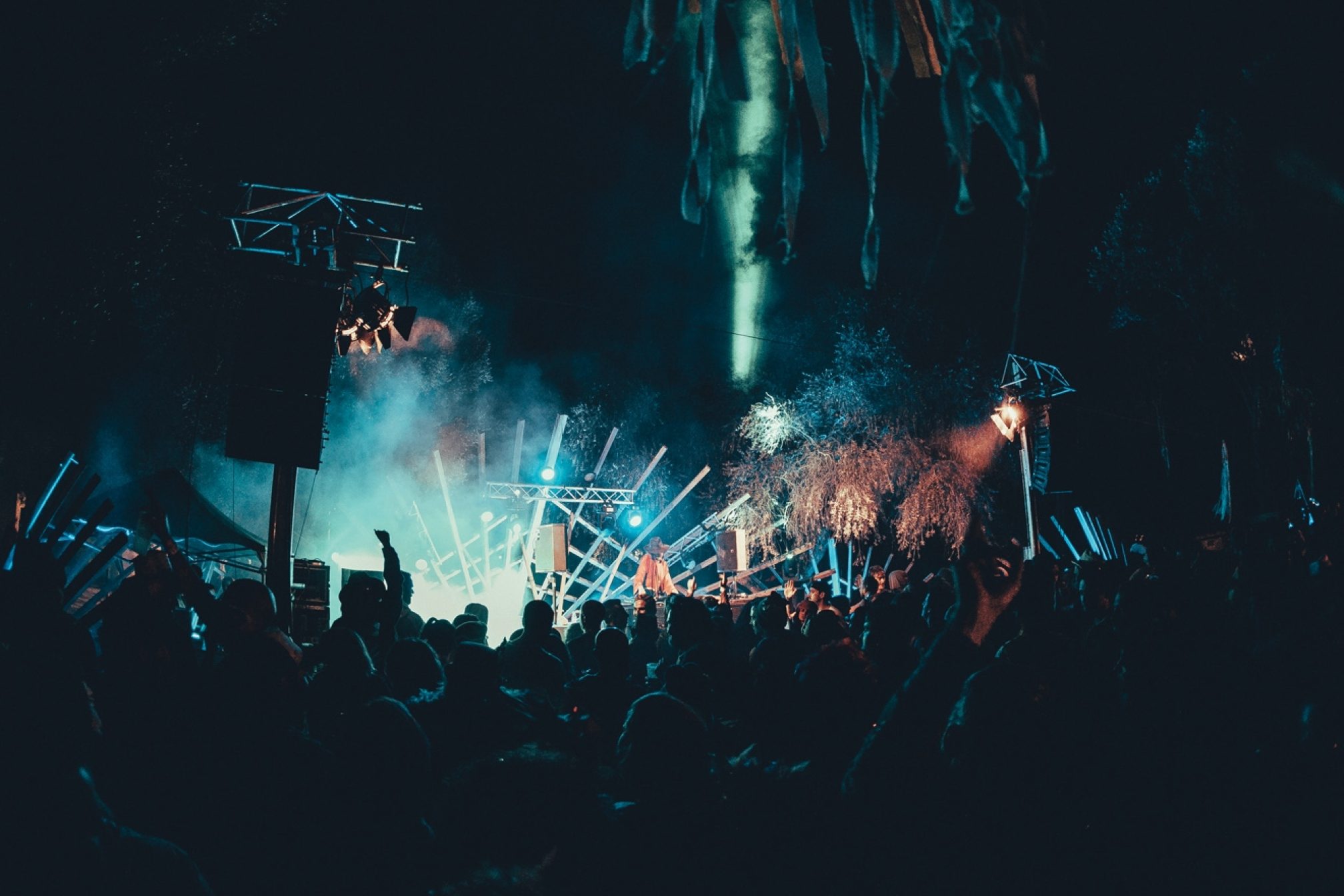 The traditional Spanish decorations tucked into the natural surroundings are repurposed from sustainably sourced textile offcuts and crafted, by hand, by children at a local primary school. The site is immaculately clean. Cork tubes complete with lids are provided to those who wish to dispose of cigarette and spliff. We spend much of the night nestled in a blanket under an isolated and dimly illuminated cork oak. Lit by a single solar-powered bulb dangling from its crooked branches, it draws us in like moths to a flame. The distant thuds of Marino Canal b2b Miguel Payda from the Forest Stage mix with the chirping of crickets and the sound of gentle waves, lulling us into a slumber – until we wake, chilled, as temperatures plummet thanks to the moisture of the lake nearby.

In the daylight, the festival is transformed from mysterious art and sound experience to wellness retreat. The misty morning lake, clear blue skies and mountains dressed with greenery that circle the horizon provide the perfect backdrop for a Downward-Facing Dog. Looking up from a mat during a morning yoga class, some of the flexible bodies around us act as a gentle reminder that you’re never too old to rave so long as you treat your mind and body with the respect it needs. Carlos, a near 70-year-old local, is living proof. Dancing slowly at night, meditating (and dancing even more) at the Palapa (live music only) stage all day and attending almost all the classes, he becomes a totem, a personification of the festival’s attitude and spirit. 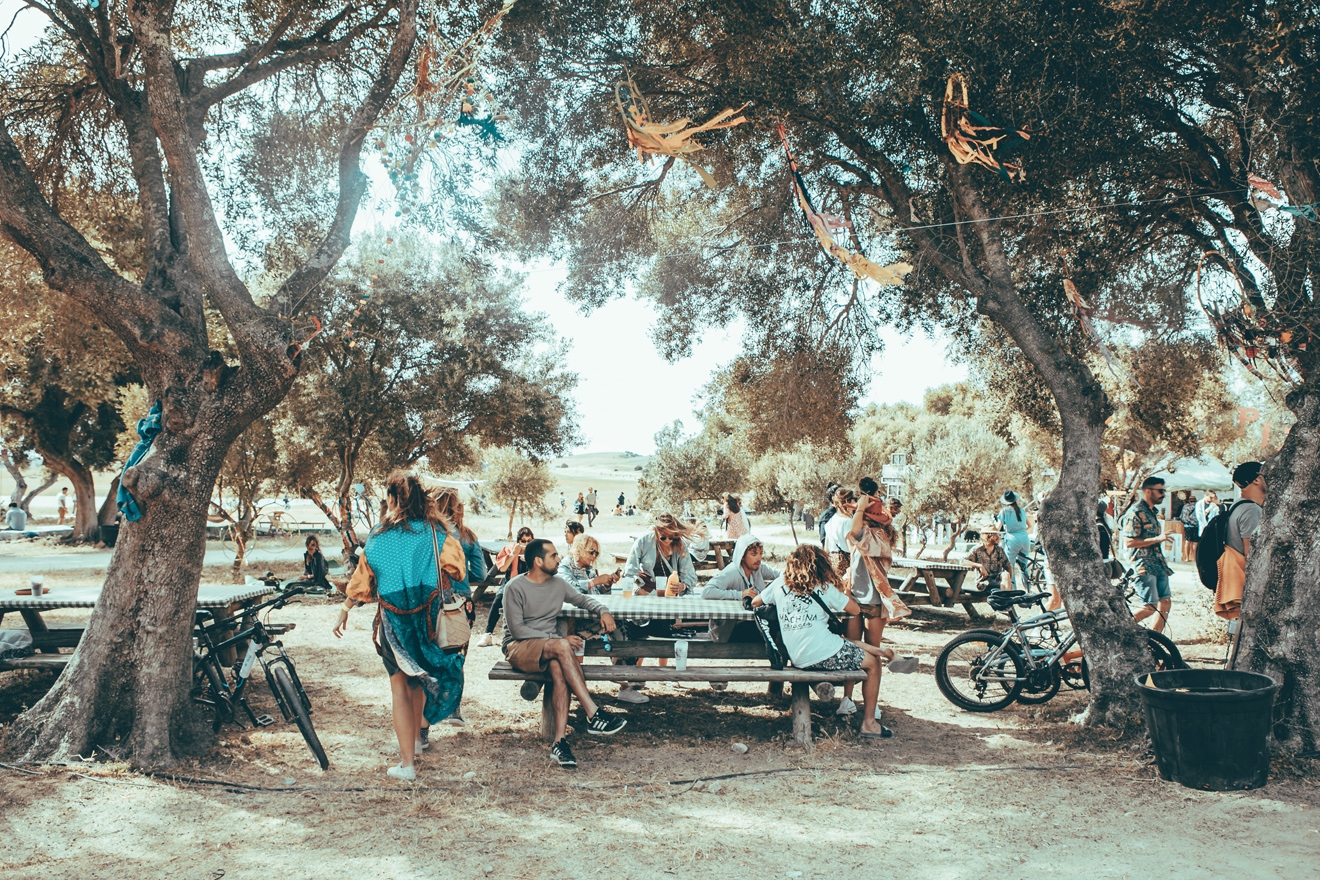 Our own spiritual healing is a little less straightforward. Having been told to lock eyes with a random person for five minutes after downing a cup of sweet, muddy cocoa, we thought things couldn’t get much more uncomfortable, but our late arrival to a sage-infused guided spiritual healing ceremony in La Gran Yurta disrupts the flow of the Hare Krishna chants – and we’re the only person out of 20 in the room wearing socks. The ritual is soundtracked by harmonium, djembe drum and guitar – someone in the crowd has even bought their own tingsha cymbals – and looking around, those with eyes firmly shut, heads tipped back, mouths agape and chanting are clearly feeling it. Making our escape, we grab a kayak and head across the surprisingly choppy lake to an island of cattle that protect the shores like the scenes depicted in the cave paintings.

With the live music and electronic/instrumental sounds of Omar Dahl (live), a headliner DJ set from Acid Pauli and a stand-out performance from Battersea-based loop performer Démi Ma (also live), who admits she “feels a spiritual connection to the landscape”, Luis and Julia have curated a melting-pot of musicality that sees spiritual travellers and artists alike return for the Wakana reunion. A panic just before the first day, when a fierce storm might have led to Fyre festival-style chaos was handled with trademark serenity. “[Wakana] is a place for healing,” says Julia. “People come and they have what they need. Which is love.”

Get the best of Mixmag direct to your Facebook DMs
Does hippy Ibiza actually still exist?
Children of the original travelling soundsystem DJs are upholding their parent's legacy