In the late 80s a collective of electronic music fans sought to develop a travelling utopia. The idealistic community – which resisted capitalism, neoliberalism and overpriced clubs – was conjured through the medium of a brick-sized mobile phone that held charge for approximately three minutes. Soundsystems such as Spiral Tribe, DiY, Sunnyside, Splat and Total Resistance occupied squatted warehouses and fields across the UK amid the height of the new age traveller movement. Their sounds echoed through the M25 ‘orbital raves’ and though the rigs were in questionable condition, it didn’t matter.

For around five years the dream was alive. “People were able to break the boundaries of unhappiness and ego caused by the divided society that surrounded them,” says Barney Philbrick, former free party DJ (and this writer’s dad). “Party people existed in a euphoric tribe of togetherness.” DJs began to raise families on the road and for a time it seemed as though rave was synonymous with community spirit.

But as with most utopian movements, the wave didn’t last. The Criminal Justice Bill was adapted to ensure that amplified dance music needed a license, and new age traveller gatherings saw police violence spike. In the mid-90s ravers became public enemy number one, and the scene changed forever. But 25 years on, the children brought up next to speaker stacks are taking their parents’ legacy to the next level. Here, five families explain how a passion for electronic music can be hereditary... 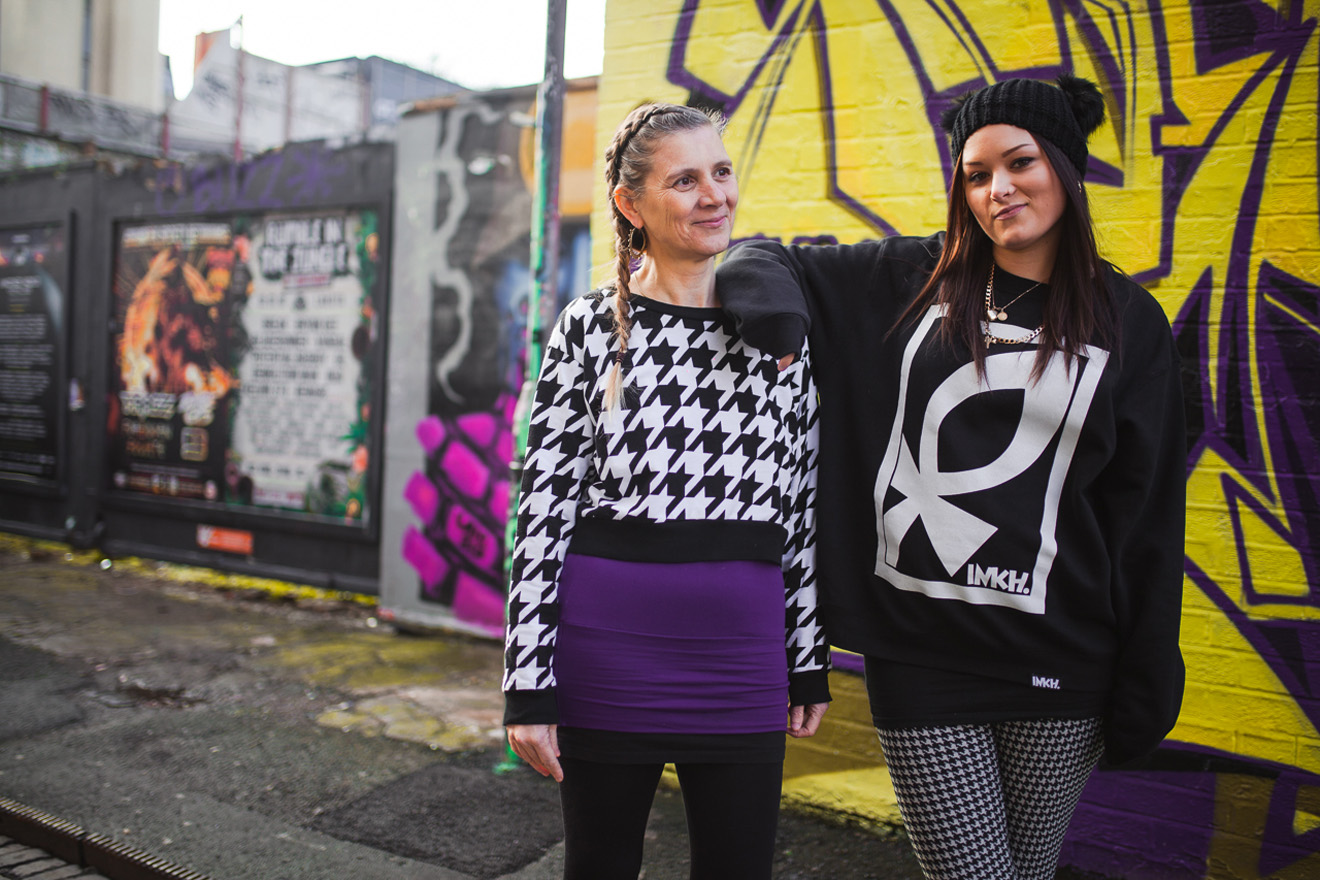 “At Boomtown Lucy was playing on a really big rig and there I was watching with my crew, shouting ‘Yeah!” says JenJen, a Sunnyside free party soundsystem DJ and former resident of Helter Skelter, Hardcore Heaven and Radical Rehousing in Amsterdam. “I was laughing, thinking, god, your monitors are the size our rigs used to be!”

When JenJen started out DJs were predominantly male, and she notes that one of the main differences between the 90s and today is the acceptance of women behind the decks. As one of the first female DJs from the UK to go to Ibiza, JenJen is is immensely proud of her daughter’s confidence when it comes to performing. Lucy’s hobby started at an early age, when she received a stack of vinyl for her 14th birthday. Now 28, she performs regularly as Shaded with large underground soundsystems such as Irritant, BBL and Kaotik, playing a mixture of drum ’n’ bass and jungle.

“My mum is the main reason I do what I do,” explains Lucy. When she was growing up they had a studio in the house with the decks set up ready to go, and JenJen showed her the ropes. Lucy and JenJen are both now studying sound engineering, and often perform back-to-back. 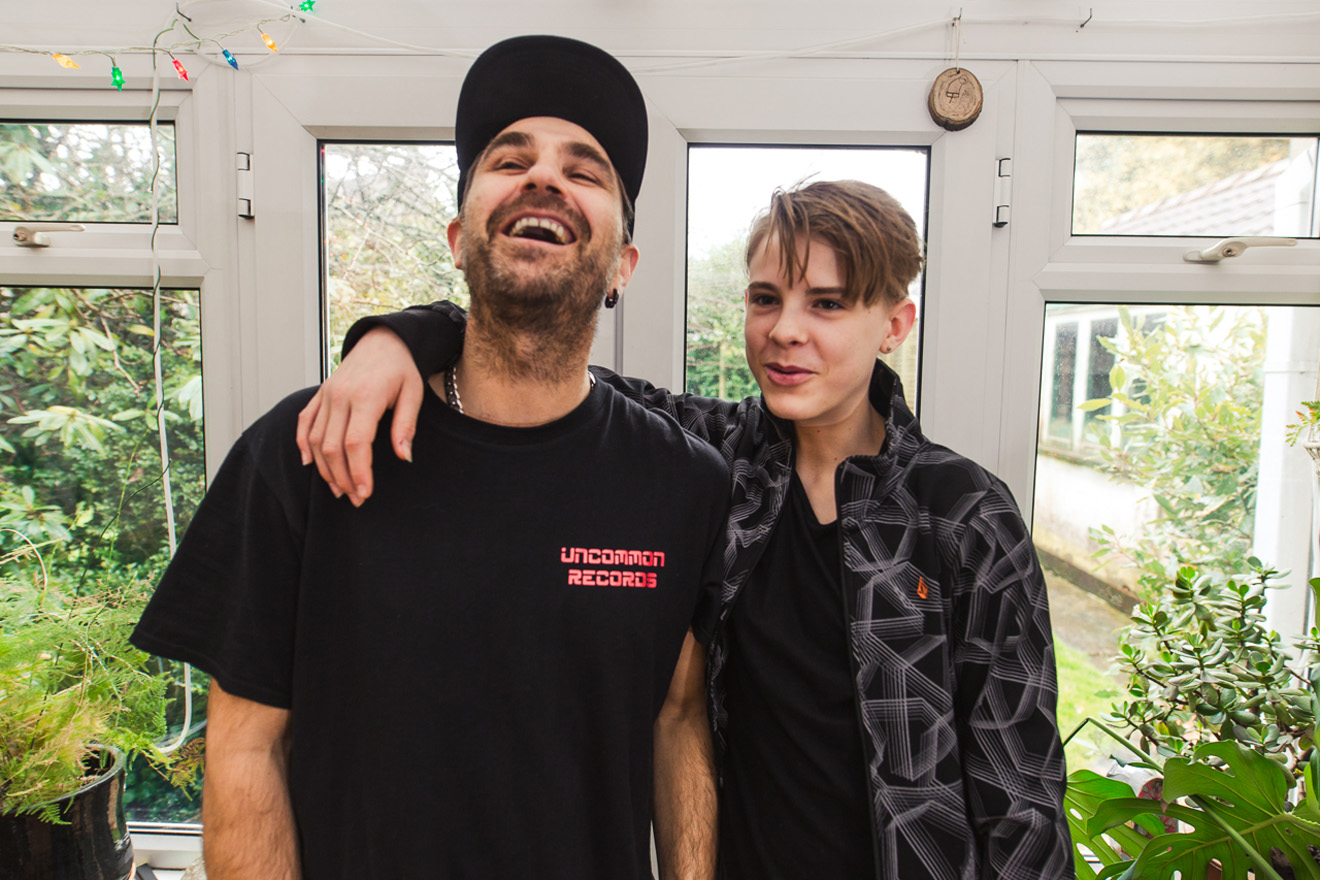 Ryan Resist is the site manager for the Arcadia Spectacular fire-shooting spider stage seen at festivals and events across the world. He’s also worked on Broadway shows, programmed The Common at Glastonbury, and for six years was musical director for Bassline Circus. Ryan was once a Total Resistance DJ living in a van, and although he has progressed from raver to producer, he’s always worked at festivals and parties, witnessing free party culture transform from a few hippies in a field to the for-profit festival behemoths of today. “There was a lot more discontent back in the 90s, and a lot more of a cohesive movement against the system and society in general,” he says, putting today’s greater apathy down to information overload. “As the system changes, so must the ways to push back against the elements of control that take from the many and give to the few.”

Ryan’s 14-year-old son, a dubstep and grime fanatic, takes music production lessons and calls himself MRT. His dad hopes to get him involved in future Uncommon Records releases. Despite the 90s utopian dream never having quite come to pass, Ryan remains optimistic about his son’s future, and says his goal is still to create a harmonious community for the next generation. 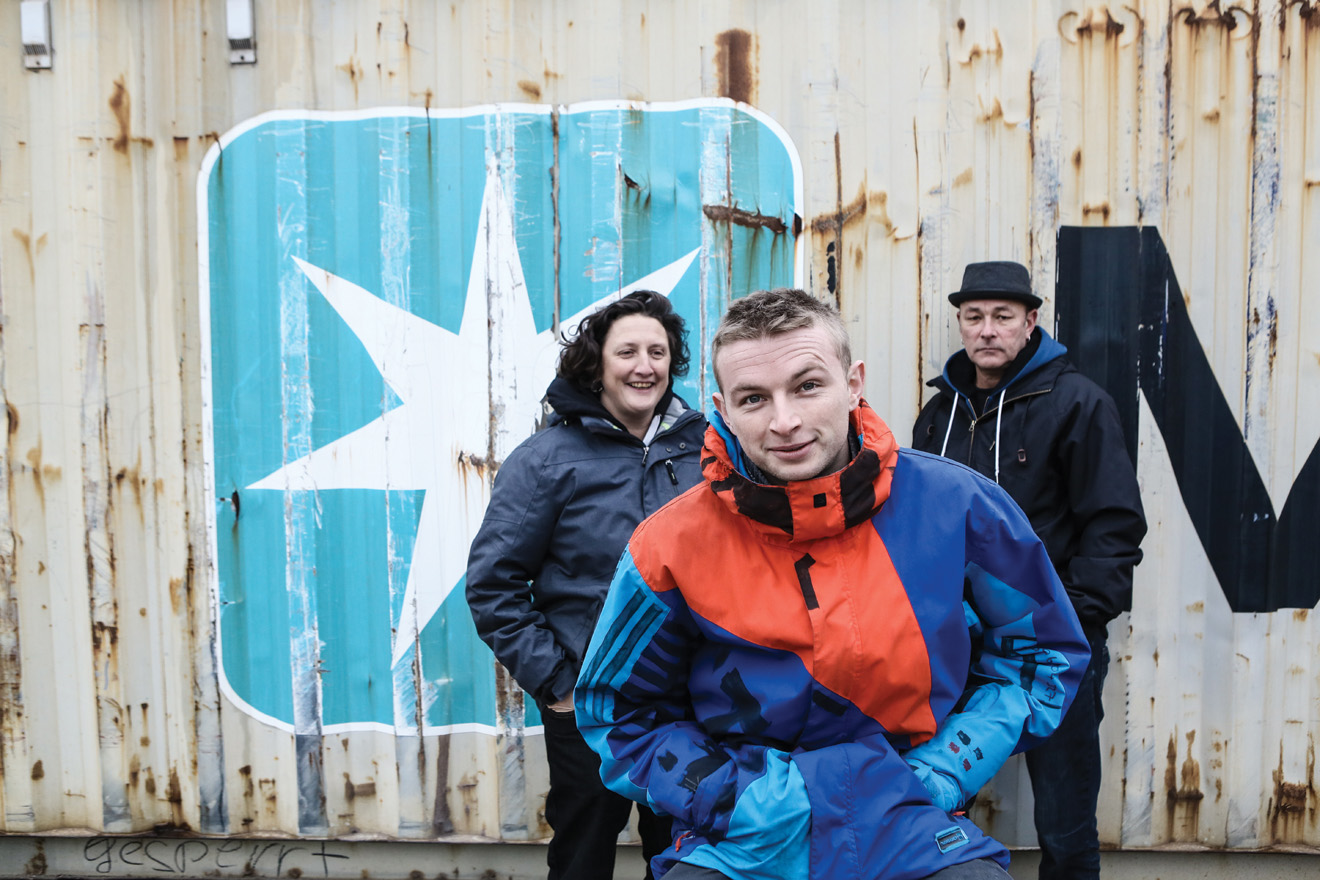 When Spiral Tribe original members Ixindamix and Meltdown Mickey had their son Max, they didn’t feel a need to settle down. Max was born on the road in Berlin, and attended his first rave at two weeks old. As a child he was immersed in free party culture and always thought the atmosphere was imaginative and fun. “Being brought up in a big blue Scania truck, my mum’s studio took up half of the place. I was always fascinated by the electronic gear, synths and machines. In my young eyes those flashing lights little digital screens, knobs and buttons looked just like the interior of a spaceship.” At the age of 12 Max was given his first drum machine as a birthday present, and his passion has continued from there. Now 23, he performed alongside his parents at the SP23 (part of Spiral Tribe) Sunday takeover on the Scrapyard stage at last year’s Boomtown.

While Mickey tends towards deep, ambient sets and Ixindamix still spins original acid, Max’s beats warm the party up with uplifting techno and house. “For me, it’s not about having the best tune, it’s about telling the best story through sound,” he says. “Get people dancing, get them on board of that spaceship, take off and go somewhere you need to go.” 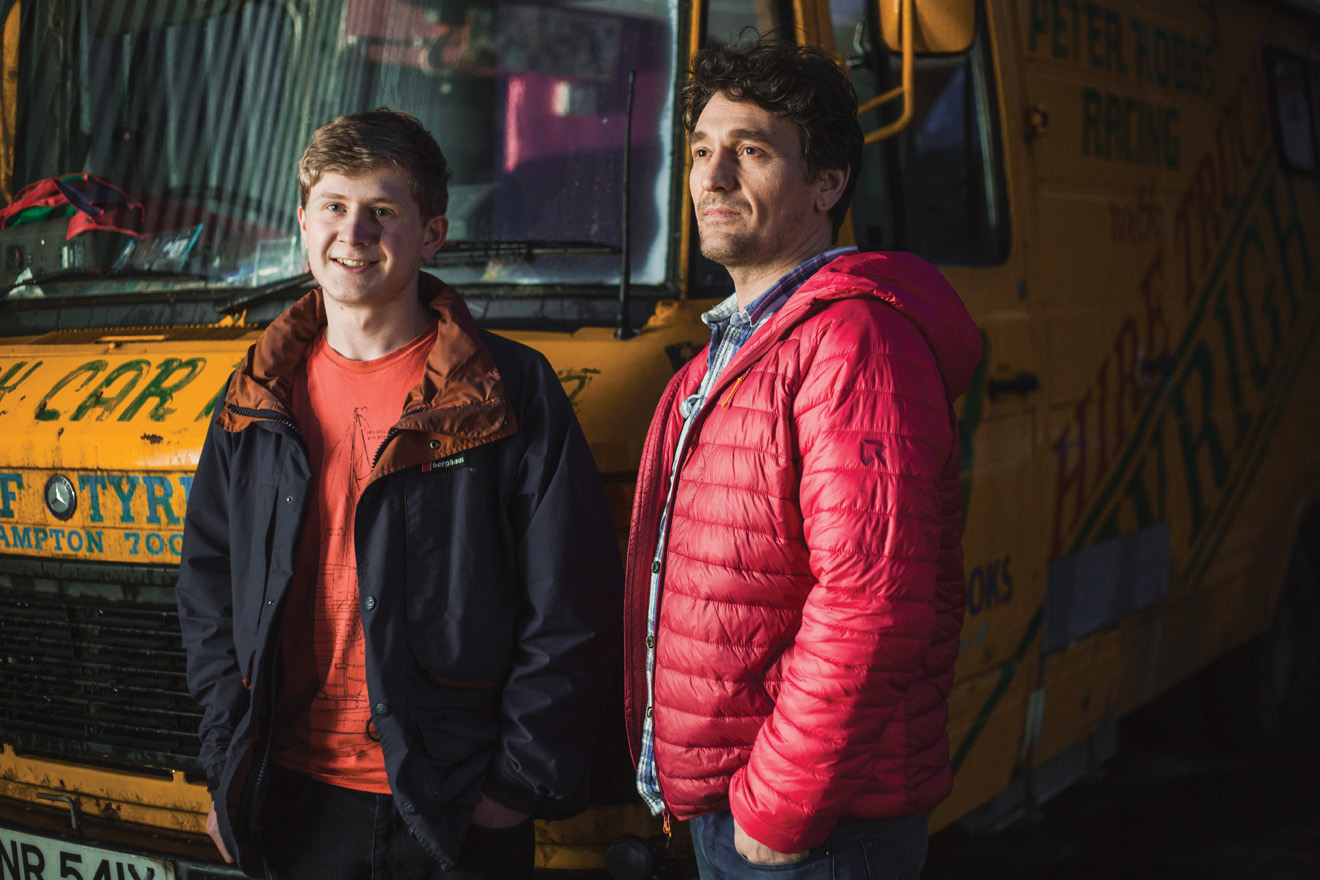 Craig Buy got his first taste of free party culture with a week-long trip to Castlemorton, the rave that changed the law. At the time, few people realised that it signified the end of free festival culture as they knew it. But it didn’t deter Craig. Inspired by DIY soundsystems and acid house, he and Barney Philbrick bought a battered old rig that had been pulled out of a club in Coventry and called it Splat.

Craig feels that the main difference between his early soundsystem experience and his son Murdoch’s today is the quality of the equipment, and the knowledge of how to use it. “We didn’t really have a clue how to use our equipment; we learned through trial and error,” he laughs.

Murdoch, aka El Médico, used his teenage years to develop a strong technical ability with controllers, vinyl and CDJs, and at 21 is now exploring genres. “I used to play just d’n’b until parents took my to my first free party, DIY’s 25th birthday,” he says. Since then he’s developed a passion for house and techno, particularly the harder genres. Now a powerful father and son duo, the pair often DJ back-to-back at parties and are collaborating to form The Good Times Alliance, an immersive rave experience incorporating music, VR and video mapping. 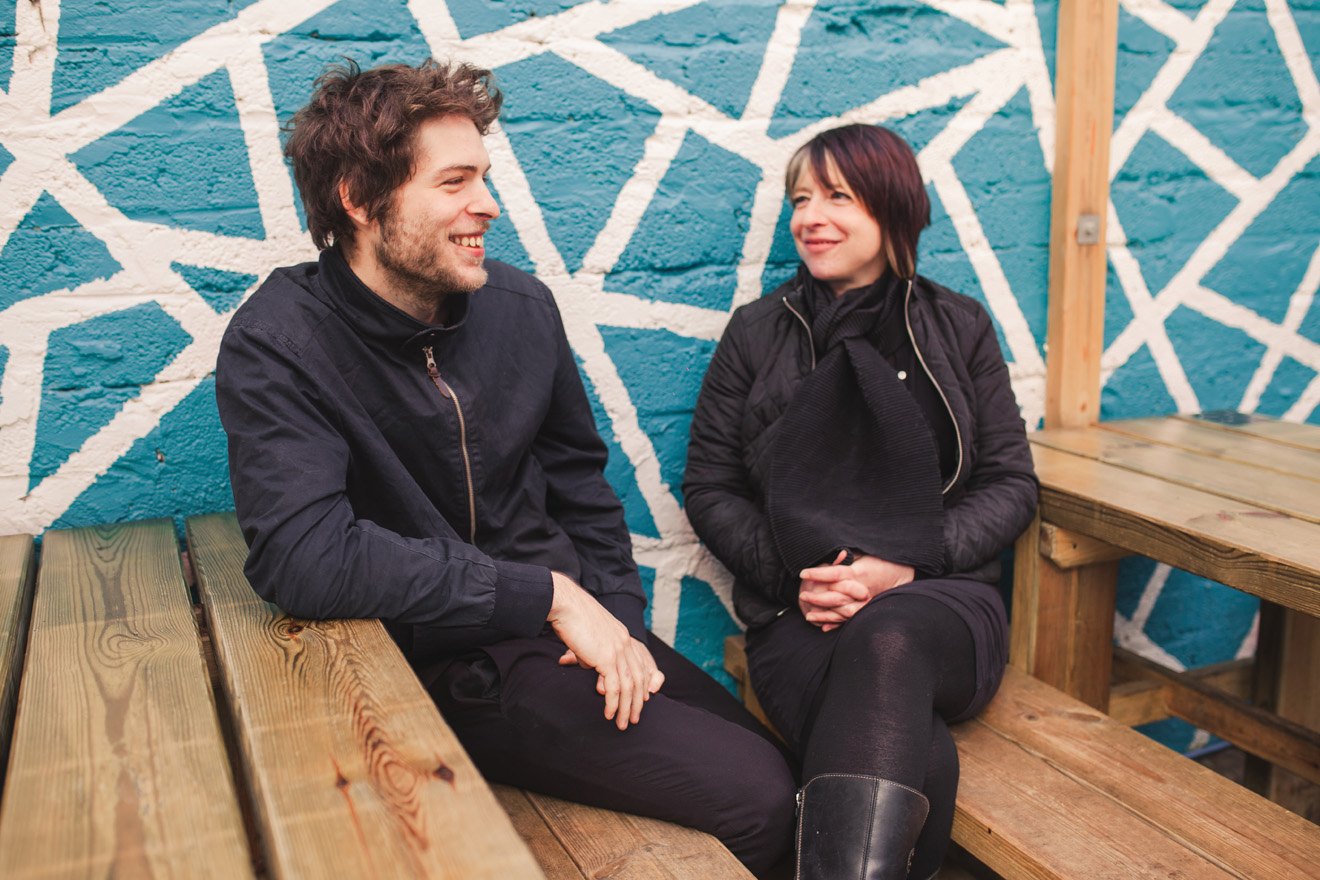 “There are about ten million genres now. Back when I started out you were either raving to it or you weren’t,” recalls Sim Simmer, original MC of Spiral Tribe and now one half of DJ duo The BadGirlz. “You wouldn’t go to a ‘drum ’n’ bass night’ or a ‘progressive trance night’ – there wasn’t even a genre [listed].”

Her musings may be fuelled by the vast range of genres her 23-year-old son, Charlie, loves to experiment with in his music production. Techno, drum ’n’ bass, progressive tech-house, acid, breakbeat, neurofunk and psy-breaks are just a selection of the styles that feature in Charlie Kane’s discography. “It’s probably suicidal from a marketing perspective,” says Charlie, “but I like a lot of styles of music, so I make a lot of styles of music.”

More commercial labels may have been put off over the years due to his mixture of styles, but in the underground scene Charlie’s been making a big impression since he was 16. Having grown up around electronic music technology, he’s developed an intuitive skill for live sets and sound design. His new album, ‘The Elastic Church’, will be out soon, featuring an atmospheric soundscape that echoes film scores, retro computer games and, yes, early warehouse raves.