In a short space of time the club was the talk of Beirut, springing up from virtually nowhere to become a hub for those seeking out underground vibes in a carefree space. From there, Ali and Nemer took a huge stride into the world of clubs, investing their money into a plot of reclaimed land in the swish port area of the city, where an outdoor garden became their first large-scale project. During their debut season, they flew in Apollonia for the opening, and had Nicolas Jaar, Seth Troxler, Damian Lazarus and Dixon among others to establish the club space as a go-to destination for the city’s party-hungry crowd.

Lebanon’s liberal culture has produced a generation of party kids who are increasingly malleable when it comes to music, and überhaus is their school. “überhaus was a game-changer for everyone. We reintroduced the concept of a dancefloor. Up until that point it was mainly table service in Beirut. We started educating people, by easing them in slowly with the soulful sound and the disco sound. People here had become used to commercial music so we had to guide them towards the darker, techno stuff,” Ali says. The team patiently cultivated a culture of trust with their clientele, who would still come to the club when the headliners were new to them. Key to the booking policy is Marwan Abousham, a man whose life’s quest, it seems, is to search out, discover and share new music and artists. He runs a visual blog called Cottonmouth and an accompanying mix series, which is full of chilled-out podcasts from a selection of relatively unknown, but incredibly talented artists. 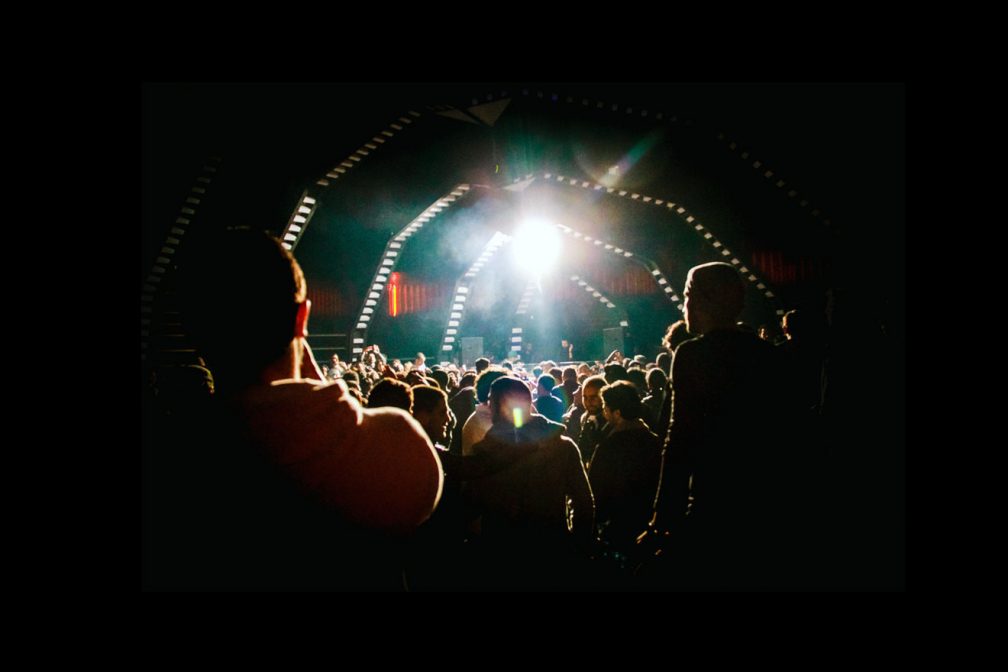 The space they have built, the brainchild of Nemer, is like nothing else on the planet. Modelled on the skeleton of a blue whale, überhaus is comprised a row of metallic black arches. On the inside of each segment are light fittings, which can be lit up in a variety of hypnotic patterns. The entire structure is surrounded by 56 shipping containers and at times covered by a removable steel roof. Each container has been modified to improve the acoustics inside the 2500-capacity club, treated with perforated metal sheets on top of insulation to soften the blow of the music pumped out by a four-point Funktion-One system. The DJ booth is moulded from four tonnes of concrete, making it a dream for vinyl selectors. And the whole thing took just two weeks to construct on-site, at a cost of over $1million.


On the night Mixmag passes through, Bristol favourite Eats Everything is pumping 127bpm techno into the belly of the beast and the crowd is full of energy. Eats himself beams from ear to ear as he powers through his set with the buoyancy of someone playing to a crazy crowd for the first time. He later posts a video to his Facebook page describing it as “One of the best clubs I have ever played.”


The entire structure is temporary, and will soon be broken down and packed away to make way for the summer venue, called The Garten. As the name suggests it’s surrounded by trees (more than 100 of which Ali and Nemer bought), with grass underfoot, chill-out areas and the main structure an open-air hexagonal dome. Both structures can be transported anywhere in the world, a deliberate move in case they one day lose the space where the club is located.

“Our target is to compete on an international level, not a local level,” says Ali. “We travel a lot and, naturally, we’re inspired by the parties and festivals we visit. We want to be on a par with the international scene and we believe Beirut is the hub of music in this region, so we need to make everything the best it can be.”

The space has become such an integral part of Ali’s life that he proposed to his wife, Farah, in the DJ booth and they got married at The Garten in the summer of 2015. “Out of all my friends from uni, I’m one of the only people who is actually doing something they love. Being able to own a company that entertains people… man! We hit the jackpot!” Nemer beams. “Überhaus gave us the opportunity to be happy.”

Überhaus brought the dancefloor back to Beirut, and it seems the dancefloor gave the two men behind the club a chance to really unite their friends, boost the city’s ailing nightlife and change the perception of Lebanon. Safe, secure, liberal and permissive, Beirut could soon be an essential party destination once again.