It’s a sunny afternoon in the south of England during the height of 2019’s summer season, and a group of rebels are embarking on a plan to raid and overthrow the headquarters of the UK’s wealthy bankers and oil tycoons. After successfully initiating many new revolutionaries to their cause, they use their numbers to topple this palace of corporate greed, halting the plan of the filthy rich villains inside to build a dome shielding themselves from an incoming environmental disaster.

OK, so the events described above did take place, but as part of the, let’s say, semi-fictionalised finale of this year’s Boomtown Fair, a captivating dramatisation of real world issues. The rebels in this case came in the form of Extinction Rebellion, a bona fide movement seeking to resist environmental disaster through non-violent protest and civil disobedience. The elites, however, were actors – a selection of the hundreds on site playing roles for Boomtown’s yearly exhibition of interactive theatre.

The serious implications of climate change came to the forefront of Boomtown’s storyline for the first time in 2018. The gargantuan closing ceremony saw artificial intelligence protagonist ‘AMI’ warn against the impact of leaving tents at the festival, while a dystopian drum ‘n’ bass soundtrack compelled the crowd into one final dance. This integration of real life issues and the pursuit of pleasure puts festivals, clubs, and music in a unique position to address the catastrophic threat of global warming. 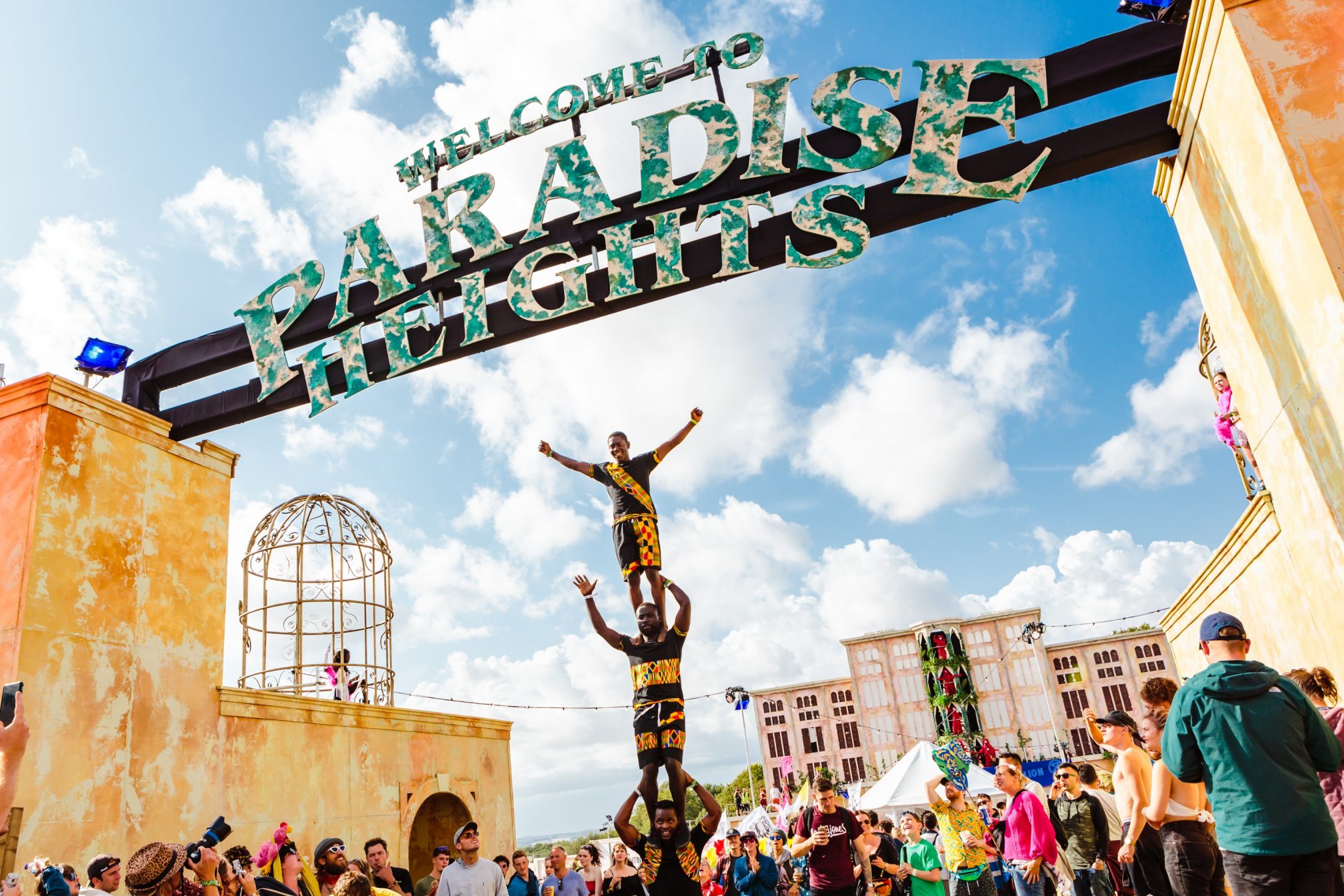 Whether we’re destroying the planet or our serotonin levels, the festival blueprint has, to a certain degree, focused around a hedonistic attitude. In the midst of an exuberant crowd, the thought of pushing through the throngs to find the nearest bin for your empty tinny may lose out to the temptation of a quick drop and leave it for the litter pickers. Maybe it’s the musical and (if you’re that way inclined) chemically induced intoxication that acts as a distraction from being socially responsible. After all, festivals are all about self-indulgence, right? Haul in your overpacked bags, set up camp, and turn off the real world switch for a few days.

However, in a world that has the Amazon rainforest rapidly burning away, and in which the President of the United States has denied our involvement in climate change, it becomes more important than ever for change to happen on both an individual and collective level.

Every industry takes a toll and holds its own responsibility when it comes to environmental impact, and as life goes on, action to minimise this is necessary. Festivals, promoters and event organisers around the world have been cottoning on to the gravity of our current climate crisis, and their efforts to blend music, the pursuit of pleasure and matters of sustainability are being reflected in the public consciousness. Notably, this year’s Glastonbury Festival was perhaps the most environmentally friendly edition since reaching its current scale. Despite its capacity of around 200,000 people, organiser Emily Eavis claimed on Instagram that 99.3 per cent of tents were taken home this year. An astonishing percentage, considering this is one of the key challenges for festivals worldwide. Earlier this summer, the Association of Independent Festivals (AIF), released a video explaining one tent is equivalent to 8,750 plastic straws.

Shambala is part of the AIF campaign, alongside 60 independent festivals, pushing festival goers to take their tents home, and the festival’s Marketing Manager Becka Whiteley tells me only six tents were left behind at this summer’s UK event from a capacity of 15,000. “It’s six more than you’d want but it’s still mega.” 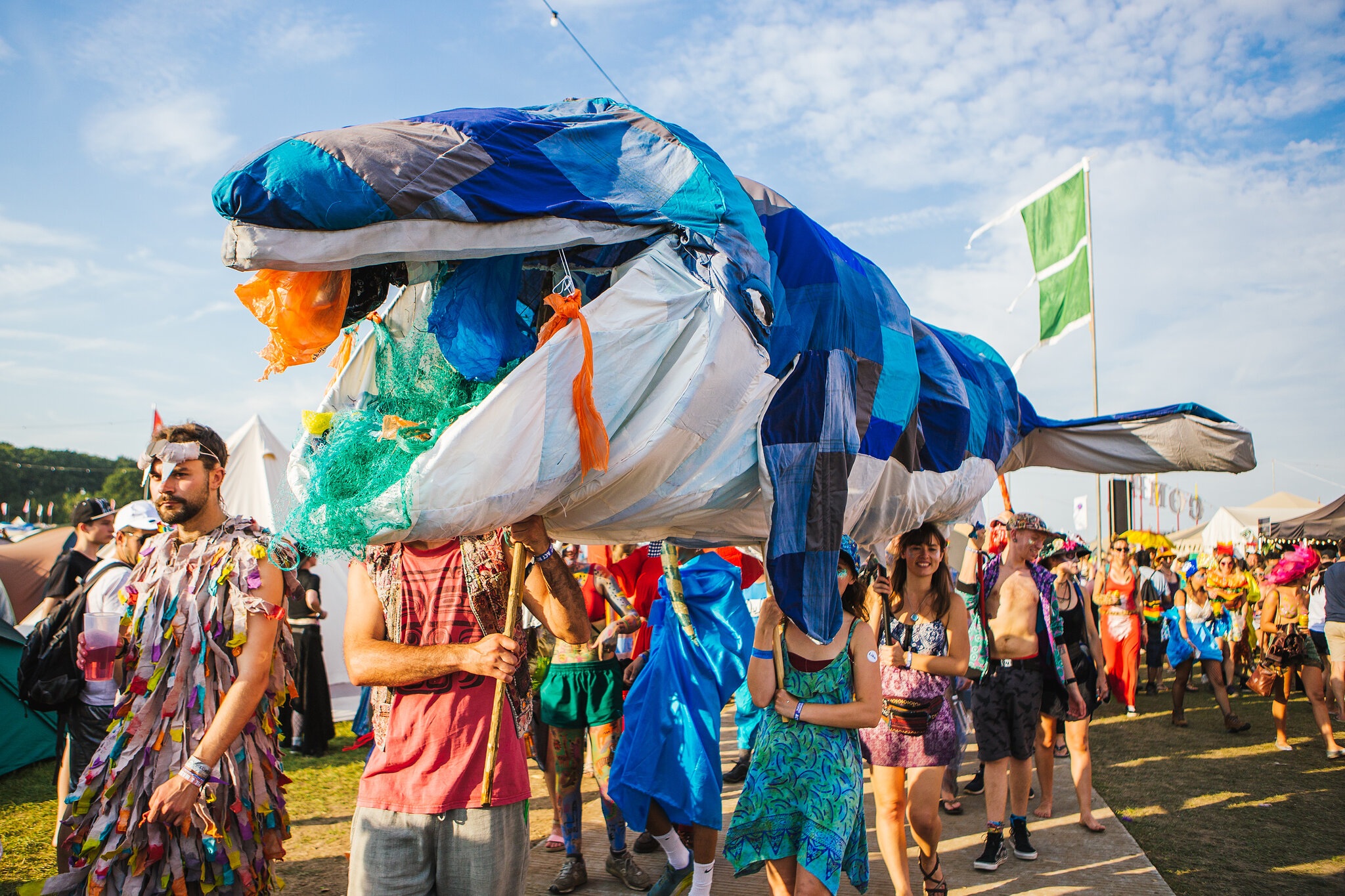 Being ‘green’ is not a modish add-on for Shambala. Sustainability has been built into the core ethos of the festival since its humble beginnings 19 years ago. However, like everyone else we spoke to, Becka agrees that the last couple of years have seen a huge rise in urgency on matters surrounding climate change. “As a society we have quickly and rightly moved from climate change being this vague existential concern on the horizon to being a very real, very present threat.” She mentions here the rise of the Extinction Rebellion movement, the 2018 IPCC report, and talk of entering into the sixth mass extinction event.

“Done rightly”, she tells me, “festivals are microcosms of society in which you can try and do things better, and then people can take that into their everyday lives.” The idea is not purely to reduce the impact of the festival itself, but to inspire change outside of the event.

“There's an example from Shambala which always springs to my mind for this. After we first went meat free [in 2016], we surveyed our audience afterwards and found that 52% of the people that filled in the survey said they had reduced their meat and fish intake. That was only a few weeks after. We caught up with them again 7 months later and found that 75% of them still drastically cut their meat and fish intake. It’s pretty mind-blowing.”

Shambala also takes carbon offsetting – the idea that an individual or organisation can balance out their carbon emissions through investment in counterbalancing schemes – seriously. These environmentally focused initiatives tend to revolve around creating and harnessing renewable energy, often in developing countries. Whether done on an individual level, such as offsetting taking a flight to another country, or on a wider reaching organisational level, offsetting is an important measure to help circumvent the negative impact of carbon emissions in situations when producing them might otherwise be unavoidable.

Shambala offset through the help of Energy Revolution, a not-for-profit organisation that aims to tackle one of the largest portions of a festival’s carbon footprint – audience travel. Energy Revolution has a travel calculator on its website that works out much you would need to donate to renewable energy schemes to balance out your journey to and from a festival. Shambala includes an offsetting charge in the vehicle pass for attendees arriving to the festival in cars and camper vans, and includes a donation option on the payment page for its regular ticketing. In 2016, more than £5,000 was donated, balancing more than 100,000kg of CO2 emissions. 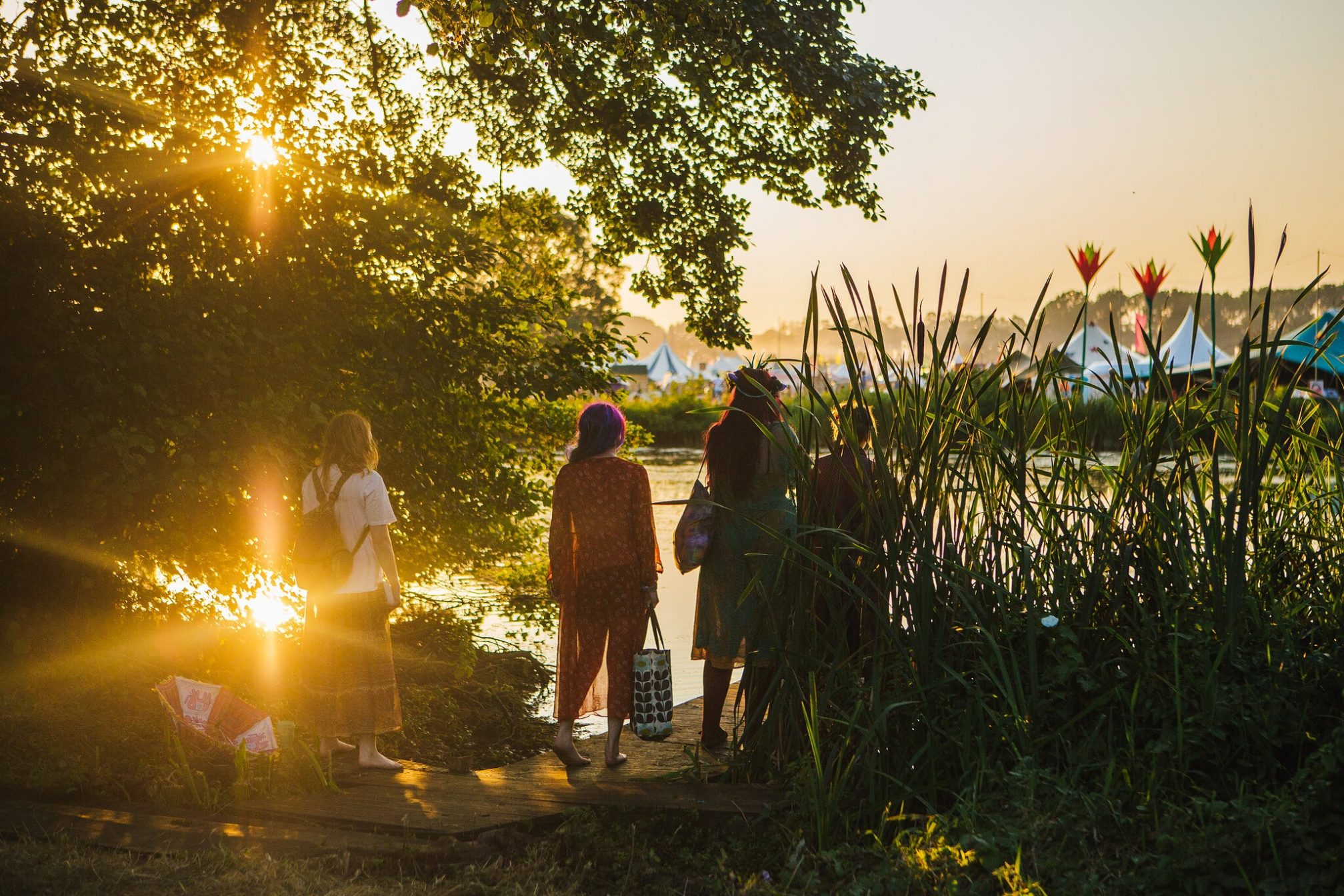 But while offsetting can go some way in counteracting emissions, it should be a last resort. “It's important to say that the ideal scenario, rather than just business as usual and carbon offsetting the emissions caused, is to cut them in the first place,” says Becka. “We do this by encouraging our audience to travel in the most sustainable manner possible.” Coach travel to Shambala is subsidised and guided bike rides from cities across the UK are offered, with a significant chunk of tickets reserved exclusively for coach and bike travellers.

Organisations like A Greener Festival (AGF), a non-profit that helps festivals and events around the world reach their green goals through a combination of sustainability training, discussion, and its celebrated Greener Festival Awards scheme, are also working to make the industry more sustainable. Claire O’Neill, a director of AGF, tells me the company “started to assess festivals with a very simple checklist back in 2007 - things like - Do you sort your waste? Do you use renewable energy?". Since then, she claims it has become an “extremely detailed assessment process where we have trained assessors all over the world.”

After a festival applies for the award scheme, AGF assesses the event’s local ecology alongside factors like the impact of its transport, power, waste and water. Awards of ‘Commended’, ‘Highly Commended’, and the highest prize, ‘Outstanding’ are up for grabs, and 35 festivals put in the hard work required to achieve an AGF award in 2018. The AGF also feeds back on how each event can further still improve its sustainability.

In March 2019, the non-profit also introduced the ‘green rider’ alongside the help of Paradigm Agency (formerly Coda Agency). The green rider seeks to increase communication between festivals, promoters, venues and artists, and help push towards a common agenda of sustainability by “reducing waste, eliminating single-use plastics” and “looking for locally, seasonally sourced food.” 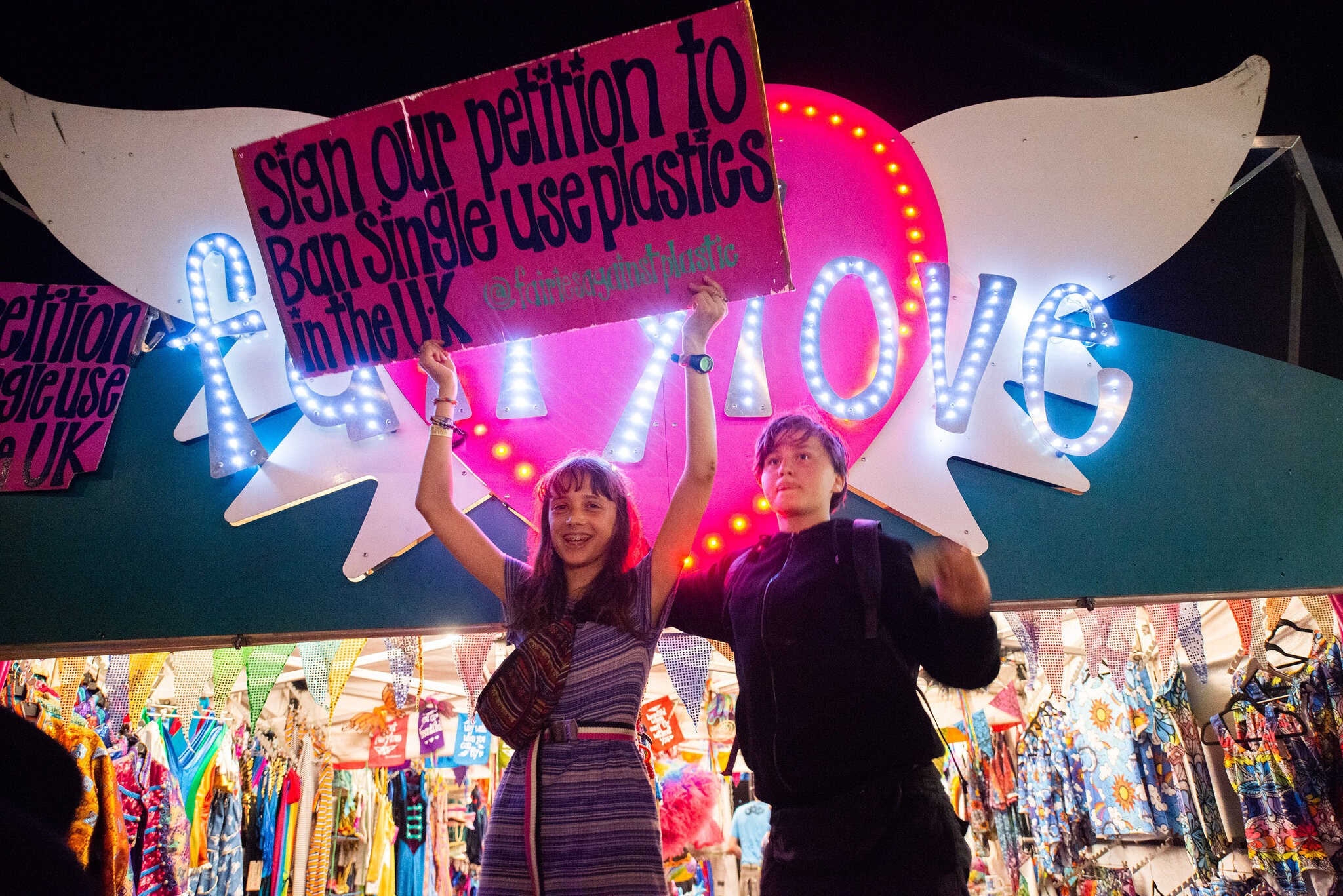 AGF initially launched in 2005, and Claire says the “last couple of years” have seen an “exponential increase in the amount of awareness and action from all directions.” She puts some of this down what is often known as the ‘Attenborough effect’. “I think that the easiest and most obvious thing to point to would be Blue Planet, certainly for the UK. That had a big impact with plastic awareness specifically.”

Read this next: The best ways to keep your Burning Man fashion eco-friendly

Earlier in the summer, Attenborough graced Glastonbury’s Pyramid Stage and praised the festival for ditching single-use plastics. A crowd of around 100,000 watched his speech on site, and it was also broadcast on national television in the UK, giving significant scale to the conversation around event sustainability.

The elevation of the conversation around sustainability is making a difference. Matt Streeter, co-founder of Brighton club night Materials who recently hosted ‘Materials: A Party for Climate Change’ at Patterns, was inspired by the plastic-reducing initiatives of London promoters Tail & Twist and venues Oval Space and Pickle Factory to make the party carbon neutral. In order to do this, Materials offset the club’s electricity for the entire night, offset artist travel and provided vegan/vegetarian green riders for the DJs. 50% of the profits raised were also donated to climate change charity Julie’s Bicycle.

“We appreciate the fact that we can't stop carbon emissions being emitted, however, we can do our best to counterbalance those by investing in these carbon credits,” said Matt. “You can get these by putting money towards projects such as hydroelectric power development in Chile, afforestation across South America and Africa, and a whole load of other important schemes.”

He admits it will be an uphill battle to convince clubs to switch to renewable energy and more promoters to take an interest in sustainability – especially when there are margins to watch. “It's not cheap to offset emissions from travel, let alone emissions from a whole nightclub that is consuming a huge level of electricity. It’s something new promoters may not be able to factor in yet, but others may not even be aware it’s an option.”

As awareness levels rise, the effect can only be positive. From Attenborough talking of the alarming effects of plastic at Glastonbury to Boomtown blending real-world climate issues into its evolving, fictitious storyline, the conversation is building. Events like these are leading by example by building environmental issues into their core. Their actions are shifting opinions on climate change and encouraging the wider clubbing industry to take sustainability seriously.

“I think a really key part of it is the fact that it's being integrated where people have fun”, Matt tells me. “A lot of the stigma about caring for the environment is that it’s either expensive, difficult, or ‘it doesn't work around my lifestyle.’ However, with festivals, clubs, and music - it's really something people like. It's a luxury, and it's enjoyment. If you integrate that in there, I think it will really start to remove the stigma around how difficult having even a slight care for the environment is perceived.”