The many lives of Shovell, the heartbeat of house music - Artists - Mixmag
Home Latest News Menu

If you were inclined to search for the heartbeat of British house music, you could do a lot worse than start with Shovell. Although his job description might technically be percussionist, he’s so much more: part showman, part shaman; all rhythmic icon.

If you’ve never heard his name (or caught one of his many TV appearances), Shovell – Andrew Lovell to his accountant – is a longstanding member of M People, a guest at countless festivals, studio sessions and events and someone who works closely with Defected Records, where he is MC, party-starter and, indeed, drum warrior. But dig deeper and his story is such a perfect example of the redemptive powers of acid house that he could almost be its primary test case. His life has been one of incredible highs and terrible lows and, having survived all of that, he is still, remarkably, the same ebullient person he was when Mixmag first met him 25 years ago.

In the years before acid house’s rude arrival, Shovell was another under-achieving kid from the suburbs of London. He was asked to leave school at 15, and began working as a plumber for Lewisham Council. “When I was a plumber I would have my hand down a toilet pan or lying on me back putting on bath taps on council estates in Lewisham, and all I dreamed of was to be in a band, make one record and do a few gigs,” he says. His life changed one night when his friend Martin Davey took him to his dad’s fitness centre in Southwark and they discovered Shoom. He arrived in jacket, shirt and shoes to be confronted by a room full of dancing loons caked in sweat. “It was like I landed on another planet,” he recalls. “The music, the smoke, everyone in dungarees doing this dancing I’d never seen before. The first time I ever heard Martin Luther King’s speech over the top of a house track, on half a pill, I thought, ‘Does it get better than this?’ It changed my life: I walked in a plumber and came out a musician.”

He quit his job, and within months he was playing clubs, performing on Top Of The Pops and working in Ibiza with DJ Alfredo. If he was living the dream, it only became more surreal when he joined M People in the early 1990s, shortly before they won the Mercury Music Prize: “We’re flying first class to Australia, doing three nights at the Hordern Pavilion in Sydney, Mick Jagger’s backstage ’cos he’s a big fan of M People... it was ridiculous.”

For several years, Shovell lived the life of a pop star, constantly touring, partying and loving the life he was leading, the dream of being in a band fulfilled, the plumber’s wrench a distant memory. “I was an extreme character,” he says. “I’m a drummer: I’m Keith Moon of The Who, I’m Animal out of The Muppets, I’m John Bonham of Led Zeppelin. That’s me. That’s what we do. So I dived into that character.” 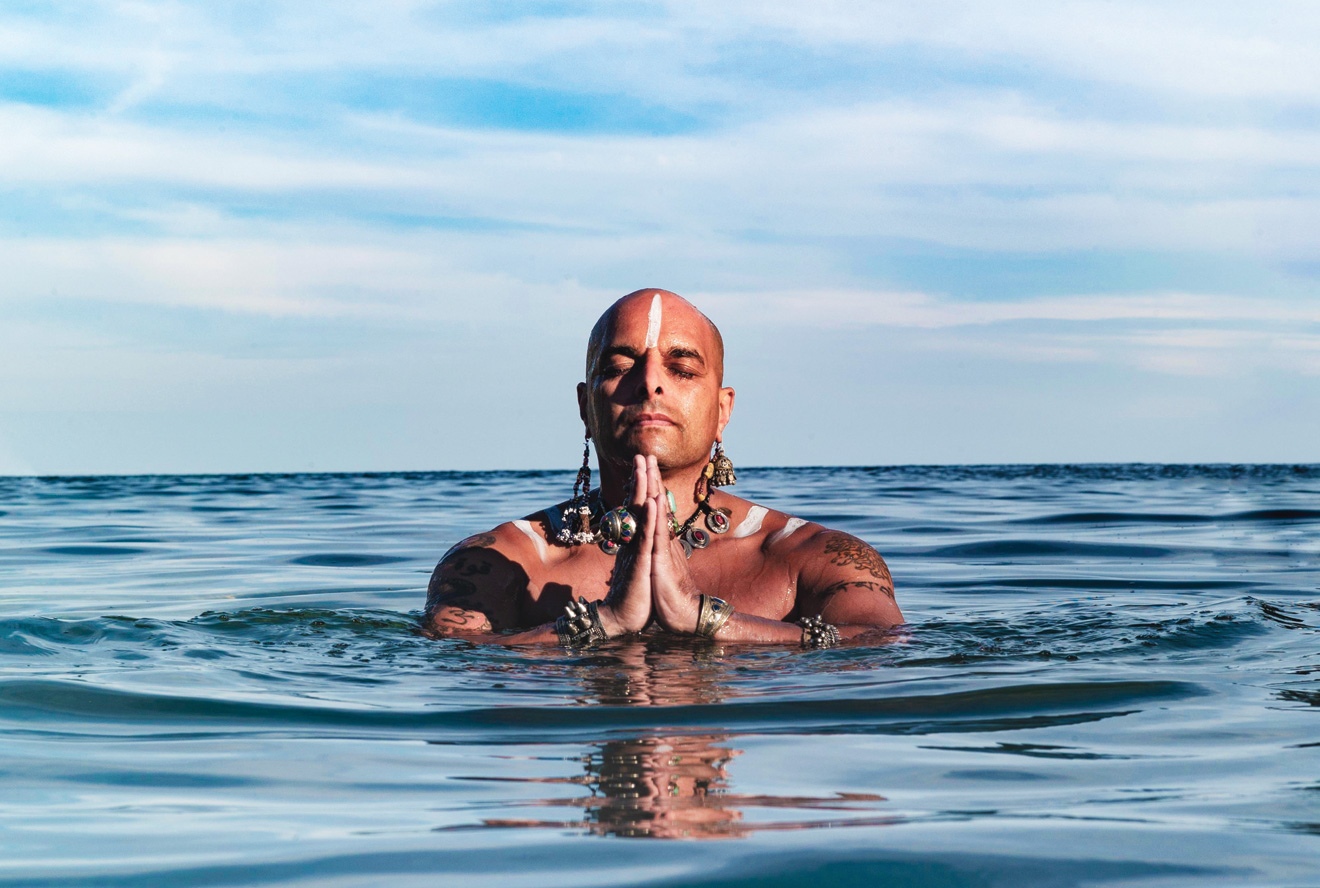 But behind the character he had created – Shovell rather than Andrew Lovell – was an intense feeling of distress. Raised as a black kid in a white family, he’d always been told he’d been adopted, but the truth was far stranger and more traumatising than even he could’ve imagined – so strange, in fact, that it became a tabloid story. During Christmas 1998, at the age of 33, his family revealed the truth: his ‘adoptive’ mum was, in fact, his birth mother, he’d been the result of an affair, given up for adoption and then adopted six months later by his real family (his mother’s pregnancy was explained as a stillbirth). The truth was more fucked up than any fiction. “It spun me out,” he confesses. “That year, I drunk more than I’d ever drunk before. I did more gear than I’d ever done before. I was angrier than I’d ever been before. But I didn’t have the wherewithal to connect that to the incredible shock.”

Almost exactly a year later, during a studio session in Manchester, Shovell had a breakdown. Somehow, he drove back down to London where he “was just lying there sweating and wailing. I was shocking myself with what I was doing and the noises I was making. And then – this is my truth – there was black smoke coming out of my stomach.”

From this low, Shovell gradually clawed himself back into some semblance of normality. He took up yoga, became a vegan – “I’m Arsenal, mate, I thought vegans were on Star Trek!” – began running and doing boxing training. He became a Buddhist. He even built a new career as a TV presenter, employing his natural gift of the gab on numerous football shows.

But the role of the drum in dance music is something primal and ancient. For thousands of years we’ve been answering to the call of its rhythms, from primitive man dancing in the half-light of a scarlet sunset to the communal euphoria of early raves or the pyrotechnics of Ibizan dancefloors. Shovell instinctively felt that call: the music summoned him – especially its rhythms. “The drums and the music took on a massively deep, spiritual, healing, ancestral, momentous, infinite, eternal meaning,” he explains.

He was coaxed back into the scene by Defected headman Simon Dunmore, though it was the act of drumming itself that offered solace and salvation. “I know this may sound bonkers,” he laughs, “but they’re my family: the congas, the bongos, the timpanis. They’re like a little barrier. It’s my island, it’s my world, and without using substances I can just be there and play. It’s beautiful.”

Read this next: Tony Pikes' life of hedonism

“This is tribal, and we’ve been blessed and given it by the ancestors"

Encouraged by collaborators like Nightmares On Wax’s George Evelyn, his growing persona as Drum Warrior became more pronounced as he started to garland himself in feathers, face and body paint and ceremonial clothing, and invoked the spirits of house music aided solely by Latin percussion and a new-found spiritual quest. “Fundamentally, what we’re doing is dancing to a beat of a drum,” he says. “This is tribal, and we’ve been blessed and given it by the ancestors. It’s a gift of the universal rhythm the ancestors sent us, and in Ibiza, in particular, and in all them clubs and bars that beat is going twenty-four seven for five months every year.”

Shovell’s quest, his thirst for progression and new experiences, goes well beyond simply banging some bits of skin with sticks and entertaining clubbers – though that’s important too. He’s a qualified celebrant, a Somatic Experience practitioner, a drum and sound therapist and he’s now been drink free for nearly 10 years. After suffering terrible back problems, he was introduced to the power of cranio-sacral therapy and spent two years training as a therapist before moving to Ibiza to set up a small practice there. While living on the White Isle he studied shamanism and tried ayahuasca for the first time during a ceremony, after which he found himself living in the Amazon jungle with an Ecuadorian shaman. “Whoa, that was tough,” he says. “No electricity, no running water. So it was pitch black and we were in a tree house and I heard ‘Bluurghyaya!’. ‘Who is that?!’ It’s [the shaman’s] mum. ‘Umum blurrgh!’ And these feathers, and he’s sitting there like that, and she’s like, ‘Blurgh!’, and I’m like, ‘Oh my god. This is black magic. They’re going to kill and eat us’.” Thankfully for the rhythmically inclined, they didn’t – and our hero had yet another of life’s genuinely transcendental moments.

So next time you see Shovell, all feathered up and triballed to the max, know this: he hasn’t lost his marbles and he’s not in fancy dress. He’s carrying on a tradition that goes back thousands of years. In a former life, he was the witch doctor or the shaman or the priest, but in this secular day and age he might be considered an MC or party-starter. But know this: he’s the embodiment of a practice as old as humanity itself. “Nobody necessarily needs to know what I’m doing,” he says. “But if they ask, I’ll tell them. If they just see a nutter burning a massive bit of sage and blessing the crowd and blessing the sky and blessing a drum, they’ll think, ‘what’s he doing, this fella?’ It’s not me blessing them, it’s the universe that’s coming through and delivering the blessing. I’m the deeply rhythmical, spiritual, ancient heart of a very modern, technologically-based environment.” And the beat goes on.