A spotlight beams down on Sampha as he stands on stage at south London venue Electric Brixton. He’s the centre of attention, unfamiliar territory until recently, his hands grasping the microphone as though he’s using it as a crutch so he doesn’t feel alone with all those eyes on him.

If he feels exposed it’s understandable. Prior to 2016 his only live performances came as a featured artist, predominantly with producer SBTRKT, his face half-hidden behind a tiki mask. But now, as he tours his debut album ‘Process’, a 10-track collection of poignant, piano-backed soul, it’s his name spelled out on the venue’s light box and there’s no headwear to hide behind.

“It was really weird,” Sampha says of his early shows, a slight whistle on the ‘s’. “Talking to the crowd was really difficult at first, but I got more into it as time went on.” We’re in an east London café a few days before Christmas and the Patta fleece he’s wearing and a package covered in Patta tape beside him implies the ultra-hip Dutch clothing brand has given the vocalist an early festive gift. He’s sporting a neat moustache which channels The Great Gatsby villain Tom Buchanan, but his overall look oozes 90s neo soul. His well-built frame belies his voice, which is as delicate and dulcet in conversation as it is in song. Of his first live shows – including one at London’s Corsica Studios and stops in San Francisco and Los Angeles – he tells us: “people were just overwhelmingly positive.” 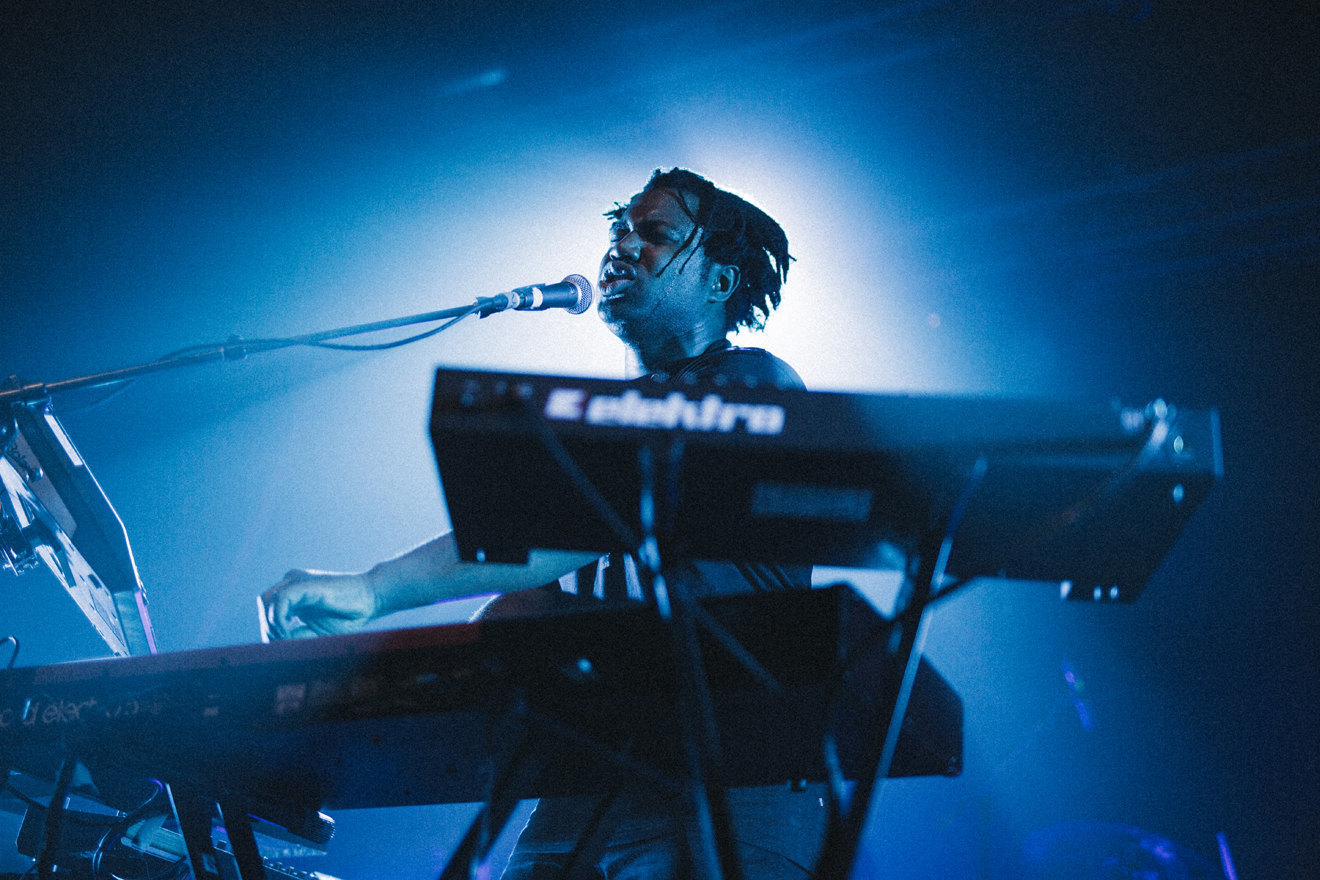 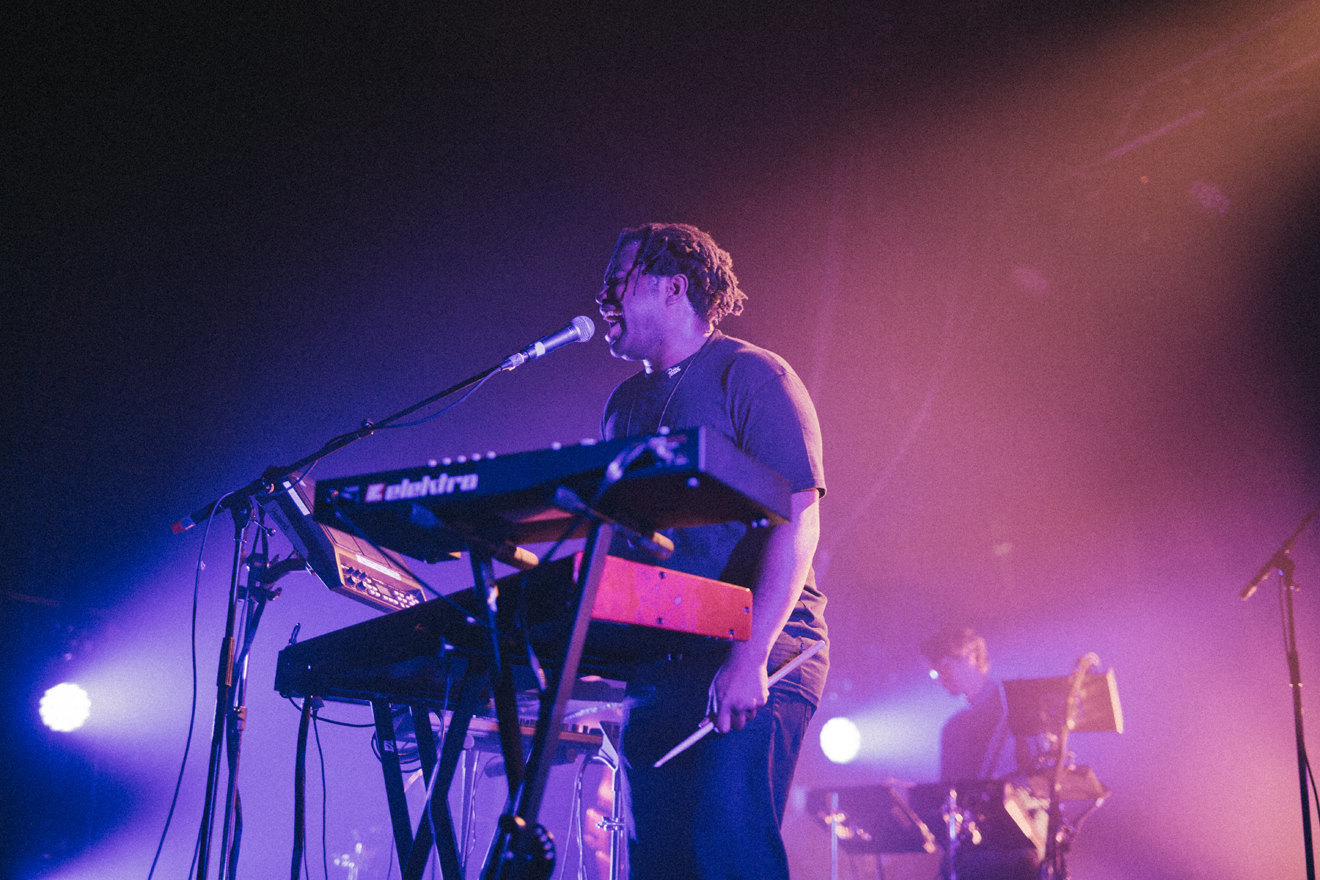 So much so that, during a brief silence at the sold-out Electric Brixton, just over a month after the start of his tour, a laddish shout of ‘Gwaan Sampha!’ booms from the crowd. Though the 28-year-old, simply dressed in a charcoal pocket T-shirt and black jeans at Electric, says he’s “acclimatised” to being the main focus now, there’s still a sense of unease about him on stage. But that shyness disappears when he performs ‘Timmy’s Prayer’ with his four-person band, which includes singer and cellist Kelsey Lu who’s also been his support act on tour: it achieves the same level of crispness live as it does on record.

The fragility of his lyrics (“And when I’m left without your love / It could feel like a lifetime, baby”) mirrors the vulnerability of his unique, husky voice. Along with his vulnerable presence on stage, it feels like it could crack at any point. But it’s that brittleness that emphasises the content of his sorrowful songs. People well up with tears watching him live, and he manages to stimulate shivers and goosepimples in a way no other vocalist is doing right now.

The son of Sierra Leonean parents, and the youngest of five brothers, Sampha Sisay grew up in London’s Morden, six miles south of Brixton. He’s the only brother who wasn’t born in Sierra Leone, but says that watching his uncle’s collection of Congolese music videos instilled some sort of African connection in him as a child. It was in the family home his fingers first hit the piano bought by his father, who died in 1998 when Sampha was just nine. You’d be forgiven for thinking album track ‘(No One Knows Me) Like The Piano’ is a tribute to the instrument, but it’s a heartfelt ode to his mother, Binty, who passed away in 2015 after a battle with cancer which started in 2010, disappeared in 2012, but returned in 2014. “The more time that passes, the more I see the extent of her love for me,” he wrote when unveiling the track. At the Electric gig his band departs the stage for it, leaving just Sampha and his keyboard in the neon blue-lit haze. It’s such a personal record (“You took hold of me and never, never let me go”) that anyone else’s involvement would lessen the impact. The room stands in silent awe; only a whisper of “this is mind-blowing” breaks it. 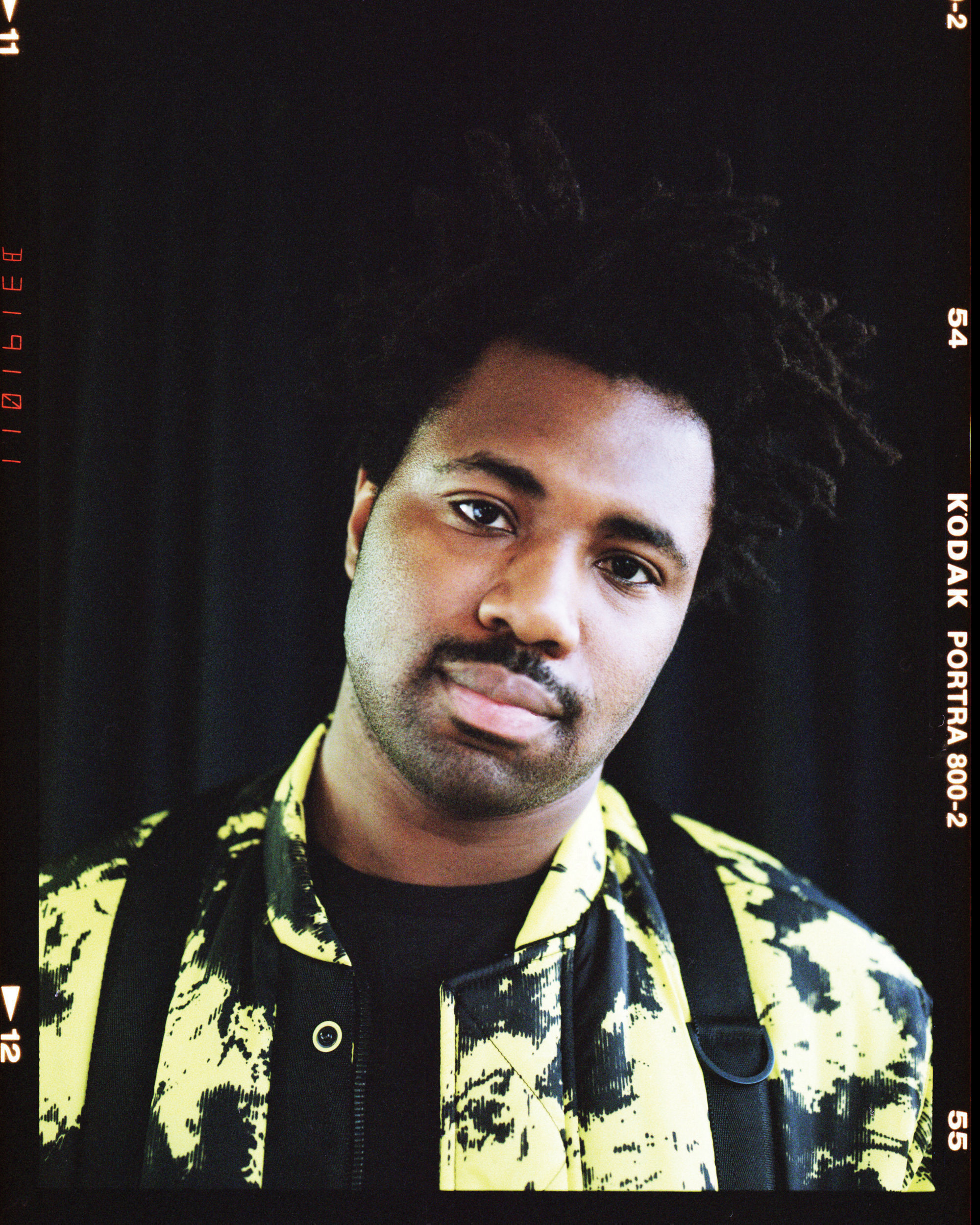 Co-produced by Rodaidh McDonald, XL’s in-house producer who has worked with Adele, Bobby Womack and The xx to name but a few, Sampha’s album got the name ‘Process’ because he “had a lot to process these past couple of years… and it’s hard to articulate sometimes.” That difficulty returns when we ask what it was that he was working through. Sitting tensely, with his arms close to his sides, he pauses, looks out of the window as he gathers his words, then turns back to us with his response.

“A lot of it was me dealing with being the Sampha guy that’s portrayed. Getting to the point where I feel like I want to make an album and being comfortable with my vocal being the main focus.” He picks his words carefully, breathing deep between sentences. “And also, the things I’ve gone through with my mum and my brother [his eldest sibling suffered a serious stroke in 2015] meant that I had to step back from music and reassess everything. So when I listen to the album, I’m very much transported to particular times and feelings or places and spaces.”

It was caring for his mother and brother that led to a solo release-free spell of three years from 2013 to 2016. Prior to that, he’d introduced himself as a producer (the ‘Sundanza’ EP in 2010), before realising his true vocal potential with seven soothing features on SBTRKT’s debut album in 2010. The ‘Dual’ EP came after that, followed by the release ‘Too Much’/‘Happens’. Those heart-wrenching tracks turned out to be his last solo material until 2016, but there were a host of high-profile features, including ‘Too Much’ and The Motion’ on Drake’s 2013 album ‘Nothing Was The Same’, having been invited to join the rapper in Toronto.

“I was a little bit intimidated, but that’s probably because every time I met [Drake] – so three or four times – I’ve been jet-lagged and super tired,” he says, laughing. And what’s it like to work with the famously morose ‘biggest rapper on the planet? “He’s pretty serious, but I think he’s learned how to make fun of himself. He’s definitely found his confident voice.”

On the subject of rappers with confidence, Kanye West got Sampha on board for ‘Saint Pablo’ last year through the assistance of rap super-producer Rick Rubin. “It was a lot calmer than I thought it would be,” he says of the LA studio session. “There were moments where he would be quite loud and forward, but a lot of the time he was quite quiet and introspective. It’s like, ‘This is why this guy’s…’ you feel the aura. Just like a crazy kind of energy.”

The two biggest rappers in the world (and Frank Ocean, with whom he worked on visual album ‘Endless’) might be crossed off the bucket list, but it was working with Solange on the empowering ‘Don’t Touch My Hair’ that left the biggest mark on Sampha. Detailing the four-year project that saw him travel to Accra, New York, New Orleans and Houston, he says: “She made me feel part of something, part of her development. That was an album [‘A Seat At The Table’] I listened to and felt very much a part of.” At the end of last year he joined her for an elegant and assured performance of ‘Don’t Touch…’ on long-running US variety show Saturday Night Live, inviting Radio 1 DJ Benji B along. 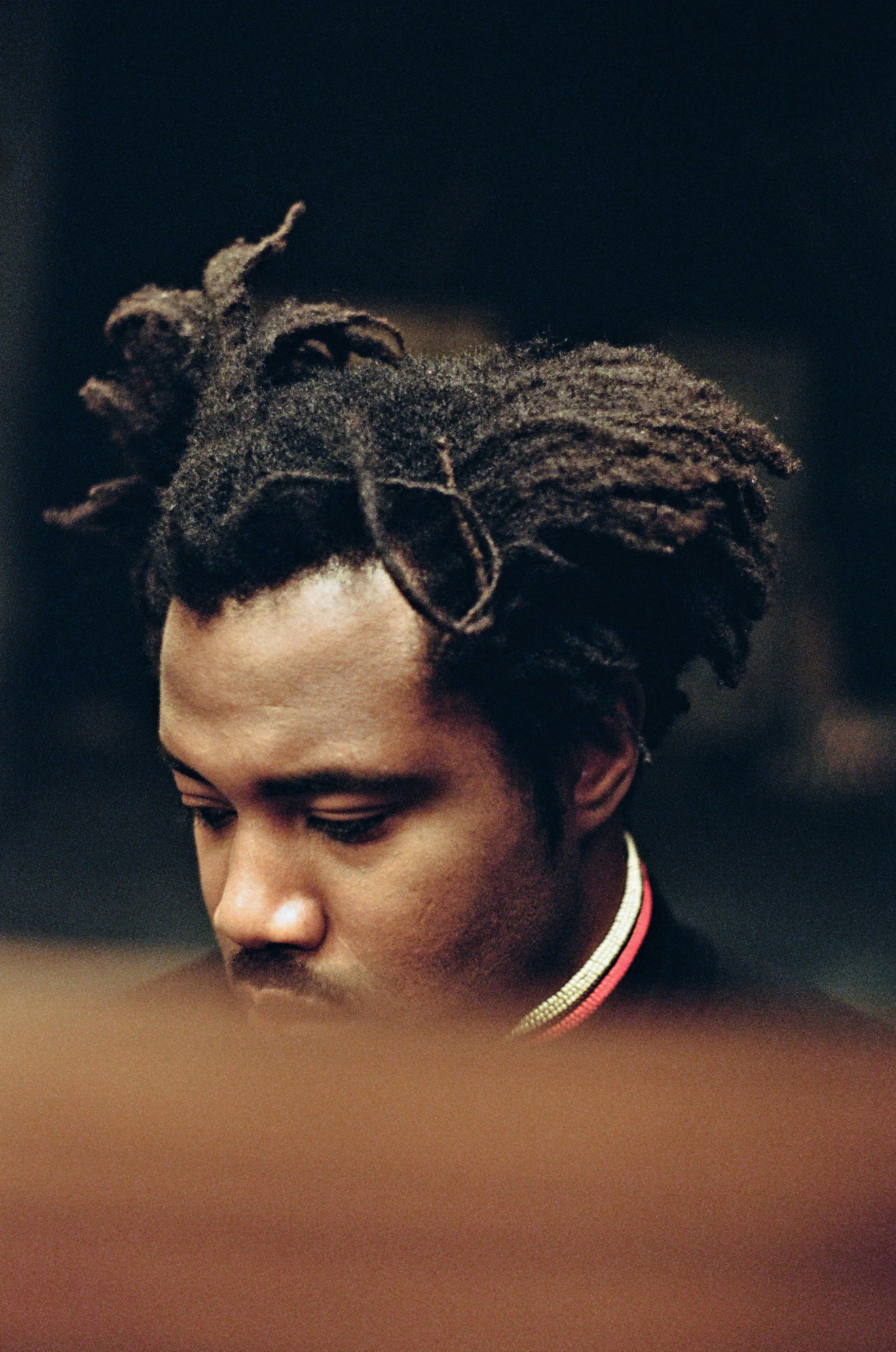 “Even in an environment like that,” Benji tells us, “surrounded by absolute titans of US showbusiness, from Alex Baldwin to Jay Z, he absolutely smashed it. Afterwards, he just walked into the New York night with his backpack on. He’s like a superhero – a very humble superhero who’s also one of us.”

SNL wasn’t his first appearance on Stateside TV. Drake took him along to Late Night With Jimmy Fallon in 2013, and last September he went on The Late Show With Stephen Colbert to debut the intense ‘Blood On Me’, a track that metaphorically uses a car to symbolise how he felt unable to steer his life at the time of writing. “I’m on this road now / I’m so alone now, swerving out of control now / And I crash the whip…” it goes, that incredible voice pushed to a level we’ve not heard him reach before.

“That was me drawing back from my early 20s when I was engulfed in a new territory and I felt like, ‘Why is this all happening?’” he says. He’s a little more relaxed now than he was before. “I’ve always been someone that needs a bit of solitude, but then it’ll get to a point where I need people. ‘Blood On Me’ was harking back to that.”

It’s unlikely he’ll get much alone time in the coming months. Having just finished a six-stop tour of North America, he’s got 13 UK and European dates lined up in March, two Coachella slots in April and a five-date tour of New Zealand and Australia (including a sold-out Sydney Opera House) in May.

While he reckons he might be “naïvely thinking that things won’t change that much”, Sampha’s definitely no longer “the dude from the Drake track”, as oblivious YouTube commenters called him after his January appearance on The Tonight Show.

‘Process’ is out now on Young Turks