For thirteen years the Salon des Amateurs has been one of Europe’s most forward-looking and influential clubs, a hub for musical experimentation and vanguard DJ sets. However, from the outside it doesn’t look much, a glass-sided room set into the brutalist architecture of Düsseldorf’s Kunsthalle – the art museum – which rises above and around. It’s akin to the BFI café on London’s South Bank, or Birmingham’s Central Library. And at 2.30AM on a Friday night the area around is mobbed with marauding, drunken men and women, dressed alike in stag and hen fashion, all bellowing and shrieking.

The whole scene is overlooked by a four-metre-tall, bronze, bird-like, abstract sculpture of the Old Testament prophet Habakkuk, created in 1971 by Max Ernst, one of the fathers of Dadaism. It’s likely his surrealist sensibilities wouldn’t have been impressed by the tawdry predictability of Düsseldorf’s pissed-up nightlife, but if he were to enter the Salon, it might be a different matter.

The Salon is a small, simple space, entirely like the museum café-bar it once was: wooden dancefloor, black leather upholstered seating area, decks directly beside the bar. The staff are predominantly Georgian and keen for the DJs to share vodka shots. Long-term resident Jan Schulte is happy to oblige. Knocking one back while selecting music that runs the widest gamut, from 70s French disco outfit Space singing ‘Carry On, Turn Me On’ to recent modernist Gallic electronica from 45ACP, to DJ Crystl’s old 1994 jungle tune ‘Let It Roll’, the last played super-slow at 33.3. It’s an unusual selection, to say the least, but people turn up and head straight on to the floor without even buying a drink. And what a crowd, varied and energised, Düsseldorf night owls who reject the city’s endless ‘Oirish’ pubs and riverside drinking joints.

Two 20-something women in shoulder-padded jackets frug elegantly next to a man of about 55 in a tropical linen suit who dances with po-faced, frantic jerkiness. A woman who looks like a shamanic Beth Ditto waves her arms in the air beside a shimmying, snogging teenage couple, while a blond Viking biker chick in leather grinds against a man who looks like an alcoholic version of the film director Tim Burton. Mixmag has rarely seen a crowd embrace the musical leftfield with such abandon. 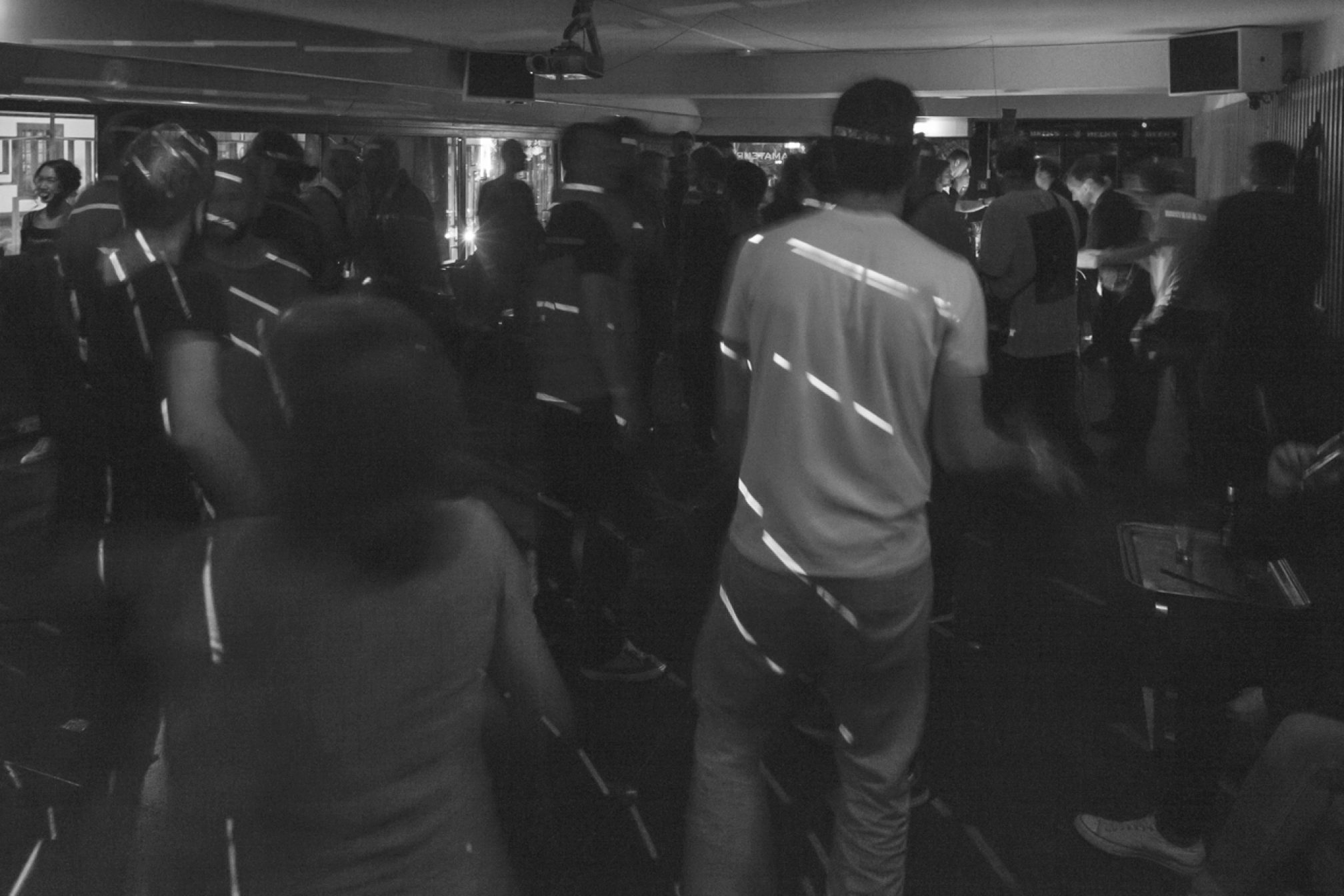 Five hours earlier and we’re sitting in the studio of Jan Schulte. This is where he’s produced a string of tunes under names such as Bufiman and Wolf Müller, as well as collaborative projects such as Montezumas Rache (with the Berlin Record Loft’s Christian Pannenborg) and the ‘Sound Of The Glades’ ambient album with Osnabrück producer Cass (Niklas Rehme-Schlüter) – the latter for Mark Barrott’s International Feel label.

Schulte, lightly bearded, in black jeans, trainers and white T-shirt, sits nursing a dark Schlüssel beer (made in Düsseldorf) surrounded by Spongebob Squarepants paraphernalia, bongos, old synths such as a Wersi Elektra CF-90, and records ranging from a WHAM! 12” to post-Krautrock fusion outfit Kraan. Behind him, framed on the wall, is a signed photo of 70s US avant-funk eccentric Gary Wilson. Schulte’s career is entirely interwoven with the spirit of Salon des Amateurs.

“The fact is that one of the reasons for the Salon’s success is that it’s more like an art space than a bar or club,” he says. “It’s never had the philosophy of trying to please the audience. Secondly, the club scene here is very, very small so at some points it’s been the only place you could go. This gave it power because everybody’s coming – but we still play what we wish. I don’t know anywhere else in the world that could play ImpLOG’s ‘Holland Tunnel Dive’ at peak time.”

The record in question is a New York 12” from 1980 that has deadpan lyrics, a Motorik rhythm and what sounds like a jet engine occasionally drowning everything out. But it wasn’t weirdness that sealed Schulte’s residency at the club a decade ago. He and his friends – the crew that would later form the Themes For Great Cities label – discovered the place by accident. It became their regular haunt.

“At some point, Detlef Weinrich [a sculpture alumnus from Düsseldorf’s world-famous art school the Kunstakademie and the man behind the Salon] asked me to play,” Schulte explains. “I got so crazy nervous my shaky fingers couldn’t even light a cigarette. I was trying to show off with rare records, but it was when I played Change’s ‘The Glow of Love’, a well-known American disco hit, that Detlef said, ‘That’s pretty cool.’ After that I played regularly. The Salon’s policy isn’t about playing just strange 90 BPM stuff; everything’s allowed if it’s done in the right way.” 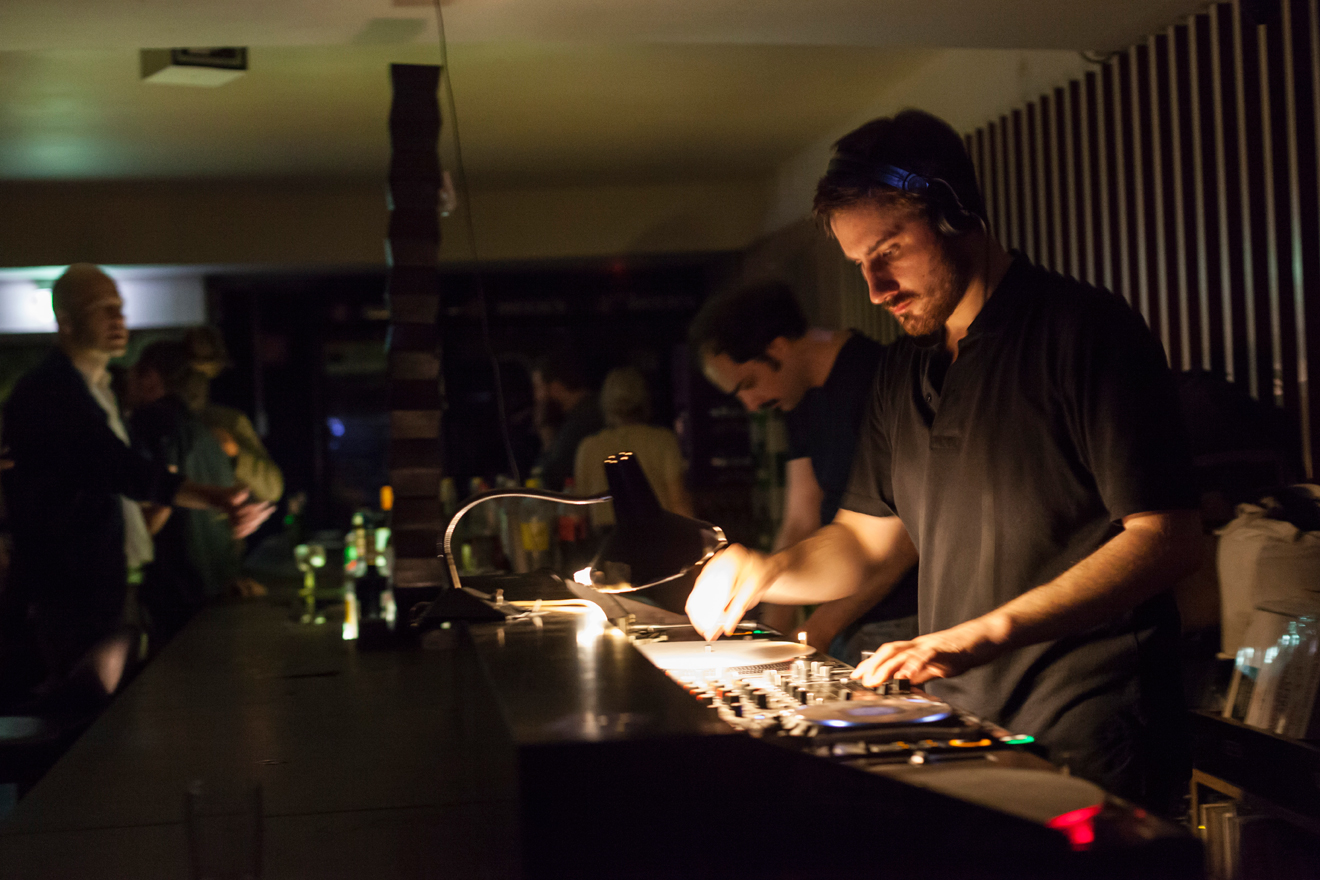 Weinrich’s band Kreidler, which was formed in 1994, has a hefty reputation for experimental art-pop, and, under the DJ name Toulouse Low Trax he provided the blueprint for the Salon’s music. Inspired by the city’s previous boundary-pushing, Kunstakademie-related clubs, Creamcheese in the 60s and Ratinger Hof in the 70s and 80s, he opened the Salon in 2004 with German-Ethiopian artist Aron Mehzion and their friend Stefano Brivio.

It soon gained a reputation as a place DJs could play sounds other clubs wouldn’t allow, pushing the envelope of what made people dance. Names such as Loco Dice, Willie Burns, I-F, Syncom Data, Hieroglyphic Being, Cut Hands and Tako Reyenga (from Amsterdam label Music From Memory) have all played off-the-wall sets there. But it’s the residents who, week in, week out, have kept the Salon on track. As well as Schulte and Weinrich, these include Vladimir Ivkovich and Lena Willikens, the latter a former Salon door-person who ended up playing every other Friday. All four are now in demand across Europe and beyond, taking the unique Salon sound to new territories.

“When I first went there,” Schulte explains, “clubs were all about techy drum ’n’ bass and clicky minimal house – it just wasn’t funky anymore. But the Salon was so different. The way Detlef plays music is just magic. He wasn’t mixing so much, just playing with emotional intelligence. An industrial track might be followed by a cosmic disco hit, but the feeling was just incredible. I’d stand in the corner and hide so I could just listen and not have to be social.”

"I was trying to show off with rare records, but it was when I played Change's 'The Glow of Love' that Detlef said, 'That's pretty cool.'"

When asked to pin down what exactly the Salon sound is, what differentiates it and makes its DJs in such demand, Schulte thinks for some time. Eventually he tentatively suggests, “There’s hypnosis in it, tribalistic; each of us experiments a lot with polyrhythms and rhythmic structures, a lot of African musical references, anti-melody elements, going more for sound colour.”

A definitive representation of one aspect of the Salon’s sound can be found on Jan Schulte’s ‘Tropical Drums of Deutschland’ album. These are tracks he picked up on vinyl from charity and thrift shops, all of which have become staples in his sets. They are ultra-obscure percussive releases on tiny German labels and private presses in the late 80s. Kenneth Bager approached Schulte to put a project together for his Music For Dreams label and ‘Tropical Drums…’ was the result, launching a new set of compilations entitled ‘The Exclusive Collector Series’. The cuts on it have a gutsy, organic pulse that comes from a different place to house and techno, yet has the same mantric, compulsive quality. Which is just how the Salon operates.

“They were mostly made by ex-Krautock heads, going into percussive jazz fusion,” explains Schulte; “They were aimed at a new age audience: hippies into esoteric sounds. Some of these tracks are trying emulate the rainforest or the savannah, and I like that too. There’s this feel of not having to deal with city life, leaving it behind to go to the countryside, though it’s not my idea to tell that story – in the end it’s just beautiful music that lit up my ears.” 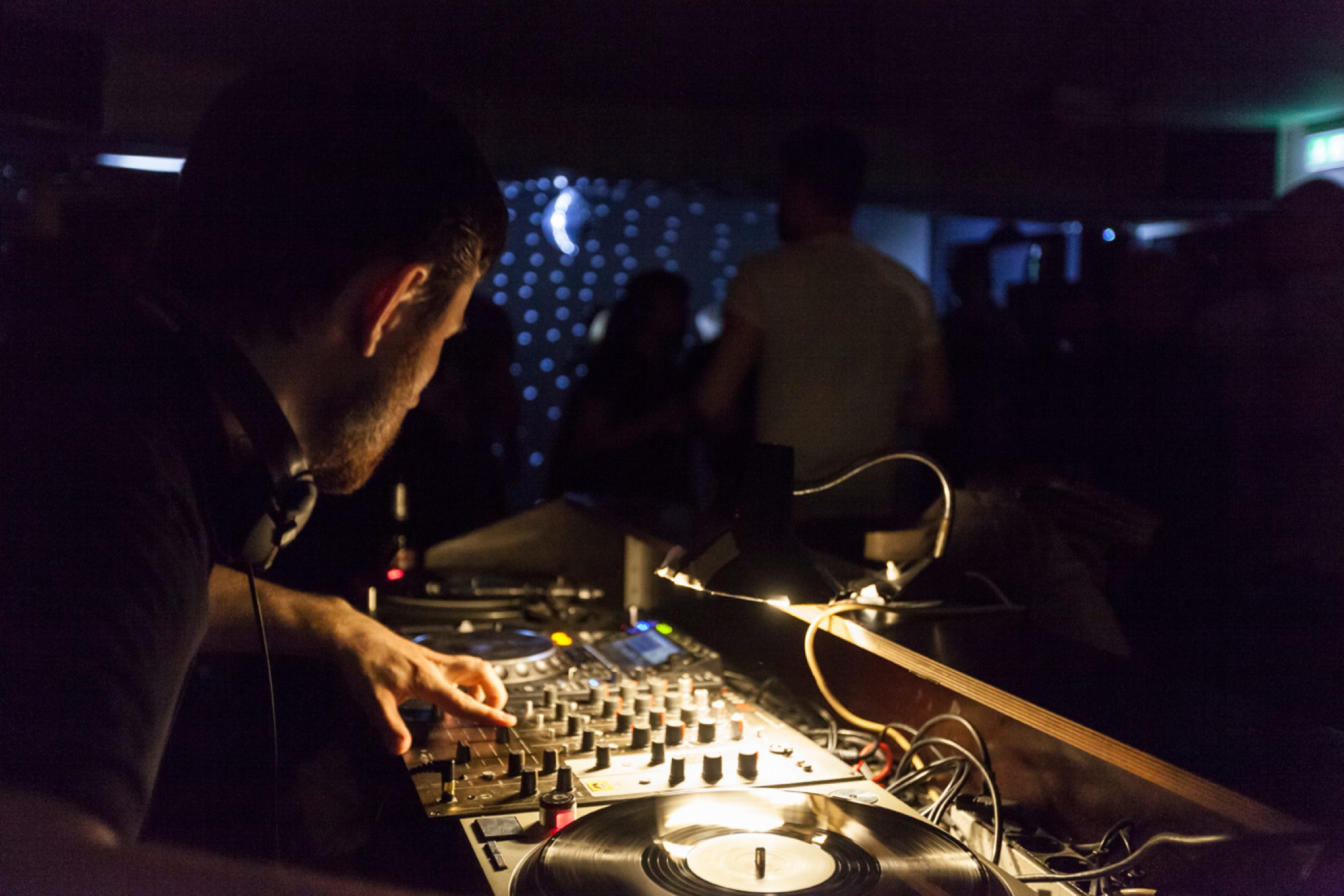 Schulte, born in 1986, was drawn to the sound of drums from an early age, an especially formative experience being a tape his father made him. One side contained funky, uber-long jams by Rare Earth and Blind Faith, and on the other, pieces by Talk Talk and of course local heroes Kraftwerk. “I sometimes think that cassette contains my whole musical background,” he laughs.

Aged 12 he started to program beats on his computer, and by 18 he was producing school friends who would go on to form Antilopen Gang, a Düsseldorf hip hop outfit who, earlier this year, topped the German album charts.Shortly after his involvement with the Salon he began to fire out productions, his most recent being Bufiman’s ‘Peace Moves EP’ on Dekmantel – and its experimental spirit has clearly been a huge influence. But there’s a fly in the ointment. Last year an underfloor section of the Salon was found to be waterlogged, and the venue will soon have to close to sort the issue out.

“The city owns the building,” says Jan, “and the city has to decide what happens. It will be a long process because, legally, they have to go through the whole process of putting any work out to tender. Also the city is not the biggest fan of nightlife. They see the Salon as a place of cultural importance but don’t really understand why it has these parties. Then again, the Salon has been open for over a decade and maybe when – or if – it opens again, there will be renewed interest and excitement about it.”

In the meantime, the DJs who’ve made it what it is – Jan Schulte, Lena Willikens, Toulouse Low Trax and Vladimir Ivkovich- are spreading the Salon’s sound like a tribalistic virus. On the decks this evening are the week’s guests, Phuong Dan & Jules from Hamburg’s Golden Pudel Club. They seem to have been playing the rhythm track to Kraftwerk’s ‘Trans-Europe Express’ forever, overlaying it with everything from African chants to twitchy abstract techno before switching into the sparse, gothic 80s alt-pop of Shriekback and something unhinged from Japanese musician Masumi Hara. And still the crowd dances like possessed dervishes.

This place is not as other clubs. The music of Salon des Amateurs will certainly go on, via those who did their DJ apprenticeships there, but Mixmag hopes this oddball home to so much juice and difference is also given another lease of life.