The Groot Handelsgebouw building – an eight-storey office block and an architectural symbol of post-war Rotterdam – is an odd setting for a night that showcases some of Holland’s leading underground DJs. But then the Suicide Club is an unusual night. Arriving on the eighth floor we exit the lift facing an open kitchen, food service still in full swing. Ambient jazz fills the air above the murmer of conversation and clatter of plates and glasses. With room for 200, the club is small, with a round bar, decorated in turquoise tiles, in the middle. Wrought iron modular shelving sits above it, a few sections filled with ornate stained glass. Warm, low hanging lights sit above the tables. So far, so gastro. Has this place really played host to the likes of Carista, Luke van Dijk and DJ Deeon (and tonight, local hero De Sluwe Vos)?

Doorhost Bella is the first indication that this is something more than a restaurant. Known for her vogueing, tonight her glossy hair is neatly pulled back into a ponytail, and she’s dressed in a bejewelled bra and long, black kimono-style jacket. An older, smartly dressed couple in their late 50s sit at the bar, a group of excitable English tourists who’ve clearly been there for a number of hours occupy a sofa and table in the corner and a younger couple stride in in their finery – he in smart shirt and trousers, she in ornate black evening gown and floor-length fur coat that appears to have been made from 1,000 minks. It’s a strangely glitzy crowd for this proudly industrial city.

Then there’s a sudden, abrupt change in the music, which becomes louder, drowning out the chatter. A deep groove with hints of Middle Eastern stringed instruments emanates from the speakers. Resident DJ Minors begins his set. He dreamily weaves Bedouin & Pattern Drama’s ‘Spiral Eyes’ with the hypnotic sounds of Parisian duo Amentia’s ‘Miracle D’Hwange’. The strip lights that run down the floor-to-ceiling windows flash between red, orange and blue, giving the room a club-like ambience. 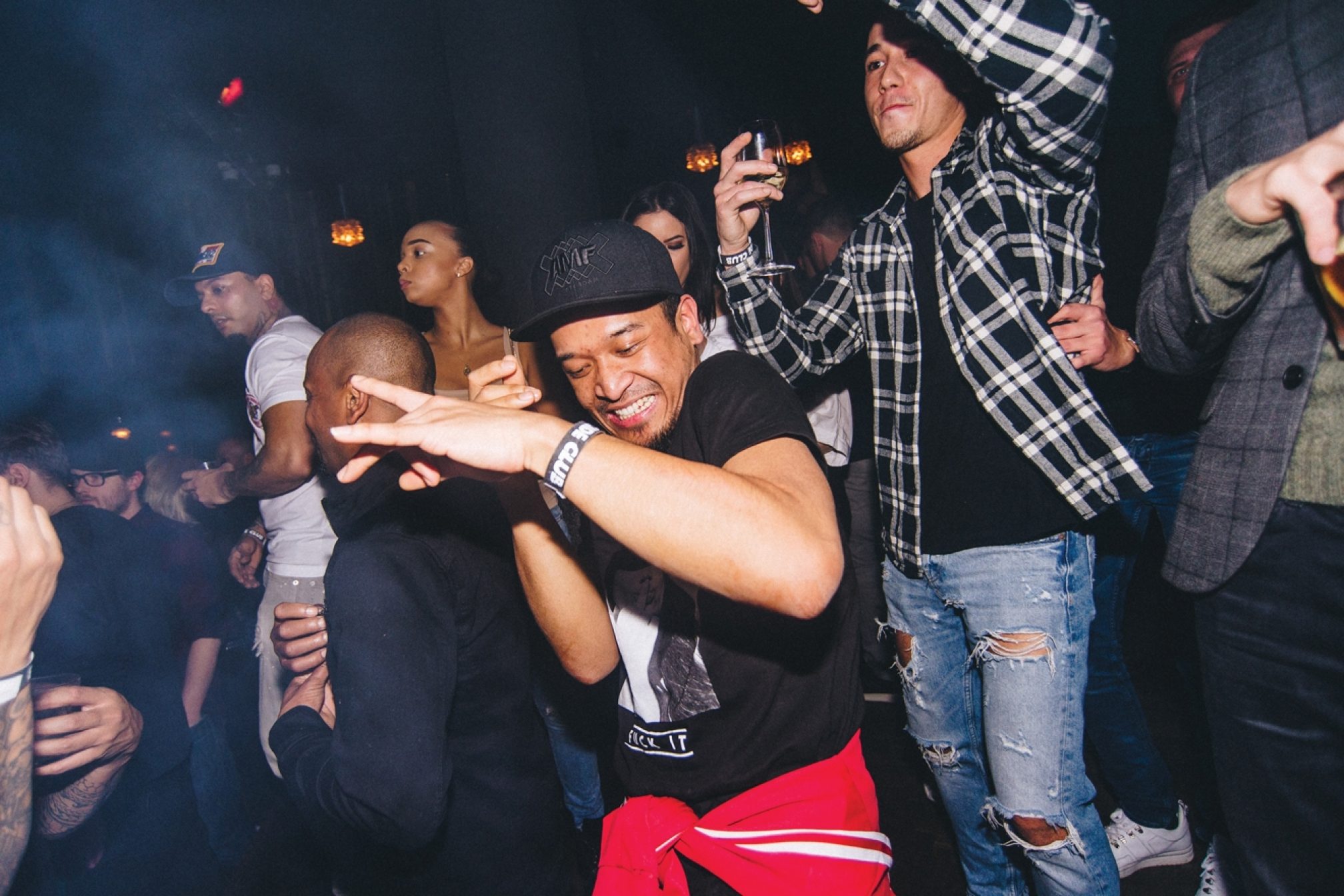 The floor fills up with club-goers standing in twos and threes, scanning the floor. They appear somewhat reserved. “Yeah, when I play abroad I always think, ‘Wow! People are losing their minds!’ Sometimes it’s really hard work in Holland,” De Sluwe Vos tells us before his set. We leave him to get ready for his set and take a walk out onto the terrace. It’s vast and wooden, flanked by heaters with dreamcatchers hanging from the rafters. Looking out over the city below, Rotterdam is clearly a city of two halves. To the right sits the harbour; the bridge and old town basking in the warm, orange glow of street lights. To the left, the new, high-rise glass-fronted buildings stand proudly symbolising the somewhat hotch-potch rebuilding of Rotterdam that has seemed a constant since much of this huge port was destroyed by bombing during during WWII.

Back inside, the room is now pulsating with dancing bodies. It could be the alcohol that’s loosened them up, or it could be the palpable energy oozing from De Sluwe Vos’ music and movements. The booth sits neatly between the main area of the floor and the raised stage. There’s a cage to the right of the booth where a voluptuous, bondage-clad dancer gyrates. The club is reaching full capacity. Now there are pockets of 20-somethings dressed in techno-black uniforms appearing. A group of dark-haired girls in black cocktail dresses and heels arrive, hair groomed to perfection. Then another group of girls appear, who wouldn’t look out of place in East London, all hats, corduroy jackets and Doc Martens.

De Sluwe Vos is showcasing his technical ability, effortlessly jumping between three CDJs, looping and cutting tracks, moving seamlessly from the 90s rhythm of Dub Duo’s ‘Empty Town’ to pounding techno. He teasingly withholds the bass on Nyra’s ‘Tears I Can’t Hold’ as the soulful vocal and guitar riff fill the room. The crowd are focused on the music now; in particular, the one guy who’s been enthusiastically fist-pumping for the past two hours. 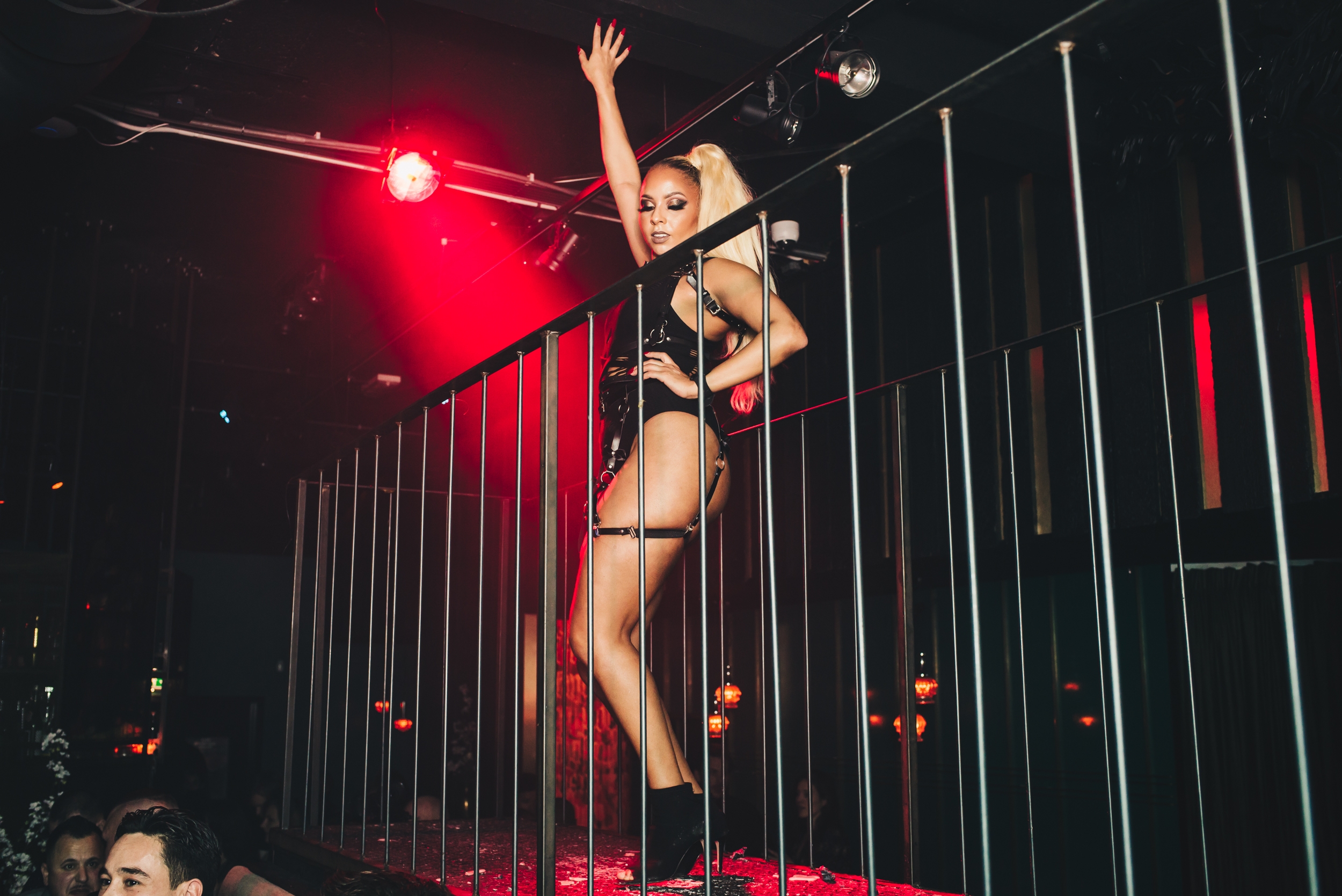 But again, more paradox. A trip to the toilet in an English club usually leads to lengthy chats with strangers and Facebook friend requests the next morning from people you have no recollection of meeting. In Rotterdam it’s slightly different. One local girl, Esther, 26, is a little more receptive. Her light brown hair neatly pulled off her face, smiles shyly, agreeing with our observation: “Yeah, that’s typical of Dutch people,” she says softly. “They’re more introverted.” But they don’t stay in: “There’s always a party. You can go out every night. Even on a Monday.”

It’s a culture that the city wants to encourage – a true, open-all-hours city, with nightlife existing alongside homes and business. Rather than the kind of haphazard throwing up of apartments that could lead to the closure of music venues, the authorities are giving it careful consideration. Nikki, one of the owners of the club, explains that the authorities want to combine nightlife with apartments: “They’re very helpful. They’re thinking about how they can build a city for the future, because Rotterdam is so unfinished. They’re building [apartments] that are isolated from the noise outside because they want to make a city that is attractive [to people] and has this 24-hour culture.”

The underground scene here is certainly thriving: Rotterdam is home to Operator Radio, Pinkman Records and Clone Records, clubs such as Now And Wow and Toffler and upcoming festivals like Boothstock in May and Expedition in June. And as we leave at 5am, the party shows no sign of stopping. The flashing red lights and the silhouettes of writhing bodies can be seen from the street below, the soft thud of bass just audible over the wind off the harbour. Like one of the supertankers moored there, Rotterdam might take a while to get going, but once it does, there’s no stopping it.