Felix Clary Weatherall is having a bad day. The Londoner is set to appear at the Belgian music and tech festival known as and&, but right now, after missing his Eurostar connection, he’s alone, has no bank card and has spent the whole day in near-meltdown.

A series of frantic texts and rescheduled trains later he arrives in Leuven in a well-worn baseball cap advertising Australia’s favourite beer, flannel shirt and jeans. Turning the corner he’s greeted by a communal ‘Weyyyy!’ from bandmates Jed and John, who are sitting outside the hotel and sipping from comically large goblets of beer. “I’m so, so sorry,” Weatherall repeats over and over, but with a cheeky grin that suggests the day’s woes are easily forgotten.

It’s fair to say the 24-year-old is still navigating his remarkable rise – and not always getting it right. Nearly four million hits on your breakout track will do that to you. In 2016, ‘Talk To Me You’ll Understand’ turned him from a student of popular music at Goldsmiths, where he, Jed (guitar) and John (sax and microKORG) met five years ago, into a producer on the cusp of a seismic shift. Australian tours, Panorama Bar sunrise sets and Maida Vale sessions all chart his trajectory, but with a Brainfeeder album on the way, he’s going beyond dance music’s hype machine.

“Everything’s blown up so fast that I’m constantly learning how to manage it all,” he admits, the tension finally dropping from his shoulders as we relax at a picnic table. He counts his blessings, though, for ‘Talk To Me You’ll Understand’ almost never happened.

The track had lain dormant for years as label after label turned it down. “I was dancing around my room to it for ages, knowing I had something special,” he says, proudly. Eventually, impatience got the better of him. Calling bullshit on record label tastes, he uploaded the track to SoundCloud where it was almost immediately ripped to YouTube. Eventually it found its way to Lobster Theremin, which snapped it up. “At no point was I disheartened – I knew everybody was wrong,” he recalls. “Now, it’s a large part of everything that’s happened.” 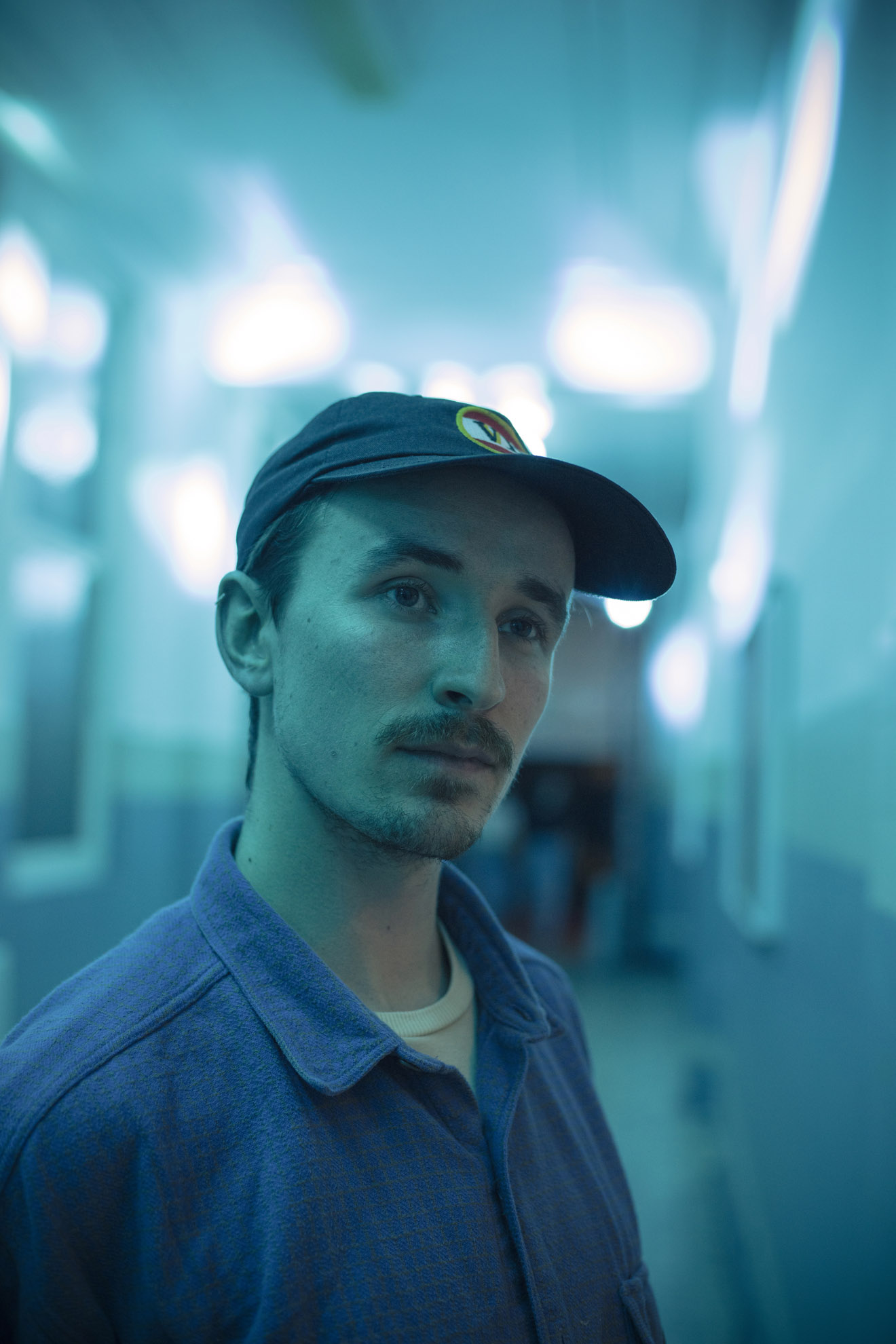 Weatherall grew up in Brightlingsea, near Colchester. “There’s one road in, one road out – it’s literally a dead-end town,” he shrugs, tapping the ash from his roll-up and describing it as full of chippies and fishing boats rather than record shops and clubs.

He found solace in indie bands and early-00s glitch and IDM, obsessing over Arctic Monkeys while hunting for Telefon Tel Aviv torrents on his dad’s computer. He learned guitar, formed a band called Broken Heads, and dreamed big. “We always wanted to be hugely popular and successful,” he says with an ironic smile. They settled for being crowned victors of their school’s Battle of the Bands, but his affection for weirdo electronica never left him.

As he traversed his teens his dad, a casual DJ back in the day, would recount tales of trips to Goa, producing early-90s rave tapes and DJ sets at Camden’s Roundhouse back when it was a crumbling squat. “My sister would be in a little stroller behind the speakers at parties,” he says fondly. “That’s kinda cute.”

Weatherall has already followed in his father’s footsteps and played that same venue twice (so far), supporting Bicep and Little Dragon. “My dad is definitely a huge part of why I do what I do, so that was special. But it would all be weird as hell if it wasn’t with these boys,” he says, gesturing toward his bandmates. “It’s not about my music at all – we’re all an equal part of it. We are all Ross From Friends, in a way.”

“Who’s Joey?” quips the Mixmag photographer. “I set myself up for that,” Weatherall laughs. “I can’t get annoyed by that question!”

But some have, namely two Friends enthusiasts who journeyed to the depths of East London expecting an audience with David Schwimmer. Instead, they were greeted by the caustic thud of Weatherall and co.

“That was truly absurd. They were in evening dresses, ready for a night at the theatre,” he says, shaking his head in disbelief.

“Apparently David Schwimmer is aware of us,” John adds, sheepishly. 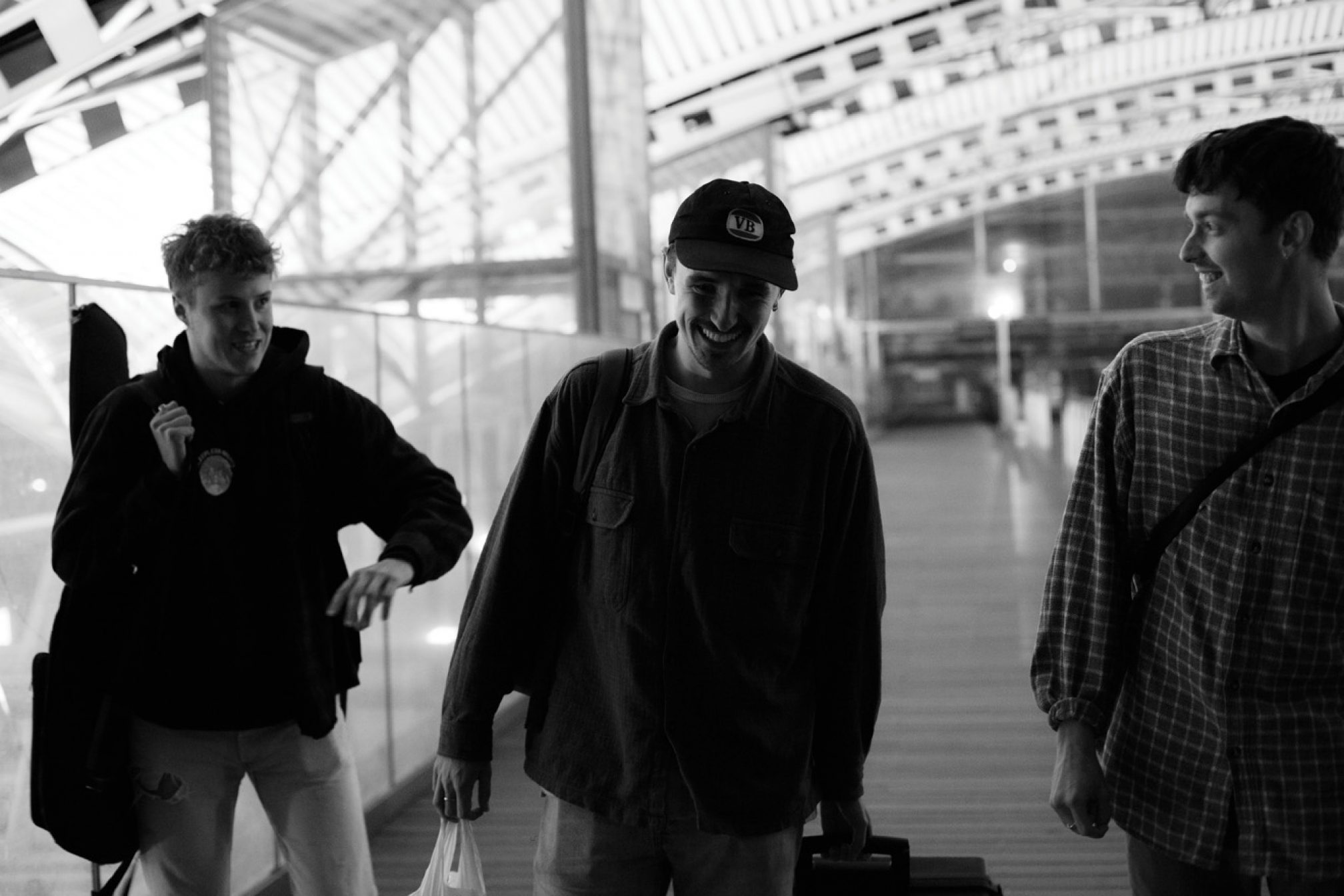 If it wasn’t obvious by now, Weatherall is seldom serious, and with his slightly geeky demeanour and memory bank full of Peep Show quotes he’s never exactly been the textbook definition of ‘cool’. Is Ross From Friends an alter ego? “I definitely thought that when I first started,” he admits. “But now, my personality is out there and so much of this is about me as a person that I’m happy for people to know what I’m all about.”

It’s fitting, then, that he’s found a home at Brainfeeder, where fellow artists like Thundercat and founder Flying Lotus very much embrace their oddities. He still remembers with total clarity how FlyLo discovered him.

The trio were five hours into a six-hour drive to a Cornish festival on a stifling afternoon in June 2016 when Weatherall’s phone pinged. He opened Twitter to find a message from the LA beatmaker, asking simply, ‘Do you want to release an album on my record label, Brainfeeder?’

The car erupted in a string of inaudible yells and four-letter words as Weatherall waved his phone in the air. “He’s one of the best producers ever in my eyes,” he says today, excitement about releasing on the label still clear. But with the excitement has come pressure, even if Weatherall is blasé about overcoming it.

“I definitely felt the need to please a certain group of people,” he admits. He began making “FlyLo-type beats” that never saw the light of day, while tweaking old tracks that led to nothing but frustration. Before long, a year’s worth of new material had led to his “everything’s fucked” moment.

It was FlyLo’s advice – ‘Make the album you want to make’ – that was the cut-through intervention Weatherall needed. So, with six months to go, he scrapped almost everything and pressed reset. “To have someone who’s from a completely different [musical] spectrum chatting to me like that,” he says; “it made me feel comfortable broadening my horizons and doing something I really wanted to do.” He channelled those teachings into the velvet-smooth basslines and phased harmonies of ‘Aphelion’, his first Brainfeeder EP. Now, it’s album time.

“Now, so much of this is about me as a person that I’m happy for people to know what i’m about”

‘Family Portrait’ pulls from the the disparate dance music influences that have come to define him: the vibrancy of hip hop, Japanese boogie, and house music. It nods to a growing maturity both as a producer and an individual.

“I think I’m growing up, y’know,” he reflects. Littered with vocal excerpts from friends, and typically goofball skits, it’s a richly sentimental LP – and one that paints a picture of a rapid change in his life. “I’m 24 now, and after university you expect everything to be planned out,” he says. “But my music tastes are changing, my attitudes are changing, everything is changing.”

Growing up is one thing, but growing out of the ‘lo-fi’ label Weatherall has become synonymous with is another. Lo-fi began brewing on YouTube channels in 2016, and its deep, granular bass and crunching drums soon became inescapable. Publications dissected it, producers emulated it and labels were hungry for it.

The trio recoil at its mere mention. “Everybody I know absolutely rejects that term because of the connotations of it,” Weatherall remarks. For him the tagline seems unjust, as his lo-fi origins pay homage to the rough-around-the-edges studio techniques that are celebrated within his core influences: hip hop and experimental electronica. “My approach to sampling has been inspired by chopping tapes, banging it in and being as DIY as possible,” he says. 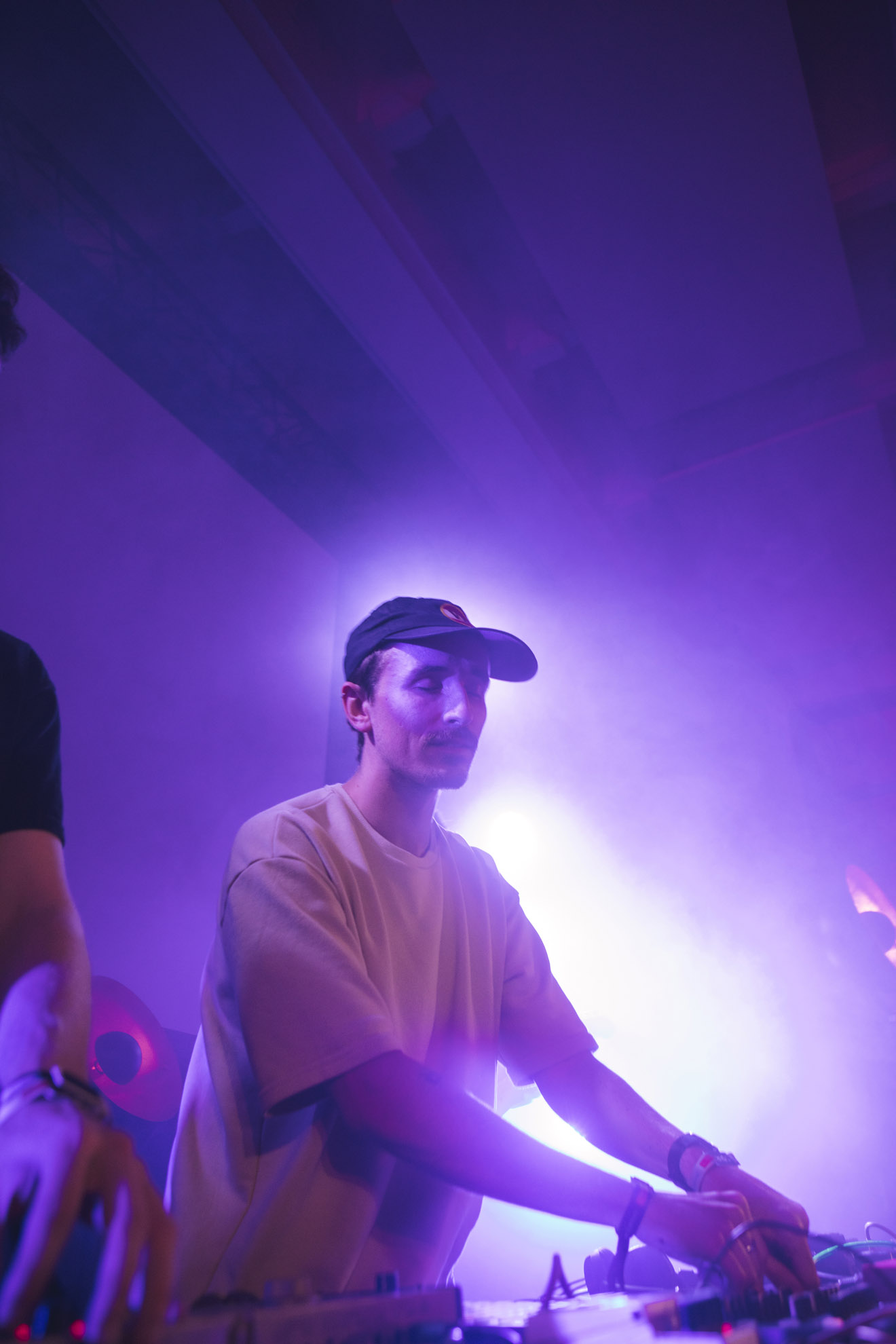 But whatever side of the fence you’re on, the crowds at Belgium’s and& don’t care for buzzwords. “The reason we bought tickets was to see you,” one fan tells him in the courtyard smoking area, pointing at a startled Weatherall. “It’s Ross!” another proclaims, accosting him at a urinal. Weatherall sends a smile his way, chats to us about old tracks as he, erm, ‘finishes’, and then politely declines a well-intentioned handshake.

Two minutes until stage time and Weatherall is still sharing pleasantries. The opening chords of 2018’s ‘Champagne’ resonate through the building and, realising the music’s started without him, Weatherall runs through the crowd, squeezes between shoulders and settles under the spotlights with laptop, Ableton Push and keyboard.

For club-weary lads they own the stage. Jed pirouettes, guitar pointing skywards, as ‘Romeo, Romeo’ ignites a dancefloor carnival. The trio are drenched in a luminous glow as the metallic rhythms of album track ‘R.A.T.S’ contort over Aphex-crunches; it’s unlike anything we’ve heard from them before. The dreamscapes of ‘Bootman’ pull at the heartstrings as the band bow out, but it’s ‘Talk To Me You’ll Understand’ mid-set that evokes the night’s most rapturious response. It’s the track that takes Weatherall back to the beginning; his name-maker. 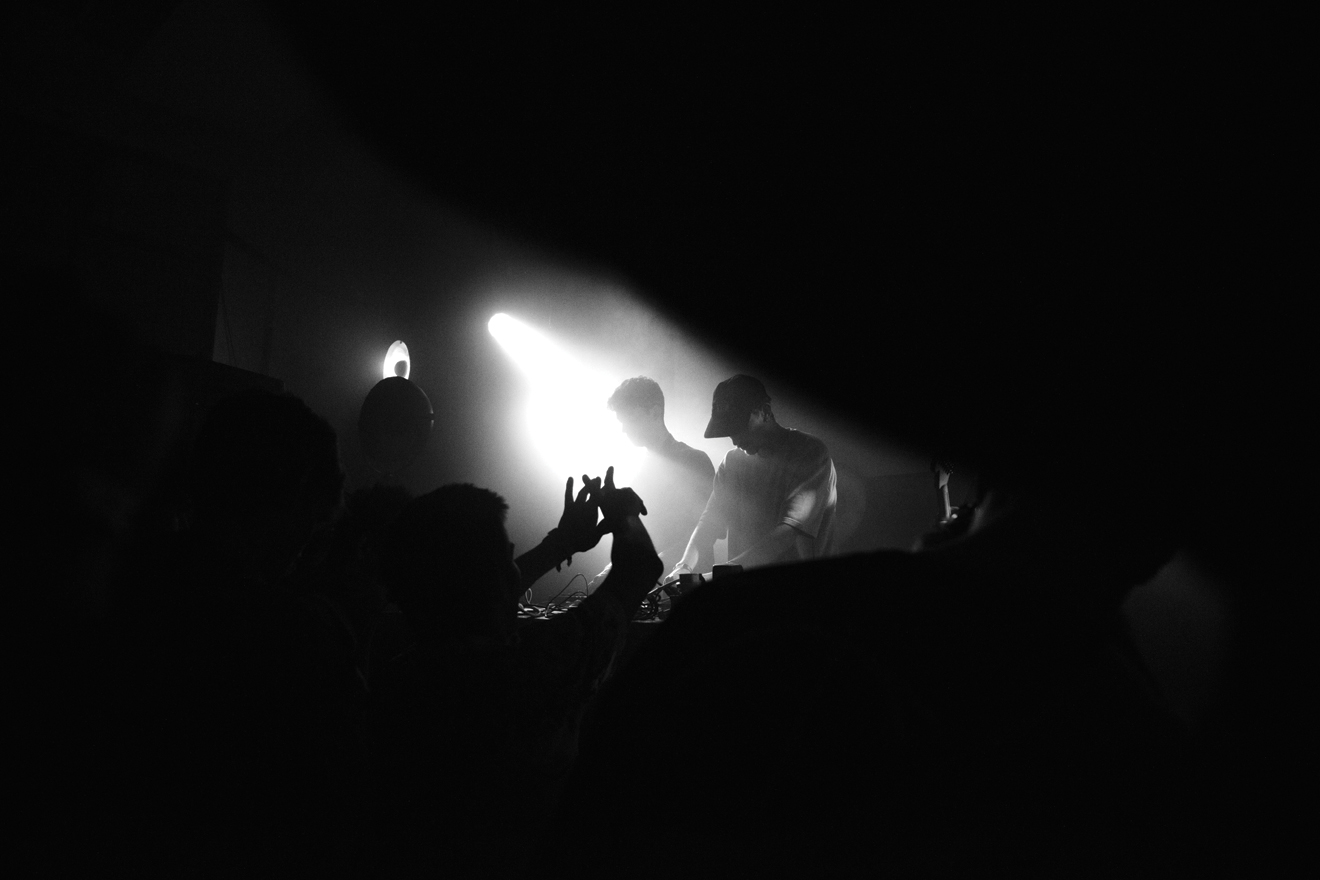 Fandom is still strange to Weatherall, and the idea that his records “made at home and played at home,” make people dance like maniacs is even stranger. “I’ve been there: hanging around, trying to get a photo – it’s absolutely spellbinding that somebody would want that from me,” he says, now sunk into a backstage sofa. “Performing live, with guitars and saxophones, I now realise there is space for this kind of thing in club music.”

The next morning they wake up groggy. Not from any after-hours debauchery, but rather, late-night Nintendo Switch sessions. Over breakfast, Bicep’s Matt McBriar appears from nowhere to share the anguish of technical difficulties at their recent Roundhouse show. An artist verging on his break-out, Weatherall seems reassured that even big timers have bad days.