The champion company behind the massive, expansive three-day spectacle and brand of Electric Daisy Carnival has blasted beyond niche recognition within the electronic music space and rocketed into widespread and commercial recognition as what many consider the flagship "rave" festival in the United States.

Just one glance at photos from the other-worldly stages and endless laser beams from the company's world-renowned flagship fest , and it's clear - Insomniac has been aiming (and achieving) major recognition as a festival in a league of its own in terms of production and experience over the past few years - quite the opposite of "blending in".

Since its heralded days in Los Angeles' famed Coliseum, Insomniac has fostered the constant growth of EDC. Even when struck down by unavoidable tragedies, CEO and leading force behind Insomniac Pasquale Rotella managed to turn a ill-fated happening into an unprecedented, prosperous move for the brand and its then-uncertain longevity.

2011 marked EDC's first expansion into Las Vegas - away from its once-comfortable home of Southern California and into unmarked territory - quite literally, the "Wild West". Most know the history from here: Las Vegas, in its sinful, embracing ways, soaked in all that EDC had to offer. A report from just earlier this year gave Electric Daisy Carnival Las Vegas' the credit of bringing in an impressive $1.3 billion impact on the local economy, a concrete stamp that Insomniac has not only found its footing within the modern dance music realm, but also planted itself firmly as behemoth festival promoter and brand with a long-lasting future ahead. 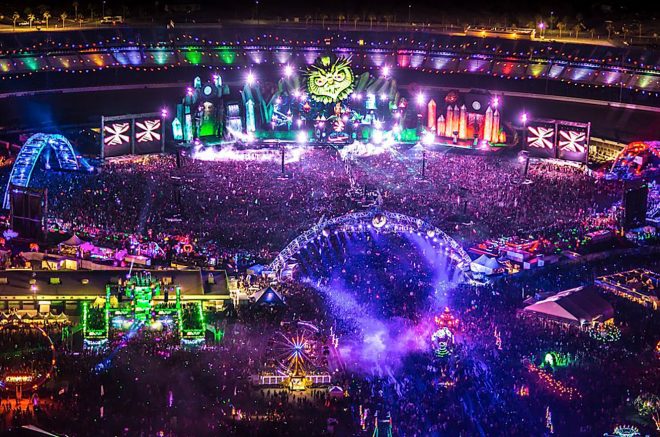 But for fans that liaise on the opposing spectrum of dance music, what Insomniac has to offer can sometimes be a hard pill to swallow. Glittered clowns on stilts and tickets that graze from $400 to $500 were never parts of the rave for those more comfortable on a different spectrum of the sphere. Forget the multi-million dollar stage production projects, forget dressing down to your (accessorized) skivvies - the rave remains in a dark, dank room with a lone, persistent strobe light and a DJ that shies away from the spotlight rather than basks deep within it. There are no phones, no Snapchats, no inhibitions.

Just the dance floor and its people.

Despite the more obvious flashy components of Insomniac and the empire that has since blossomed underneath the umbrella, at the core of the entire operation is someone who knows - and I mean, really knows - the roots of the rave.

Long before he was crowned the "EDM king", Pasquale Rotella was once just another face in the crowd and world devoid of the massive spread of EDCs, Tomorrowlands and even before the first efforts of Ultra Music Festival in '99. But in 1992 following the controversial unfolding of the Rodney King riots, Los Angeles became an extremely hostile environment for many - especially those seeking a lawless, all-night party.

"When the scene died in the early ‘90s, I had a huge void in my life," Rotella reflects. "I had no choice but to take the reins and create those underground parties on my own."

Two decades later, Insomniac might be known more for its larger-than-life stages and top-shelf production and music curation, but in the beginning, there was just a warehouse and an undying love for the party.

Pasquale's first Insomniac event was a rave situated in a not-so-glamorous neighborhood of Los Angeles - but none of that mattered. What mattered was the result: the beginning of what would come to be a lasting dedication to creating parties that people - hundreds, then thousands of people - wanted to attend.