After opening its doors in 1976, the Rilindja Printing House in downtown Pristina quickly became a source of pride for the whole of Kosovo. Housing Yugoslavia’s first Albanian language newspaper, it was the second biggest printing house in the whole of the Balkans, employing upwards of 2,600 Kosovars and reaching a maximum circulation of 234,000. “It used to enlighten our society through books and inform them through newspapers,” explains local DJ and promoter Uran Badivuku. Closing abruptly in 2002, Badivuku and childhood friend Arbnor Dragaj have since found an altogether different purpose for Rilindja’s sprawling warehouse space.

For the past five years, the pair have been responsible for bringing some of the world’s best techno DJs to Pristina under the Hapësira banner: an electronic music collective and NGO dedicated to enhancing the cultural situation in Europe’s youngest capital city. In Rilindja, having stood vacant for so many years, the crew found the perfect venue hiding in plain sight. Uniting and re-engaging what Dragaj describes as the “sleeping audience”, Hapësira was borne out of necessity. Pristina’s electronic music scene, considered one of the most vibrant in the region in the years after Kosovo’s 2008 independence, had stagnated following the closure of the talismanic Spray Club. Dragaj, a former promoter at Spray, and Badivuku, a revered local DJ who plays under the name Uran B, decided to shake things up. “We wanted to bring a new energy to the scene,” Dragaj recalls. “A raw, warehouse [party] that people in Pristina hadn’t experienced before.” Rilindja (which happens to translate to ‘rebirth’), was quickly transformed into the kind of post-industrial rave hangar that techno promoters dream of.

“The most impressive thing was that, for a relatively poor country still very much in its infancy, Hapësira presented something that felt like it came from the future,” recalls Daniel Avery six months on from his debut in the Kosovan capital. “The sound and visuals rivalled those of anywhere else, and from the second I walked in I could tell that the team had built something genuinely meaningful for the people of Pristina.”

Putting Kosovo back on the clubbing map is one thing, but for Hapësira there are social and political responsibilities that are of equal importance. Seeking to unlock the ‘closed mind-set’ that he says still plagues most Kosovars, Dragaj outlines the three pillars that underpin the collective: “They are motivation, inspiration and leadership, because the youth here don’t know where to find these things – they’re not given space to show what they can do.” 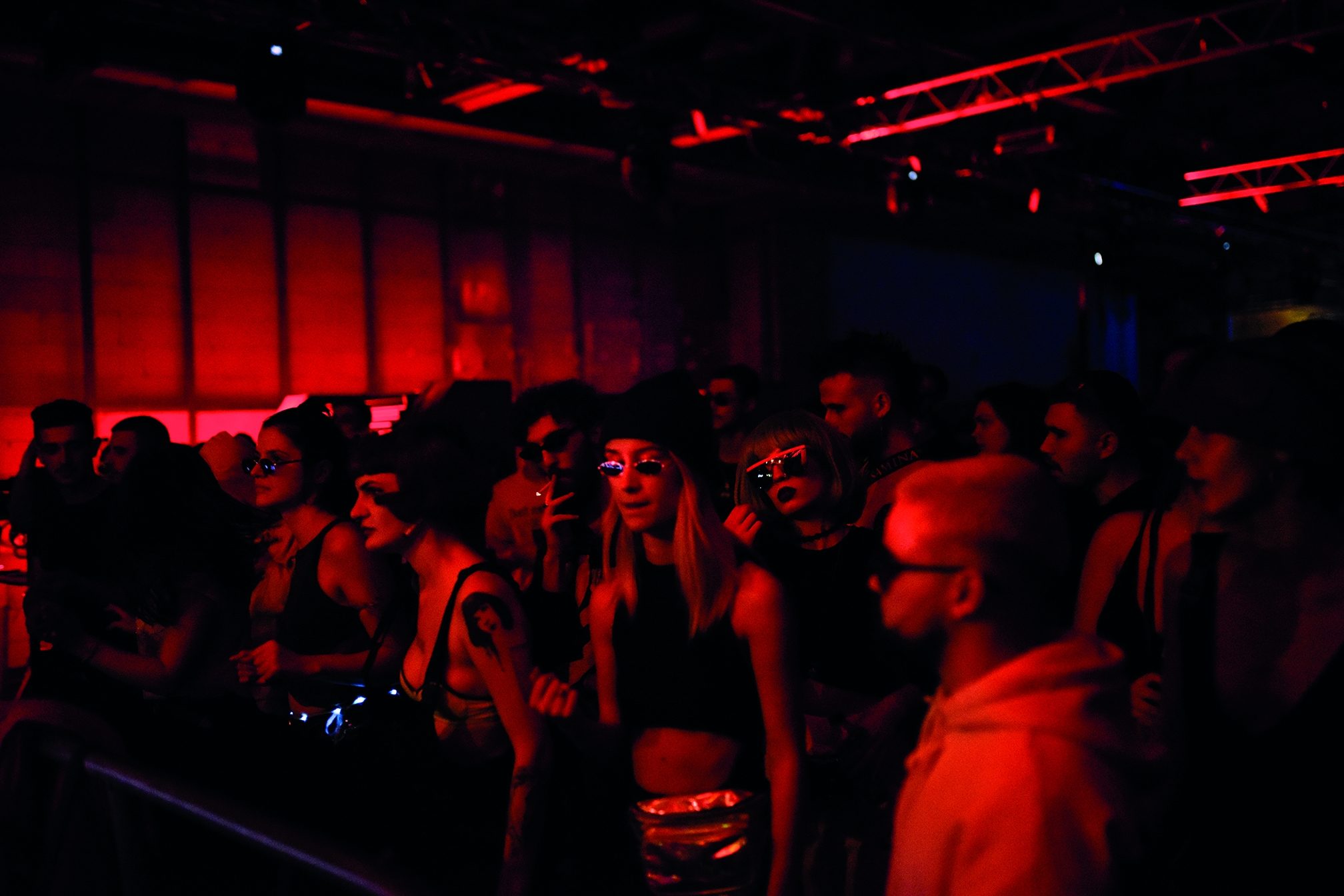 One of the ways in which these values are instilled is through the social responsibility fund, where attendees are encouraged to bring 1kg of food in exchange for a reduced ticket price. With the help of local government officials, Hapësira members then spend the days following each event sorting and distributing food parcels to some of Pristina’s most deprived areas. “When we first told people about this initiative they laughed at us,” says Badivuku. “They said the kind of people that come to techno events don’t care about these things, they just want to party.” The 600kg of food collected at the last party suggests otherwise.

It only takes a quick glance at Kosovo’s youth unemployment levels – recent figures suggest that roughly half of all young people are out of work – to realise why Hapësira are concerned about more than simply dancefloor escapism. Behind the charming boulevards and disarmingly warm atmosphere of the capital city, there’s a young population that can feel lost and disillusioned. For Christian Heldt, the German Ambassador to Kosovo and a longstanding supporter of Hapësira’s vision, the situation is nevertheless positive. “This generation in their late twenties to early thirties are so super-engaged in making things happen,” he says. “Many of them have very good education and could take job offers all over the world, yet they come back here because they want this country to arrive in the twenty-first century.”

Read this next: How Cxema parties are changing the face of the Ukranian techno scene

Ambassador Heldt’s role in the story of Hapësira couldn’t be more pivotal. In no uncertain terms, Dragaj and Badivuku say they would have been removed from Rilindja years ago if it wasn’t for his intervention. “I supported the guys so they could survive bureaucracy,” Heldt says modestly, keen to shift the focus back on to Hapësira. It’s a fight that’s not over yet – the crew still need to apply for a licence for each individual party – but there’s a quiet confidence that they’re here to stay.

Tonight’s party, commemorating the fall of the Berlin Wall and stacked full of German DJs, almost seems like a ‘thank you’ to the ambassador for all his work behind the scenes. Entering the venue through a narrow, dimly-lit corridor, a handful of historical photos of those embracing immediately after the fall of the wall are installed overhead and hint at the kind of vibe Hapësira are keen to cultivate. Moving into the main room, it immediately becomes apparent as to what all the fuss is about. With various printing machinery dotted about the vast hall, relics from a past life, Rilindja is a warehouse laden with character – refreshingly authentic when compared to the contrived ‘warehouse experience’ that many British clubs strive for. 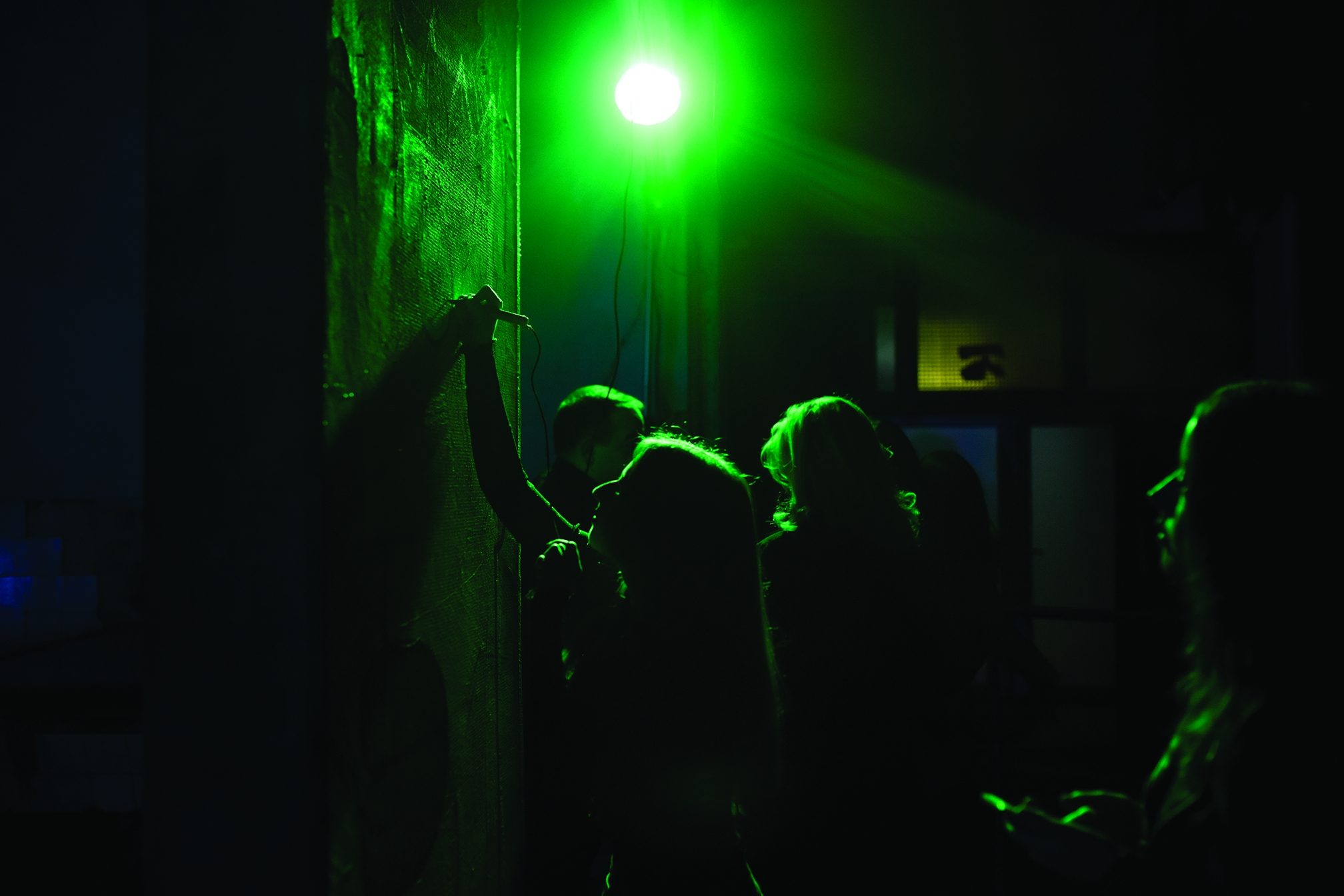 Belgrade-based DJ Zhe Pechorin, who travelled down from the Serbian capital earlier in the day, is easing the crowds in with ambient sounds. Given that tensions between the Albanian and Serb ethnic groups in Kosovo remain fraught, her inclusion on the line-up is another subtle act of unity from Hapësira. “Borders exist only politically,” Badivuku summarises succinctly. Shifting towards crunchier, grooving techno that gradually builds to a stomp, Pechorin hands over to Berlin-via-Leipzig selector Lux. It’s at this point that the dancefloor suddenly begins to bulge. Bus-loads of ravers from neighbouring Albania and North Macedonia pour in as the warehouse immediately doubles in attendance. As Lux lays down a set of polished techno, the atmosphere is electric. Miezan, a 20-something Berliner now living in Pristina and working for the ambassador, finds that the warm dancefloor atmosphere makes a refreshing change from the posturing of her home town. “People are so desperate to consume and fit into this stereotype of Berlin,” she tells us while dancing. “But here people are so much more appreciative. I’ve met so many people here from different countries – that’s what subculture is about.”

Read this next: Lebanon's rave revolution

Hardware aficionado Tobias Freund then glides through an intricate live performance before passing over to Ostgut Ton titan Answer Code Request for a typically pounding session. As the clock edges towards the 7:AM curfew, the energy in the room shows no signs of relenting, with all corners of the Pristina music scene united as one. Toton, a scene legend and the city’s most recognisable DJ, is the sound guy for the evening; ERA, a Hapësira resident based over the border in Tirana, explains that she would have loved to play tonight but her tastes are “more industrial”; while Lum, who co-runs the grime-flavoured Angry Youth party responsible for bringing the likes of Flowdan and DJ Karnage to Kosovo, is also front left showing his support for the cause.

As the lights come up and revellers embrace, Badivuku looks wistful as he savours the last few moments of another massively successful event. “As Kosovars, we’ve been through some really harsh times,” he says. “Now we’re trying to rebuild and find our identity. We believe that Hapësira can be a symbol of this new Kosovan identity.”