It’s a sensitive time to point this out, but the famous nightlife riches of Catalonia (Sónar, Elrow, Razzmatazz etc) mean its historical, political and cultural rival, the Spanish capital of Madrid, is often overlooked as a clubbing destination. But it boasts one of the most significant party venues on the planet: the colossal Fabrik nightclub.

And that goes double when Mindshake boss Paco Osuna takes over for his annual slot here: El Rey is in his castle. Tonight, ravers have travelled from all over Spain, Portugal, Italy and France to be in attendance. And yet so far we haven’t clocked a single British person in the crowd. But the feeling is that things are about to change, because after years of decline the dance scene here in Madrid is genuinely astir.

Right now, brand new venues are opening up all over the city. Old, forgotten clubs are reopening, while fresh underground collectives continue thrive among the sprawling industrialised suburbs that bound the limits of the EU’s third-largest metropolis.

The main artery of the scene is hard-wired into Fabrik, a 12,000-capacity superclub on the edge of the city. Surrounded by a breakneck puzzle of dusty superhighways, a whorehouse on one side, a pig farm on the other, it’s a intense setting that confounds the senses. 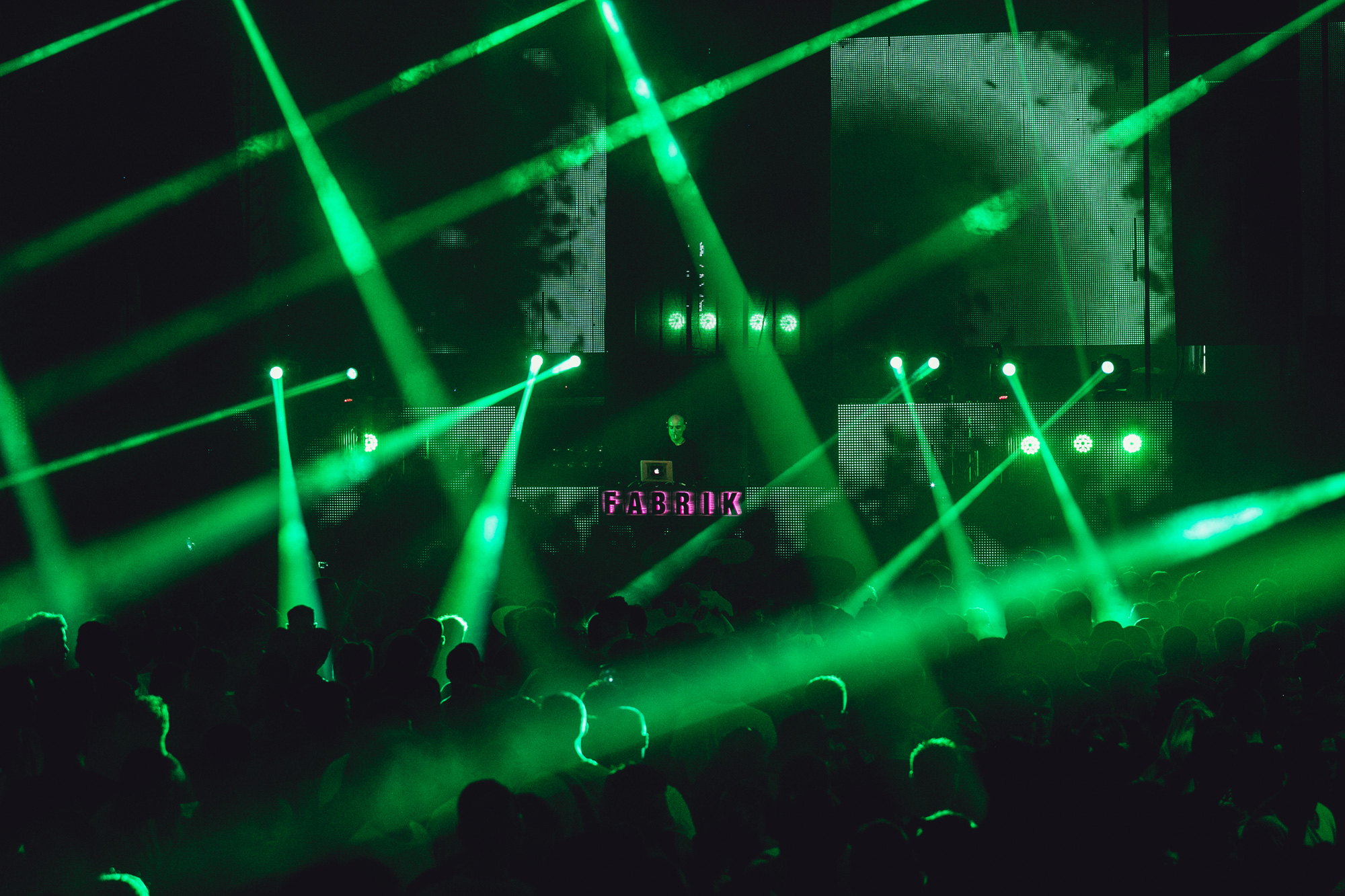 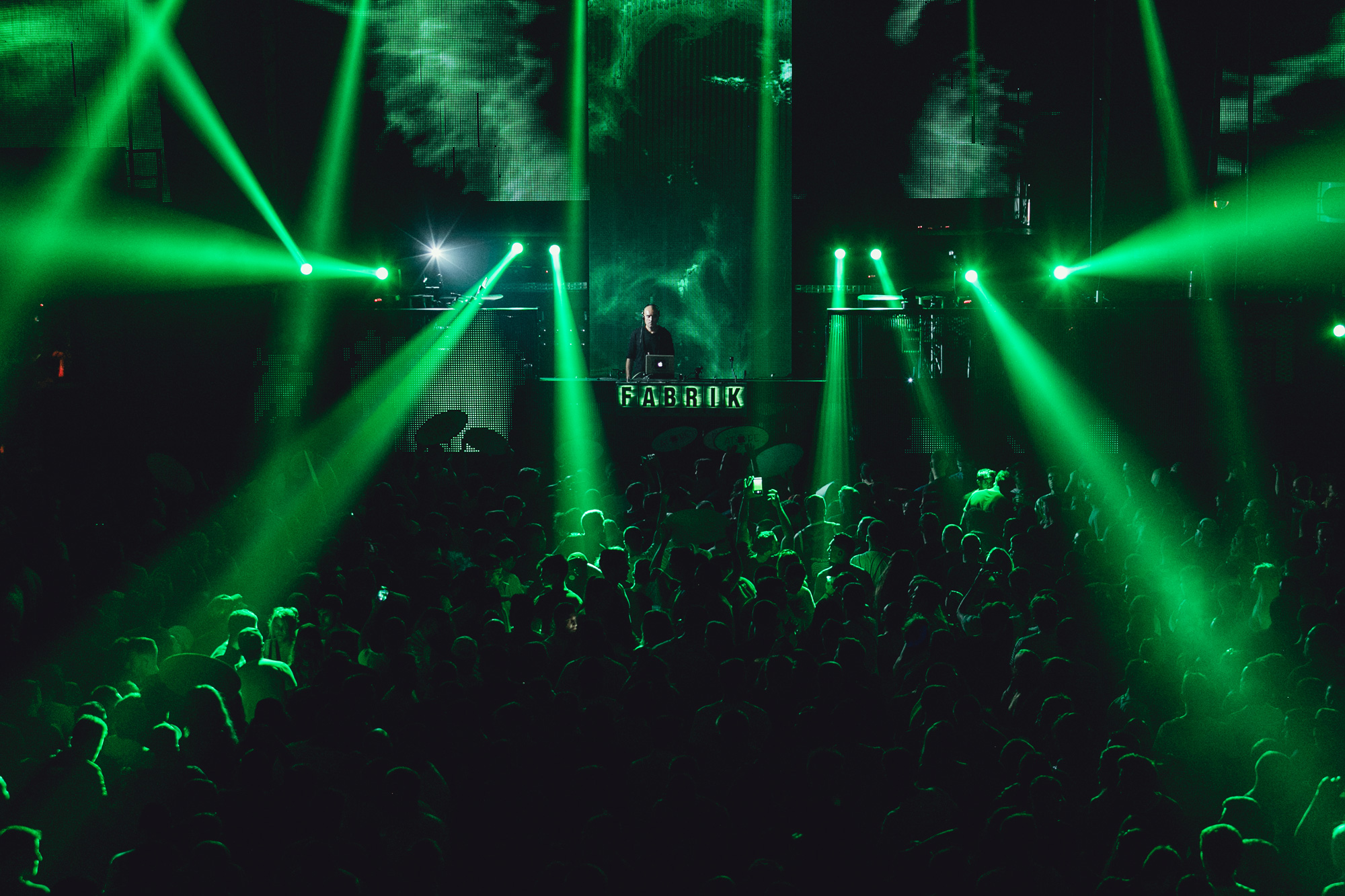 We’re inside the giant arena just before midnight. Spanish rave crews – 20-year-old girls and guys dressed in denim cut-offs and black tees – wait patiently outside Paco Osuna’s dressing room door, hoping to catch a glimpse of their idol. Most are carrying flags, banners and signs loud with slogans, one of which reads ‘No Paco. No Party!’. It’s clear who’s the main draw here.

“Paco is our Carl Cox,” says Alba Garcia, 19, from Madrid when we ask what all the fuss is about. “Getting a photo with him is fulfilling my dreams. He’s like a Hollywood star to Spanish techno fans. When I saw him at Dreambeats this summer I literally cried.”

Pushing through the fanfare, we find Paco backstage. He looks cool, calm and considered, dressed head-to-toe in the usual black techno apparel. He’s on the brink of stepping out into Fabrik’s enormous Main Room, a situation he likens to a Champions League Final. 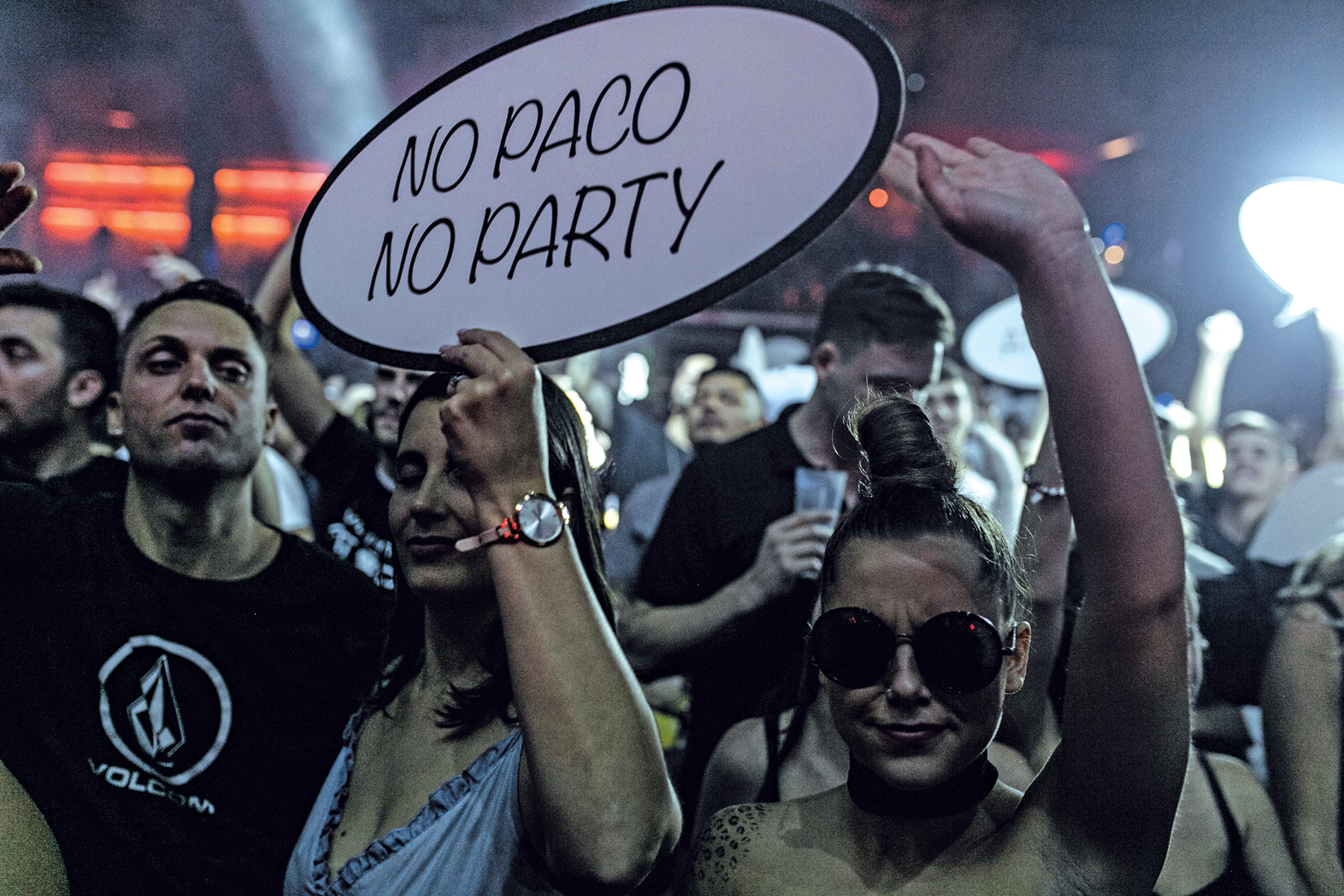 “There are so many festivals in the world with big reputations that I am excited to play,” says Paco, “but nothing compares to playing here at Fabrik. The responsibility is very big; the feeling is just incredible. Tonight the result is entirely on me. I have been obsessing over my set for the past three weeks: preparing the music, thinking about what time the club will be full or when I should start playing harder. This, my annual party at Fabrik, is extremely important for me and I try to prepare as much as I can, to be as professional as I can.”

According to Paco, Fabrik is quite simply the best large club he has played anywhere in the world. “You have five or six thousand people dancing in front of you,” he says, “but even when Fabrik is packed you get the feeling of a small club.”

Exiting the dressing room behind Paco and his security entourage is a wild experience. He’s literally mobbed for autographs and photographs. Some of the kids just want to touch him. He signs as much as he can, then finally his team whisk him away. Five minutes later and he’s in the booth knocking out a barrage of chugging tech-house before a 2,000-strong crowd of early bird ravers.

The gargantuan Main Room is darkly lit, its form essentially square. Bars vending hard booze surround the dancefloor, simultaneously providing a foundation for a U-shaped VIP balcony. Silver air filtration tubes snake the 60-foot high ceiling above us. The new Tecnare sound rig is punchy and expertly tuned. Visually, the panorama looks and sounds like a fusion of Privilege and the old Space Discoteca, with plenty of warehouse-style vibes thrown in for good measure. Moving safely around the venue is made easy by a wide pedestrian-style tunnel that frames the entire complex. 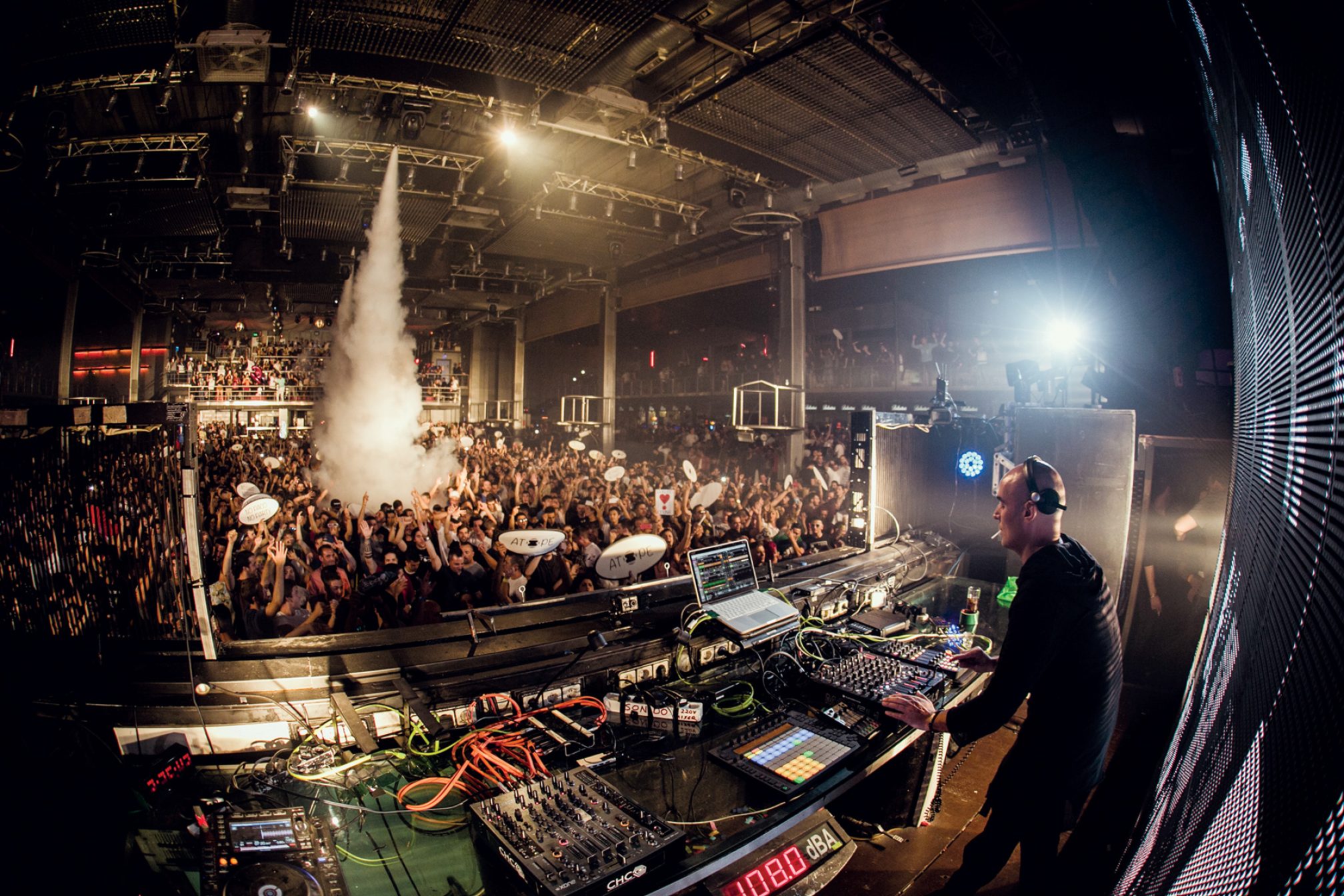 There’s also a 1,500-capacity steel-panelled side room called the Satellite. Involve Records ambassador Regal is on duty, dropping acidic thrills on behalf of Code, a cult party insignia that has been working with Fabrik for over 15 years. The sound here is much tougher, the BPMs rising towards 130. Spain may be blessed with a sunny, open-air culture, but evidently the locals like their techno music hard and fast: the more banging the better. Current Ibiza trends do not in any way reflect what’s happening on the ground in Madrid. Drop a vocal house tune tonight and you’ll be quickly discoed off stage.

Back in the Main Room, Paco is two hours into his six-hour set. The crowd has swelled to more than 4,000, everyone stomping away to his deep, dark, techy groves. The mood is primal, the atmosphere fun, ridiculously friendly and just a little messy. It feels like Ibiza used to be five, maybe 10 years ago: the dancefloor rammed with young music fanatics, the general ambience devoid of pretence.

In the booth, he makes it all look very easy. After more than 20 years his experience is as perceptible as his confidence, as tangible as his talent. This is a guy who got his big break at Amnesia back in 1999. Working as a club resident in Ibiza, he spent nights warming up for a diversity of artists, shifting genres to harmonise with Tiësto, to synchronise with Sven Väth. These days, he plays his own sound, yet his booth intelligence was clearly honed by those early experiences. 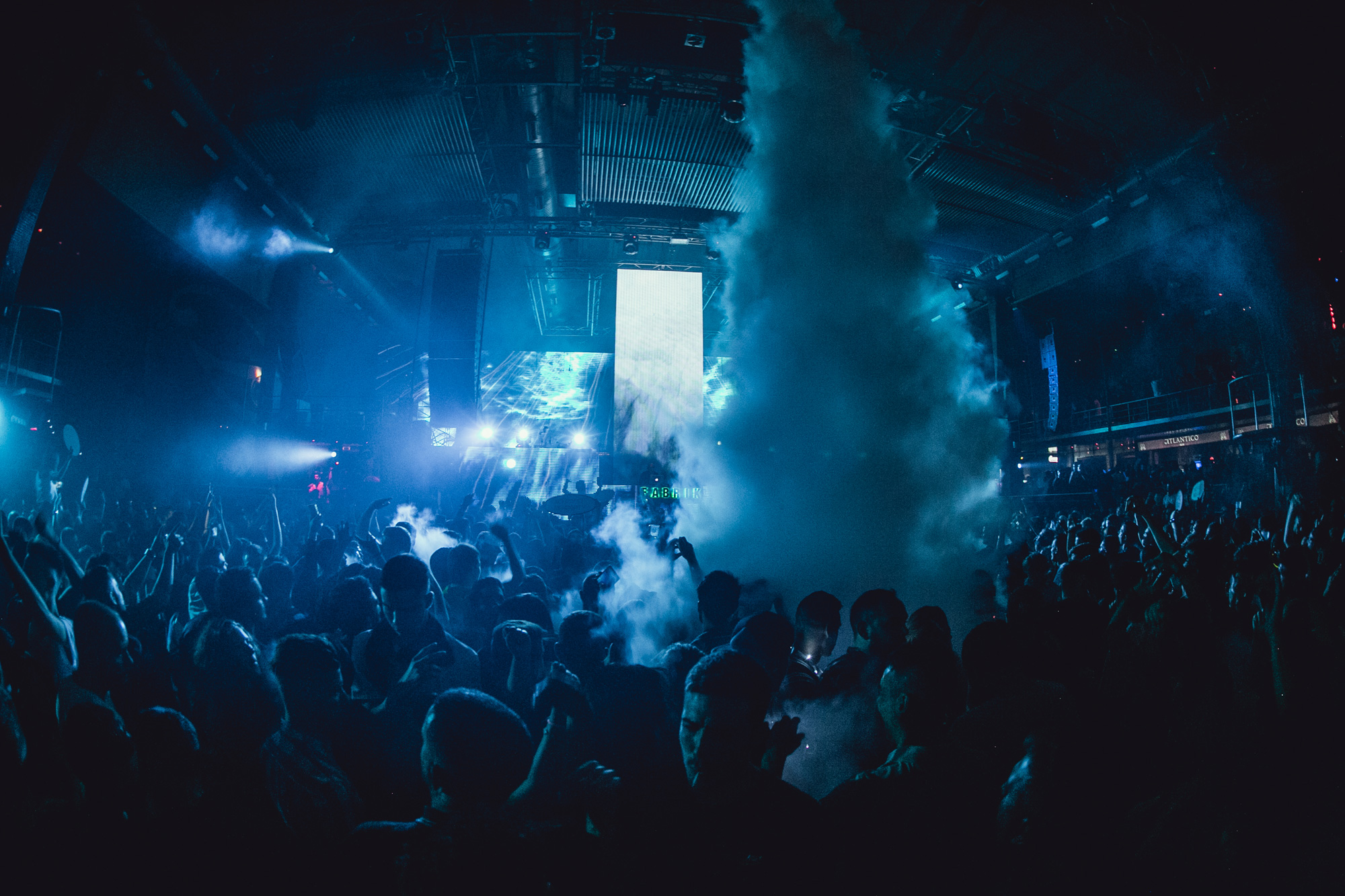 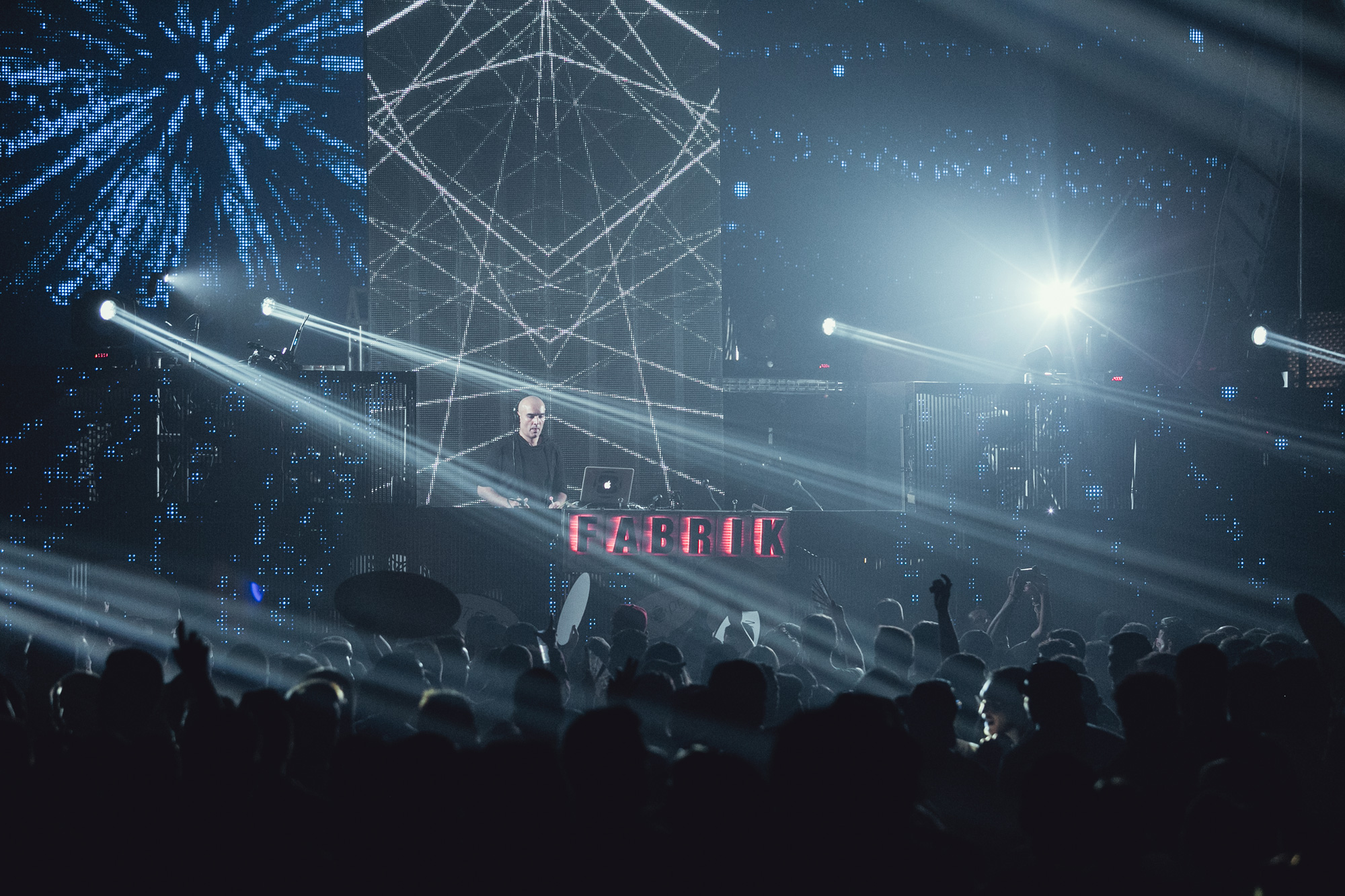 Above all else, Paco’s trump card is his understanding of groove. Smoothly shifting his output from dark tech-house to deep techno, he hits the throttle then pulls back again, always leaving the crowd wanting more, an insatiable underground groove underpinning his every move.

When it comes to dropping extended sets there are few better DJs in the world. When you’re playing all night long, you can’t just play one kind of sound, fusing together three two-hour sets; you have to structure and control the journey, otherwise you’ll lose the crowd. Most don’t have the scope for it. Plus the fact that there’s no roster to hide behind when you’re playing all night long. If you don’t sell any tickets, it’s obvious to everyone that you have no pull, no fanbase.

It’s 5am and Paco shifts gears from upfront bangers and deeper cuts – think Camelphat’s ‘Hulk’ re-fix and Just Be’s ‘Gum Jah’ Remix - to a more rolling techno sound by way of Yenk’s twitchy, old skool-tinted anthem ‘Fashion’. This is what clublife is all about. Everybody smiling. Everybody stomping together to ‘Another Life’ by Hatzler. Twisted sci-fi lead lines reverberating across the void.

On reflection, it’s easy to see why Paco Osuna is so insanely popular – not just here on the mainland, but also in Ibiza where he is a key resident for Marco Carola’s Music On brand. Paco’s sound is dark enough and accessible enough to keep all stripes of techno fan on the dancefloor – all night long. He’s respected by the purists and idolised by newcomers to the scene. And tonight, even at a sprawling superclub like Fabrik, he performs with the same kind of musical freedom he regularly employs at Club4, the 800-capacity venue he co-owns in Barcelona. Fittingly, for a city that claims to work and party harder than any other, the dancefloor was busier at 7am than it was at 4am. Barcelona, now it’s your move.