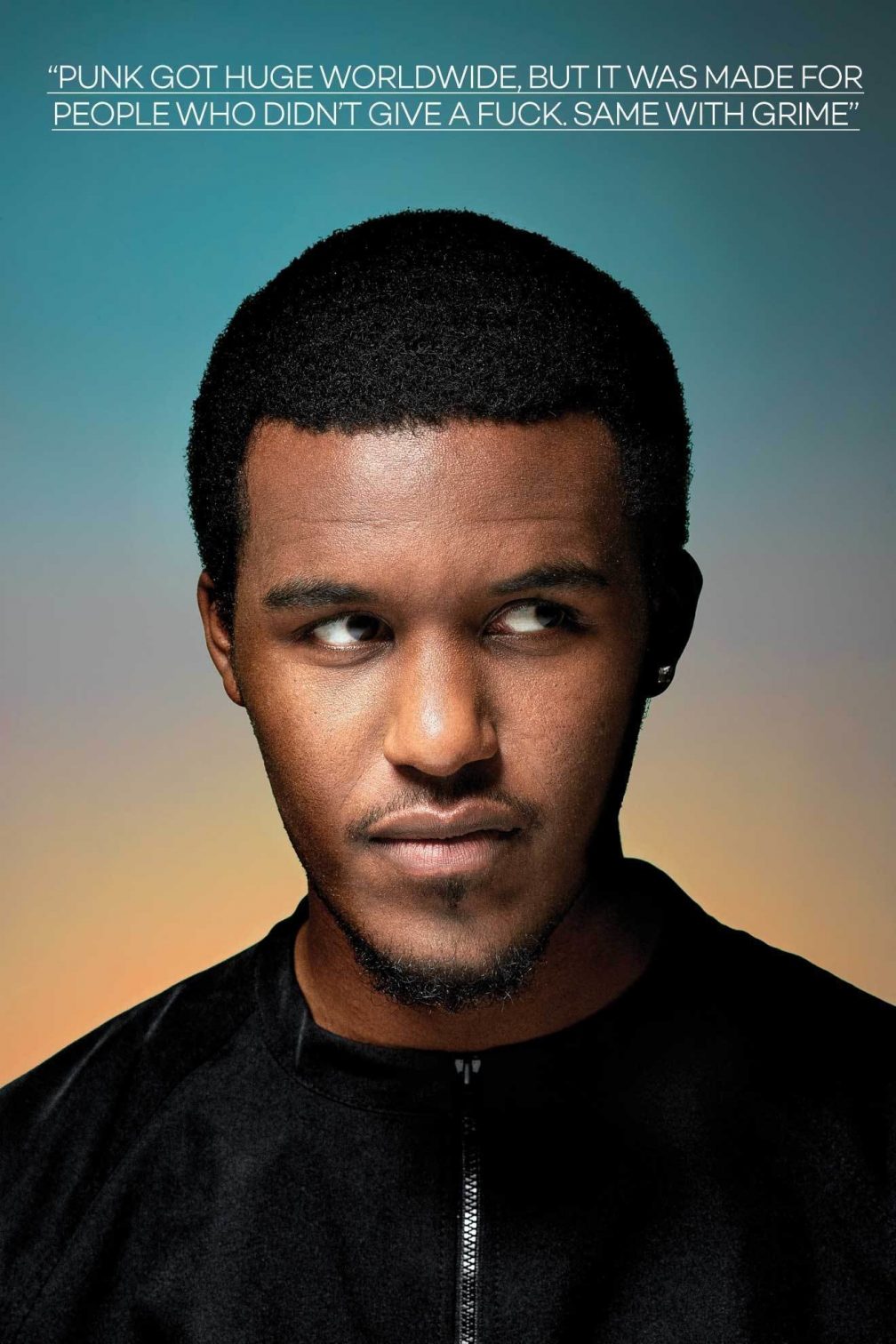 However, it was grime that became his real love early on, his uncle providing him with CDs and Lord Of The Mics and Risky Roadz DVDs, which featured the likes of Wiley, Kano and Ruff Sqwad. Before long he was messing around on production software like Reason, Fruity Loops and Cubase, eventually starting to MC at 13 with the full backing of his mum.

“She used to drive me to pirate radio. My mum’s on it,” he says, a note of pride in his voice as he describes early visits to stations such as Flex FM and Reprezent. “Now, if I say I’m going to Footsie’s house, she might laugh because she remembers when I was watching them on DVD.” You can see the merits of this training in a video of him energetically freestyling over M-Beat and General Levy’s jungle classic ‘Incredible’ on Toddla T’s BBC 1Xtra show in 2014. It’s experiences like that, and joining Mumdance on Rinse, Slimzee on NTS and Logan Sama on New York station Know Wave, that no doubt prepare him for battle live.

“He always impresses me as he doesn’t get fazed. It doesn’t matter the size of the crowd, or how weird the instrumental is, he always keeps on top of things,” Mumdance tells us. Characteristically, Novelist agrees, saying years of radio have made him the “best MC my age in the rave”.

It’s hard to argue as we witness his warm-up slot for Skepta and JME at Brixton Academy the day after our interview. Bandana tied round his head in true Tupac style, he bounds around with the exuberance of a kid high on E-numbers. “When I say ‘Nov’, you say ‘wait’,” he urges the crowd, an instruction the streetwear-clad ravers are only too happy to obey. His performance is so self-assured it’s easy to forget he’s the same age as most of the punters in the 5,000-capacity venue.

Part of the first generation to grow up listening to the London-bred sound, Novelist has been branded a “product of grime, musically” by Logan Sama, a DJ engulfed in the genre from the start. “We’re [the young MCs] trying to be better than the older MCs,” Nov tells us at the Ace, sucking up the last of his drink through a straw. There’s no bitter rivalry, though. He and grime kingpin Skepta, or Skeps as he affectionately calls him, “just bust jokes and chill” rather than talk music. Scroll through Novelist’s Instagram and it’s clear in the Facetime screenshots, all cheesy smiles and laughter, that despite a 14-year age difference, the two are tight. It was last July when both were, coincidentally, in New York at the same time: Skepta for MoMA PS1 and Novelist for the Lit City Rave show with Future Brown’s J-Cush. Nov ended up freestyling over Slimzee’s set at MoMA before Skepta and co arrived, and it was here he realised he had a following in the States who “care about the energy of the music”.

Grime might have failed to conquer America 10 years ago, but a whirlwind 2015 for Skepta turned the key for it to do so this time around. Kanye West called on the Boy Better Know man to gather a bunch of MCs (Novelist among them) to join him on stage at the Brits, and Drake, hilariously, got a BBK tattoo on his shoulder. Could co-signs like this, plus Novelist guesting on the Baauer album, initiate authentic grime music making a mark there now? “Yeah, but we don’t care about that,” Nov snaps, removing his beanie to show he’s swapped the Fresh Prince Of Bel Air high-top for a rounder cut. “It could get big there, but it’s not meant to. You see punk – that got huge worldwide but that was made for the people who didn’t give a fuck. It’s the same with grime.”