Walking past tired-eyed survivors taking a well-earned sit-down in the smoking area and a dozen bodies sprawled out on the cloakroom floor catching a brief breather, Mixmag arrives at E1 at midday on 1 January, fresh faced and ready to go. It’s 15 hours into the mammoth launch party for London’s newest club.

For a first night – in fact for any night, especially in the UK – 27 hours is incredibly ambitious. While over in Berlin, Berghain and Tresor host NYE events running for at least two days, aside from Fabric’s birthdays this is a rarity for the UK. “We wanted to make a statement, to do things a little differently,” says Ben Prince, E1’s production manager. Opening for as long as their licence allows lets E1 make a statement with their line-up, too, and they pack in a raft of underground megastars (Âme, Ben Klock, Maceo Plex, Rødhåd) alongside some of the most exciting talents of the past year (Avalon Emerson, Volvox, Courtesy, Billy Turner). It’s a journey that begins with the thoughtful, melodic sounds of Italian duo Fideles on the evening of December 31 and climaxes with Rødhåd in one room and Maceo Plex in another at midnight after the first day of 2018.

E1’s not strictly a ‘new’ club: the building first opened for events when fashion photographer Yuval Hen took over this 8,000 square foot former car manufacturing plant and turned it into a functioning studio. Club nights, corporate events, product launches and weddings shortly followed in the site under the name Studio Spaces. But E1 is the first time the club has had permanence, and has something that previous parties here would’ve killed for. 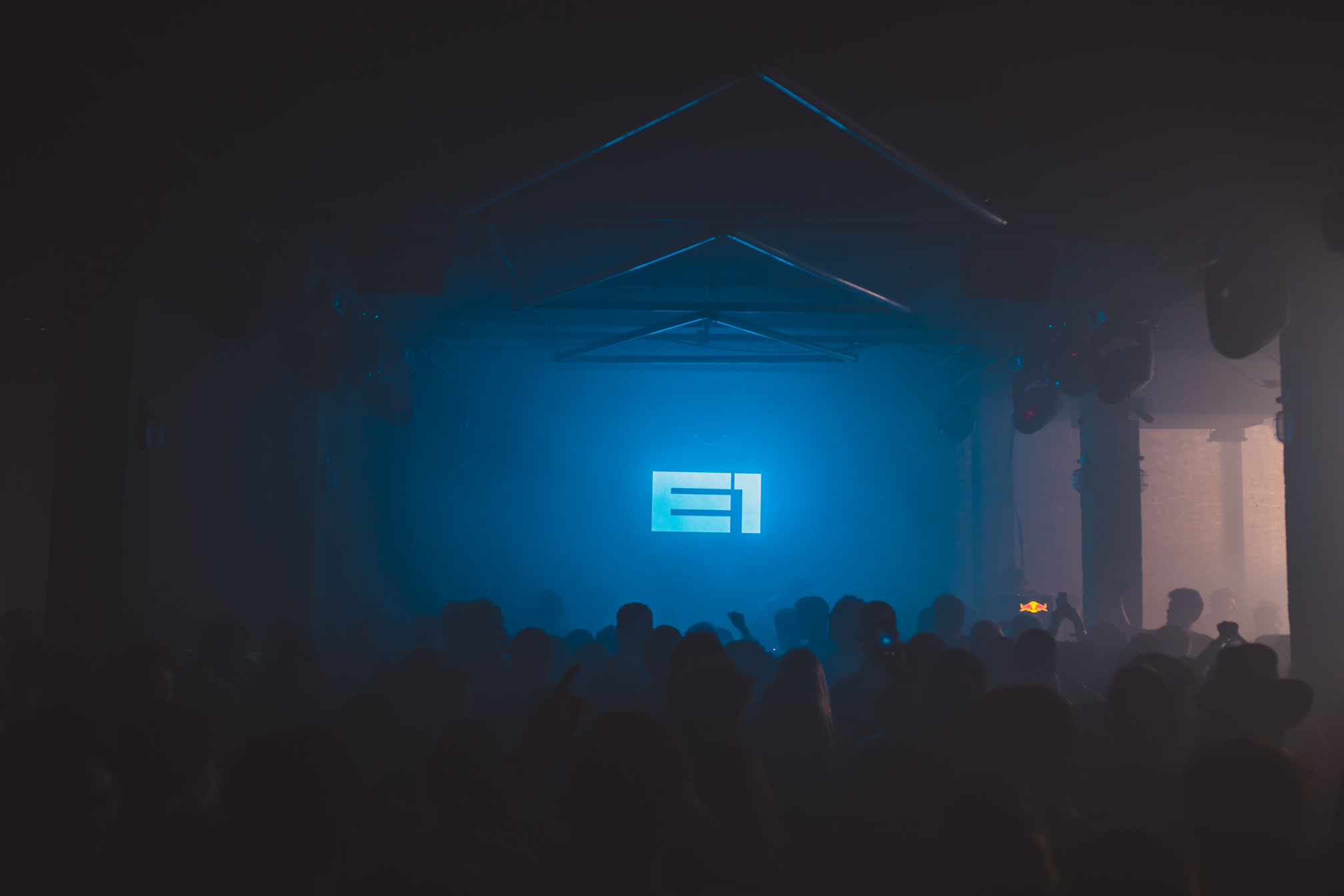 “The paramount aim was to create a space that has truly remarkable sound, something that we’ve felt was lacking in London,” says Ben, and the venue’s two rooms, Black Studio and Warehouse, have been redesigned around an Evo 6 Funktion-One system, the first of its kind in the UK.

Both rooms take no prisoners. We enter Black Studio just as Skream protégé Billy Turner begins to deliver three hours of dark yet rhythmic techno and acid. In the larger, concrete-walled, industrial-style Warehouse room Ben Klock packs the space between tall pillars and under neon lights. With a towering stack of speakers pummelling chests and vibrating the floor with wall-shaking bass, it’s a no-frills, stripped-back aesthetic with the focus on delivering banging techno, impressive production and a pounding yet clear sound. When the C02 cannons blast, it’s a welcome cool-down as Klock delivers only the hardest techno in his record bag. Unbelievably, it’s not quite 5pm.

A mix of hard-partying Londoners and Europeans in their 20s dressed in everything from fluffy unicorn onesies to all-black techno uniforms, many waving fans to keep cool and several wearing sunglasses inside, rub shoulders with the older generation: a middle-aged man dancing alone sports a ‘Jesus Loves The Acid’ T-shirt while a group of leather-clad tattooed men go for it right in front of Black Studio’s tall decks. Despite the huge space only ever seeming half full, the atmosphere is infectious and inescapable, typified by a curly-haired older woman who moves straight into the centre, high-kicking, pirouetting and punching the air before dropping to the ground and rolling around like she’s possessed. Eventually an energetic, black-vested all-night raver arrives and the two compete in a dance-off. 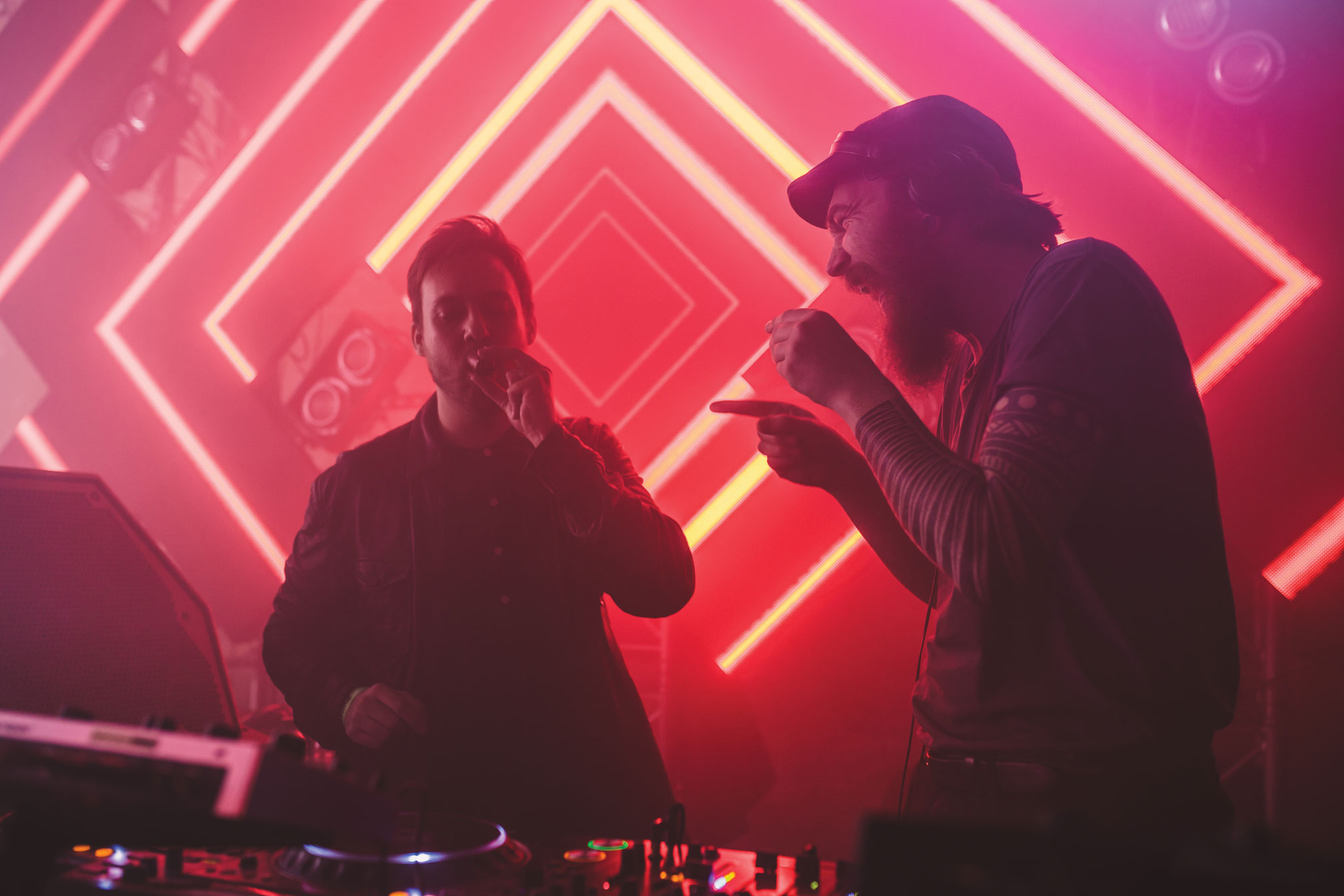 As soon as Courtesy takes charge with her bag of vinyl, it’s clear she means business: she immediately ups the energy. Moving between full-throttle electro, bleepy techno and haunting, synth drum-led oddities, it’s an ethos that’s shared by San Francisco’s Avalon Emerson, who arrives for a two-and-a-half-hour journey of obscure electro, UK breakbeats, ethereal techno and, in the final 30 minutes, feel-good crowd-pleasers. A percussion-led remix of one of last year’s biggest underground hits, Yaeji’s ‘Raingurl’, has the crowd bouncing on the spot, and mixed straight into an edit of Dee Lite’s classic ‘Groove Is In The Heart’ there’s a real party vibe. The final tracks – including The Prodigy’s anthem ‘Smack My Bitch Up’ and KP & Envyi’s 1998 garage-r’n’b classic ‘Swing My Way’ – show the Californian’s playful side as she dances behind the decks.

The atmosphere is in complete contrast to the twisted techno that New York DJ Volvox is unleashing a few seconds’ walk away in the Warehouse. Leading an unrelenting early-evening workout, the Discwoman mainstay bounces behind the decks full of energy as triangular LED lights flash overhead in sync with hypnotic coded visuals.

“Booking Courtesy, Avalon Emerson and Volvox was a no-brainer,” says E1’s marketing manager Tim Hinson. “The line-up was programmed to showcase not only the big hitters in the scene but also the up-coming talents we have had our eyes on for some time… all three artists have been making big waves in their own right, and we wanted to showcase their music on our huge system. They fitted in perfectly, and we’re hoping to bring them back in 2018 at some point.” With DJ Stingray, Lorenzo Senni, Moodyman and Byron The Aquarius all coming to the Wapping venue over the next few months, E1’s music programme already stands out from the Capital’s less daring house and techno events.

Berliners have these kind of marathons down to a fine art, but E1’s Kreuzberg-style option of leaving as the sun rises and then returning after 4pm gives Londoners just enough time to recharge the batteries. “The crowd coped as well is to be expected with a 27-hour event: a little hazy and tired, but in great spirits throughout,” says a tired but happy Ben afterwards. “We are one hundred per cent open to doing another marathon event again. We’ve not seen a dancefloor quite like that in a very long time.” Time to get in training...