The city of Stockholm runs through Kornél Kovács like a place name on a stick of rock. It inspired the title of his new album, it’s where he first became obsessed with dance music aged 12, and it’s where he founded his record label Studio Barnhus with Axel Boman and Petter Nordkvist 10 years ago. But right now, Kovács is showing blatant disregard for its rules. “Just stand really close behind me and it’ll be fine,” he tells us, as he attempts to smuggle Mixmag and photographer through the barriers and onto the Stockholm underground with his one single ticket.

It’s a mild, late-April day in the Swedish capital and we’re making our way from what Kovács describes as ‘classic rich people Stockholm’ to his apartment on the south side of the city. It’s less than 12 hours until his second album, ‘Stockholm Marathon’, is due to drop on streaming platforms and in record shops around the world, and we’re in town for the launch party of the album at Taverna Brillo, an upmarket restaurant and bar-cum-club. Taking a break from the prep for the evening, Kovács is full of the nervous yet excited energy of someone who’s about to throw a landmark birthday party.

Between telling us about the history of the city and the different character of each district as the train travels over the river Norrström, he reveals that he had “a bit of a party at mine last night”, and tells us he needs to go back to do the dishes in case there’s another gathering post-album launch tonight. "Baba [Stiltz] was the last one up at mine last night, so I’m not sure we’ll see him tonight,” he adds. 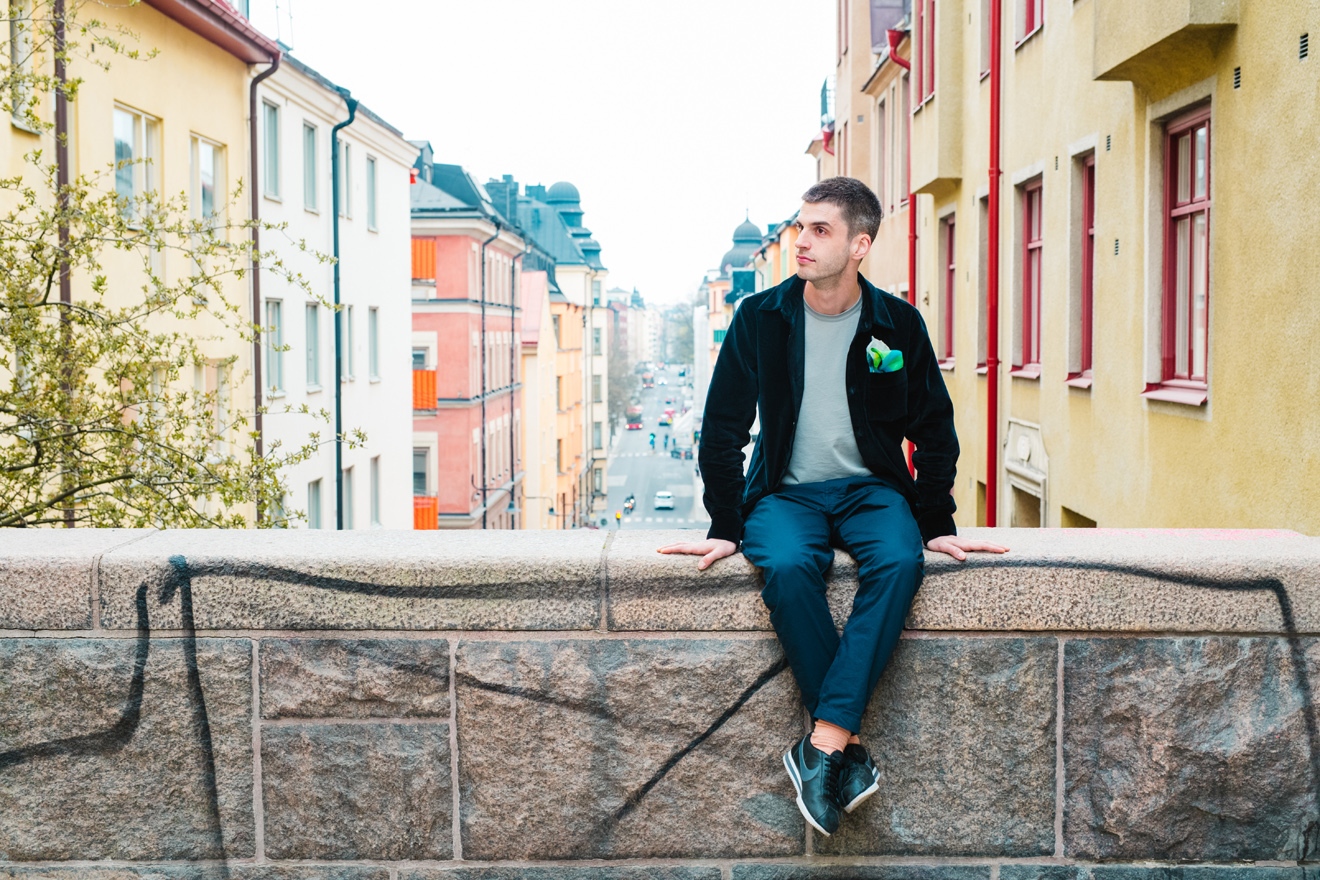 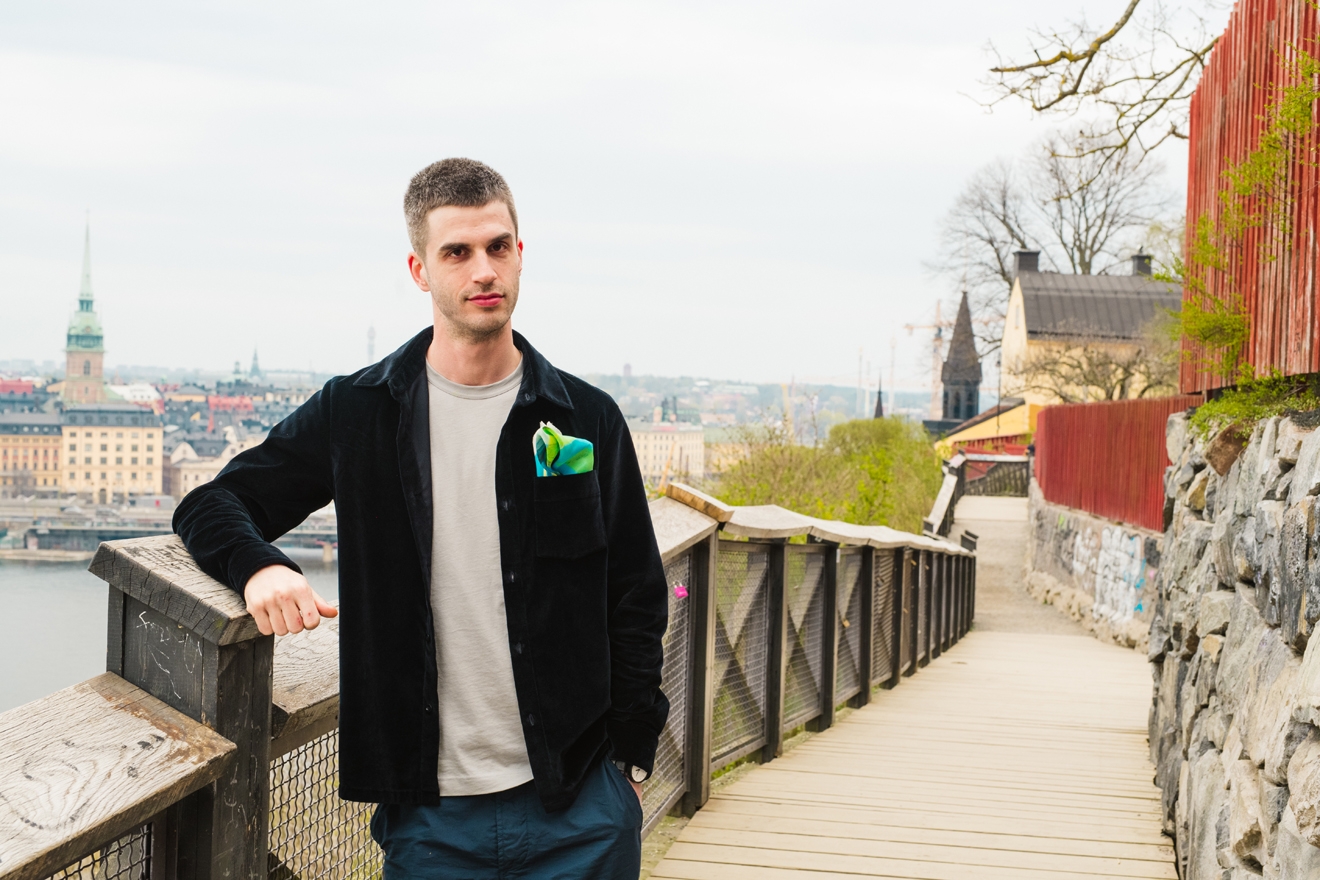 While it’s five years since Kovács broke through at an international level with the hazy house anthem ‘Szikra’ (sample lyric “Let’s get fucked up”) followed by the excellent ‘Radio Koko’ EP on Numbers, Kovács has been an integral part of the scene in Stockholm for well over a decade now. From the age of 12 he was “annoying store clerks” – including Adam Beyer – at the city’s dance music emporium Planet Rhythm, listening to every record and then spending his pocket money on just one, before moving on to Healing Effect Records where the staff let him practice on the turntables and took him on as their young mascot. “By then I’d got a sense of there being a scene in Stockholm,” he tells us; “that there were people who could do this as a job, who had a studio in the basement and were just super into it all.”

By 2003, when he was 18, he was getting regular gigs around the city, and graduated to putting on his own club nights with a ‘nice crew of crazy club kids, who have all gone on to do great things in Stockholm.’

But it would be another 10 years until Kovács broke through in a meaningful sense – despite being at the helm of possibly the coolest Scandinavian electronic music label of the last decade.

“I remember making loads of music and just having a really low opinion of it all,” he admits. “It was really frustrating because I’d be sat next to Axel and Petter [Nordkvist] at our studio on Barnhusgatan and they were churning out amazing music all the time and it just seemed really easy for them, while I was struggling and struggling. I was probably being hard on myself, but they were more experienced and were definitely way ahead of me at that time.”

But all that changed when Kovács released ‘The Bells’ in 2016. A brilliantly inventive and infectious house album that got better and better on each listen, it was placed No. 2 on Mixmag’s Top 50 Albums of 2016 chart.

“That cliché of [drawing on] your whole life so far to make your debut album really rang true for me,” he says. “I really dug back into the archives of music I’d made over the years for ‘The Bells’ and then honed it with the production techniques I have now. Looking back, I’m glad that happened later for me, rather than having some mad success at nineteen.” 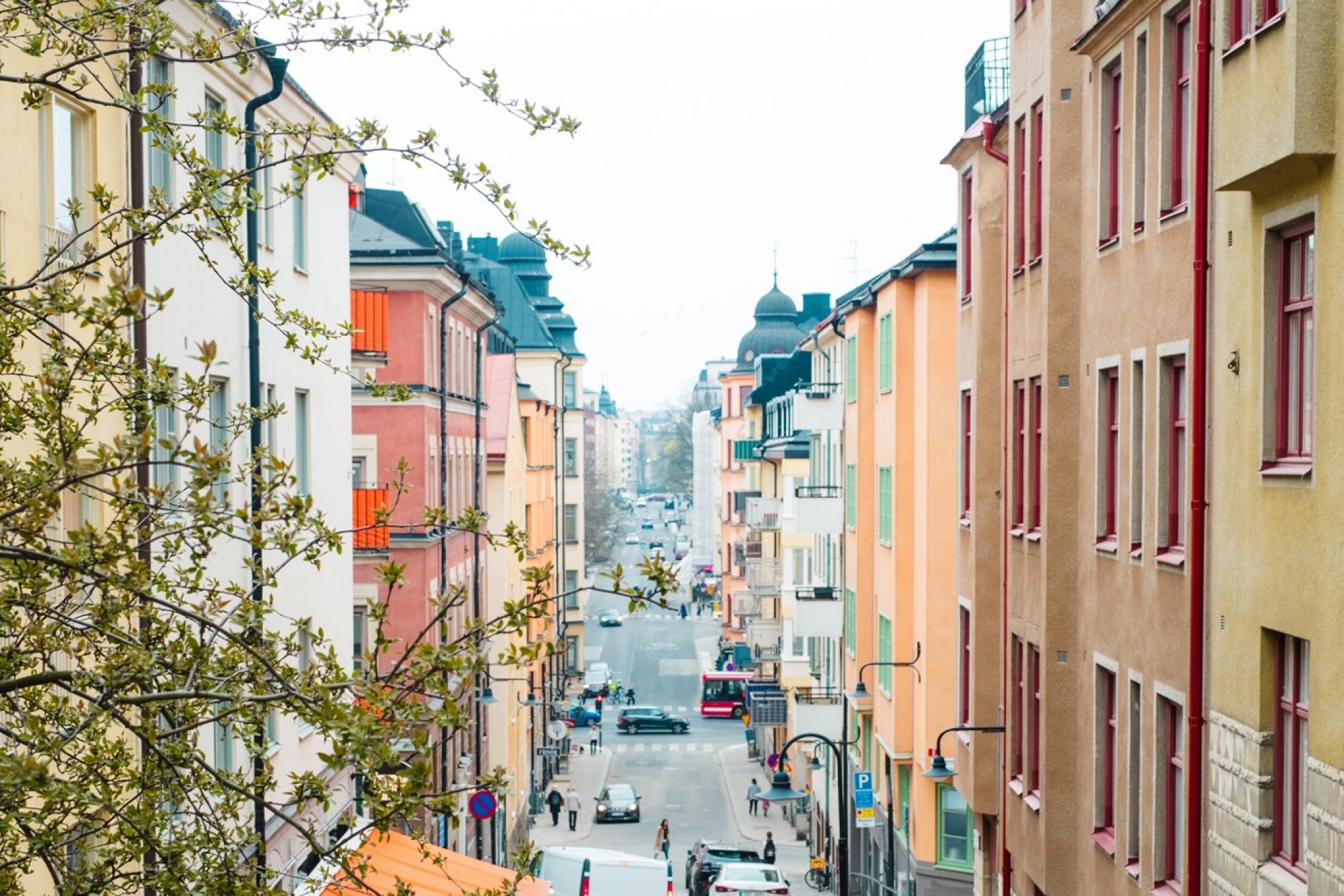 In person Kovács is warm, easygoing and has an air of curiosity about him, echoed in the crammed shelves of his apartment. Biographies of Prince, Salvador Dali and Stalin wrestle for space with books by everyone from Murakami to Truman Capote to David Byrne’s How Music Works, while a poster picked up on a trip to India years ago emblazoned with the words ‘Every man is the architect of his own fortune’ shares wall space with a Smallville poster and a small portrait of Phillip Seymour Hoffman. “You know, this apartment was actually a big part of this album,” he tells us while hurriedly washing the dishes from the previous nights festivities and making coffee.

Following the end of a relationship, Kornél moved back into the studio apartment he had lived in during his early 20s. He says the experience was a little bit like moving back into his teenage bedroom: “it was a bit of a shock and quite weird,” he admits. “But it got me into quite a reflective frame of mind before beginning the album.”

More so than ‘The Bells’, ‘Stockholm Marathon’ is a collaborative affair, with producer Matt Karmil, jazz musician Niclas Skagstedt and Swedish pop duo Rebecca & Fiona all playing key roles in its creation.

To start with, Kornél wrote with Niklas (who he describes as ‘one of his oldest friends’) and by himself in his apartment, before taking the tracks to Matt, who helped hone the productions.

“I’m not a producer who goes to the studio nine to five, although I’m trying to be, so I work in these intense bursts of creativity,” he tells us. “After I’d got the songs written I went to Cologne to work in the studio with Matt for one of these periods, which I probably would have never done if I’d been in a happy, settled relationship at the time.”

Karmil, something of a technical whizz, helped take the productions to the next level with Kornél likening his role to that of a record producer in the more traditional sense of the word.

“I suppose you could call him my studio engineer, but he’s so much more than that,” Kornél explains. “It’s not strictly split as me doing creative things and him doing technical things, as we do a bit of both. But it’s often linked to equipment, as Matt has a lot. I really trust him and get in the right mood for music-making when I’m with him, and I’m lucky to have him. He really pushes my music to the next level.”

Kornél, Matt and Niklas had all contributed to a finished instrumental album, but Kornél felt there was “some weirdness missing”. And this is where Rebecca and Fiona came in.

A Swedish EDM duo who have worked with everyone from Tiësto to Robyn to Avicii, held down a residency in Vegas and look like 90s Versace models, they seem like an odd juxtaposition to the classic music geekery of Kovács and Karmil. But it works. Really well.

“I’d been friends with them for years and we’d talked about working on something before,” he begins. “And then we got together in these really fun and intense sessions – like a drunken romance – and connected over all of us being heartbroken. We wrote a bunch of sappy love songs which I then realised is exactly what the album was missing.”

The resulting record sees Kornél hint further at his potential for making a classic Swedish pop record, and received glowing reviews across the board when it dropped at the end of April. On it, trancey elements mix with 2-step rhythms, off-kilter house and unshakably sugary topline vocals.

“I think my music’s very rhythmic too, but melody does come quite naturally to me,” says Kornél when we ask if
he’s tapping into Sweden’s seemingly intrinsic knack for creating classic pop songs. “It all comes from ABBA. I really admire ABBA, they basically created the Swedish music industry!” 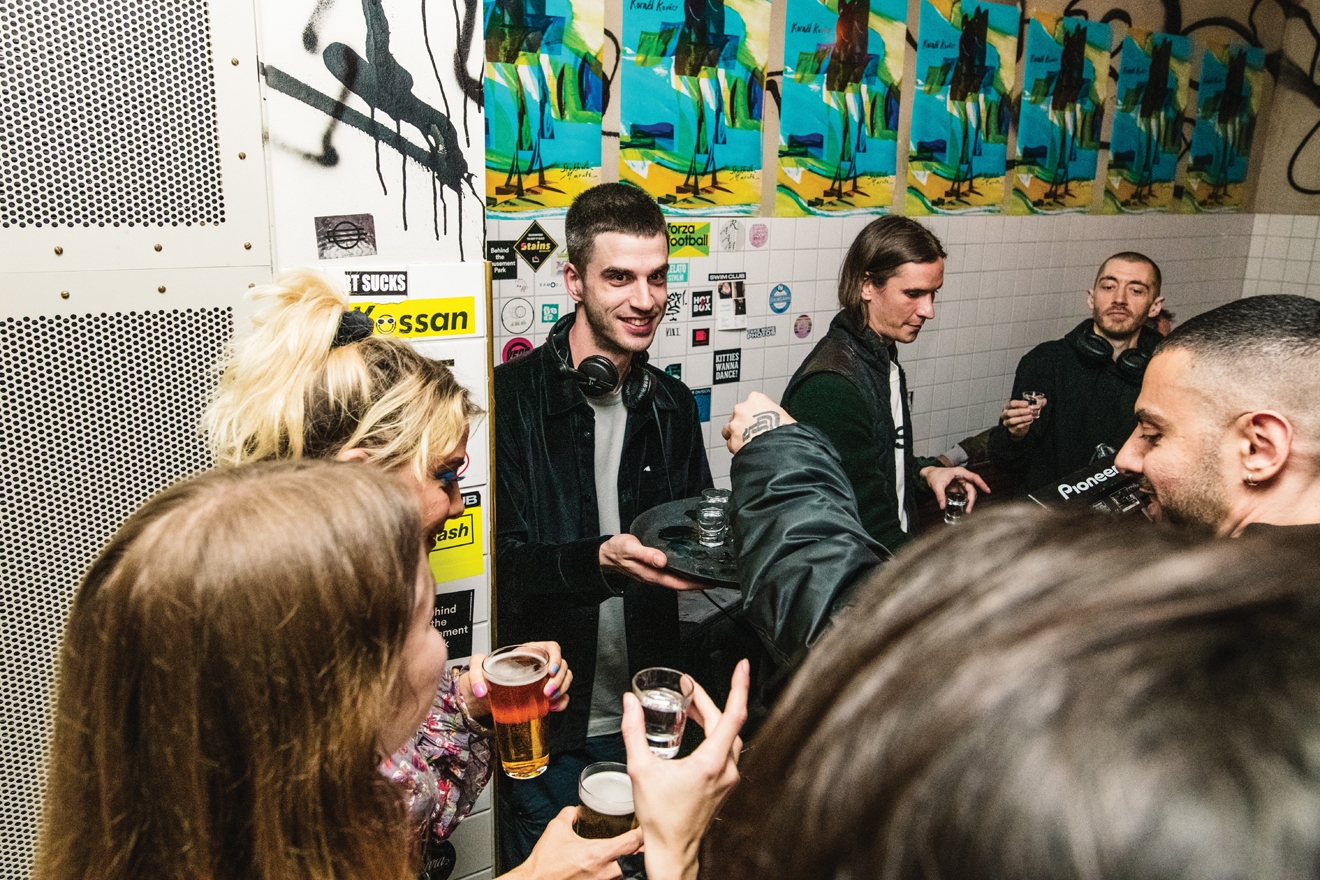 Back at Taverna Brillo a few hours later, Kornél’s hurriedly rushing around before people arrive for the album’s launch party. The key collaborators from the record have all just enjoyed a celebratory meal, and he’s briefly manning the merch stand before heading to the DJ booth to check on the music. It’s something of a family affair, with Barnhus artists like Mount Liberation Unlimited mingling with Kornél’s sister Dora (who appeared on the cover of his first album ‘The Bells’, and who jokingly says that a recent Swedish magazine cover of Kornél, Rebecca and Fiona looked like an Eastern European drug baron and his two girlfriends) amidst a classically cosmopolitan (and good-looking) Swedish crowd. Everything from ABBA to New Order to ‘Neutron Dance’ gets dropped between tracks from the new album, a live jazz set from Niklas’ band and a live excursion from Matt Karmil.

“I’ve got this kind of love/hate relationship with Stockholm, as most people do with their home town,” Kornél tells us. “ I’ve always kind of wanted to leave it but never have, and I guess I’m different from most Swedes as my parents are Hungarian. But I fell back in love with the city making this album, and I’ve realised that this is my spot and I’m doing well out of life here.”

Telling us he plans to take some time out over the summer to “ride my bicycle around town and go swimming everywhere”, he also reveals that Album Three is in the embryonic stage as he works on music specifically to fit artwork he was unable to use for this album. When it’ll see the light of day we don’t know. After all, life’s a marathon, not a sprint.