There’s a reason Brazilian electronic music has been dominating sets and captivating globetrotting DJs, dancefloor diehards and researchers alike in the past decade – the omnivore tendencies of the country’s producers make for some of the hardest, bass-driven, body-slamming music to come out of South America. This drive to seamlessly blend popular styles from all over the world with regional music and instrumentation has become a tool for producers to re-contextualize and present their own heritage to newer and younger audiences in and outside of Brazil, while creating an inimitable party scene that prioritizes the sounds of the underground.

This is especially true of Northeastern Brazil, where producers have been cooking up a revolution in Salvador de Bahia grounded on a shared love of heavy bass. Mixing styles like pagode, axé, afoxé, arrocha, ijexá and samba reggae, with trap, baile funk, house, moombahton and hip hop, producers have created music destined for the dancefloor that celebrates the diversity of Bahia idiosyncrasy while reflecting on the hardships and triumphs of their daily life.

These artists are often grouped under the umbrella term Bahia Bass, created by Mauro Telefunksoul in 2014 after curating and launching a compilation of the same name in Renato Martins’ now defunct label, Braza Music. The compilation served to group artists that were operating under a similar framework, like DJ Werson, Som Peba, Loro Voodoo, Lurdez da Luz and Capitão América, to name a few. But according to Maga Bo, co-founder of Kafundó Records, the foundations for the scene began bubbling a few years earlier on Facebook, with a group of producers, including himself and Lucio K, gathering to discuss and work with “Brazilian music made for the dancefloor.”

“The Bahia Bass scene is mostly an underground scene of artists that are looking for inspiration outside of Brazil as far as production values, but are looking locally for rhythmic, harmonic and melodic inspiration,” Maga Bo explains. “It’s not necessarily a genre and it eschews a cut and dry definition because it groups so many different styles of music.”

Here are some of the most interesting producers pushing Bahia music forward. 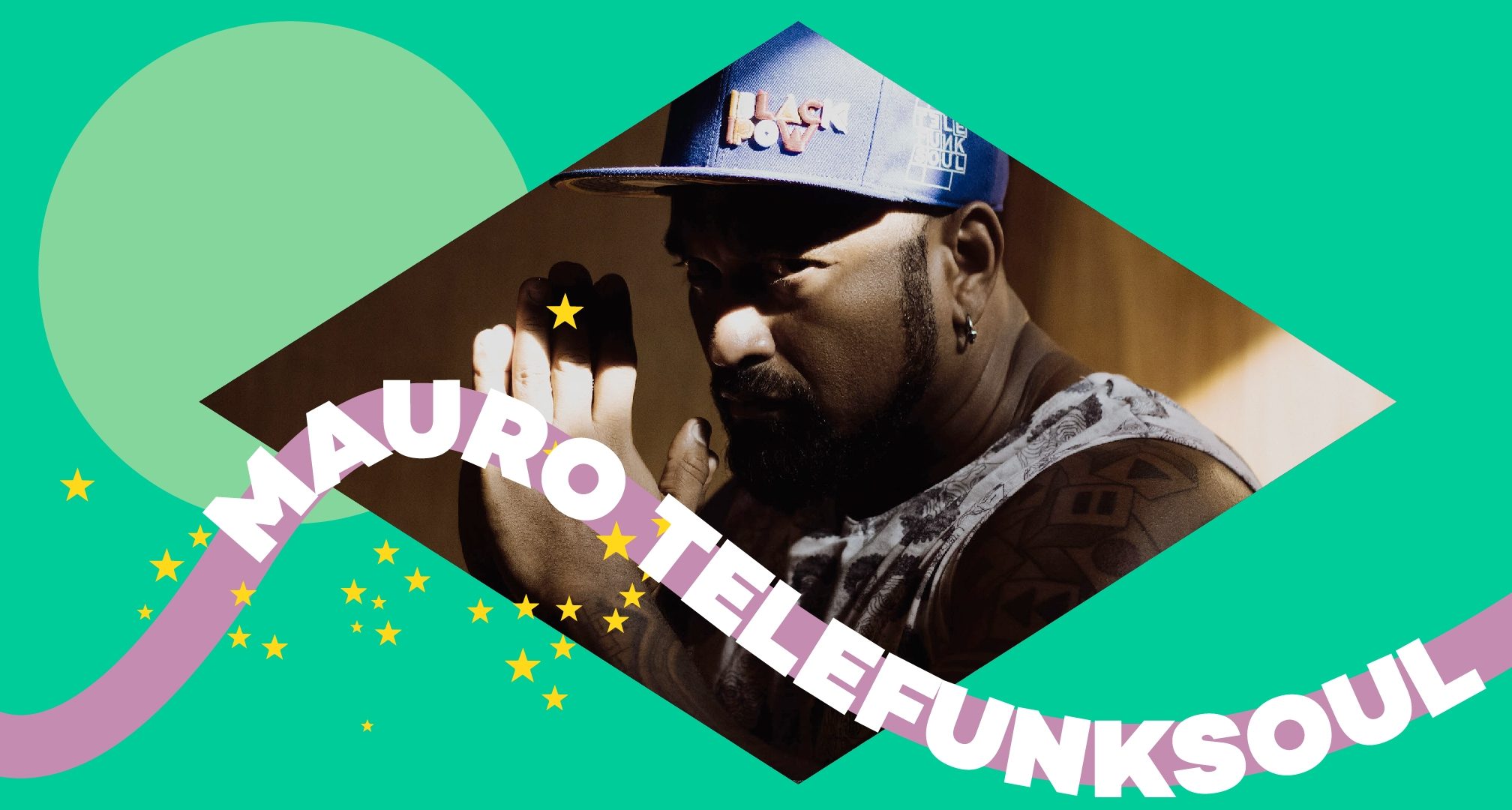 Telefunksoul has been through some of the most important facets of the Bahia electronic music underground, as an artist and a pioneer of the early 90s drum 'n' bass scene. He began his career at 16 years old in 1992, DJing in open format when, as he tells it, it wasn’t in fashion. “They called me crazy for playing drum 'n' bass and mixing all types of music on the dancefloor. Now it’s all the rage,” he explains. “I like variety.” This penchant for experimentation led him to turntablism and playing with touring live bands like Porcos Falantes, Zambotronic, and Negra Cor. It was touring with Negra Cor that opened his eyes to the possibilities of mixing Bahia music with other popular genres. Before long, he started incorporating arrocha and samba reggae loops into their music. But the idea finally crystallized in his head in 2006, after seeing DJ Patife perform. “He played live [in Salvador] with Cortejo Afro and recorded a song with them called ‘Made in Bahia’ featuring the London MC Fats Watkiss,” he says. “That track burned itself into my brain. The syncopated beats of drum and bass mixed with samba reggae drove me crazy. I started thinking that everything was possible.”

After recognizing that peers like Lord Breu, Som Peba, and A.MA.$$A were producing similar music, he decided to start collecting their works, along with Renato Martins of the popular Funk Na Caixa blog and Braza Music. The resulting compilation series, Bahia Bass has three volumes that served to map the constantly changing soundscape of the Bahia Bass movement. “The purpose is to show [Bahia] music to the world in the most aesthetically rich and diverse manner,” Telefunksoul explains. “I’m working to make this movement grow.” 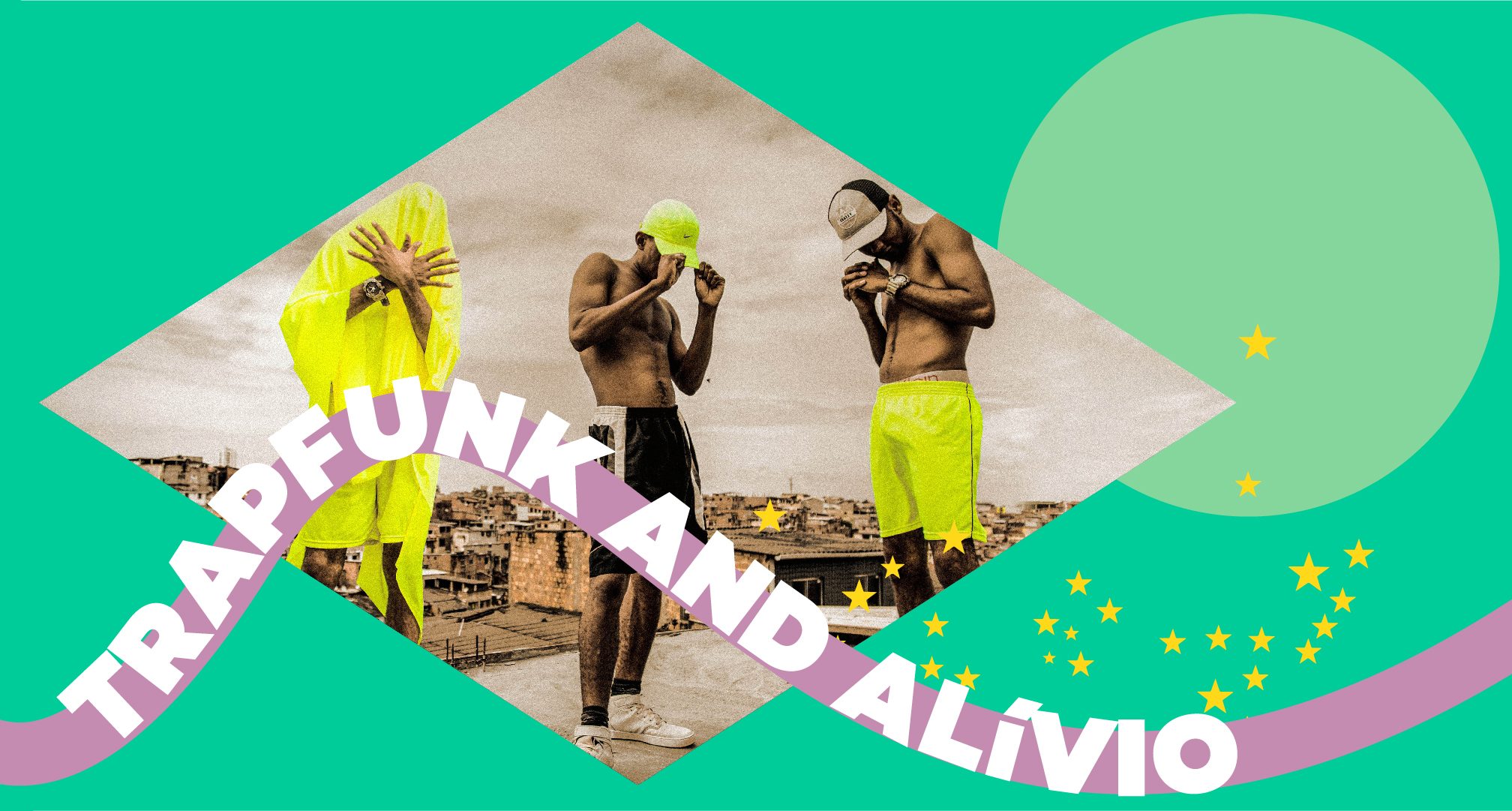 Between 2011 and 2012, local artist Felipe Pomar taught a music production workshop in a youth center in the Northeast of Amaralina, his neighborhood in Salvador de Bahia. After realizing the wealth of talent in his workshop, he took some of the best students – most of whom were finger drumming and making funk carioca – and formed TrapFunk & Alivio. They began meeting at his house to experiment mixing a cappella funk vocals with deep house and other rhythms, until they landed in the winning intersection between trap and funk carioca. According to Pomar, they use trap as a label so that people can get a better understanding of what to expect when hearing their tracks, but the exploration goes deeper. “We’re deconstructing our regional music,” Pomar says. “Every day, we’re discovering that we can develop rhythmic relationships between electronic music and the music of different regions in Brazil. This gives us the opportunity to create different avenues for reconnection with our own culture.”

Through it’s vibrant photography work, graphic design, and collaborations with artists like Keila (formerly of tecnobrega group Gang do Eletro) and New York MC and producer Kashaka, the collective –now formed by Pomar, Mannolipe, DJ Alle-X, and live vocalist MC Sagat– is looking to build musical and cultural bridges between Bahia and the rest of the world, while also telling stories of triumph over adversity. “[We started this in response to] the socio economic challenges of poor, Afro-Brazilian youth in the favelas,” Pomar explains. “TrapFunk & Alivio is a continuation of the principles behind funk carioca and most of Brazilian popular music. In Brazil, artistic interventions are a “cry of resistance”, born with the purpose of reacting, suggesting, stimulating, moving, transforming.” 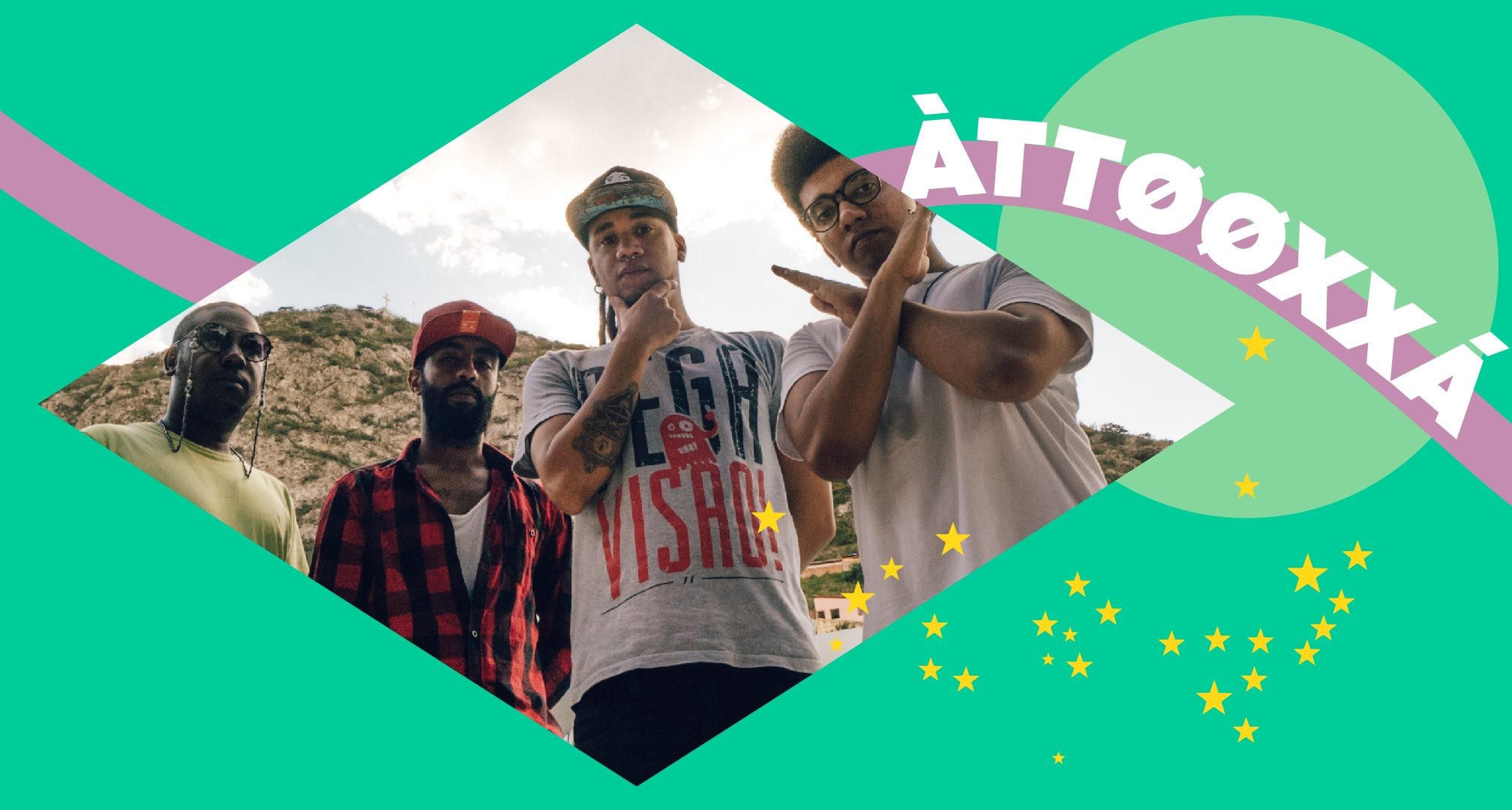 Rafa Días has been linking Bahia rhythms with music from other parts of the world for the past eight years in both Salvador and his hometown of Paulo Alfonso. First in groups like Braunation, Os Nelsons, and A.MA.$$A, and now as a solo artist –with plenty of collaborators– under the moniker ÀTTØØXXÁ. His mission is to take pagode –a subgenre of samba that uses instruments like banjos, the small cavaquinho guitar and synthesizer keyboards– into its rightful place in the Brazilian pop sphere, but with a bigger punch and harder bass. “Bahia has always been drawn to that bass sound, but that desire has never been studied or taken seriously,” Días explains. “Samba reggae is composed with bass drums. Samba de roda –which is one of the founding rhythms of Brazilian popular music– has the surdo, which is a super heavy bass drum. Even though the bass exists in our DNA, this frequency has never been thought of as something that stimulates the body. ÀTTØØXXÁ emerges to prioritize the bass, to bring it to the forefront and make it stand out in pop music.” ÀTTØØXXÁ, which roughly translates to “turn that shit up,” makes infectious party music that’s meant to create a new identity and promote new ideas about life in Bahia as Afro-Brazilians. 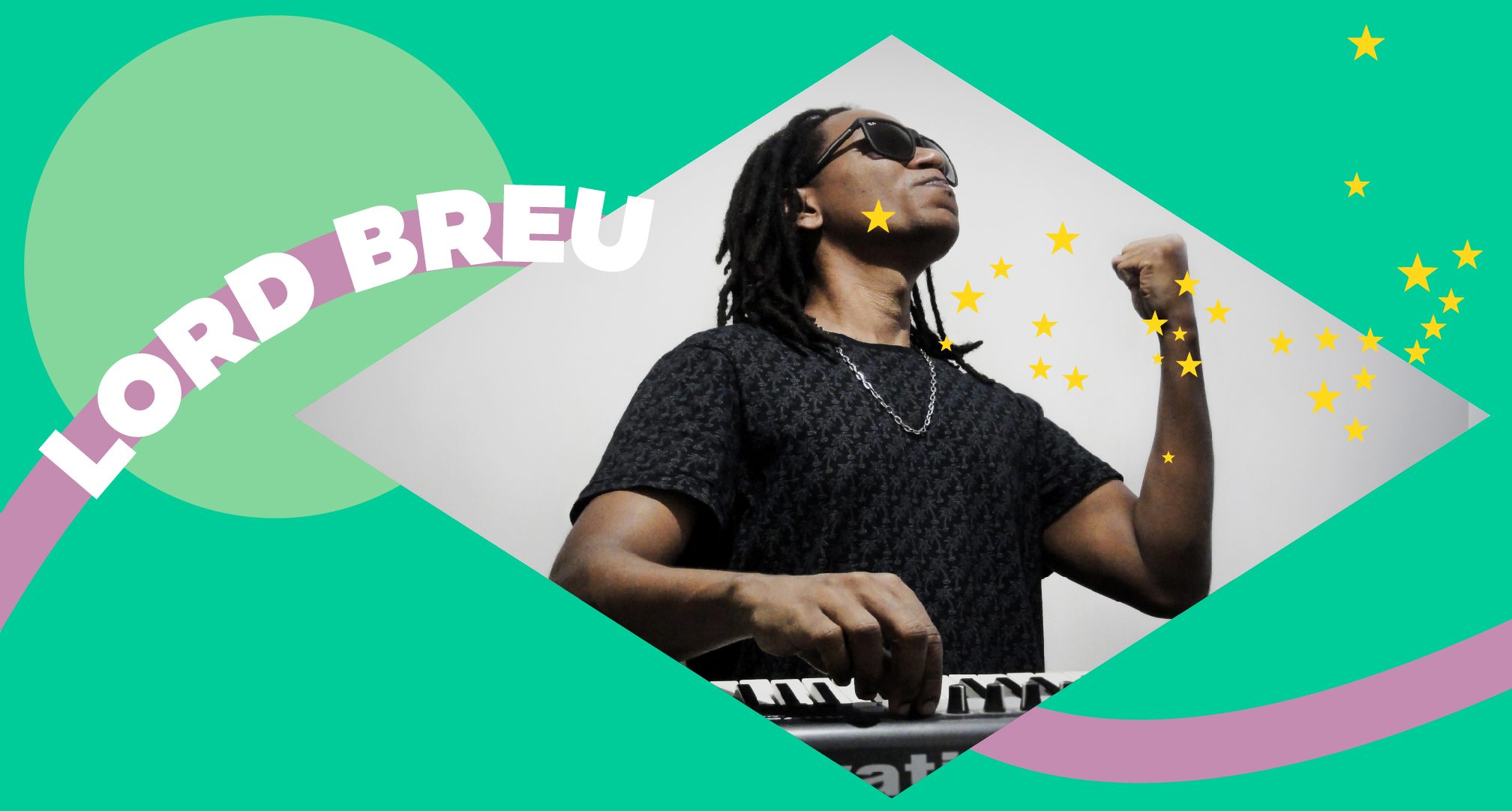 Claudio Araújo has been making the rounds since the late 90s, getting his start by producing beats for a local hip hop group, but it was in 2004 that Araújo reinvented himself into Lord Breu –king of the dancefloor. His mixture of bass, ijexá and samba de roda percussion, with moombahton, hip hop, 8-bit, house, and R&B has been compared to similar styles being done by Caribbean electronic music producers. All of this meaning that his productions are fast paced, super tropical, and drenched in warm beats meant to translate into sound the spirit and way of life of Bahia’s citizens. After DJing and mixing drum and bass in the Bahia scene, he found common ground with the ideas proposed by the Bahia Bass movement, and that gave him the push to focus his production on the rhythmic patterns of Northeastern Brazil. “This mixture of rhythms is becoming so much more natural [for us],” he says. “The traditional rhythms of Bahia have so much in common with traditionally Black styles and with the music that is coming out of the global bass culture. It’s the same musical language. [...] [This fusion] is important because it gives continuity to our culture. It gives us a way to expand our unique cultural expressions and spread them all over the world.” 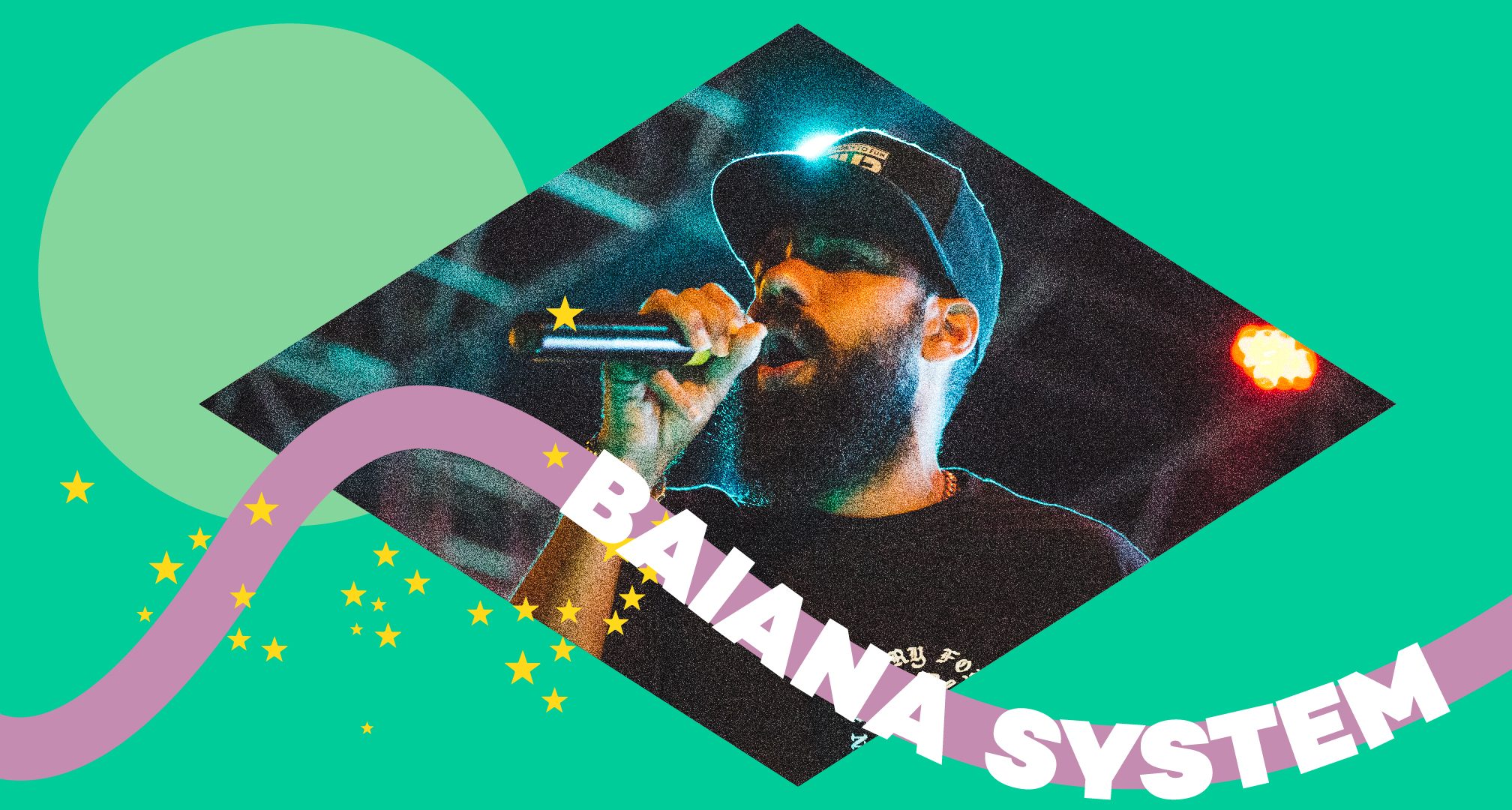 BaianaSystem can also be considered pioneers when it comes to the marriage of Bahia music with other Caribbean rhythms. They’re called a “sound system” for a reason –taking from Jamaican sound system culture, dancehall, and dub, the band managed to, not only create a project that could withstand constant collaboration and lineup changes on the fly, but also that could introduce the sounds of the guitarra baiana, pagode, afoxé and the distinct swing of Bahia percussion into electronic music production. Initially founded in 2009 as musical and visual project by guitarist Roberto Barreto, bassist Marcelo Seco, vocalist Russo Passapusso, and visual artist Felipe Cartaxo, the group has gained tons of international attention with their unique production methods, their use of masks and complex visuals during performances, and meticulous study of Bahia culture. The cut “Playsom” from their 2016 album, Duas Cidades, became a sleeper hit when it was featured on the wildly popular video game FIFA 2016. Much like ÀTTØØXXÁ, the members of BaianaSystem have distanced themselves from the “Bahia Bass” label, partly due to its limiting connotations.

Amaya García is a freelance writer gravitating between Houston, Texas, San Juan, Puerto Rico, and New York City. Find more of her work here and follow her on Twitter.