Rubin went on to mix Justice’s single ‘On ’n’ On’ in 2012 (the ‘Ruined by Rick Rubin’ mix). Meanwhile, Justice themselves were initially no slouches in the remix department. Following the success of their Simian remake they were in huge demand, remixing artists such as N.E.R.D, Britney Spears, Daft Punk, Fatboy Slim, Justin Timberlake – even U2.

If the remixes hinted at their talent, their 2007 debut single ‘D.A.N.C.E’ and album ‘†’ made it clear Justice were ripping up the rulebook, reinventing dance music as something noisy and ebullient. Their live show was also a phenomenon and took them all over the world. By 2012, in the wake of their second album, they were in the position to headline America’s premier music festival, Coachella. Along the way, they’ve fired out two live albums, one to accompany the A Cross The Universe ‘documentary’ in 2008, and Access All Arenas in 2013. 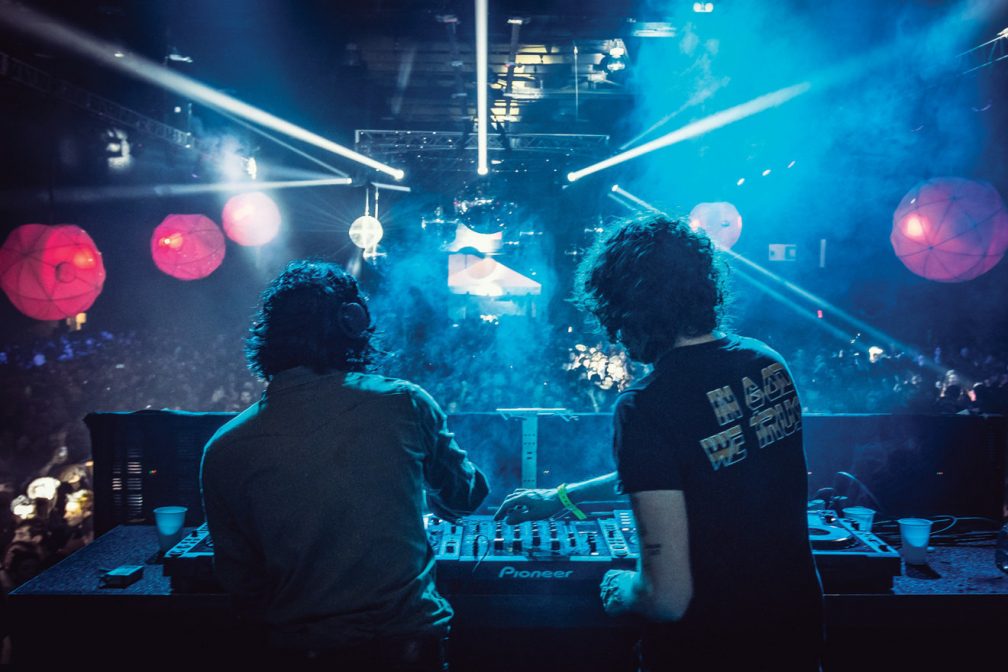 Since then, things have gone quiet. As they make abundantly clear, they’re a band that fires into action only when they fancy it, maximizing use of the periods when Justice are active.

“There were no leftover tracks [from the year-and-a-half long sessions for the new album],” says Gaspard, by way of example, “When we’d made five tracks, we thought about what was missing, and worked in that direction.”

“We work to a purpose,” adds Xavier, “and we value our time.”

As the interview draws to a close Mixmag asks the duo what the best thing is about being Justice.

“Hearing our music first!” jokes Xavier, then ponders the question more seriously. “One thing I know is I wouldn’t swap my life for anyone else’s. We could be younger, more successful, richer, but I’m perfectly happy and a lot of that comes from the fact I’m part of this band.”

“The best thing,” Gaspard concludes quietly, “is that we are still the closest of friends after fifteen years, which doesn’t happen a lot in this industry.”

The best thing for the rest of us is that Justice are back. The leather can’t be too far behind.