Gaspard Augé is dressed entirely in white denim. It seems incongruous, and takes a while to get used to. He is, after all, the hairier, more rock star-looking half of Justice, a duo usually seen in biker jackets and black T-shirts. “Less leather, more pleasure,” he deadpans.

“It’s funny,” adds Xavier de Rosnay, whose Paris home we’re in, “we’ve been confronted about this before. Touring the first album, one day we performed in denim jackets and people were massively complaining, saying, ‘What is this scam? Where are your regular jackets?’ It was disappointing for them picturing us on stage that way.”

“They hadn’t had the full Justice experience,” states Gaspard, dry as sand.

“It must be like seeing AC/DC and Angus Young isn’t wearing his schoolboy shorts and cap,” says Xavier, who has darkly handsome pop star good looks. “We felt the same when we saw Slash and he didn’t have his top hat. He was wearing a tracksuit. It felt like we were getting half the product.”

Gaspard looks his white denim ensemble up and down. “It’s like a snake changing its skin, I guess,” he sighs.

As Gaspard suggests, Justice are returning renewed: a third iteration of the band for a much-anticipated third album. All the focus on clothing is more than idle chatter. Presentation and style have been one of the keys to their success. Early tours, amusingly captured in the 2008 film A Cross The Universe, saw them rewrite the book on how the USA perceived dance music. Looking like a couple of film star Hells Angels, playing in front of wall-to-wall Marshall speaker cabinets and a giant neon cross, they tore the lid off venues coast-to-coast with the caustic electro-disco of their debut album, ‘†’. They made dance music rock ’n’ roll, rendering it so that America could really get stuck in, and becoming a lynchpin of the burgeoning EDM movement. Skrillex would certainly say so.

“Our arrival in America was a statement,” Xavier agrees, albeit tentatively. “It said that this music is not so serious, but it’s powerful – harder than anything you already think is hard music.”

With Justice’s second album, 2011’s ‘Audio, Video, Disco’, they dived into their own prog fantasies, mashing electronic dance music into 1970s rock flavours so that unlikely comparisons to The Who, Queen, and even Iron Maiden flowed their way. It
was the mark of a band determinedly doing their own thing. They still are, as was announced by the slap-bass, strings and catchy chorus of the 2016 single ‘Safe And Sound’, the opening track to their new album, ‘Woman’.

A leap onwards from ‘Audio, Video, Disco’, ‘Woman’ features a choir and an orchestra, as well as Johnny Blake of Zoot Woman, French singer Romuald and regular collaborator Morgan Phalen. It starts with a quintet of tracks that explode joyfully with steroid disco-funk: the galloping Gary Numan-meets-Frankie Goes To Hollywood rush of ‘Alakazam!’; the ridiculously catchy ‘Stop’; the pure disco frolic of ‘Pleasure’. Things then become more wayward, more out-there, from the grand baroque of ‘Heavy Metal’ to the lovely twinkling synths on final cut, ‘Close Call’.

“At end of the first half it becomes more free and adventurous,” explains Gaspard.

“The first half is more pop, the second more free-structured,” Xavier concludes. 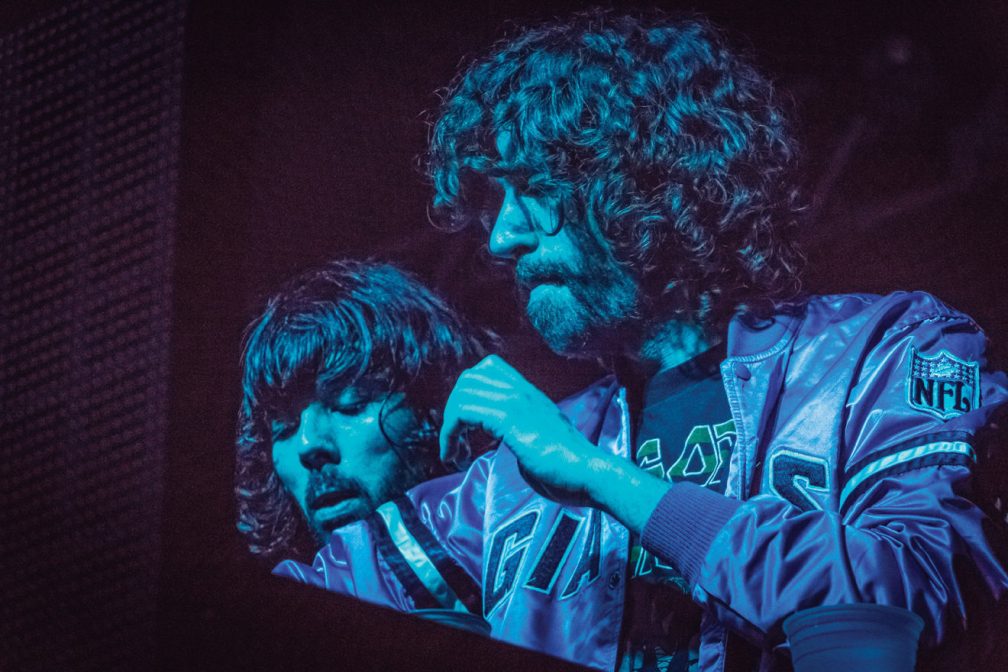 We are sitting around a table in Xavier’s Paris apartment, an airy, open-plan affair, all exposed wooden beams and metal girders, containing the studio where the album was made. One corner has hordes of records on the floor – Aphex Twin, Todd Rundgren, the soundtrack to the film The Shining, etc – while the walls have posters that range from Pink Floyd’s ‘The Wall’ to Chewbacca to a framed carpet featuring US president John F Kennedy and his brother Robert. A nearby table contains an array of gin decanters and a book by Martha Graham entitled, appropriately enough, Mémoire de la Danse.

“’Woman’ is a very powerful, beautiful word,” he ventures. “If we’re honest with ourselves, much of what we do is mostly to please women or make them proud of us. It’s a tribute to the women in our lives; mothers, daughters, lovers, friends, collaborators.”

And the lyrics on the new album also seem to be moving in that direction...

“We didn’t ever do a proper a love song before,” says Gaspard, “but on this record I guess it’s the underlying theme.”

We talk around the album for a while. As with their last album, Mixmag is the first to hear it outside Justice’s immediate circle, and they’re keen to exchange opinions.

“We’re not obsessed with being only analogue,” Gaspard says. “We have a strong computer music culture. With synths we always process them to the point where they’re totally remote from their original form.”

They are a somewhat enigmatic pair, attentive but very self-aware, funny but sometimes elusive. Gaspard has less English and doesn’t talk as much as Xavier, but when he does, it’s usually to make a definitive statement, rather than Xavier’s more general hypothesising. The best way to capture their dynamic is, perhaps, to eavesdrop on the conversation…