1995 is a standout year on New York's hip hop timeline. Mobb Deep released their debut album 'The Infamous', Wu-Tang Clan's Ol' Dirty Bastard, Raekwon and GZA dropped their first solo albums and the Golden Age of hip hop was deemed to be coming to an end. On January 20 of the same year, though, saw the birth of Jo-Vaughn Virginie Scott, the first of his immediate St. Lucian family to be born in the United States. First known online as JayOhVee, he's now recognised worldwide as the self-proclaimed 'swank' rapper Joey Bada$ – at 17, singled out as the sole figure behind a 'golden age' revival – who's headlined shows around the world, supported Disclosure on tour and collaborated with fellow New Yorker A$AP Rocky alongside Kendrick Lamar and Danny Brown.

Although it was his debut mixtape, '1999', that fully announced his arrival, it was a freestyle when he was 15 years old that caught the attention of the internet generation. Still studying at Edward R Murrow High School in Brooklyn (alumni including Adam Yauch of the Beastie Boys and artist Jean-Michel Basquiat), a video of a swagger-flexing Joey was uploaded to YouTube before winding up on viral mecca World Star Hip Hop. Jonny Shipes, CEO of Cinematic Music Group, quickly became his manager and, in 2012, came the irresistible skater boy rap jam 'Survival Tactics' from '1999'.

Even though hip hop's golden era had lost its shine by the title's year, the crisp daydream beats (two courtesy of MF Doom) and his tight lyrical flow clearly recalled the tunes playing on New York street corners in the early to mid-90s. The 'Summer Knights' mixtape arrived a year later, followed by an EP of the same name on Relentless Records (home to Bondax and Julio Bashmore), and, after almost a year of social media foreplay, the announcement of his debut album 'B4.DA.$'.

"The only thing I did wrong, and the reason people thought it took so long, is 'cause I let people know what the title of it was," he tells us over the phone, a distinct lack of enthusiasm in his voice. "It didn't take long for me to write!"


It seems that the delay has been forgiven, judging by the 2,000 people packed into the 112-year-old Shepherd's Bush Empire. "I can't believe you're all here and I've not even released an album yet, I love you all!" he shouts to the mostly snapback-wearing, weed-infused crowd. And it's not just London that he's sold out. Every ticket for each show on the seven-date UK tour was snapped up, with gigs across Europe, Australia and New Zealand also behind him. Wrapped in a red leopard print puffa jacket, his energy mirrors that of a five-year-old on Christmas Day as he opens with 'Alowha', his six-foot-plus figure bounding from left to right and his mop-style braids bopping up and down.

Confidence and youthful arrogance shine through his repeated chants of "what's my name", a trait he's had "since little school". It was during this time he'd watch videos of Notorious B.I.G. at home in the East Flatbush area of Brooklyn – other notable residents include Busta Rhymes and Michael Jordan until he was two – that set him on his path in hip hop. "Shit like that really inspired me," he tells us. As did poetry by Eleanor Roosevelt, Maya Angelou and jazz poet Langston Hughes, all doubtless aiding his innate and rhythmic lyricism. 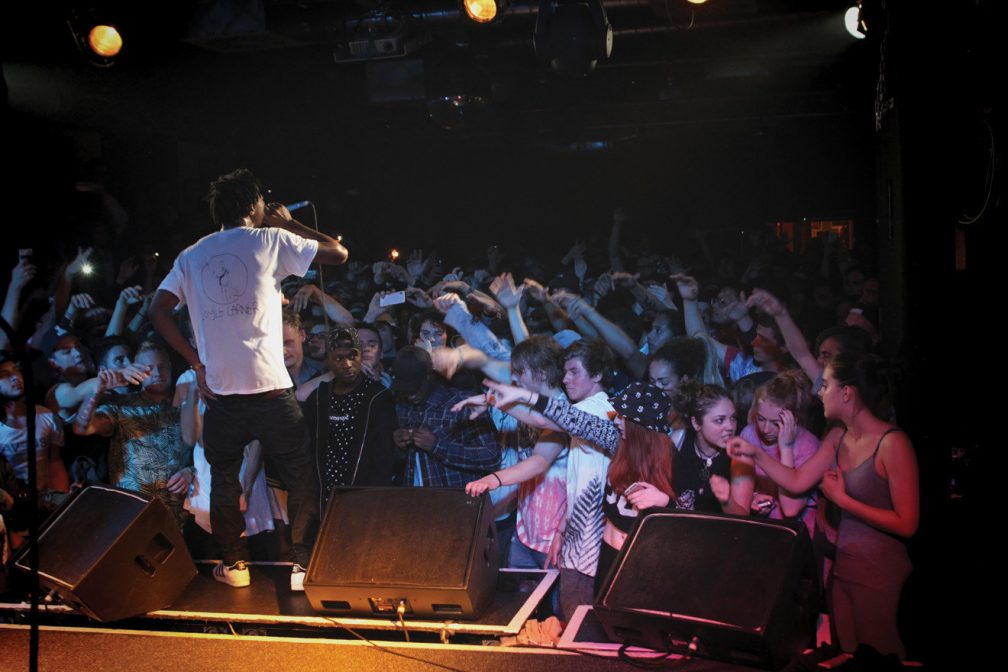 Despite having the air of a moody teenager about him during our time on the phone, there's one name that snaps him into life: J Dilla. Earlier this year he was given one of the producer's unreleased beats to make 'Two Lips', released by Truth Studios alongside Akomplice Clothing, and he recently donated $10,000 worth of the profits to his old school in the form of musical instruments.

"That right there was one of best experiences of my life," he says. "When I was working on this project, I really felt his presence and that was a beautiful experience. I was honoured to be part of it and give some of the proceeds to my school."

Joey's sensitive side shines through at the Empire show, too. In between performing the raucous '95 Til Infinity' and new album track 'On & On' with Maverick Sabre, he asks for a minute silence for his friend Capital STEEZ, who died of an apparent suicide on Christmas Eve 2012, before departing after a lengthy speech explaining how "you can do anything if you put your mind to it".


He might have buckled had his mind wandered a few years ago, but his outlook's keeping him on track. "As long as I keep doing me I should be good, right?" he asks. It certainly looks that way.