The whole photo crew steps out of the studio for a moment to observe the ominous peripheral hum of a dozen LAPD whirlybirds floating in the skies above downtown Los Angeles. They are spotlighting the heated public protests in lieu of the controversial conclusion to the Ferguson trial. Back in the studio, a gentle, unassuming Henry Steinway sits alone in a red glow, released for a moment from the prying attention of the cameras and crew.

The protests rage on into the following night when Steinway takes to the stage of Downtown's newly renovated Regent Theatre as his bassy hip hop alias RL Grime. The lights drop and his 8-bit tank control visuals flash on screen. The tinny rush of drums and the lush, arpeggiated scatter of his new track 'Scylla' send static through the hairs on your neck. The all-ages crowd of Fairfax rudeboys are kushed and Red Bulled, primed for the immense drop and saw-toothed horns that have become ubiquitous elements of this artist's sound. And when that deep, lagging bass hits, arms fly in the air and the room explodes.


The line-up for the first full WeDidIt label party in almost two years is a closely guarded secret. The collective sold all 1,300 tickets on the strength of their reputation alone, and while the bill features scene heavyweights such as label co-founder Shlohmo and rising downtempoist Purple, RL Grime stands out as the centerpiece of a young imprint/collective that's redefining the electronic-fused hip hop genre faster than any other.


"They have no idea I'm on the bill tonight," the tall, softly spoken producer tells Mixmag before the gig. "I tried to throw them off. I sent out a tweet yesterday being all like, 'Next stop Australia'. Everyone is here tonight because it's a WeDidIt party, not because of any big names. Some of those kids have been lining up outside since eight in the morning!" But not everyone is fooled: "I knew it'd be him, dude," shouts one 17-year-old fan over the thundering bass. "I fucking knew it!"

Coming to the reunion off the back of a year that's seen him gatecrash the EDM-heavy main stages at America's biggest festivals and ship his debut album 'Void', a record that has already yielded some major releases and announced him as one of his genre's most progressive artists, RL Grime is one of the hottest properties in dance music. 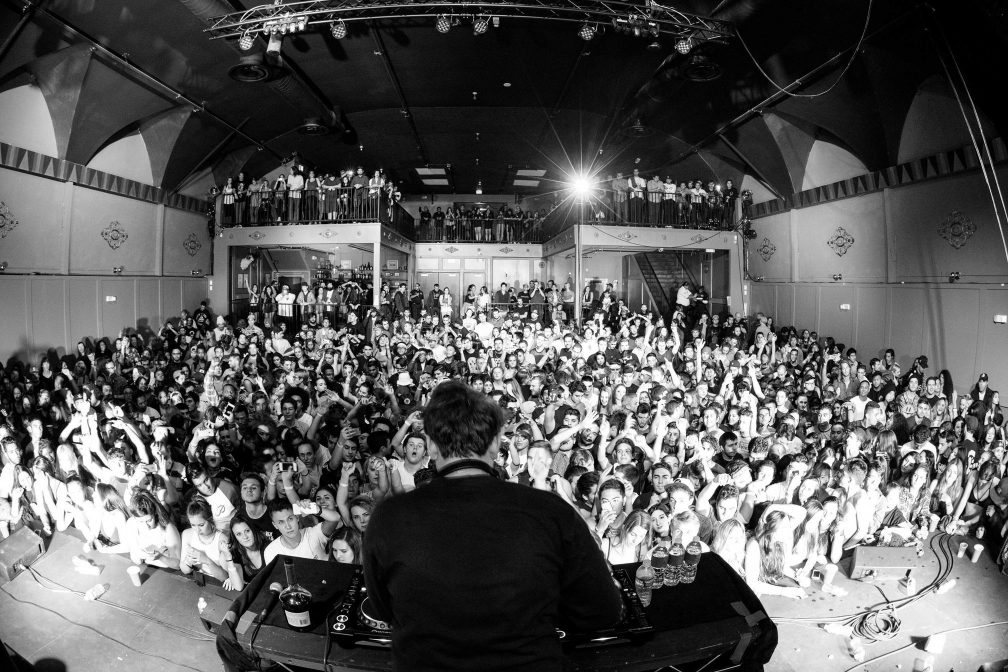 Born in Century City in LA's sunkissed Westside, the pale, angular 23-year-old found his way into music through an early love of 00s party rap and the grinding electro house sounds of Justice, Boyz Noize and MSTRKRFT. A summer spent at a turntable class, and the support of his creative parents – an architect and a fine art photographer – set him off to high school house parties with a group of close friends and a record box full of bangers.

"We'd go to kids' houses whose parents were out of town, set up some speakers and tear the place up. Henry Laufer (Shlohmo) and Nick Meledandri (Nick Melons) were doing the same thing. Though we didn't know each other at the time, we were all playing that mix of hip hop and electro house in LA."

WeDidIt was started in 2007 by Meledandri, Laufer and (now departed member) Joe Marcus as a name to perform under. It soon developed into a party collective and a record label, as they enlisted close friends and young local artists such as D33J, Groundislava and his brother, locally infamous visual artist Sus Boy, and the crew started making waves on the underage Westside party scene.

In 2010 a chunk of the group migrated to New York for university, and Steinway's manager Mason Klein eventually introduced him to Melons. At that time Steinway was operating under his progressive house moniker, Clockwork, and had already enjoyed considerable success with releases on Dim Mak and Mad Decent – as well as stitching up a sinister bootleg remix of Avicii's big room anthem 'Levels'. It was this period of transition at New York University that drew Steinway from big-room house and towards the low-slung frequencies of labels like Night Slugs and Hyperdub, and ambient downtempo artists such as James Blake and Boards Of Canada. Frustrated with the limitations of the big room, he started to shift gears and embarked on a project that would fuse the new music he was listening to with the party rap sounds of his teenage years. 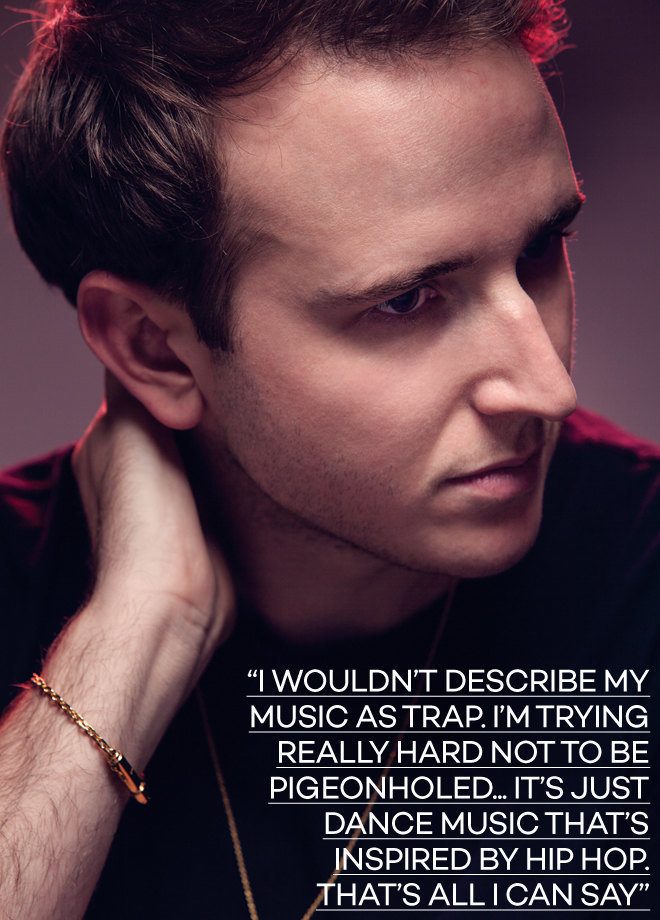 "I started the RL Grime project in winter 2011," says Steinway. "I remember having a vision of what I wanted to do. I started the Facebook page and I had no fans, no music – nothing but an idea of what I wanted it to sound like. All my friends had gone home to LA for the winter break, and I locked myself in my apartment and made the entire first EP, 'Clipz'. It was just me throwing down something new, and pushing myself completely out of my comfort zone."


'Clipz', a self-released collection of stammering, headphone-friendly 808 drills, was distinctly less brash than the music he grew into, though it laid the foundation for the bass-centric productions that would come later. Shortly after its release he and the rest of the WeDidIt massive dropped out of college and returned to LA, where his follow-up EPs 'Grapes' (WeDidIt's first official release) and 'High Beams' on A-Trak's Fools Gold Records, sent the young producer's stock through the roof. Steinway suddenly found himself sharing the spotlight with Diplo, TNGHT, Baauer and Flosstradamus, and was a figurehead of the newly appropriated 'trap' genre.

When middle-class America's kandi ravers became obsessed with the deep bass and gangland rhetoric of a genre previously dominated by acts like Shawty Redd, TI and Zaytoven, a critical backlash ensued. This new breed of culturally removed producers were creating music that some felt retained too much of the racially sensitive elements of hip hop, and the word 'trap', with its intrinsic connections to Southern US crack houses, became a label that many producers sought to distance themselves from.

When we mention the T-word, Henry rolls his eyes, suggesting that yet another ham-fisted journalist has torn open a wound he desperately wishes would heal.

"I'm not rolling my eyes at you, I'm rolling my eyes at the term. Ugh…" he says, shaking his head and looking at his hands stuffed between his knees. "I wouldn't describe my music as trap. I'm trying really hard not to be pigeonholed, and that's what making this album was all about. But literally every genre [name] I use sounds fucking stupid: 'bass music', 'future bass'. It's just dance music that's inspired by hip hop. That's all I can really say."

While some of his earlier music and remix projects might have straddled that line between cultural misappropriation and innovation, his debut album 'Void', released in November on WeDidIt, falls firmly into the latter camp, shunning many of the commercially lucrative tropes that have been exhausted by scores of less progressive artists piggy-backing on the genre's popularity. While it contains a lot of the familiar splashing 808 trills, the odd high-pitched vocal line and the ubiquitous tectonic bass lags, it's the eerily silent dips between the drops that really excite. 'Core', 'Scylla' and 'Kingpin' are sure to be among 2015's main stage anthems, but through tracks like the delicate 'Site Zero/The Vault' and the mournful, soft r'n'b homage 'Reminder' (featuring How To Dress Well), Grime has fashioned a diverse record that stays true to its initial concept, and could well be a game-changer in a genre in dire need of a facelift.

Realising the need to bring something unique to the plate, Steinway brought in David Rudnick, a British artist who's designed visual aesthetics for underground heavyweights such as Optimo and Erol Alkan's Phantasy Sound, to help shape the album's concept before he'd laid down a single track.

"David and I sat down together and riffed about visual identities and talked about different ways of approaching an album. We came up with a general concept about the deep sea and the allure of the abyss. We were both drawn to this dark space that's completely isolated and suspended in time," he says. While the calming isolation of the ocean is a central element to the music and the visuals, Rudnick admits that he was drawn to the project by the opportunity to abandon some of the more contentious elements of the genre and help to elevate it beyond the clichés.

"Too much of the scene that Henry was being contextualised against had been built on very ugly, unspoken racial appropriations," notes Rudnick. "I wanted to ground the project in a non-reality equally accessible and equally remote to every possible listener, regardless of their race, status or cultural background."

The visual aesthetic that they eventually settled on was one of mysterious conflict, the videos depicting ominous, angular land drones rumbling towards the ocean and futuristic military 'copters in congested skies. While it might seem hypocritical that a group intending to shun references to street-level violence would so blatantly reference the mechanisms of war, the absence of human beings or violent confrontation creates something oddly peaceful, and mimics the colossal, Wagnerian elements of RL Grime's sound.

Before the Henrys (Shlohmo and RL Grime) go on stage the green room is hotboxed with thick plumes of smoke, and the floor is strewn with empty bottles of Hennessy and Cava. Forty or so young friends bounce and stagger around to the blaring sound of Drake, one of the group's mutual idols. They hang off one another, laughing and embracing everyone around them with a collective warmth that's completely at odds with the stereotypes associated with the scene. 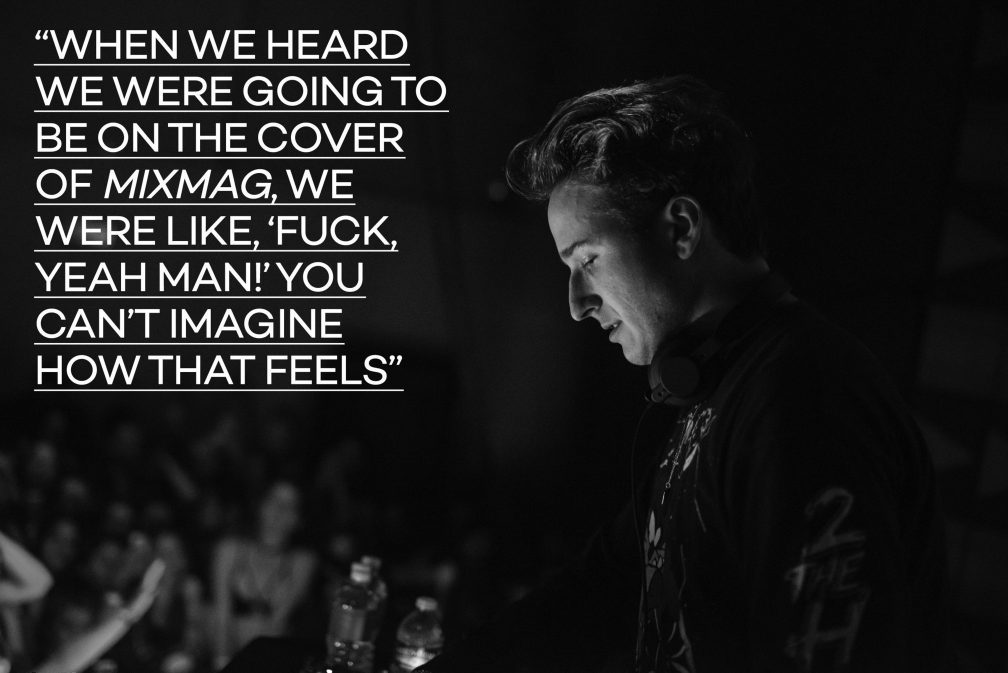 The jovial excitement in the room is overwhelming. Not only is this group of best friends-turned-business acquaintances celebrating a triumphant reunion in their home town, one of their number is about to grace the cover of magazine that they all read growing up.

"You can't know what's like, man," says one member of the original crew. "Because we were kids and our music just a fusion of stuff we knew and loved, we felt like we weren't being taken seriously. But when we heard we were going to be on the cover of Mixmag, we all played that shit cool, but behind closed doors we were like 'Fuck, yeah man!' You can't imagine how that feels."

The WeDidIt crew gradually slur and drip out of the green room to catch Shlohmo hauling the crowd through a trippy, lo-fi wormhole, kicking to life the THC that sludges across the surfaces of many brains. But the onus is clearly on the headliner to surge the bounce into our feet and get the crowd back up again.

As thousands of LA's residents march to the LAPD offices in the fallout of the Michael Brown trial, Sus Boy's eerily apt visuals depicting skeletons stomping on the bonnets of burning police cars give way to David Rudnick's menacing graphics, and RL Grime steps on stage, clad head-to-toe in black. The ensuing hour sees him repeatedly pick up and drop the crowd from enormous heights, bouncing through a 'Void'-heavy set that mixes in bangers from 2 Chainz, Kendrick Lamar and French Montana with some classics from his own back catalogue.

But while his homecoming set leans heavily on his once-signature sound, you can see in him an artist who's prepared to pull his young, devoted fan-base in whatever creative direction he feels like moving in. And when that artist is creating progressive, conceptual music that challenges every cliche and strives to affirm the critical value of a cocktail of UK bass and hip hop, it's plain that RL Grime is taking dance music places it's never been before:
into the void and beyond.

'Void' is out now on WeDidIt