“Fucking bonkers”: The Isle Of Man has been raving safely though the pandemic - Features - Mixmag
Home Latest News Menu

If your impression of the Isle of Man is mostly based on that sketch from The Fast Show, you could be forgiven for being skeptical when someone tells you it’s currently the last bastion of clubbing in the British Isles, and represents a bright future for dance music. But in a basement bar in the island’s capital of Douglas, a mere 2-hour ferry ride from Liverpool, punters are greeted with that very impression - a sight that, in 2021, feels so illicit that it borders on the pornographic: Wall-to-wall ravers of all ages, joyfully spilling drinks, bumping into strangers, and yelling “TUNE, this one!” in each other’s faces while dancing to house and disco.

And while the Isle of Man has a reputation for being a bit rogue (there’s no national speed limit and it’s culturally forbidden to say the word “rat”), this isn’t a case of Texas-style mass Covid delusion, or an illicit “plague rave”: Due to its “crown dependency” status, the Isle of Man is in control of its own Covid policy, and thanks to its swift travel bans, strict lockdowns and famously harsh penalties at the beginning of the pandemic, by June 2020 Covid was roundly defeated and all restrictions were lifted (barring another brief lockdown in January 2021). Unsurprisingly, victory over the virus was cause for much celebration: before you could say “flattened the curve”, the island’s population was back in the pubs and bars, and its burgeoning network of venues, DJs, promoters, record labels and vinyl enthusiasts were getting back to the business of becoming a fully-fledged underground dance music scene. 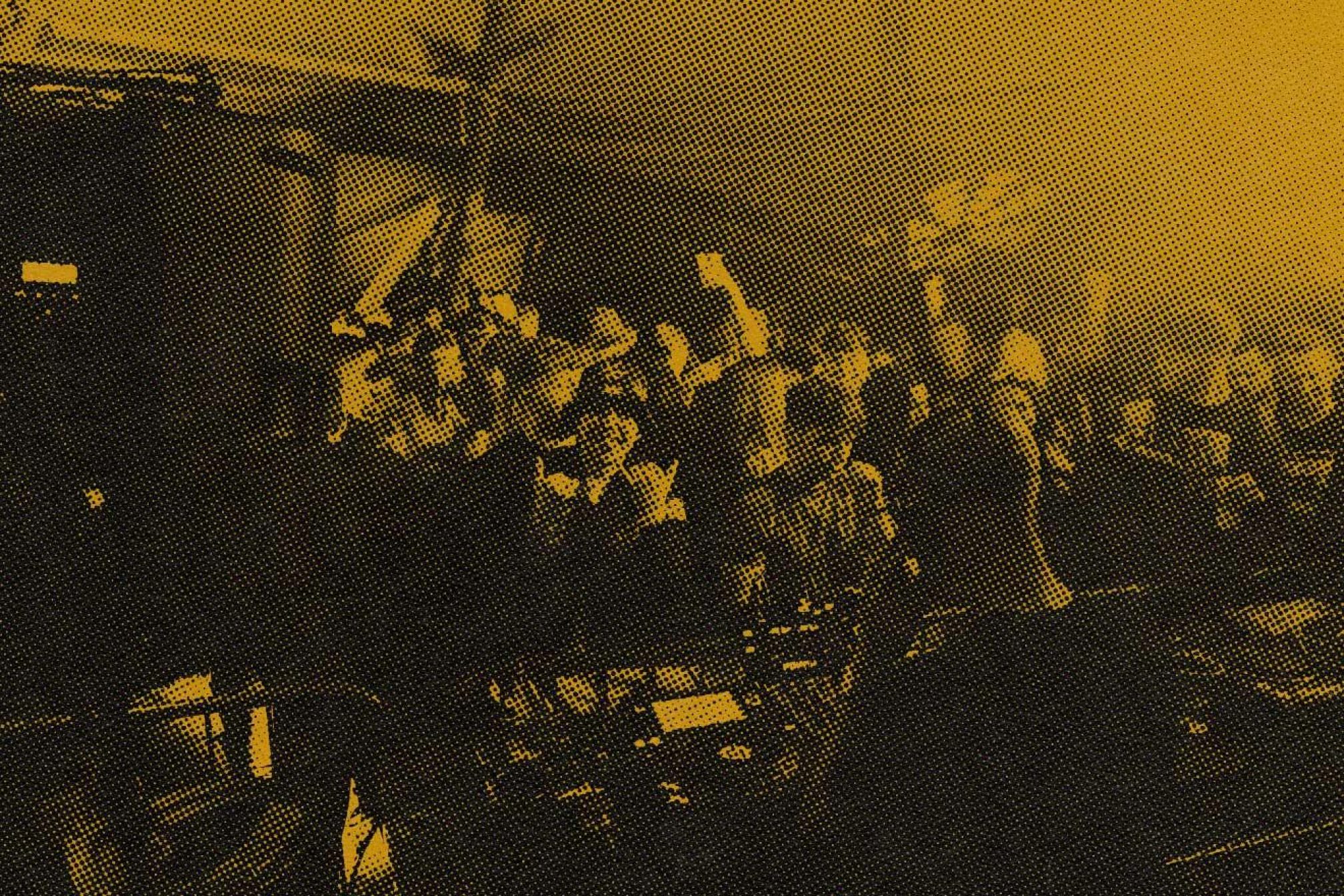 But first of all, the question on every jealous raver’s lips in February 2021: What has it been like living in a Covid-free clubbing utopia for the best part of the last year?

“F*cking bonkers to be honest, a complete whirlwind of a year,” says Jamie Lewis, owner of Peggy’s, a basement venue on the historic Douglas seafront promenade which, with its packed dancefloor and tongue-in-cheek “extra fancy discotheque” tagline, is universally acknowledged to be the scene’s epicentre. “I got so much hate on Instagram in the early days from people back home in the UK that thought we were breaking the [Covid] rules!”

Lewis, who moved to the island from Sheffield 10 years ago to run an upmarket cocktail bar before opening Peggy’s in 2018 (and its adjoining tiki bar, Kiki’s, in 2020), has been cast as the unwitting Moses of this scene, leading a tight-knit group of promoters and ravers through the lockdowns, and ultimately to the promised (club)land on the other side.

“When we closed back in March 2020, it was a case of ‘work phone off, emails off and dodge as many bills as possible’,” he says. “It’s been a tough year clearing the decks. The Manx public have been so incredibly supportive of what we do though, and there’s been a real community spirit to help get us back on our feet when we reopened in July 2020.”

And the island’s nightlife does seem to be well and truly back on its feet.

“It’s weird to say it, but Covid has actually been a bit of a blessing for us,” says 22-year-old local DJ and house producer Michael Moss (aka Lyco), echoing a sentiment expressed by many in the scene, often tinged with a little guilt. Lyco, a resident DJ at Peggy’s who also co-runs a multi-genre club night there called Work In Progress, says that while two years ago “the scene was slowly dying,” the turmoil and eventual triumph of the last year has “given new life to Isle of Man nightlife, a new appreciation of how lucky we are.”

This freedom to party, combined with a captive audience who don’t currently have the option to go off-island easily (plus a large number of students who decided to defer their off-island university courses), has been a boon to the scene. For some, it has given them a glimpse of what might be possible, and accelerated their already grand ambitions.

Globally, the island is perhaps best known for the TT Races: a yearly 2-week motorcycle road-racing festival, now in its 114th year, that sees the population virtually double as bikers from all over the world descend on the island to watch the racing and ride the famously deadly course for themselves. Will Kneale, founder of popular local techno promotions brand Tronik, sees just as much potential in the island’s dance music scene.

Read this next: We spent the weekend raving online

“The Isle of Man used to be a major tourist destination,” says 23-year-old Kneale, who is currently finishing a degree in digital marketing at Liverpool John Moores University. “People used to go out of their way to come here. They still do every year for motorbikes, why not for music?”

He might be onto something. Last September, Tronik hosted REACH In The Tipis, a one-day outdoor mini-festival in the Isle of Man countryside, in aid of mental health charity REACH, where the “recently released from lockdown” fervour combined with the great outdoors in a way that almost called to mind the carefree cheekiness of a Dirtybird Campout in California. Under a modest tipi-style canopy structure, a dozen of the scene’s finest DJs led the 500-strong crowd from disco to minimal techno, capped off with a crowd-pleasing house and tech-house set from Tronik DJs Maleigh Freestone and Connor Hislop - followed, of course, by a packed-out after-party at Peggy’s.

Among those performing was 28-year-old DJ and promoter Andrew Hardinge, known to the scene as Podge, who shares Kneale’s big vision for the future of the island’s dance music scene. Prior to Covid, Podge had been gradually levelling up his bookings, bringing UK acts like Meg Ward and Cassine Bering to perform at his P-MIX nights at (you guessed it) Peggy’s.

For Hardinge, the eventual loosening of travel restrictions will bring a boom in travel to the Isle of Man, and music may well be leading the way: “So far the growth has mainly been babysteps, but there’s going to be more and more leaps of faith every year, and eventually people are going to be coming over to the island to go raving.”

But in the meantime, the island’s scene seems to be doing just fine without any external support: a self-sufficient hermit kingdom of clubbing. But while you might expect there to be vicious competition for the attention of a finite number of punters, it is clear that the growth in the scene over the last few years can be largely attributed to a culture of collaboration, perhaps born of a common goal of tempting people away from the island’s numerous mid-brow meatmarket bars.

Aside from Peggy’s, and the larger, slightly more generic venue The Courthouse, which also hosts underground electronic events, the Isle of Man electronic music scene also coalesces around that other mainstay of local scenes worldwide: the vinyl record store. Sound Records, the first bona fide independent vinyl shop in the Isle of Man in 20 years, has played a crucial role both as a tastemaker and as a social hub for the scene to gather outside of a club environment. In a place like the Isle of Man, which relies largely on sectors like online gambling and finance, entrepreneurs like Sound Records’s Jack Doyle and Jamie Lewis of Peggy’s are key to fostering a uniquely local and long lasting economic sector that doesn’t rely on the island’s unique tax regime.

Read this next: Boris Johnson finally comments on plans for nightclubs

Podge: “We’re definitely building things mainly for the Manx people. When I was 18 I would be going to the same pubs and clubs every week, and the music scene was next to nothing. These days there are all sorts of events, great bands too, and it’s inspiring people to start their own things.”

So, apart from the weather, what’s standing in the way of the Isle of Man becoming the next Ibiza (or at least the next Isle of Wight)?

A lack of young creatives could be a potential issue. With an ageing population, the island (like many small towns across the water in the UK) loses a lot of its most entrepreneurial young people to London.

Read this next: Police called to '200 person rave' that was just a live stream

Jamie Lewis agrees: “As an Island, we have to do all we can to encourage young people to move back here, or to stay or study here.”

As 2021 rolls on, and the Covid situation in the rest of the British Isles hopefully begins to improve, the island will likely begin loosening its entry requirements, potentially making it the best available touring destination for UK dance music acts. 21-year-old Tronik resident DJ Maleigh Freestone thinks that a large dance music event on the Isle of Man could serve as an “Isle of Wight festival for the north of England - it’s just a short trip from Liverpool!”

It’s quite fitting that this small island that birthed the Bee Gees appears to be having a disco-led renaissance (albeit this time with house, techno and drum ‘n’ bass to boot). And in true Isle of Man style, it doesn’t really matter too much what’s going on across the Irish Sea; the Manx scene will just keep doing its own thing.