It's time to erase what you think you know about Palm Springs. The desert oasis, located just a few hours East of Los Angeles, has been historically known for its peace and quiet. Think spas, golf and an occasional poolside margarita or two.

Palm Springs remains at the top of "good weather, relaxing destination" lists, but more and more, that promised peace and quiet has begun to experience some disruptions that definitely can't be ignored. A hop, skip and a jump away from Coachella's home base in Indio and home to a handful of beautifully retro poolside hotels, it's no surprise that both eager partygoers and world-traveling artists have begun to realize the potential of Palm Springs.

Lather up the sunscreen and don't forget to pack a pair of sunnies or two. We've narrowed down some of a music lover's must see hot spots in the desert destination. Here's how to make the most of your summer days, soaking up the sun and good music in Palm Springs.

While Palm Springs' offerings for electronic music have continuously expanded from year to year, it's important to plan ahead for a music-centric adventure to the desert as unlike a big city, metropolitan destination, Palm Springs focuses more on curated shows rather than weekly offerings at concert venues.

A highlight for lovers of house, disco and funk is Splash House, a bi-annual, two-day event that bookends summer in early June and August. Splash House is a multi-venue event that takes over several of Palm Springs' most iconic boutique hotels including the Saguaro, the Riviera and the Renaissance, bringing in both big name and rising talents that know how to get people moving like Justice, Claude VonStroke, A-Trak, Gorgon City, Justin Martin, Anna Lunoe, Chris Lake and more. Each hotel features multiple stages strategically positioned around various pools, making it an absolute California dream.

While Splash House's main programming will provide a perfect day party experience, the best part is that the party doesn't stop there. Most attendees book a room at one of the three participating hotels for easy access for an air-conditioned break or a disco nap, meaning that their energy stays high for the After Hours program of Splash House, which sees partygoers heading to the nearby Palm Springs Air Museum for nighttime sessions on an actual airport tarmac, surrounded by vintage planes for a desert experience unlike any other. 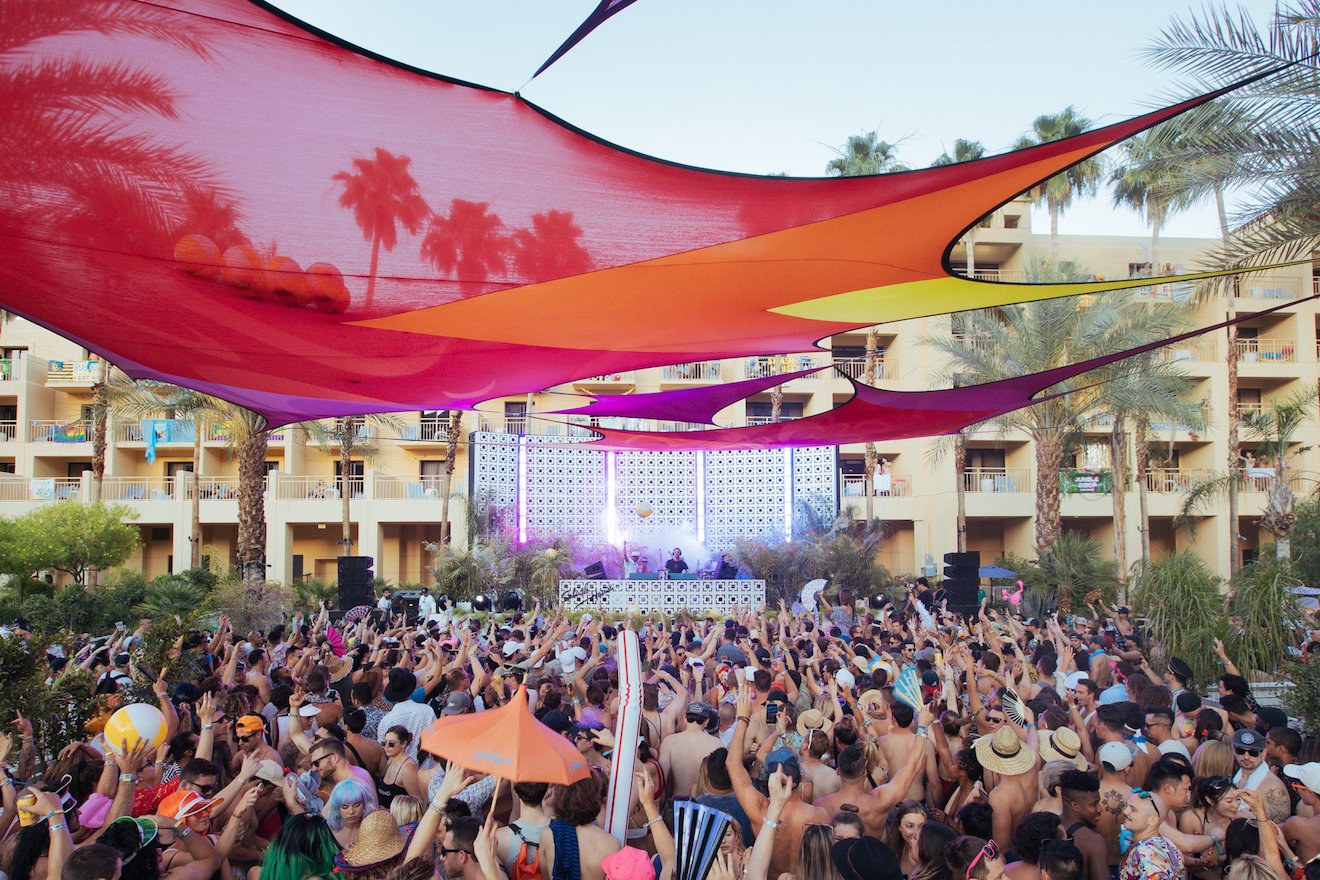 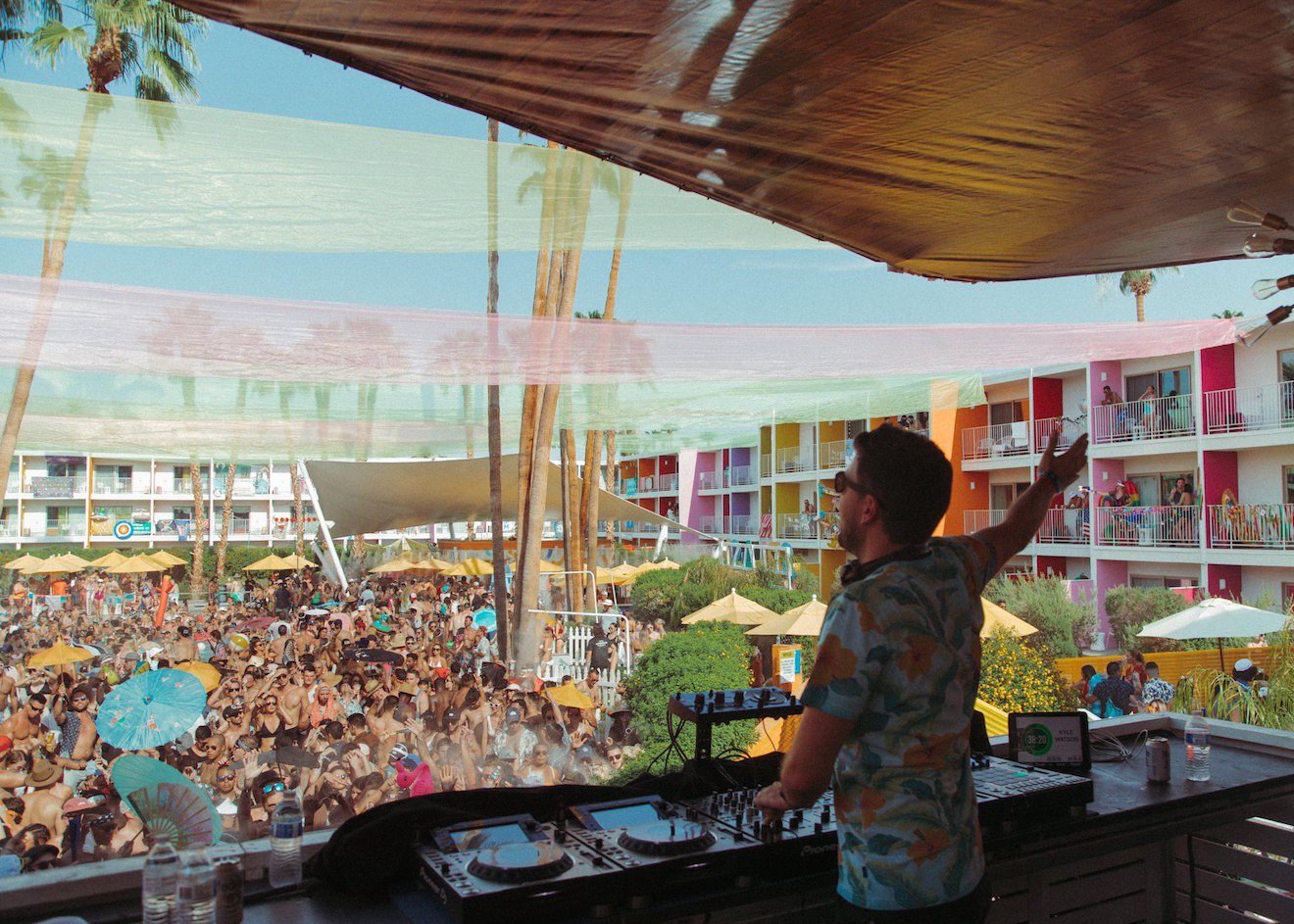 It would be irresponsible to talk about Palm Springs without also giving it due credit to its role as support for Coachella's massive takeover of the desert in April. Of course, the festival itself takes place a couple miles away from Palm Springs in Indio, but with such a heavy influx of artists coming into the area for the two weeks, it only makes sense for Palm Springs to step up and provide some party opportunities for those looking to add a little on around the festival experience.

Hotels like The Ace and The Hilton are transformed during these weeks for various events featuring artists both on and off the Coachella line-up. Each year, Goldenvoice (the promoter behind Coachella) bring a select few electronic and DJ-leaning acts to The Hilton in Palm Springs for a series they call Day Club. From Friday to Sunday, artists like Rufus Du Sol, Nora En Pure, AC Slater and Jauz hold showcases at the hotel pool stage, bringing unannounced friends and collaborators to get the party going early. Day Club provides a nice option for both locals and visitors of Palm Springs, whether or not Coachella is on your agenda.

The Ace has traditionally played host to various parties around the Coachella week, including the beloved Desert Gold party, which proclaims itself as one of the most established Coachella parties. Seeing as its been ongoing for over 10 years, they certainly might have claim to that title. The party offers music that tends to lean left-of-center, featuring eclectic names like Sigur Rós, Nosaj Thing and coveted curators like dublab, NTS Radio, The Do-Over and more.

In general, it's best to keep an eye on hotel venues like The Ace and The Saguaro around the April weeks of Coachella. Beyond the recurring events like Day Club and Desert Gold, each year brings new parties and showcases that range from brunch time pool hangs to late night, secret guest line-ups. 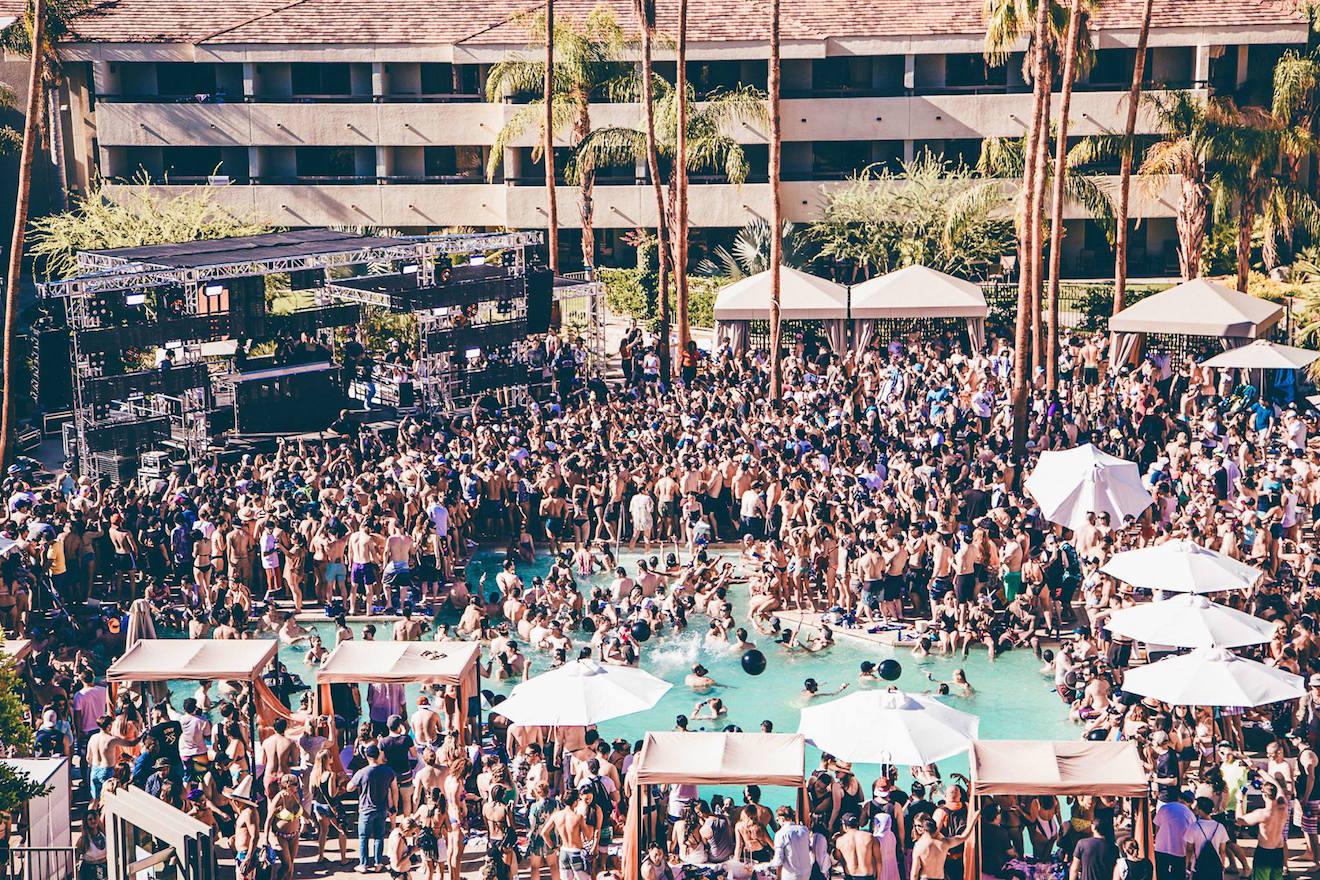 Before young partygoers began paying attention to Palm Springs, the population of the desert city has largely leaned older due to the comfortable climate and relaxing lifestyle. (Hello, golf anyone?)

Don't worry, we're not going to recommend you any golf courses. The bonus of an older demographic calling Palm Springs home is the bonus of great music taste and a sick collection of vinyl to boast about. The desert area is home to a handful of record shops, treasures that you should definitely stop by and visit while you're in town.

gré might not be a typical record store, but it's certainly a destination worth visiting while in town. A coffeeshop and aesthetically pleasing "art house", gré is a perfect place to kill two birds with one stone. Grab a coffee and a pastry for breakfast and squeeze in a browse of their records, books and art for sale. gré offers a dollar record bin and an option to exchange a book for something in their collection. Don't forget to admire the floor while you're here - it's made out of 12" records!

Finders Vinyl is a cute brick & mortar that feels a bit like a permanent garage sale with shelves and boxes filled to the brim with good finds. Charming from top to bottom (including its diner style black and white checker floor), Finders also has a generous $1-3 bin that's probably teeming with steals if you have the time for a dig.

Beyond Palm Springs' increasing electronic music offerings, there definitely are other live music opportunities worth checking out.

The Palm Springs Art Museum offers four floors of contemporary art and a sculpture garden, but also emphasizes its live performances showcased in its Annenberg Theater. It's a medium sized collection that can easily be done in a day for those looking for an air-conditioned break. Plus, it's free entry every Thursday evening and second Sunday of the month!

Another Palm Springs spot is the Purple Room, a supper club determined to capture the magic of the swinging '60s - it even touts that legends like Frank Sinatra, Dean Martin and Sammy Davis Jr. used to frequent the Room during their heyday. Live jazz and comedy performances accompany a classy dinner and cocktails, so if you're in the mood for a classy, nostalgic throwback, Purple Room is the spot for you. 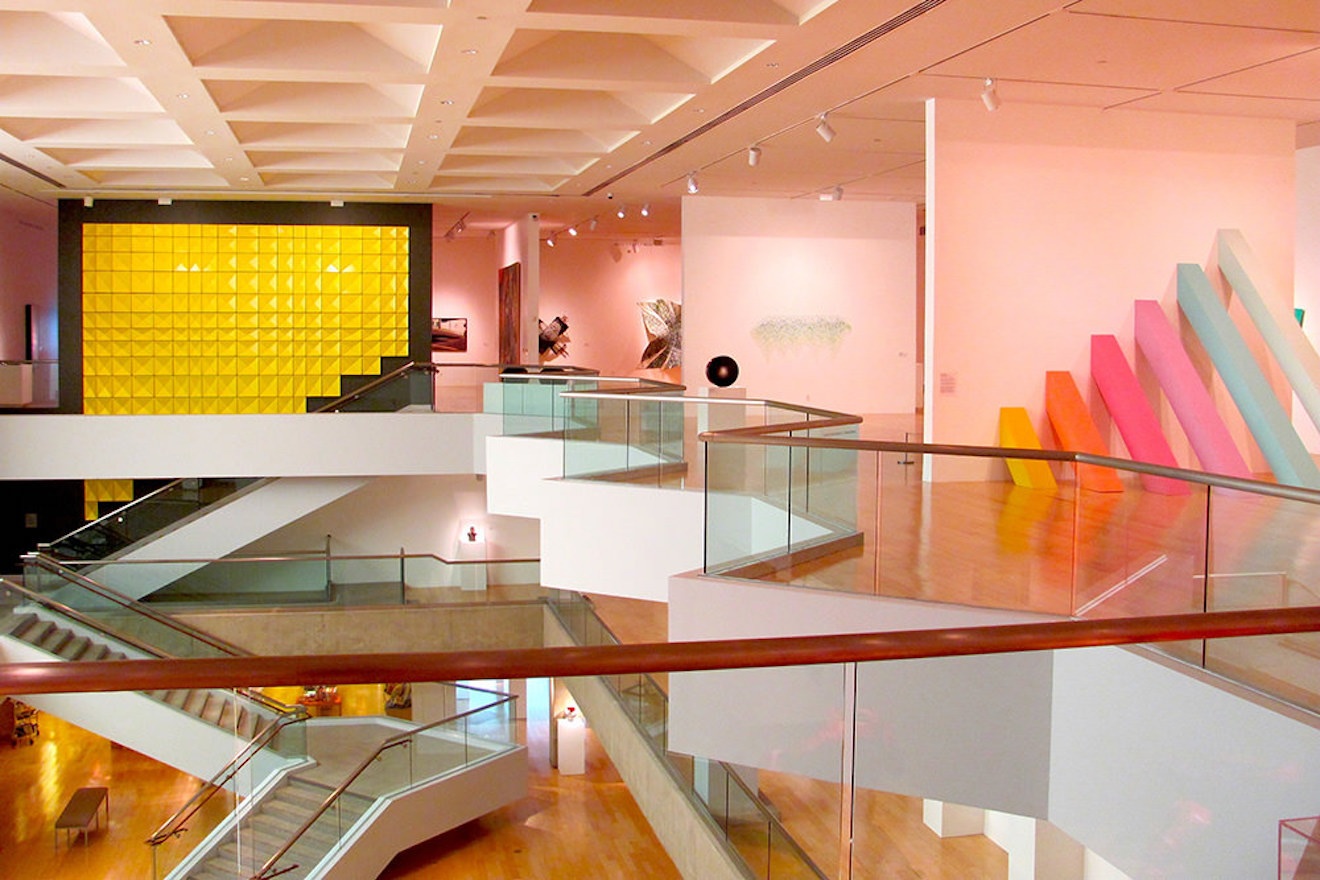