It’s early Wednesday evening in central Glasgow. The third floor of a block of flats. The student occupants have been cleared off to the local pub where they’re meeting reinforcements in preparation for tonight’s party. With his team watching and a video streaming crew setting up around him, Alan Fitzpatrick is soundchecking. It’s… loud. Behind him the single pane windows are rattling, as a newly-installed Void soundsystem – complete with giant subs – bounces the sound across to the opposite flats and even further down the road. Suddenly, in bursts a 50-something man, scruffy of beard and baggy of tracksuit bottom. ‘What on earth are you doing, pal?’, is a rough translation of the local vernacular angrily spat at Alan, the new arrival at pains to point out that he can’t even hear his TV so the music had better stop, or there’ll be trouble. Turning Prince’s ‘Controversy’ down for a milisecond, the towering 33-year-old Southampton-born DJ informs the man that he’d better go out then: it’s really not going to get any quieter. It will, though, all be over by the very reasonable time of half past nine. Welcome to We Are The Brave’s debut tour of (club volume) house parties.

When Mixmag last interviewed Fitzpatrick, in 2015, he was riding the crest of the ever growing techno tsunami, his long-standing symbiotic relationship with Drumcode elevating him to the world’s largest clubs and festival stages, from Junction 2 to Awakenings at ADE. There have been more hits since then, the pounding ‘Det Gown’ on Mosaic an exemplar of his route one DJ style (not to mention his love of a joke). The quantum leap, however, has been the launch of We Are The Brave, a brand encompassing not only a label and party but also a clothing range designed by Alan, art shows and more. Launched with the emphatically titled ‘We Do What We Want’, his own chunky slice of feel-good revivalist rave, Mixmag joins him for the label’s first tour, a string of solo consecutive house party dates in Glasgow, Newcastle and Liverpool, all live-streamed, followed by a sold-out label party in Manchester, in conjunction with Warehouse Project, and a We Are The Brave’s takeover of Room Two at Fabric. 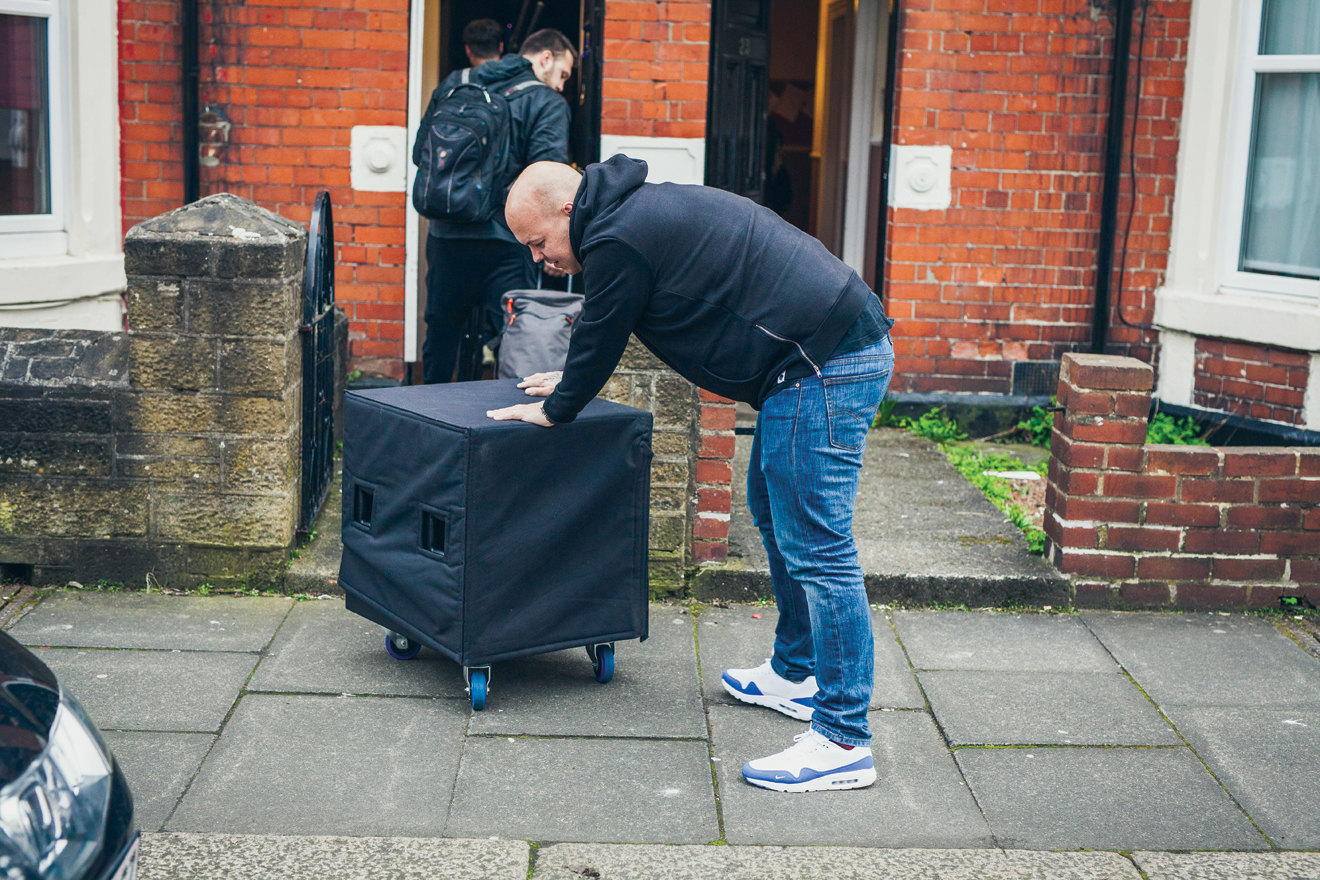 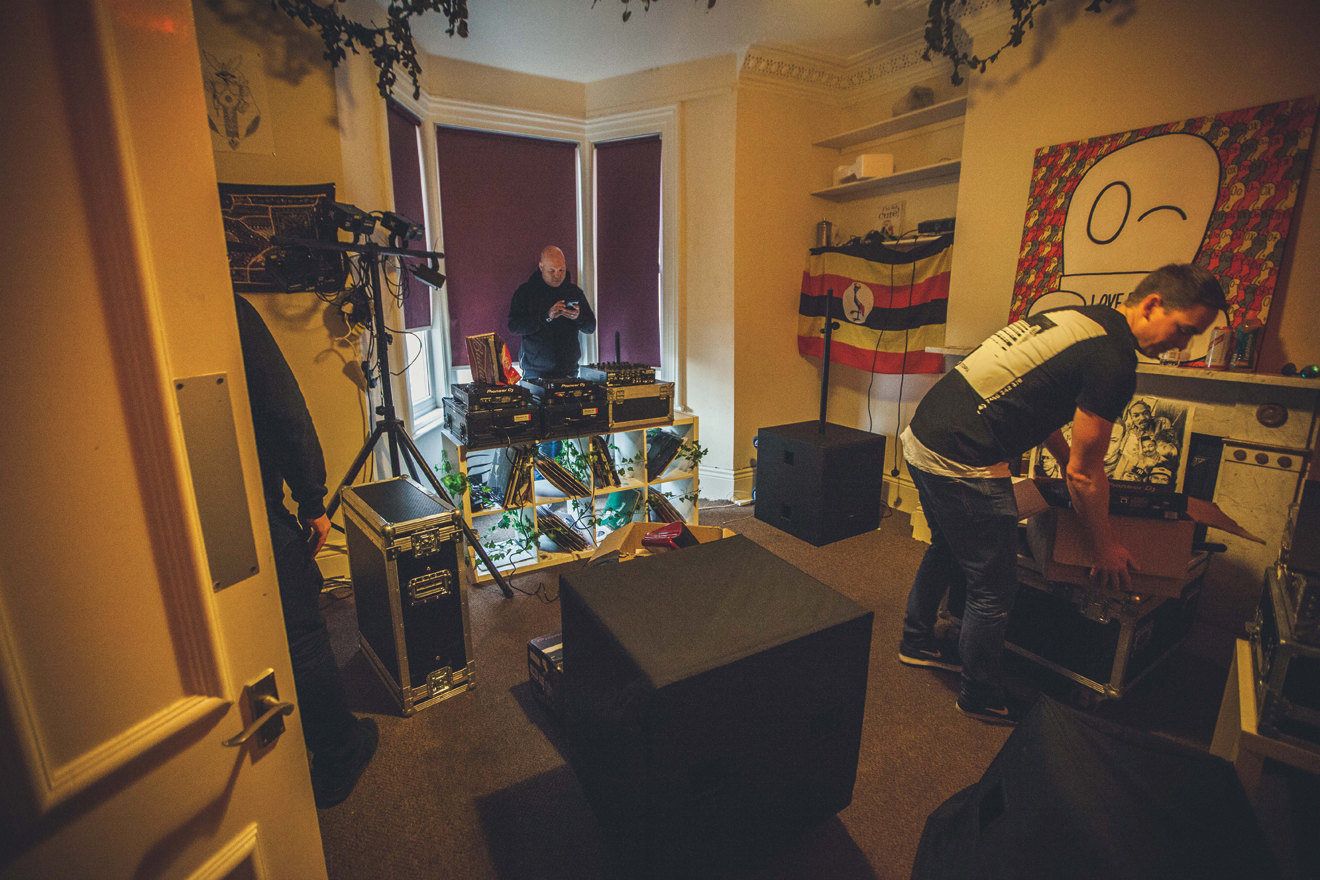 ‘We’re up for a bit of chaos,’ grins manager Rob Howarth on the tour’s second day in Newcastle. A quirk of the law means there’s nothing the authorities can do to stop a party before 10pm, so the main worry is the survival of the £100k or so soundsystem packed in the boot of the van that we’re travelling in for the next three days. Tonight’s stop is home to the city’s Bleep Collective, a trio of promoters who’ve previously hosted Alan at The World Headquarters. Despite starting the day with a flat battery, thanks to the van lights being left on, everything is running smoothly when we assemble at the hotel, Alan surfacing from his room in All Saints tracksuits bottoms, one of his own We Are The Brave hoodies and a pair of limited edition Nike Air Max – taken from his collection of around 60 pairs of trainers – that look spotlessly box-fresh.

Heading out of the wide roads of the city centre into narrower, terraced residential streets, there’s still a slight tension over what tonight could hold after the string of complaints in Glasgow culminated in a tweet that’s still causing amusement. “World’s most obnoxious DJ award goes to the one currently holding a rave two buildings down,” complained one neighbour in a proudly retweeted moan. “Fuck you Fitzpatrick.” 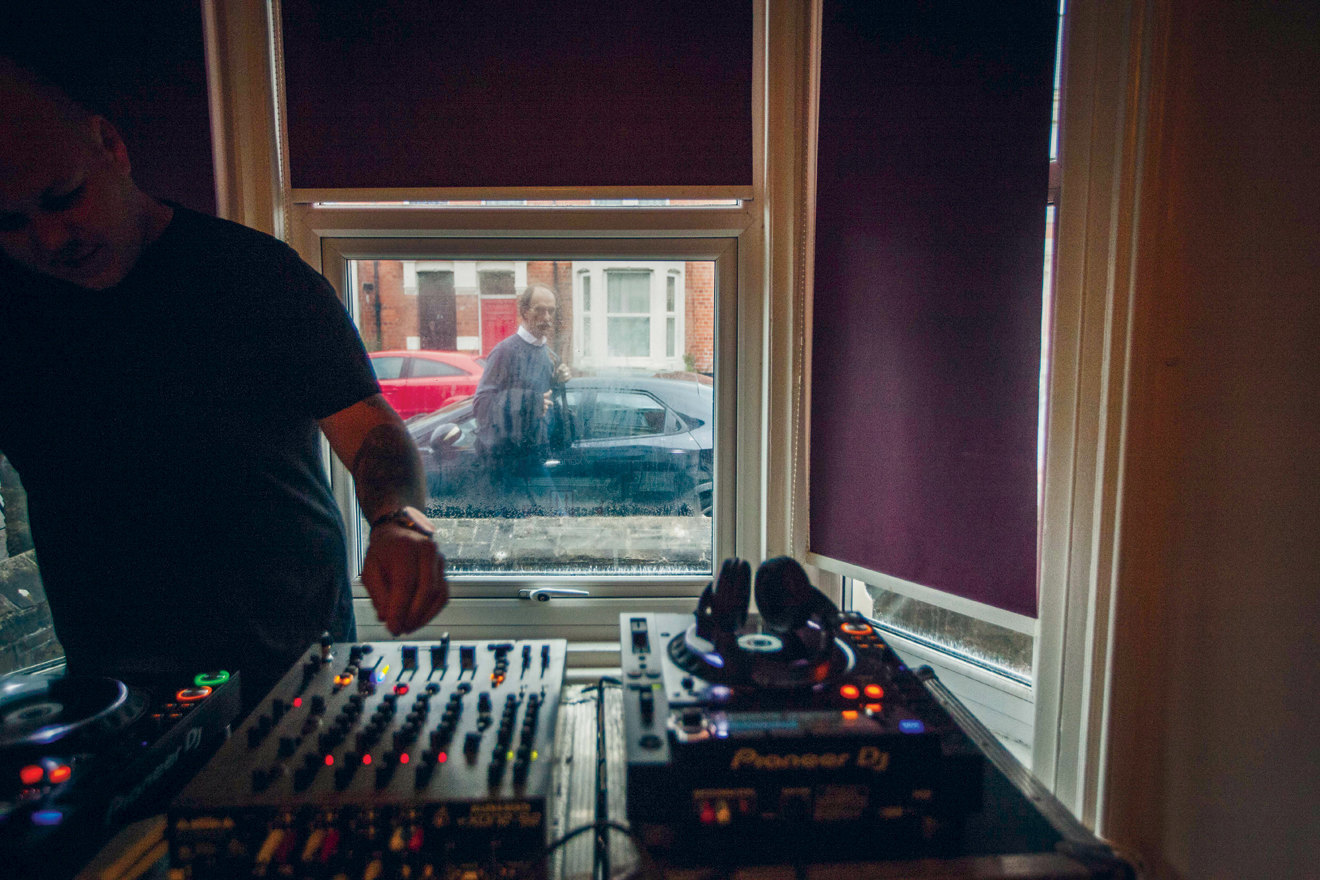 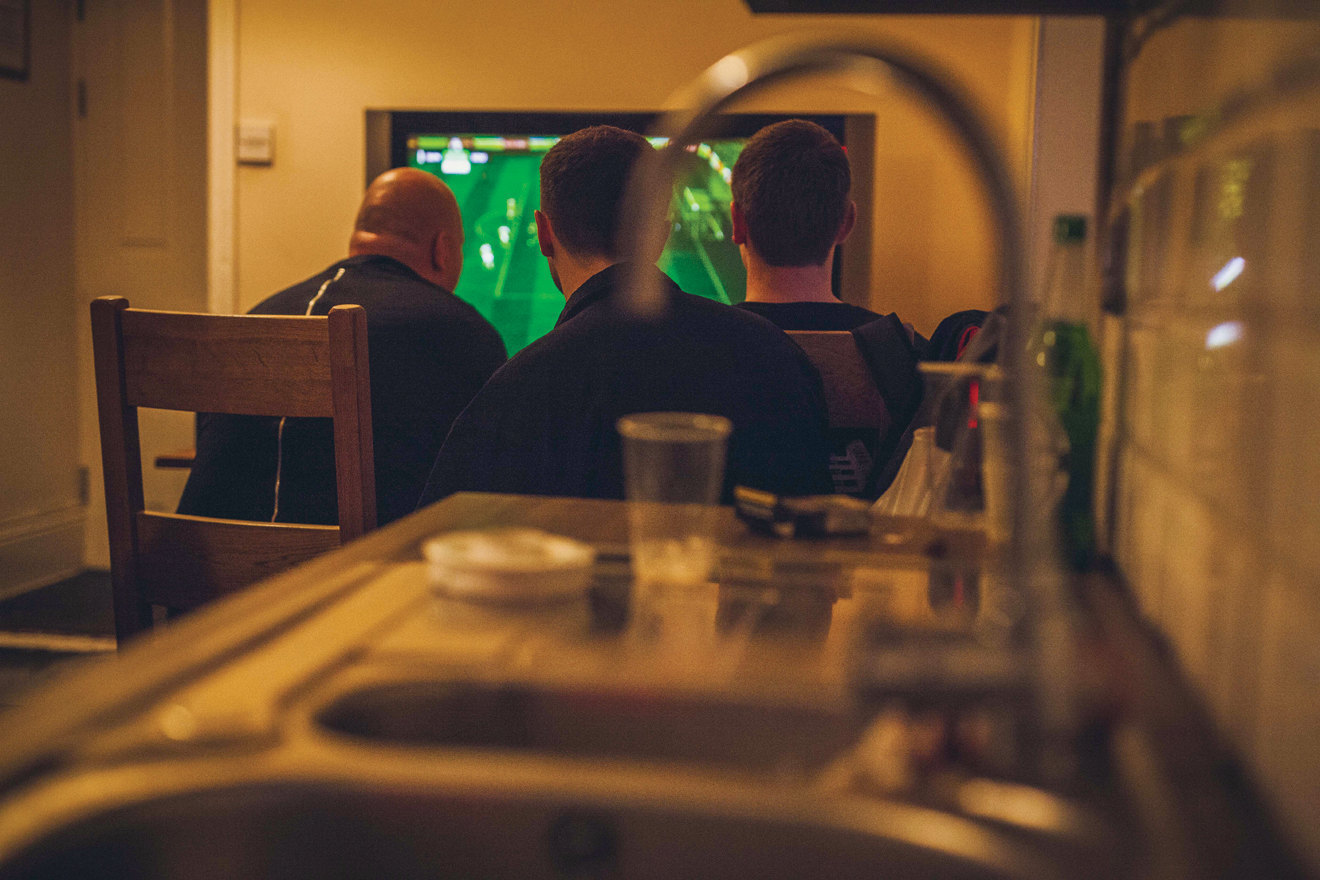 But as Calum, dressed in cap and pricey-looking streetwear, welcomes us into his home it’s soon clear that this is a different kettle of fish. For starters there’s double-glazing, and the neighbours – all students – are already mingling among the throng of natty twenty-somethings out back in the yard, where a bar has been built for the occasion and We Are The Brave’s lion logo spray-painted on the wall. A bouncer guards the back gate, which heads out into a long back alley of dustbins, while in the front room 3D visuals are being mapped onto a wall. There’s even a ‘room two’ upstairs, the sound of Danny Boy’s ultra rare ‘Discomix’ carrying down the to the hallway. But beyond this professionalism the place has the lived-in (then lived-in for another few terms) rough edges of a student flat, the cramped bathroom filled with empty shampoo bottles, a clothes tag discarded on the floor.

Having declared on Twitter that “every house we are doing a party in this month must have a PS4 with FIFA 17”, Alan wisely hangs up his virtual boots after losing three games in a row in the packed kitchen. It does nothing to dampen his verve behind the decks, though. As a surge of bodies pins us against the far wall he starts at full pace, a collective cheer welcoming the penetrating synths of Johannes Heil’s catchily titled ‘EXILE 007 B2’ . As temperatures rise the numbers thin a little, people escaping to the garden to smoke, but the mid-set appearance of ‘We Do What We Want’ sparks the now traditional ‘duh-duh-duh, duh-duh-duh-duh’, bassline sing-along.

When the cameras stop after the official two hours the atmosphere switches, diving further into Alan’s roots. A parade of classics including Bizarre Inc’s ‘Playing With Knives’, Awesome Three’s ‘Don’t Go’ and Felix’s ‘Don’t You Want Me’ are all topped by a hardcore version of Paul Van Dyk’s ‘For An Angel’ which drops into Energy 52’s ‘Cafe Del Mar’ at the eleventh hour. It’s barely actually past eleven when we’re packed up and out the front door, the party still raging as we head for the wind-down. 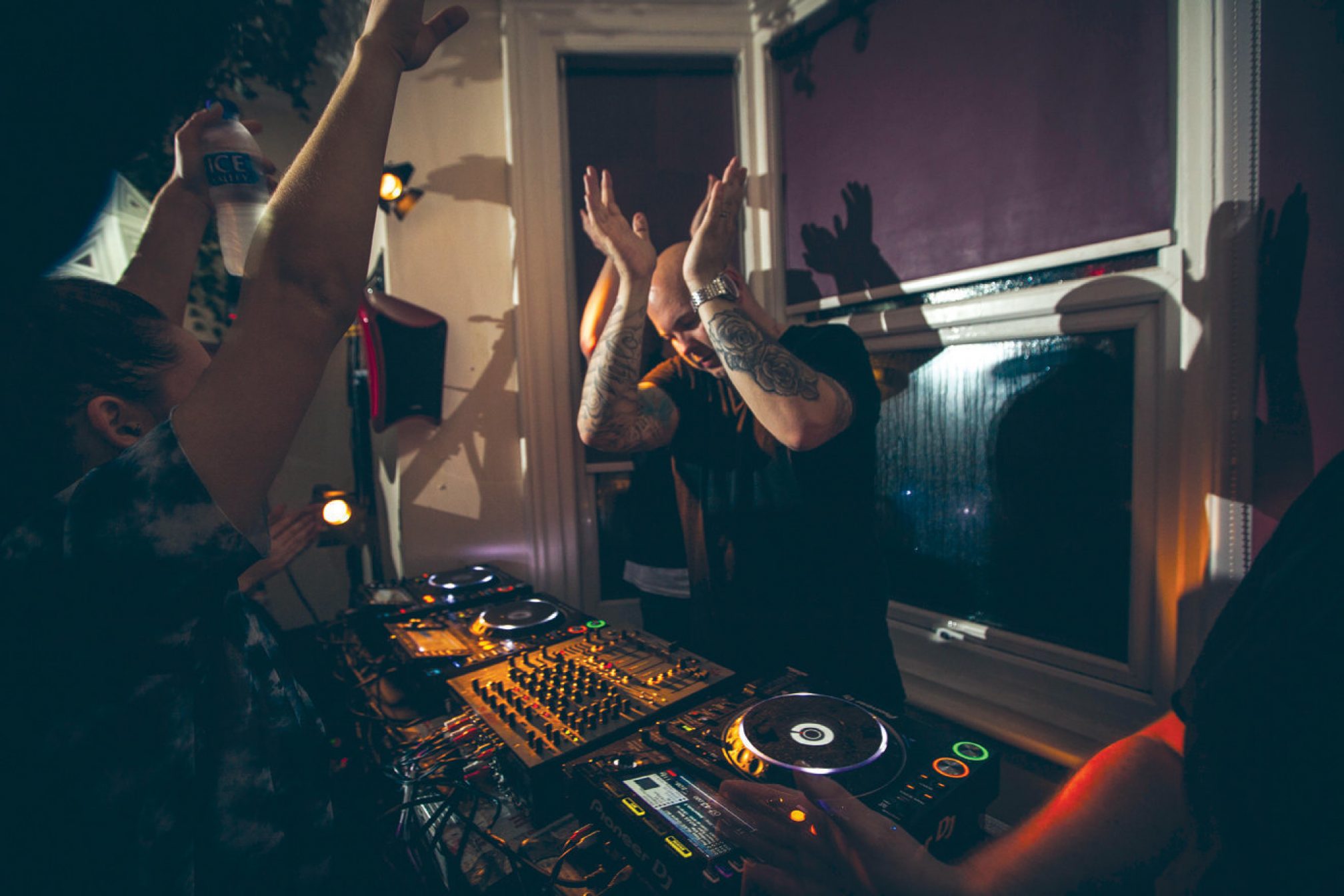 “I’m living off cooked breakfasts,” says Alan in his distinctive South coast accent, post-hotel grub, when we board the bus at midday. Cranking out classic pop in the van – Hall & Oates, Luther Vandross, Fleetwood Mac – he’s in playful mood. “I’m playing this next time I’m at Berghain. Imagine that mid-set!” he hollers over the German version of Nena’s ‘99 Red Balloons’, before spotting a sign for services. “M&S and Greggs, could life get any better?”

Munching on a Greggs katsu pasty moments later (review: “It taste like coronation chicken with burnt coconut on top”) while surrounded by parked articulated lorries, he’s bubbling with enthusiasm about getting so close to a new wave of younger fans and the chance the tour gives him to stretch beyond his normal range, assuring us that he’ll be doing it again despite the logistical hassles involved. “If I had more time, I’d probably even play 80s stuff. You want it to be a bit of fun – you can see it in the last hour when everyone is singing along.” There’s even talk of doing outdoor events, like back in the day. “I remember going to raves under the arches of the bridges in Southampton. You’d crawl through a hole with a torch as there’d be no lights at all.”

“We Are The Brave lets me put all my efforts under one banner without it getting too confusing,” he goes on, cracking into an M&S lager. He explains how his desire to design clothes started with doodles before he helped design some 998s for New Balance in the US. “Then I’ve got artist friends like Dave White, who’s a massive collaborator with Nike,” he says of the man who designed the limited edition Air Max 95s and painted his ‘Gorilla II’ print, one of which Alan owns, while listening to Alan’s ‘Fabric 87’ mix.

“In the same way that Richard Branson has Virgin this and Virgin that, why not have different strings to your bow? The name is about having the bottle to do it and not really giving a fuck.” Having played there with Drumcode, London’s Tobacco Docks, he says, is a venue where you could have a club, an art show and a space for selling merchandise. 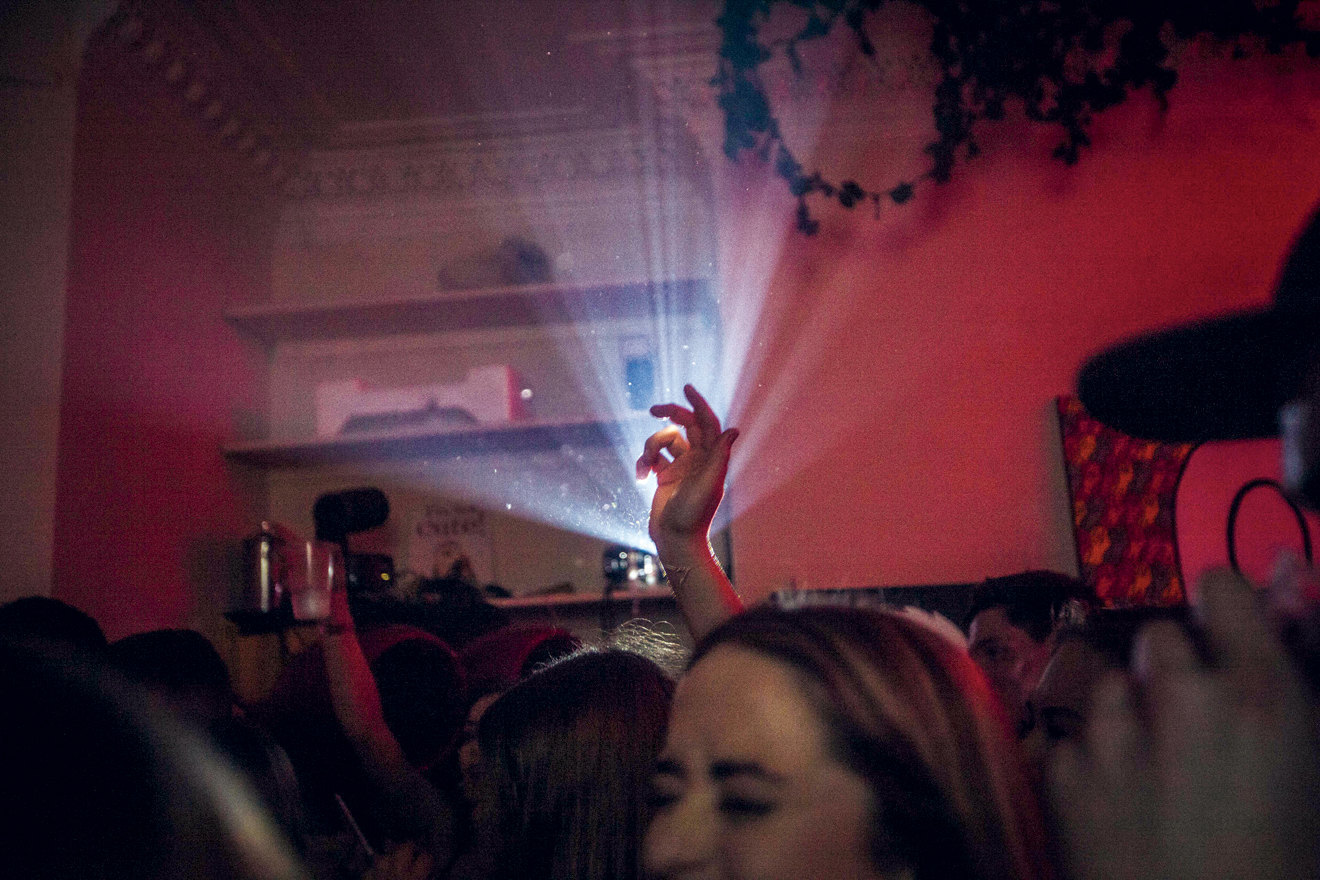 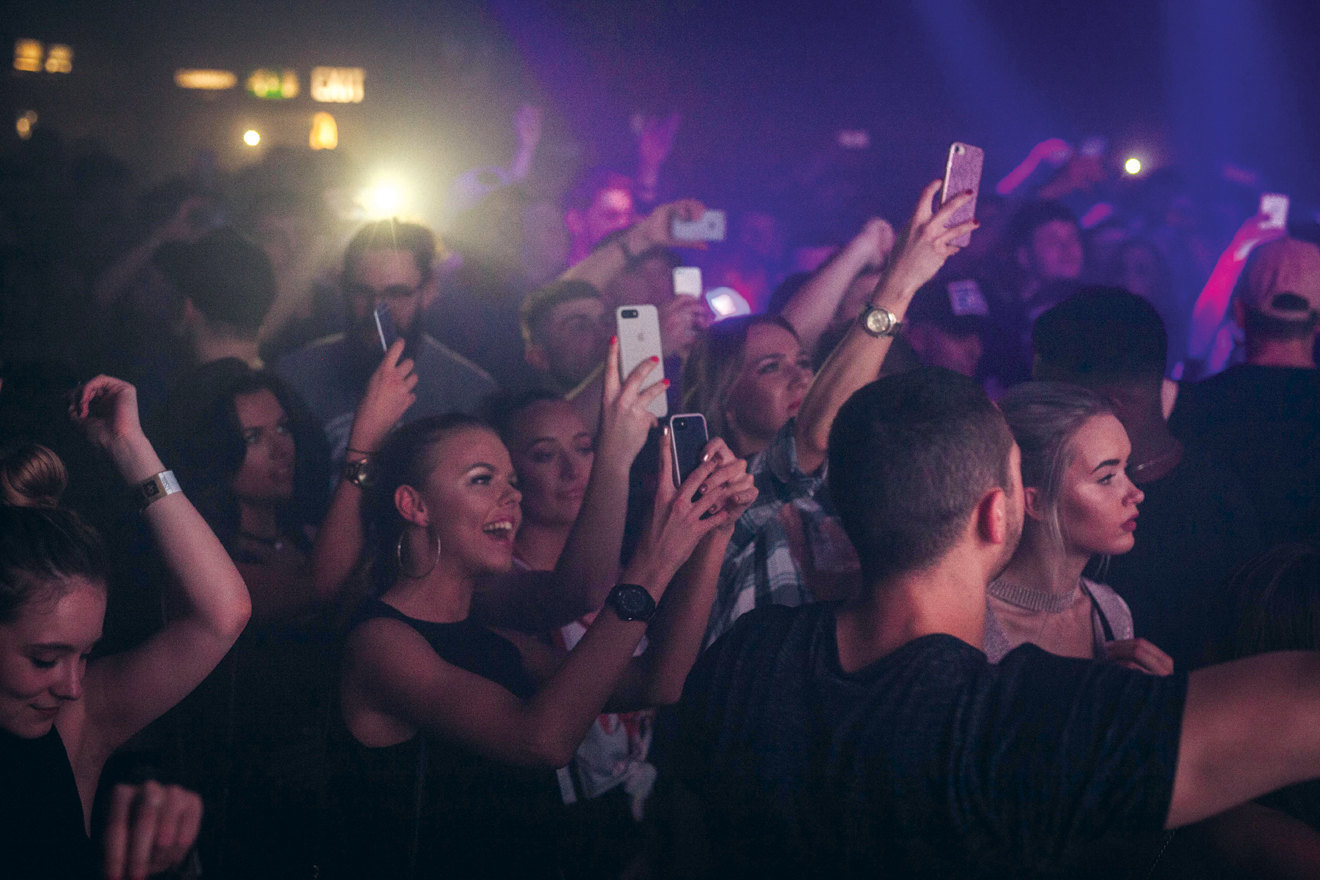 A regular afterparty spot thanks to its tall ceilings and rooftop smoking area, we’ve been promised there’s a lift up to tonight’s flat, which is on the top floor of a building also containing a beauty salon and yoga studio. As soon as it gets a taste of the Void sub, though, the lift bids us a feeble good night, prompting a call for everyone to pitch in with some muscle power. There are nervous moments wondering if the system will actually fit in the flat, but once its installed we’re soon off. Just past 7pm it’s still light outside behind the flapping black bin bags blocking the window,s making for a slower start, a young audience drowning their shyness in beers from a fridge by the decks. But it’s ramped up by Alan’s latest tracks from his ‘Brian’s Proper Done One’ EP, out at the end of April on Drumcode. With its looped sample of hardcore MC Ribz, vinyl reverses and incessant bleeps, ‘Wait A Second’ squeezes Special Request and LFO through the techno juicer, while ‘Trance Init’ breaks down into a huge turn-of-the-millennium ’Crasher riff. Built for big rooms, they sound even bigger in these cramped confines, dancers scaling a ledge over the fridge to create their own podium. As the stream team pack down to catch their train home the party reaches its peak, Alan throwing diva shapes behind the decks as Deep Dish’s ‘Hideaway’ joins Armand Van Helden’s ‘You Don’t Even Know Me’.

It makes for boozy ride to Manchester, racing against time to set up Guerilla Shout’s visual show which will accompany tonight’s label showcase at Gorilla. Conversation ranges from the shop Choccywoccydoodah (Alan’s wife, with whom he has two kids, is a cake designer) to being at home fiddling with his motocross bikes. “I knew that would be my most commercial track,” he says when we get to the success of ‘We Do What We Want’, written in May 2016 in a studio which was then at the end of his garden. Written as a big summer track, when he played it at Junction 2 it still didn’t have a name. It blew up, and a year on it’s still the anthem it was designed it to be. “Then you end up getting sick of it. I’m totally sick of it now. Everyone wants to hear it!”

Sharing Alan’s deep, scene-shifting background, We Are The Brave’s current roster kick the party off in the no-frills rave cave that is Gorilla. Twisting the classic sci-fi jungle strains of Jo’s ‘R-Type’ into futuristic techno, Boxia nods to his own rave roots to show why he already also been embraced by Drumcode. Vertical Drop (Paul Maddox, one half of Spektre) heads even further into euphoria, his live show combining soaring piano, breakbeats and the occasional foray into acidic four-four. With the heroic Mancunian appetite for a session on display, it’s still a full house when Alan takes over, half the party from Liverpool among the sea of faces as he turns it out once again. 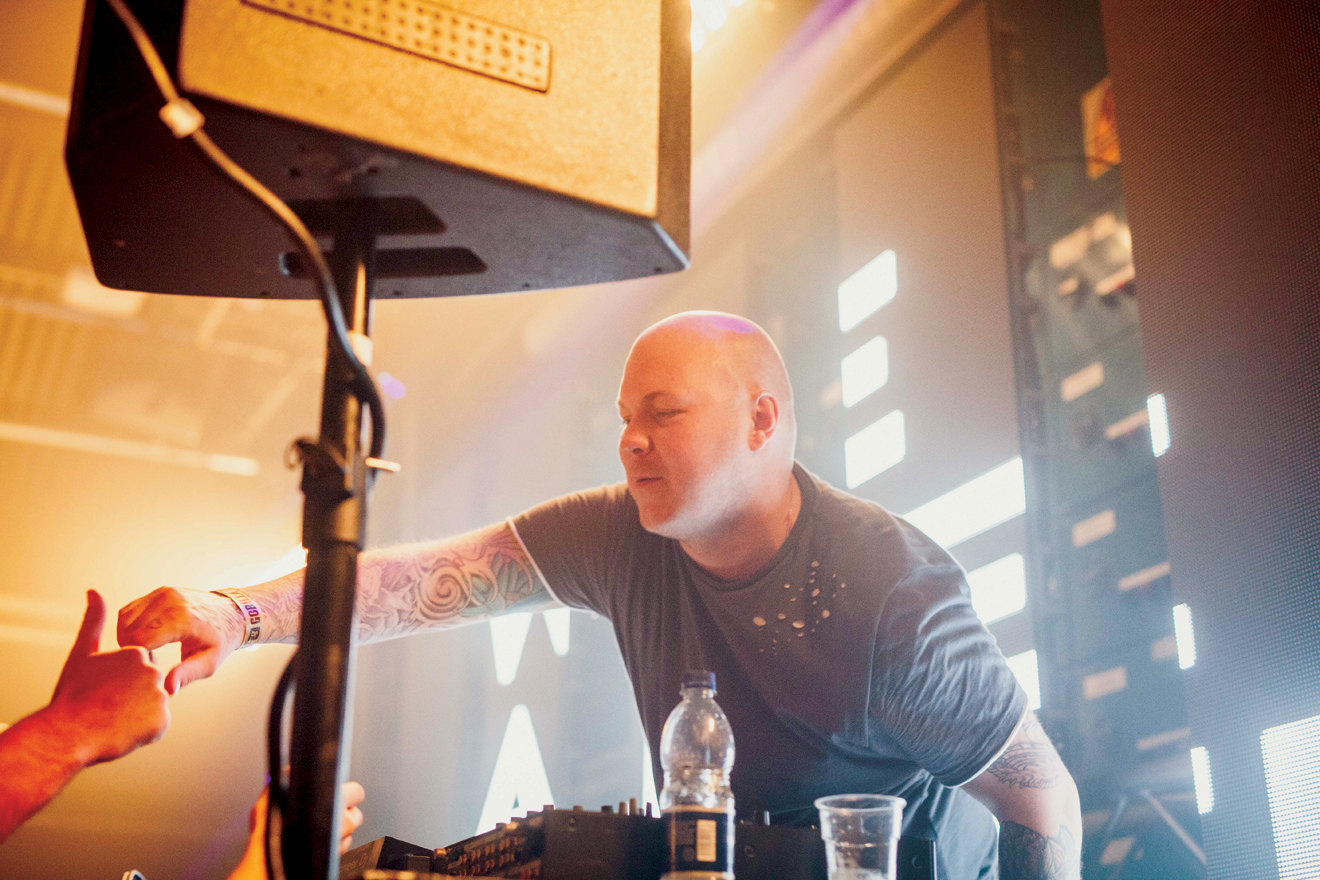 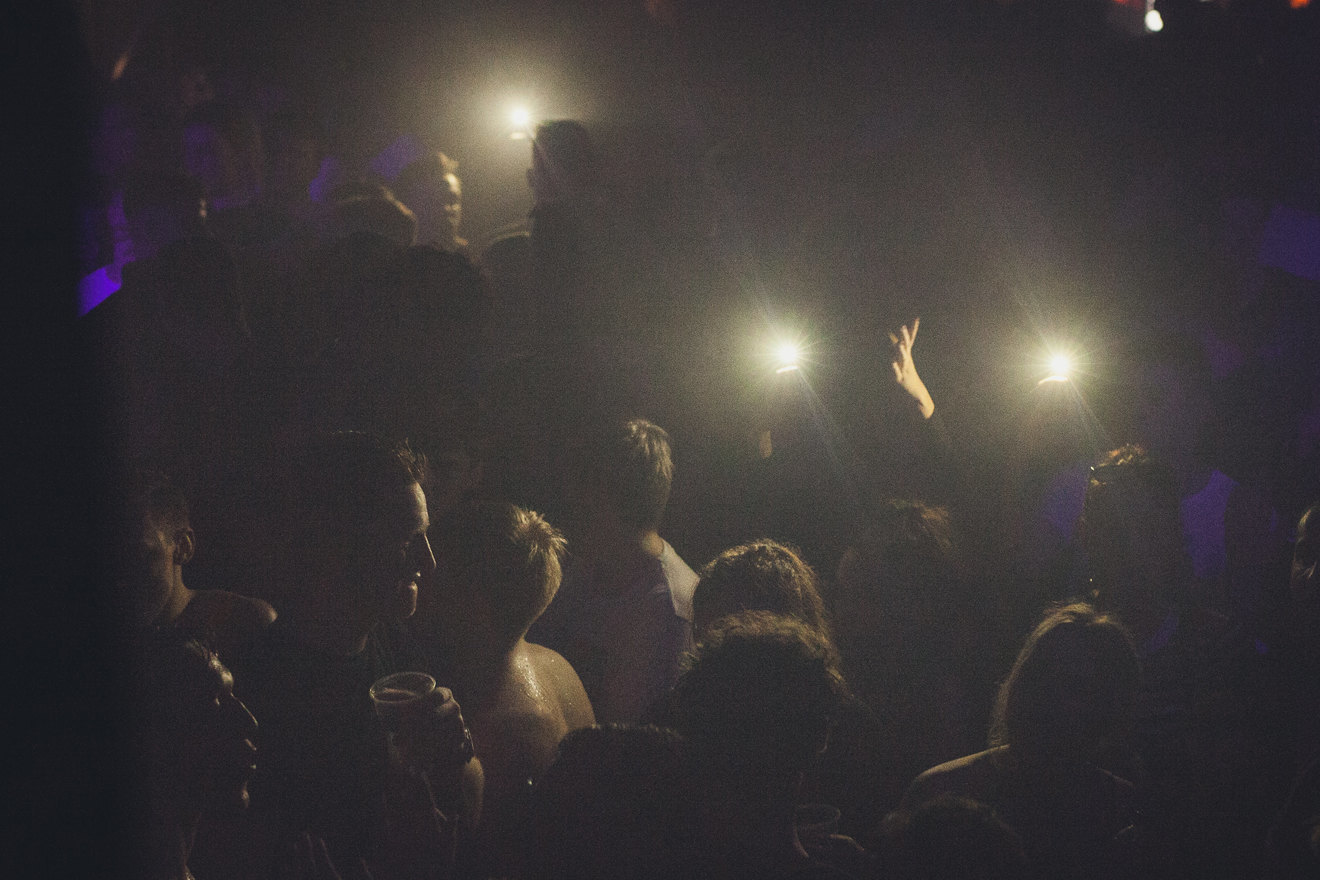 It’s a subdued ride back to London. Mixmag has snatched a few hours’ sleep, but Alan is part of the ‘straight through crew’. Later that night at Fabric he still hasn’t slept, yet he seems as fresh as he was at the beginning of this mini-tour. Following storming sets from Boxia and Vertical Drop, Alan comes on to mass chanting. Somehow everything he plays sounds harder, faster and more infused with energy than it would in the hands of any other DJ. Fists pump to his ‘Love Siren’, its “I’m in love...” refrain from N-Joi’s ‘Anthem’ dropping into a pulse of bass. He dabs to the crowd, those same trainers still sparkling and box fresh. Somehow, like Alan Fitzpatrick himself, nothing is able to touch them. 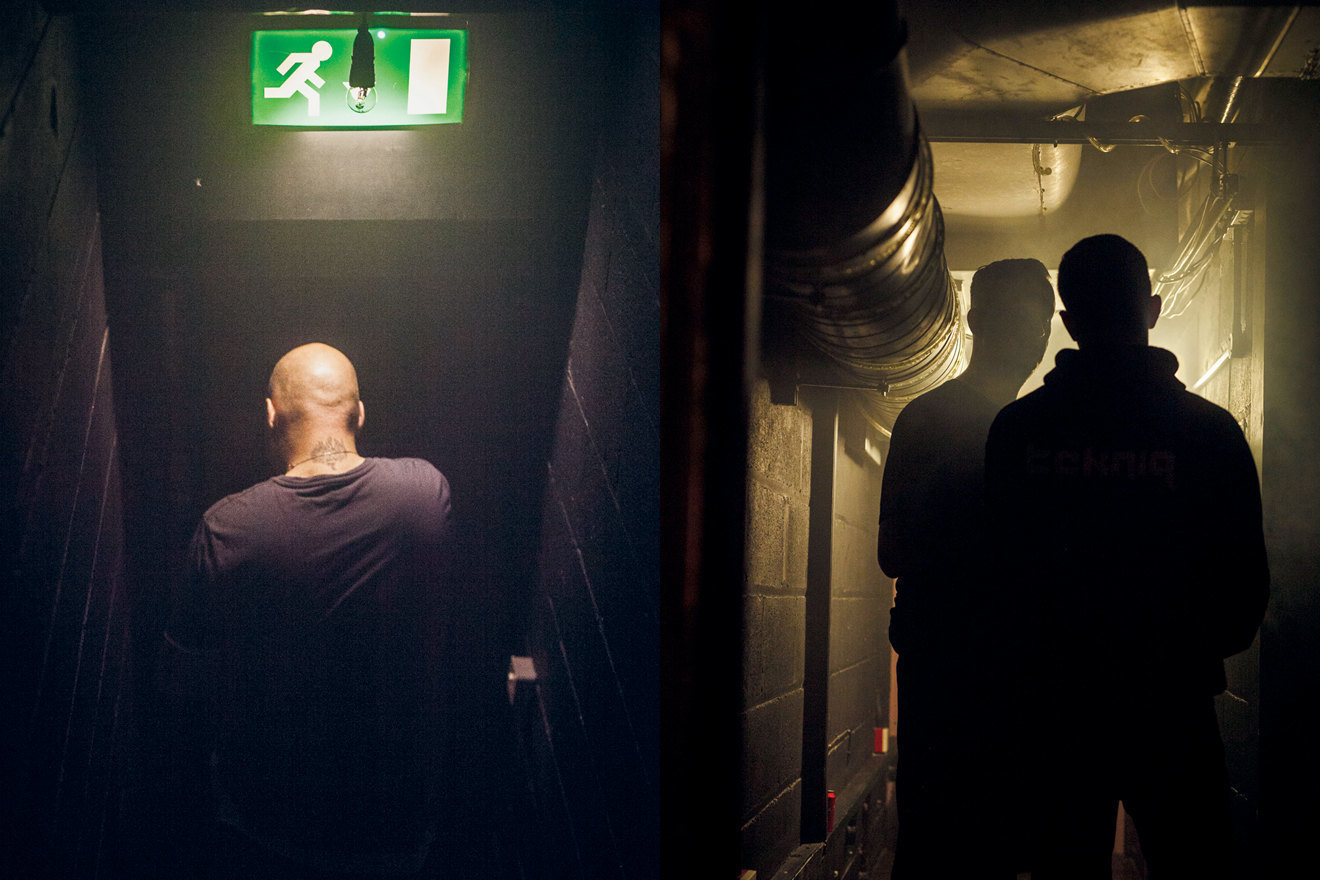