PEGGYFUCKINGGOU. It’s an inescapable phrase at Printworks for Gou Talk, a showcase by the Korean-born, Berlin-based DJ whose name has cut through the noise of new artists like no other. Tonight it’s not chanted football-style, as the phrase ‘Peggy Shoe’ has been at gigs this year, fans holding their footwear aloft in approval. Instead it’s emblazoned across T-shirts on sale at Printworks’ entrance, an acid house smiley featuring Gou’s expletive-filled name as its grin.

Gou has plenty to be happy about. She only released her first EP in 2016 yet tonight is closing out this giant 6000-capacity South London venue. It’s a phenomenal feat and one that has captured imaginations. When we arrive around 4pm the club’s extensive queuing lanes are all heaving with youthful-faced groups buzzing with excitement. Detroit’s Derrick May, aka techno’s The Innovator, has already played one of the very earliest sets in the main room, indicating the strength of Gou in terms of booking other celebrated artists.

Read this next: The Cover Mix - Peggy Gou

Part of tonight is about showcasing her wide-ranging musical tastes. Ed DMX was on Gou’s ‘DJ-Kicks’ mix, which came out this summer, under his DMX Krew alias and also provided the second release on her Gudu label. So it’s little surprise he’s playing Printworks’ cavernous main room tonight, balconies on either side drawing your eyes up to the distant ceiling. Behind a glowing neon Gou Talk sign Ed unleashes obscure acid house, the infectious and intimately familiar bassline of ‘Energy Flash’ making us hope Joey Beltram gets PRS payments. Behind, three stories high, giant green blocks rotate forming ever-shifting towers, later transforming into the outlines of intertwined dancers. 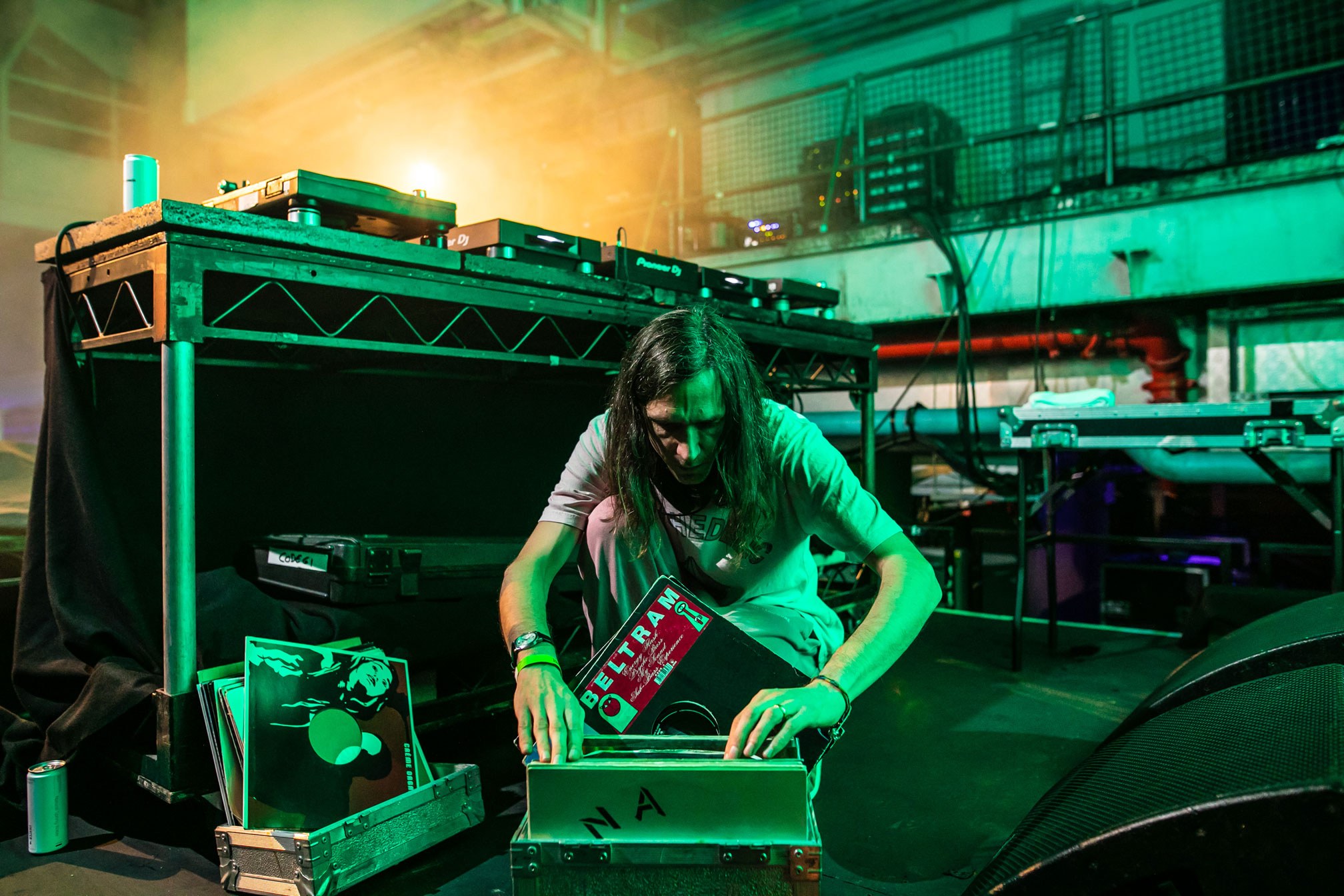 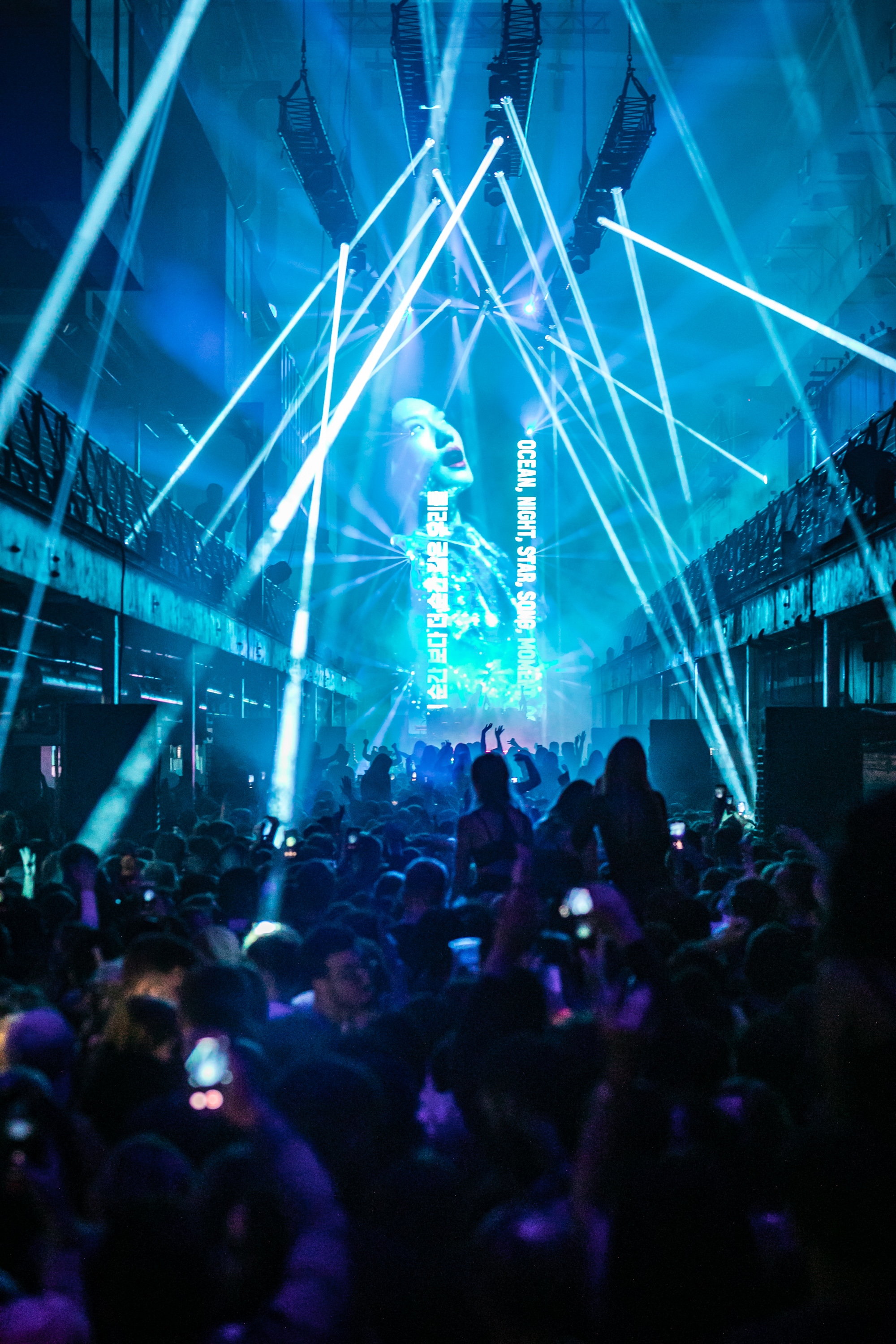 Printwork’s smaller Dark Room, contrary to the connotations of its name, is neither a room for anonymous sex nor particularly dark, thanks to a wide entrance flooding in light. It is, however, where Gou has booked some of tonight’s more underground acts. Dutch DJ Deniro’s loopy techno would be ideal in the industrial surroundings of the main room but in a half-full room that holds a hundred people feels like overkill. Suzanne Kraft’s Optimo-esque stylings are better suited on paper but Solar’s ‘5 Seconds’ with it’s MC5 samples proves too dark and weird for tonight’s crowd, which is unfortunate.

HAAi is another DJ who has had a huge year, following winning 2018’s Essential Mix of the Year, and she’s taking care of business back under Printworks peerless main room lighting rig. Huge kicks boom out of the speakers that line the pillars of the venue’s long, hall-like space, rattling percussion breaking into fractured metallic sounds as she makes ample use of the mixer’s effects. A remix of Leftfield’s ‘Open Up’ brings in a rare vocal, John Lydon’s voice pleadingly apt as bodies push and squeeze through the mass on the dancefloor.

A breakbeat techno track, its acerbic hoover bass accompanied by a vocal declaring "Coming on strong with some hardcore power", sends the lights spinning into a white vortex that sucks in all attention like a collapsing star. Suddenly it feels like 4am, although it’s only tea time. HAAi strips the music down with rattling hard drum percussion, the now UK sound descended from the early Dutch house of producers like Nicky Romero. At the very back of the room a giant sun-like light suddenly switches on, burning its way through the darkness. Unrelenting until her last track, HAAi signs off with a wave that’s met with a ripple of cheers. 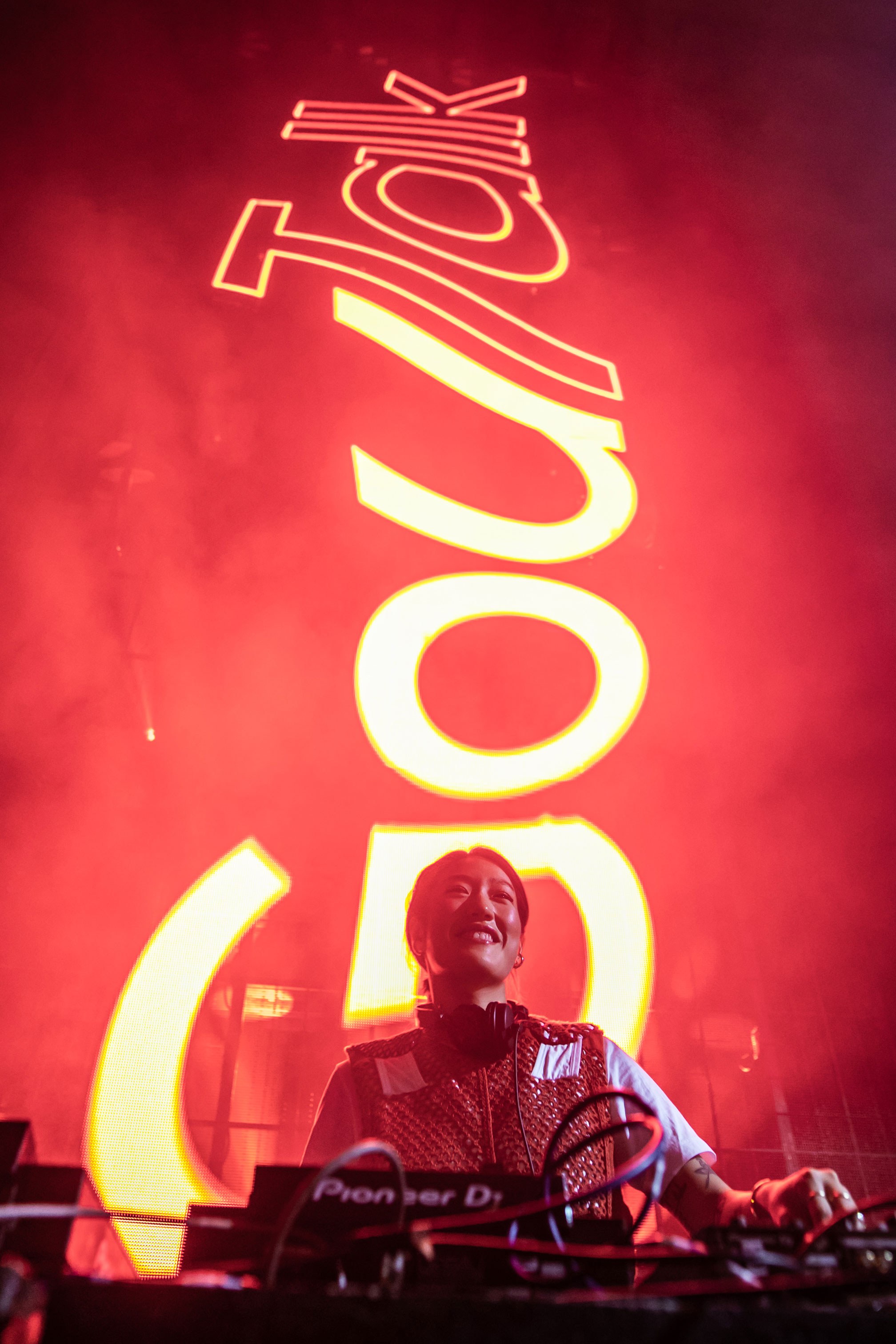 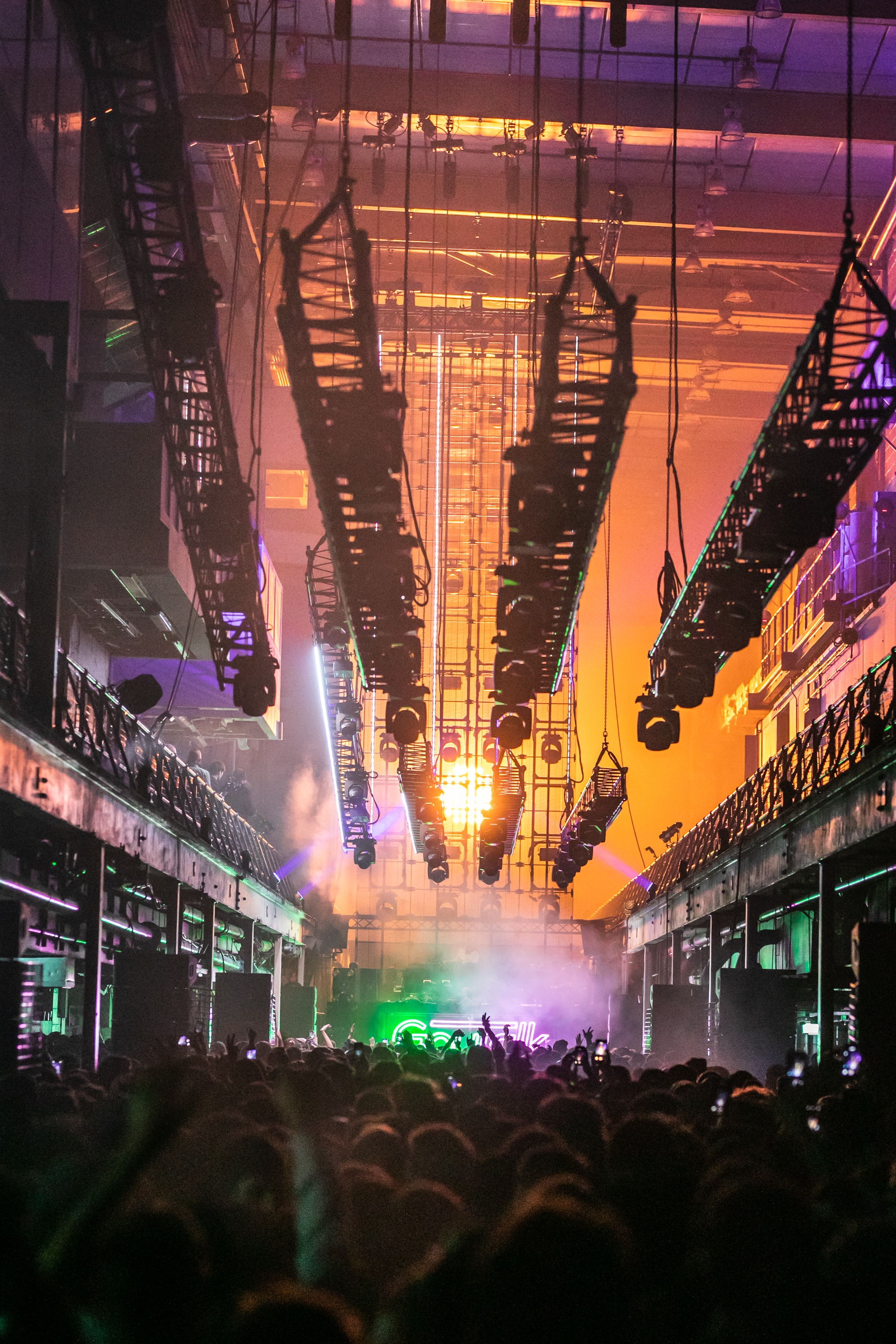 Slightly frazzled by these shock and awe dynamics, the start of Detroit duo Octave One’s live show inevitably feels like a drop in energy, and possibly volume, many taking the opportunity to hit the bar before the main draw.

Axel Boman, Swedish co-founder of Studio Barnhus, once recalled advice he’d gotten from DJ Koze: the bigger the stage, the less the music should do. It’s an ethos Gou seems to have adopted tonight. While her own productions delve into disco and deep house, she sets off with tracky techno cum tech-house, looping grooves mixed seamlessly into one another. But there are nods to current trends. One track fires out giant 90s-style trance rifts. Another shifts the groove from straight four four to a bouncing breakbeat. Looking down on the crowd, Gou waves to friends and fans, every bit at ease in her elevated position.

It’s another of the self-assured performances that’s taken her from the UAE to the USA, winning an international army of fans and making her one of the most recognisable brands in modern electronic music. All the while behind her a smiley face bounces up and down on the towering screens, its face grinning PEGGYFUCKINGGOU. 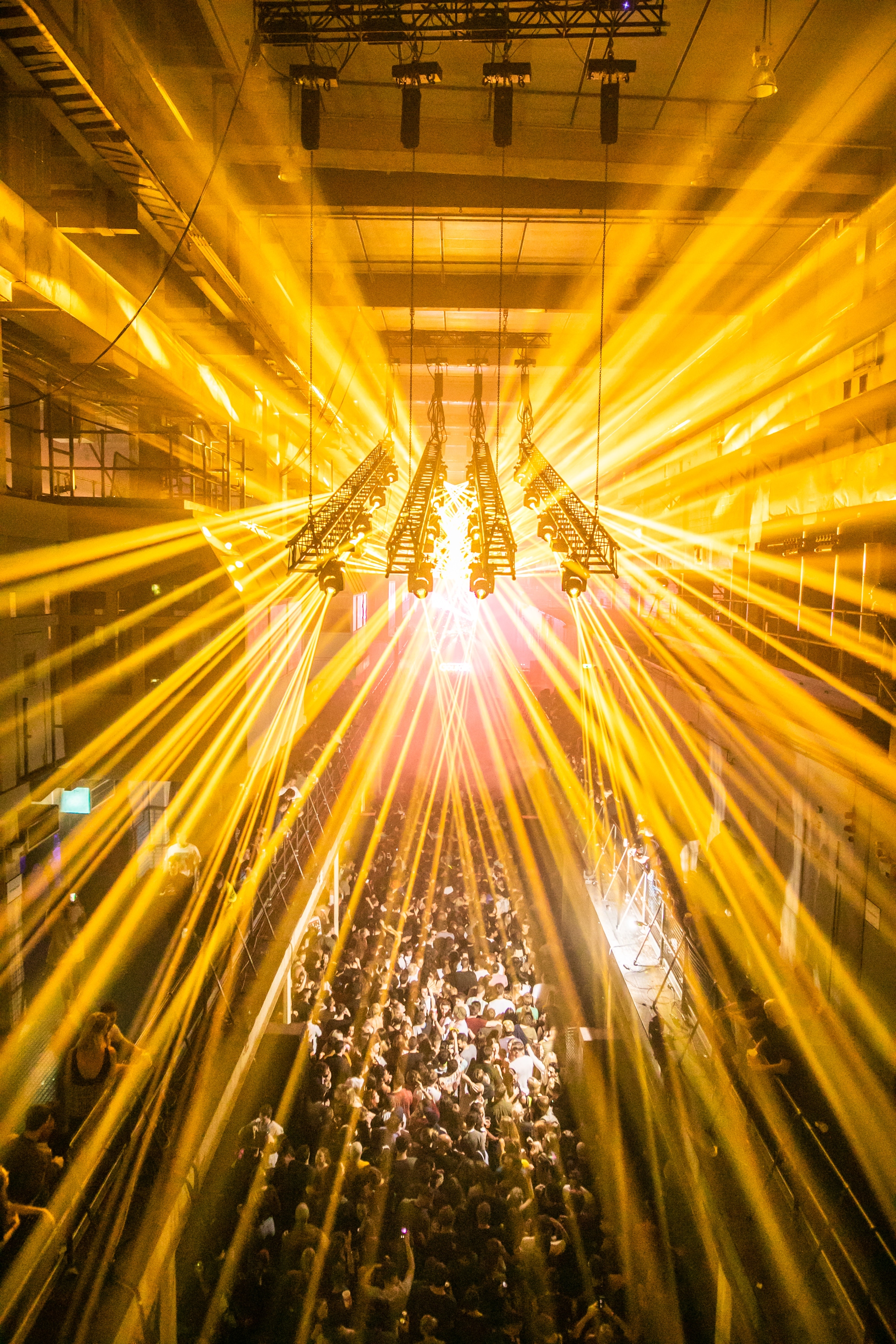