First appearing on our radar two years ago with the woozy and instantly likeable 'All Inside' and sprightly 'Just Us', it's no surprise they've reached the world tour status they've been enjoying this year. The Lancaster boys - George Townsend and Adam Kaye - have spearheaded a contemporary house sound alongside the likes of Disclosure, firing out an alarming amount of dancefloor movers or straight up chillers, with 'Gold', Baby I Got That', 'Wet Summer' and latest single 'All I See' among the crisp and swinging tracks responsible for their rocketing success. Then there's remixes of Chromeo, Duke Dumont and Rudimental and a jam-filled set in the corner of our office.

Don't think their ascent's just a SoundCloud-induced flash-in-the-pan, though. They've been developing their live show since last year and the last 12 months have seen them playing around Europe and the United States, hitting the shores of Croatia, Ibiza and Australia and they're currently taking their Bondax & Friends tour around the UK alongside the likes of Karma Kid, TCTS and Star Slinger. With the long-awaited debut album from the pair still in the works, they're filling the void with 'Bondax & Friends: The Mix Album' - out November 24 - featuring a host of artists they're backing such as Stwo, Esta and Bodhi.

Before that's released, the two took the time to speak to us about their idea behind the compilation, dispelling the notion of them being 'internet producers' and leaving education behind to focus on music.

Exclusive premiere of 'Something Good' below 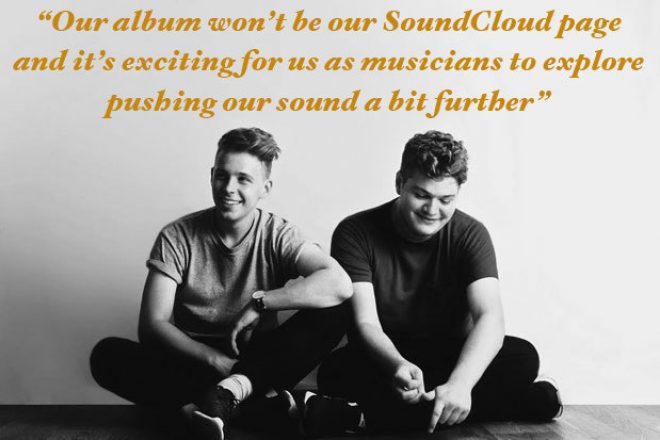 You've got the 'Bondax & Friends' compilation coming out. Tell us your idea behind it.

George: It was an opportunity to put out the music we've been making over the last year or so that just hasn't seen the light of day. The album's not ready yet and we had loads of tunes our mates were giving us that we wanted to put out. We haven't been able to do stuff with our label [Justus] recently so the compilation was the perfect way to combine our own music and theirs to make something interesting. We feel like we've developed

our sound a bit, but no one's really heard it to a full extent. Hopefully the compilation gives us an opportunity to show it off.

What's been going on with the label?

Adam: It's been difficult recently because we've had to concentrate on our own music. We've been scouting new artists but anything new probably won't come out until next year. We just want to get artists bigger as we did with Karma Kid. The nice thing about the scene we're in is that we always play each other's tunes out and support the music we believe in.

You mentioned Karma Kid and you've got close ties with TCTS as well. Is it important for you to keep those circles tight knit?

G: Sure, but it's not actually difficult because we're best mates with them! Even if we didn't put Karma Kid on the compilation there wouldn't be any hard feelings. It worked out nicely that everything fell into the right place at the right time. It got a bit complicated in choosing what ones were going to work, but it ended up being exactly how we wanted it.

Tell us about your plans for an album.

A: We've been working on it for a very long time and we've got so much music. But we need to finish a lot of tunes which is hard to do when you're touring. That's what the compilation is about: to release a couple of new tunes and a single ['All I See'] before the album.

G: I think everything will fall into the place over the next year. We've got a lot of tunes we're happy with, so it's just a case of getting them together in one coherent piece of music. It's been difficult for us because we've been finding ourselves in terms of musical direction and trying to tour. But I think we've just about balanced that out now.

Your new single 'All I See' is on quite a summery vibe. Will that be the direction the album takes?

A: We do tend to make quite happy music but it's not all going to be like that. We want to make sure we don't keep ourselves to one sound and try out different things while still sounding like us. There's definitely a couple of different sounds we've explored on the album.

G: I think you'll find the album won't actually sound like Bondax. 'All I See' is quite reminiscent of the work we've done so far which is why we're quite excited to get this compilation album out. We've made some real r'n'b stuff with some more moody stuff. The album won't be our SoundCloud page and it's exciting for us as musicians to explore pushing our sound a bit further. Hopefully our fans and people who haven't heard our music will like that sound we're exploring.

Is your live show integral in showing that you're not just 'internet producers'?

A: Definitely. A lot of the musicians we look up to, like Bonobo and Mount Kimbie, they all have live shows. We wanted to explore our music through a different medium. Obviously we love DJing because we grew up DJing, but we can't play out the chilled stuff we make because everyone wants to party. The live show's just a way to show our music in a different light and play the sounds you don't hear in a DJ set.

G: It's a nice opportunity to show our music has the capability to be different from a dancefloor hit. For example, when we saw Washed Out live last year I closed my eyes when my favourite tune came on and started to see waterfalls. It's such an odd, obvious thing but I've never had that kind of moment seeing a DJ set. Those moments of nostalgia will make a live set that bit more special and we're trying to create moments like that.

Around a year-a-half ago you could say you were regarded to be in the same bracket as Disclosure. Did you feel any pressure when they blew up?

G: Not really because they were always miles ahead of us. When we first met them we were like: "Fuck, we've met Disclosure. This is crazy." We hadn't played a single gig at that point and they were supporting SBTRKT on tour. I'm not saying Disclosure are trying to make hits, but we're not. Obviously they're doing something that hasn't been done before but in the end they're re-doing house music. If you listen to our music, at no point have we regurgitated something. We've taken inspiration from loads of types of music but we just happened to be a young duo making this kind of sound.

A: We love them, though! We've been friends with them for a long time and it's great to see them doing so well. They deserve everything they've got. When I heard 'Tenderly' from a random car in London I knew they were going to get big.

You obviously started really young. How did your parents take it when you said you were going to concentrate on music rather than education?

G: My dad's a headteacher so it was a weird one for me. I said to my parents I wanted to do it and do it well. They said they believed in me and here we are now. It's a beautiful thing really - if more people had that belief in their friends and children, we'd achieve a lot more as humans. I know that's taking things deep but it's so true. Our position is all about belief and that's why we're here.

A: When George left school, my parents wouldn't allow me to. They probably would have kicked me out of the house if I did. They didn't understand as much as George's parents did. I owe a lot to them and George because while I was doing my A-levels, George was getting his production standard up to a really high level. When I did leave sixth form it meant I could go straight into it.

How have you adjusted to touring so young?

G: We haven't really! We constantly find it difficult. But how can you complain when you're in a place like this [Hong Kong]? I used to complain throughout my teenage years about the monotony of life. I was constantly saying I never wanted a job where I did the same thing every day. Obviously the performance side of things is the same but you're in different places, doing different things. The only thing I'm bad at is sleep, but you've got to roll with that. We don't party too hard all the time but we take the chance when we can.

A: We were chatting to Kaytranada recently about starting out. At the beginning all you want is a gig or to tour. Now, after you've played hundreds of shows you just want to go home.

You jetted out for your first North American tour last year. How did you find that?

G: The mainstream of the UK is driven by Radio 1 and the United States doesn't have that. Without that, things are less predictable. At the moment I think you know what's going to be played at a club in England, but in America it's a different story. You can play the tunes that are big in England and they're really obscure to Americans. You get a more sincere reaction to the music rather than the fashion that surrounds it. I think people in the UK dance to the tune because they want the girl or guy next to them to know they know it.

A: It's funny seeing people dance differently. When we played in New York last year, the crowd split halfway through and there was a dance battle. It was like the kind of thing you see on really cheesy films.

Would you say you're regarded as celebrities back in Lancaster?

G: Not at all. We're not the types to play it up and we keep ourselves to ourselves. The beauty of our position is that we have faces but no one really cares too much about us. I think people just think we're kids doing this thing and we're kind of happy to have that because, in the end, no one really cares about little kids. I wouldn't say our personalities are introvert but we're not trying to throw our cash around.