No beating around the bush here guys: 2020 has been fucking shit. Covid-19 has sucker punched all of our plans in what is starting to feel like a highly intentional and unsportsmanlike way. I’ve achieved nothing except alternate between where I lie down in the gaff, depending on what I’m doing (bed for sleep, sofa for pondering the unflinching cosmic indifference towards humanity and its survival).

Read this next: Throw parties not club nights

So you probably could imagine just how over the moon I was when I found out about the existence of a new type of rave by BigCityBeats called the World Club Dome: Escalator Edition. The premise? Well, simply put, BigCityBeats decided to hire out the MyZeil shopping centre in Frankfurt and fix some decks to its 42-metre escalator (the longest self-supporting escalator in Europe) so they could blast EDM out to people on various floors of the MyZeil shopping centre in Frankfurt as a DJ stands on the escalator (the longest self-supporting escalator in Europe, at 42 metres) while it slowly moves up, and down. 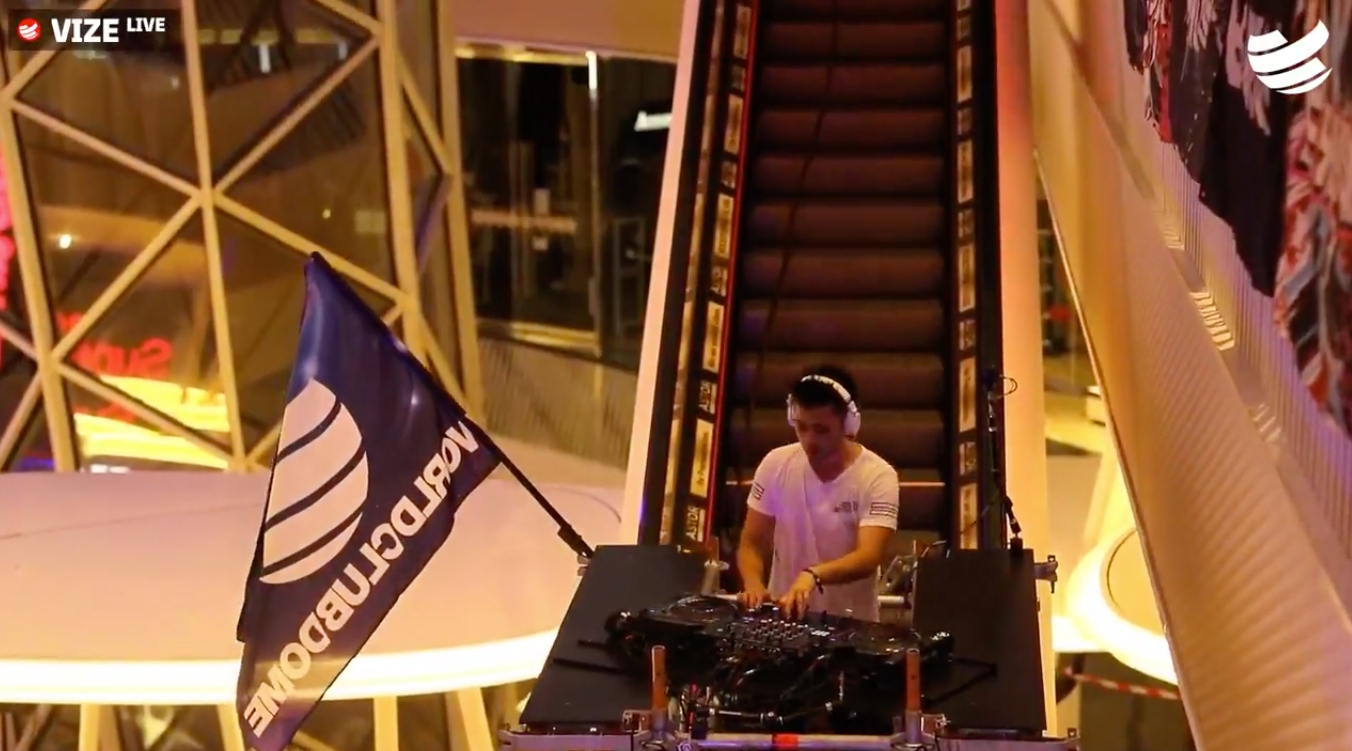 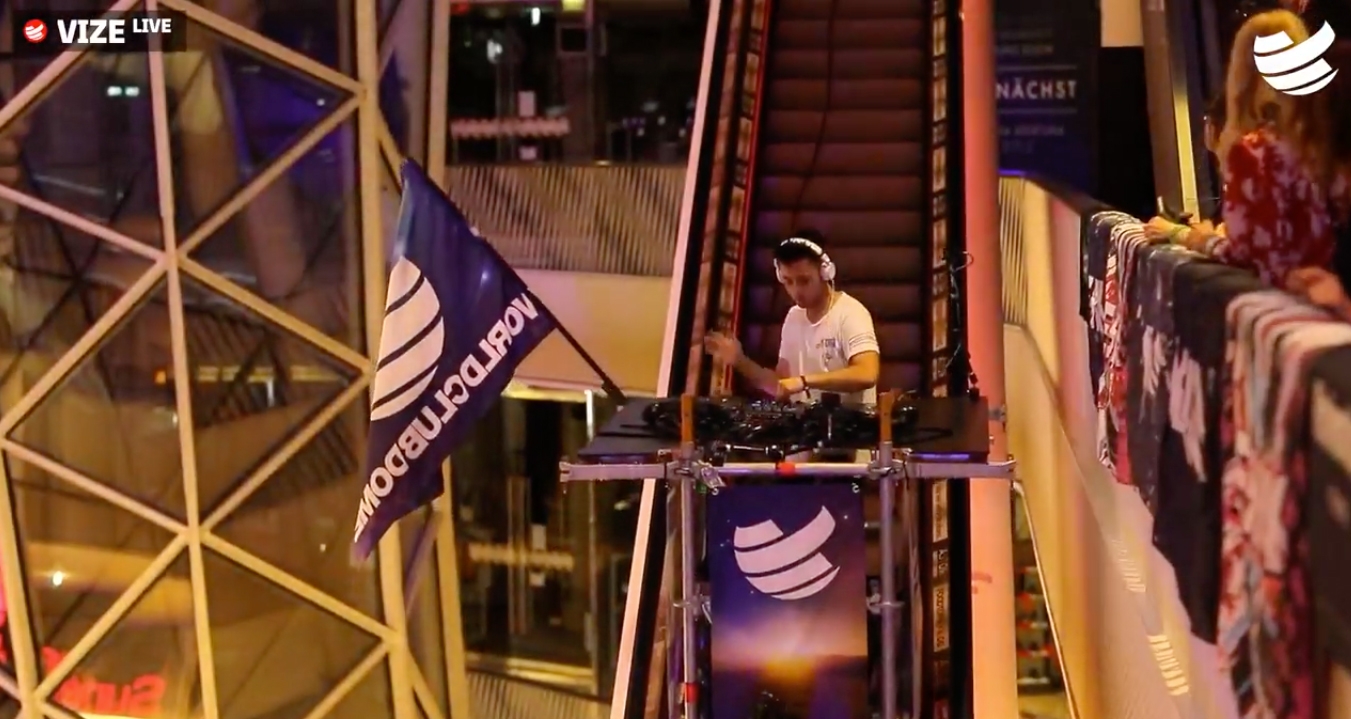 A spokesperson for BigCityBeats said:

“BigCityBeats believes that if the people can’t go to the DJ, then BigCityBeats will bring the DJ to the people...via escalator.”

And they even did the ellipsis before ‘via escalator’ as well, which added a decent sense of gravitas to the occasion.

“The MyZeil shopping centre is proud to have been part of the last roof session,” said centre manager Annet Gurczinski. “The Expressway – the highest self-supporting escalator in Europe – was used for the first time as a DJ desk, and was therefore the platform for the unique Escalator Edition.”

And from watching the livestream, all three of them are absolutely bang on in their appraisals. The show kicked off with VIZE who, according to BigCityBeats is a ‘hotly anticipated superstar DJ’, playing the type of Very Pumping EDM you might hear on a fun fair ride. He wasn’t the most energetic guy – not saying he didn’t have moves because he did – but I’ve noticed that a big part of being an EDM DJ is looking like you’re constantly on the verge of an orgasm, and at this I’d only rate VIZE about 6.5/10. Because of that lack of effective orgasm face, and the slow, mechanical movement of the escalator, combined with the disinterested swaying of the multi-tiered punters, most of VIZE’s set gave the vague impression of how I probably look hungover when I accidentally space out as I’m staring at a wall of rotisserie chickens in a supermarket.

Read this next: How DJ's cope with pre-set nerves

But then came the BigCityBeats resident DJ Le Shuuk. First things first, this guy had the EDM orgasm face down to a fine art, 10/10, and instantly I knew why he was the headliner, he had main event written all over him, and it really translated onto the crowd, all of who seemed to either be waving banners of his name or pictures of his face wearing sunglasses back at him as he hyped them up with a double fist pump action that to me, was unrivalled.

In fact, I wish you could’ve seen me as I watched the livestream, because the sheer force of Le Shuuk’s big room EDM aura made me start pumping my own fist energetically, almost angrily, at the screen. Like I was having such a good, energy-fuelled time I was almost angry.

The highlight of Le Shuuk, and pretty much the whole event, was the bit where, nestled at the top of the escalator, he played a rousing coronavirus themed remix of the Los Del Rio classic ‘Macarena’, but instead of the bit where it goes “Heyyyyy Macarena” it goes “Fuuuuck the Corona”, which I thought was a touching tribute to devastating socio-economic chaos the virus has unleashed. 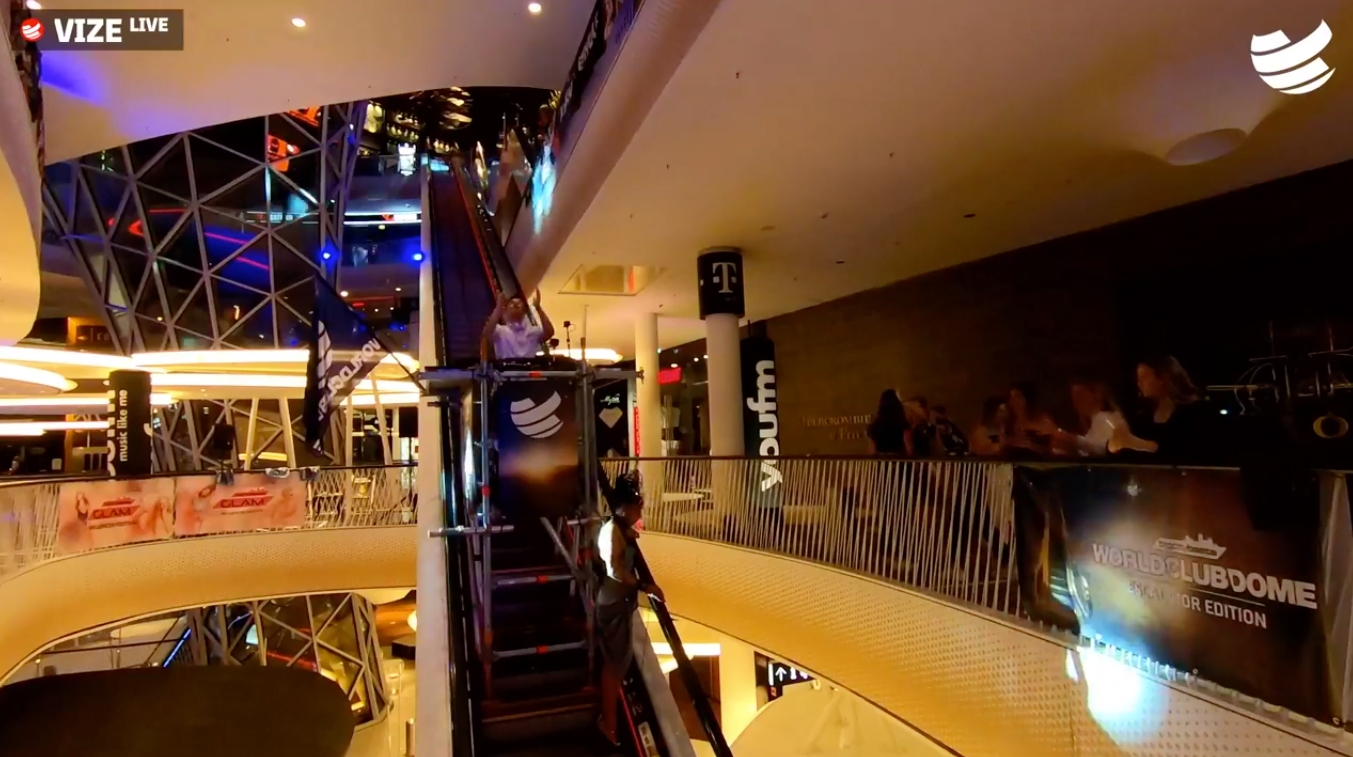 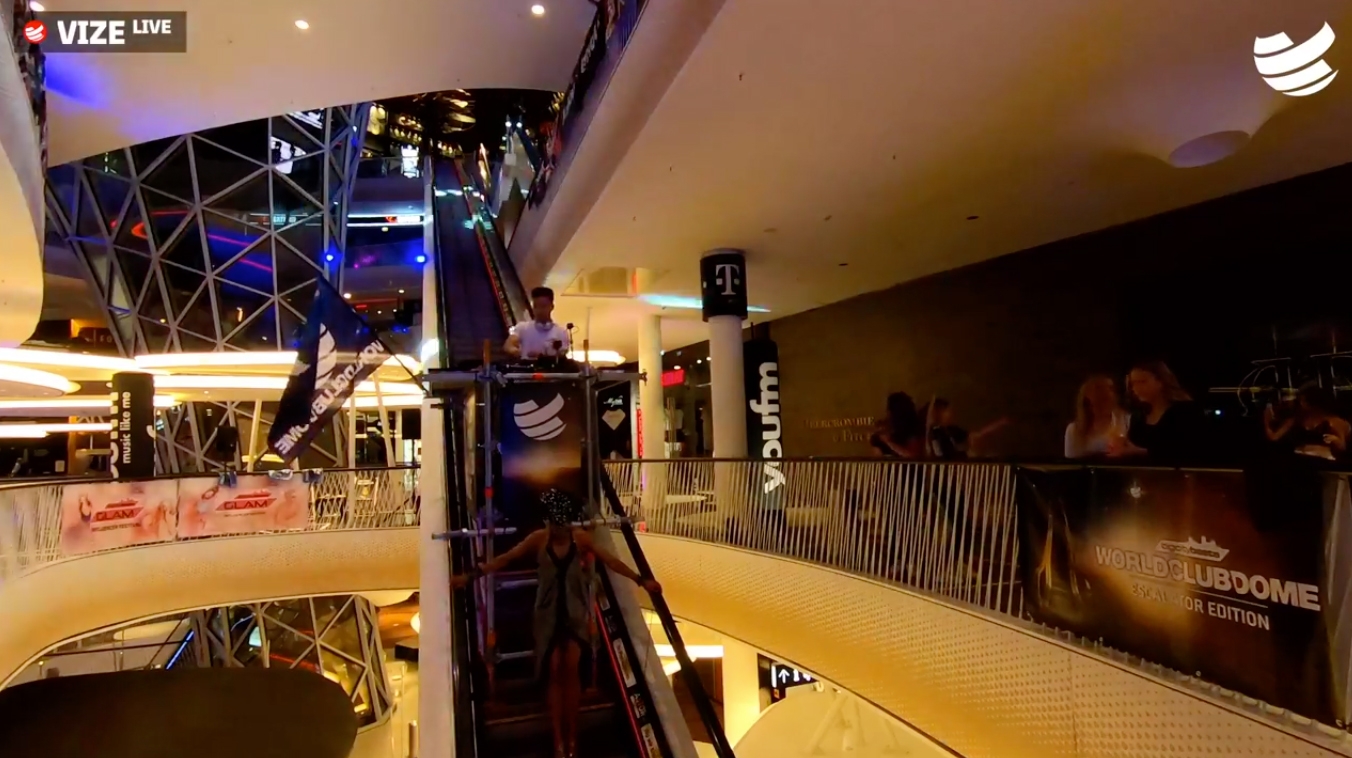 I don’t know why but recently I’ve been thinking a lot about this book called The Myth of Sisyphus by Albert Camus, about this dude who has to roll a boulder up a big hill then watch it fall down to the bottom of the hill and roll it back up again, for all eternity. Basically it’s about how life is just one big struggle, and how essentially all any of us are doing by existing is rolling a big fuck off boulder up a hill and watching it roll back again until we die.

And for some reason, as I watched the BigCityBeats called the World Club Dome: Escalator Edition livestream, and thought about 2020 in general, I was reminded of that book. Not just because there was a huge vibe/allegory going up and down a big slope for all of it, or because anyone was struggling with the futility of existence – if anything the crowd, DJs, and everyone involved looked really happy to be there. And to be honest during this incredibly bleak and stressful year we should all cherish people feeling happy in whatever form that may take, as long as it isn’t hurting anyone else.

But there did seem to be something quite symbolic about watching a DJ as he went slowly up to the top of the shopping centre to drop a big tune, then slowly drifting back down to the bottom again to drop another big tune, then slowly rising to the top again, forever and ever, while layer upon layer of people looked on enthralled, dancing in a privately rented shopping centre, oblivious if only for a few hours to the world outside.

Either way it was a great night, a great vibe, and I would highly recommend catching the livestream if you can.