This is the second of a three part feature series, detailing the ethos and effort behind a few theme-driven art installations appearing at Burning Man 2019. Read about The Folly here.

This year marks three consecutive decades of Burning Man in the vast expanse of Black Rock Desert. These vacant badlands extend for miles, just past the eternally quaint township of Gerlach, Nevada. The town was founded as a gypsum mining operation over a century ago, and it hasn’t changed much since. The 2010 Census registered a town population of 206 residents living in roughly three square miles, and there’s only one main road through the region. It’s a simple place, ripe with solitude in its isolation.

But in the desert, just beyond Gerlach’s city limits, Burning Man has pioneered an ambitious medium of societal interaction; a deranged and dusty, yet artistically decadent refuge from the sterility of the Default World.

Each year, from the end of August through Labor Day, this modest corner of northwestern Nevada becomes the third-largest city in the state. Gerlach’s panoramic backdrop provides a platform for nearly 70,000 Burners to frolic in an other-worldly display of human fortitude, generosity and showmanship. These participants transform an otherwise uninhabitable landscape into a thriving metropolitan oasis with uncut glee.

The only currency found at Burning Man comes in the form of smiles and sweat. The incentive to create comes from within, and to share the best of ourselves with one another in earnest fashion. Everything is a gift, without the expectation of anything in return.

Dan Mountain is the creator of I.L.Y., a New Jersey-native who relocated to California in 2009 after some happenstance encounters at his first Burning Man.

“I ended up going on a road tour with a bunch of friends when we were in a band. I ran into this girl a couple times during our journey, and then I saw her again during my first Burn in ‘09. I ended up moving out to California to see how that would go, and for a while it was good, but then it wasn't so much," he laughs. "You know how those things go.”

In any case, Mountain was in California to stay. He continued to attend Burning Man as a citizen and participant until 2015, when he was pulled onto the the Temple of Promise build team. While assembling that wonderful cornucopia of love and remembrance, Mountain was introduced to his now-chosen family. These connections had a catalytic effect on Mountain’s mindset, as producing large-scale, interactive art for the playa with this community immediately became a focal point of his purpose.

“That’s when shit really changed,” Mountain said, speaking of the Temple. “Suddenly, I recognized a whole different side of the playa that had been in plain sight. You’d have no idea how many people in the crowd were artists and builders and crane operators and volunteer coordinators. All of these people that are putting on the event, which is such a huge undertaking. It was cool to delve into that undercurrent, get to know so many capable builders, and be more on the production side of things. My years are now determined by it, with all of us thinking ‘OK, what projects are we going to work on next?’”

These next projects were no small feats, either. Mountain has been a major contributor to a number of massive structures at Burning Man, including the Catacomb of Veils and The Lighthouse. He's also volunteered with Art Support Services, who help art and artists reach their goals on playa.

Mountain and the Temple of Promise build crew first came up with a varied iteration of I.L.Y. in 2015, which was initially conceived as a complex grove of hands, with touch-screen panels and a puzzle-like simulation. Eventually, over a fateful round of drinks one night, Mountain flipped the entire idea on its head in a new spark of inspiration.

"I had this rush of thoughts and realized I should turn the hand into something massive, and metal, and fire breathing,” Mountain remembers. “So it snowballed from an idea that I had when I was stoned, into this insane platform to show off at Burning Man. All of this happened over the course of about 30 seconds, and I didn’t expect this at all. I just wanted to make a big sculpture that you could move.” 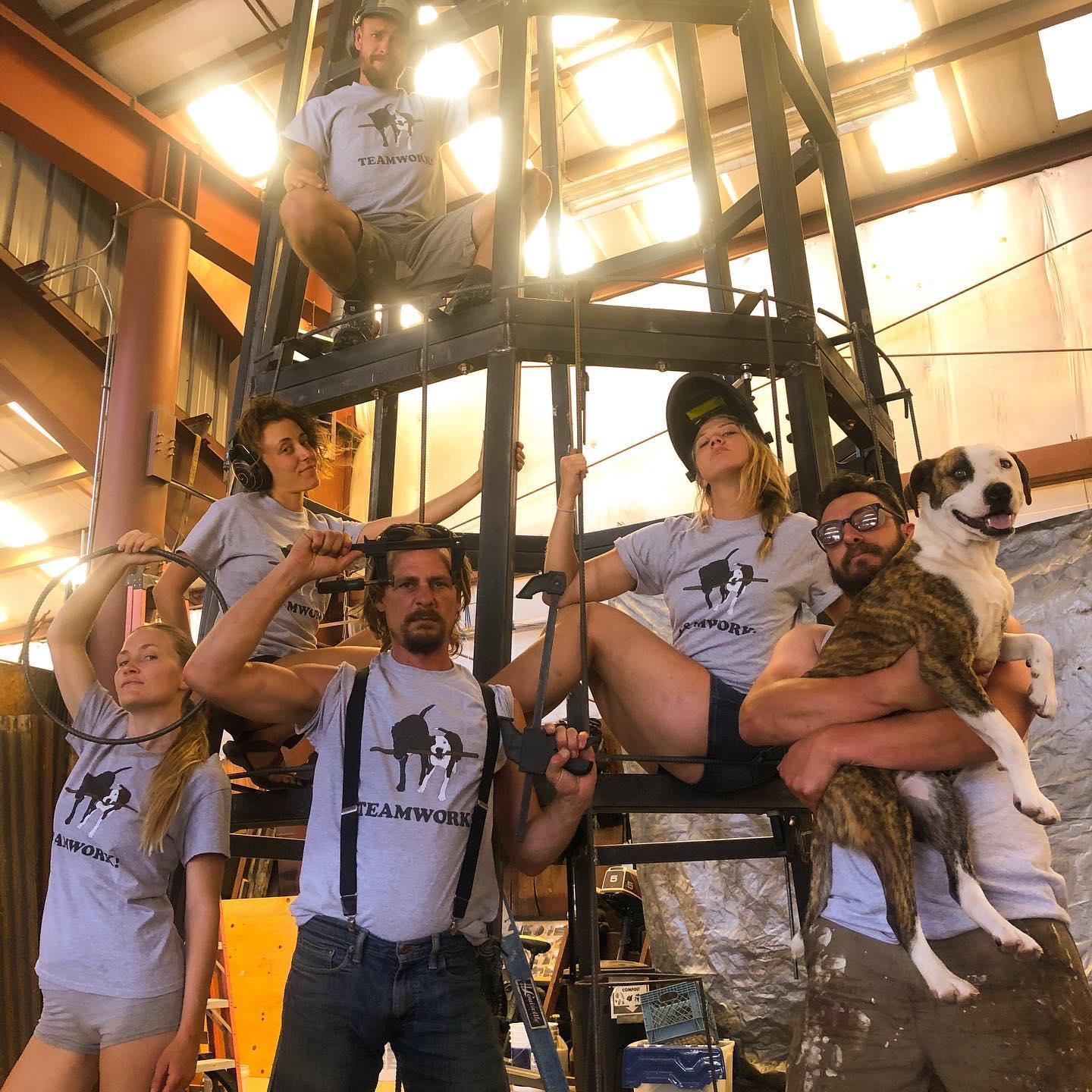 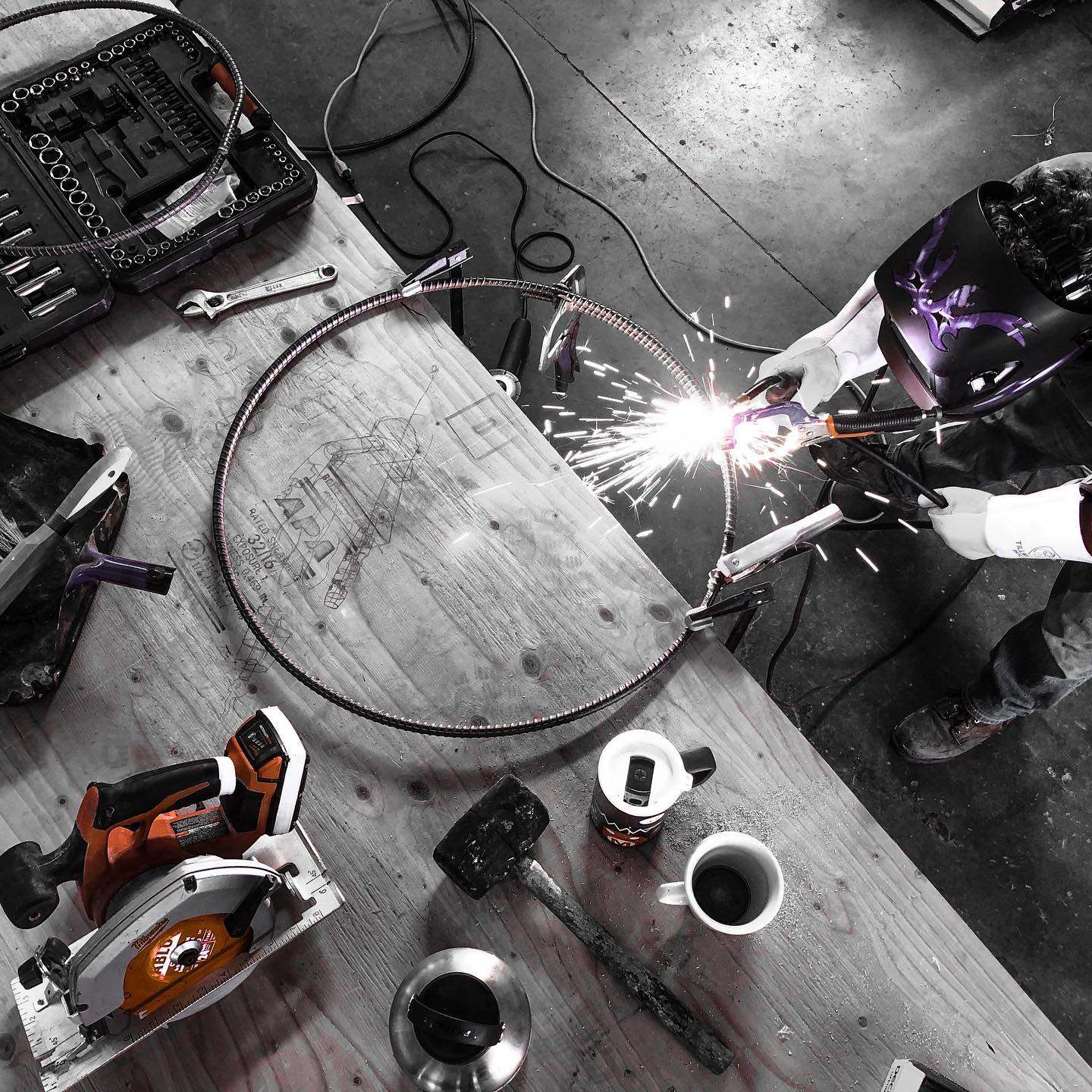 Mountain and his team recently completed the structure at Agapolis, his homestead and creative community in Portola Valley, on 22-acres of lush, redwood forest just south of San Francisco.

I.L.Y. is a massive, animatronic hand and forearm, emerging from the playa at the elbow and standing 35 feet tall. Each finger of its metallic extremity can be manipulated by a series of spring, cable and winch systems positioned around the base of the structure.

These systems effectively mimic the tendons and ligaments of a human hand, allowing I.L.Y. to have a full range of motion. Participants are able to close a fist, open a palm or give the finger.

“Each one of the fingers is individually maneuverable,” Mountain said. “So you’re riding along, maybe a dust storm is happening, and you look over and see a couple fingers. You then look away, but happen to glance back a moment later and it’s in a completely different position. You’re going to say, ‘WOAH, wait a second…’ and have to go investigate, and hopefully choose to engage.” 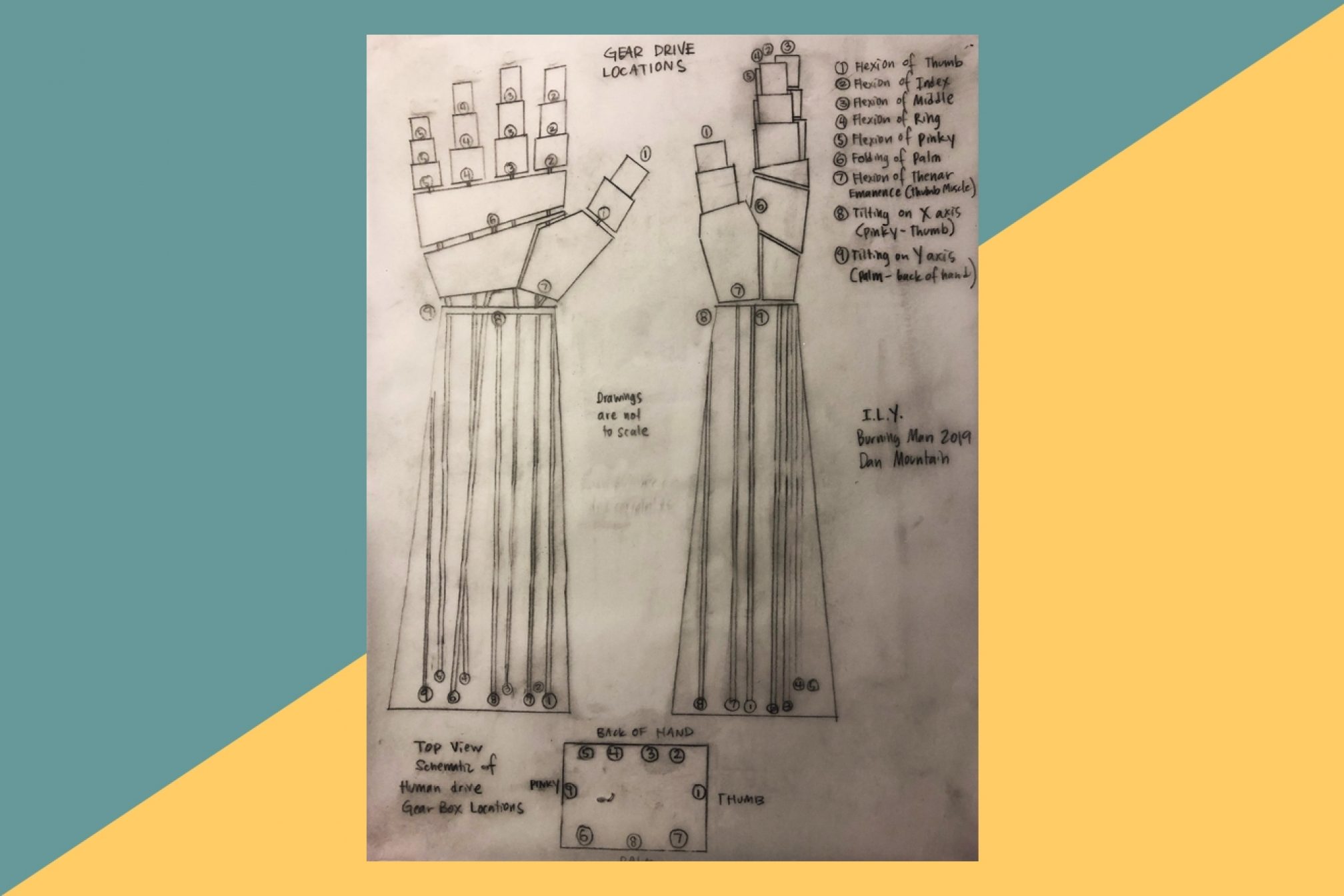 With the help of some last minute fundraising and his crew of Lightning McGuyvers, Mountain has also managed to equip I.L.Y.’s fingertips with bonafide flamethrowers. After the structural components were assembled, it was a common and understandable consensus to prioritize launching pyrotechnic glory at will... because of course it was.

Mountain’s team has breathed a lot of life into this piece, and he’s notably humbled to have received so much support and encouragement. “Our project manager Lindsay Schaefer was a huge resource in actually making this thing come together. She connected me with Big Chief who did the pyro for The Pier, and now he’s running all of our flame effects," he explains. "Lindsay also introduced us to a couple Canadian metalhead badasses who’s helping us build, while leading some of our pyro and flame-throwing effects as well.”

Bringing people together to reach a collective objective is the true heart of I.L.Y.’s offering. It’s a medium for old friends and new acquaintances to connect, while adjusting the appendage as an extension of themselves. Mountain has witnessed an increasing aversion to self-determination in society, with the rise of convenience culture and the decline of personal interaction. Today, the risk to be yourself while open to the experiences of others can be ominous notion, and this all-too-common aversion is captured by the daunting appearance, yet playful mission of I.L.Y. 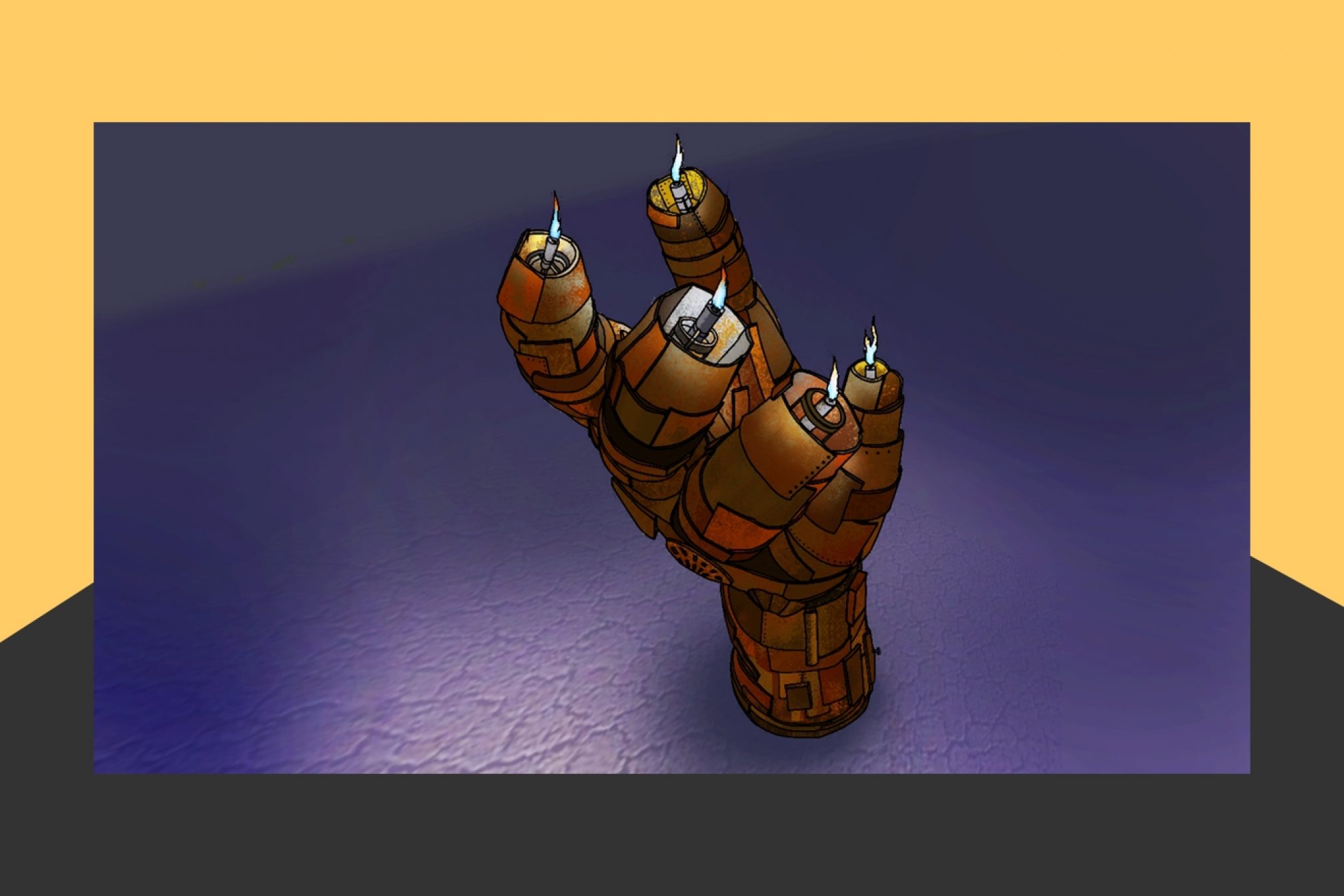 This rusting, bionic limb is indeed reaching out to be seen and felt, as most of us are. Despite the knee-jerk reactions of what in the heck is that thing, or I fear vulnerability with others, new and foreign experiences are often far less arduous than we expect them to be. I.L.Y. seeks to challenge these preconceived notions and replace them with an expectation of intention, connection and joy.

“We’ve made a big, scary, fire-breathing left hand made out of garbage and metal. It’s an intimidating sculpture, but you can still tell that it wants to be played with,” asserts Mountain. “It’s an interactive project that can really make some magic for a group of friends or strangers. But, from afar, it’s pretty terrifying. So you need to self-motivate to get up close to it and really engage. It’ll require using your resources, thinking on your toes, and being able to clearly communicate with someone that you’ve never met before. Hopefully there will be some moments when people make a friend for life.”

The Burning Man art you have to see: The Folly
The best ways to keep your Burning Man fashion eco-friendly
The Burning Man dictionary: Playa vernacular that you need to know
Get the best of Mixmag direct to your Facebook DMs