Brazil was undergoing a dance music revolution at the turn of the millennium. Fast and hard sounds such as drum ‘n’ bass and bass music were filtering down into the South American nation and fusing with Latin American styles to forge entirely fresh takes on the rave music that exploded in popularity through North America and Europe across the late ‘80s and ‘90s.

Furious styles such as funk carioca, a raucous blend of hip hop and soundsystem influence, and sambass, merging drum ‘n’ bass with Latin rhythms from samba and bossa nova, emerged from the streets to become cultural movements.

Read this next: Desande is the dance music movement taking over the Brazilian mainstream

One of the leading sambasss innovators was DJ Marky, who played a pivotal role in popularising dance music in Brazil during this time before growing into a global icon, including becoming the first Brazilian to land a fabric residency.

This month DJ Marky’s Innerground Records celebrated its hundredth release since launching in 2003. ‘Innerground 100’ is a 14-track compilation showcasing the Latin take on d’n’b the seminal label has become celebrated for, with contributions from Random Movement, Alibi, Collette Warren, Paul SG, Pola & Bryson, Carlito and more. You can buy it here.

Read this next: A new superclub is opening in Brazil next month

To mark the release of the record, DJ Marky has shared a gallery of images from Brazil’s rave scene in 2002, taken by the photographer Fabio Mergulhão, and talked us through the selections. From 600,000 ravers taking to the São Paulo streets for Parada da Paz to debauched clubs such as Lov.e, these photos capture a time when the spirit of creation and newness was in the air. 2002’s raving must have been inspirational: Marky launched Innerground the following year, and the rest is history.

Check out the gallery below alongside descriptions provided by DJ Marky himself. 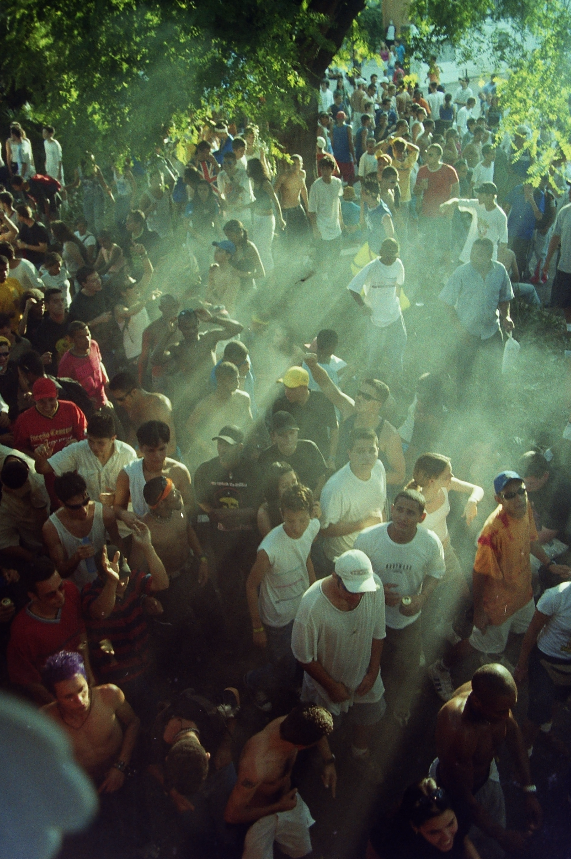 ''Parada da Paz was kind of like the original, Berlin version… Every time I arrived it was absolutely mental… we had to have security and in some years even the police, as the crowd was too crazy. I went to play d'n'b on the truck and you would see 600,000-700,000 people watching, having the time of their lives!"

"The Lov.e Club was one of the most incredible clubs in Brazil’s history. I played the first night and, just over 10 years later, the last... magical days... I miss the raw vibe in many ways. When I came back from Brazil, people were desperate to hear the new white labels (3-4 record boxes worth after some trips) — the queues were always legendary, just like Bar Rumba’s… sometimes you would see 2,000 standing, waiting to get in and the club only held 700 people!"

Read this next: Brega funk is the music of Recife that's taking over Brazil 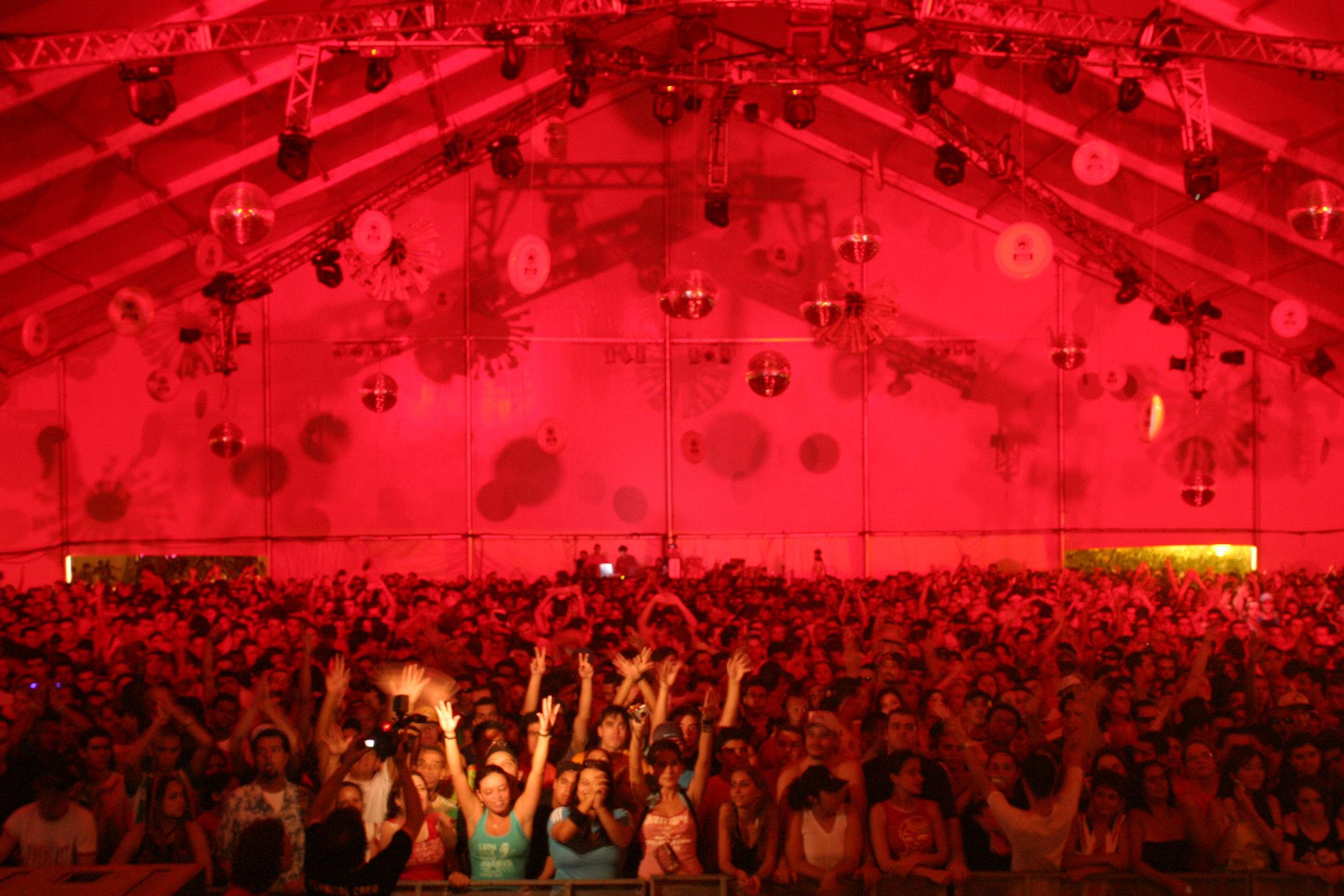 "Inside the Marky & Friends tent at Skolbeats Festival Brazil – it was the busiest tent in the festival every year. We had more than 15,000 people in this tent. The other tents at the festival had other genres like house and techno, but even the people from these tents would end up drifting towards our tent." 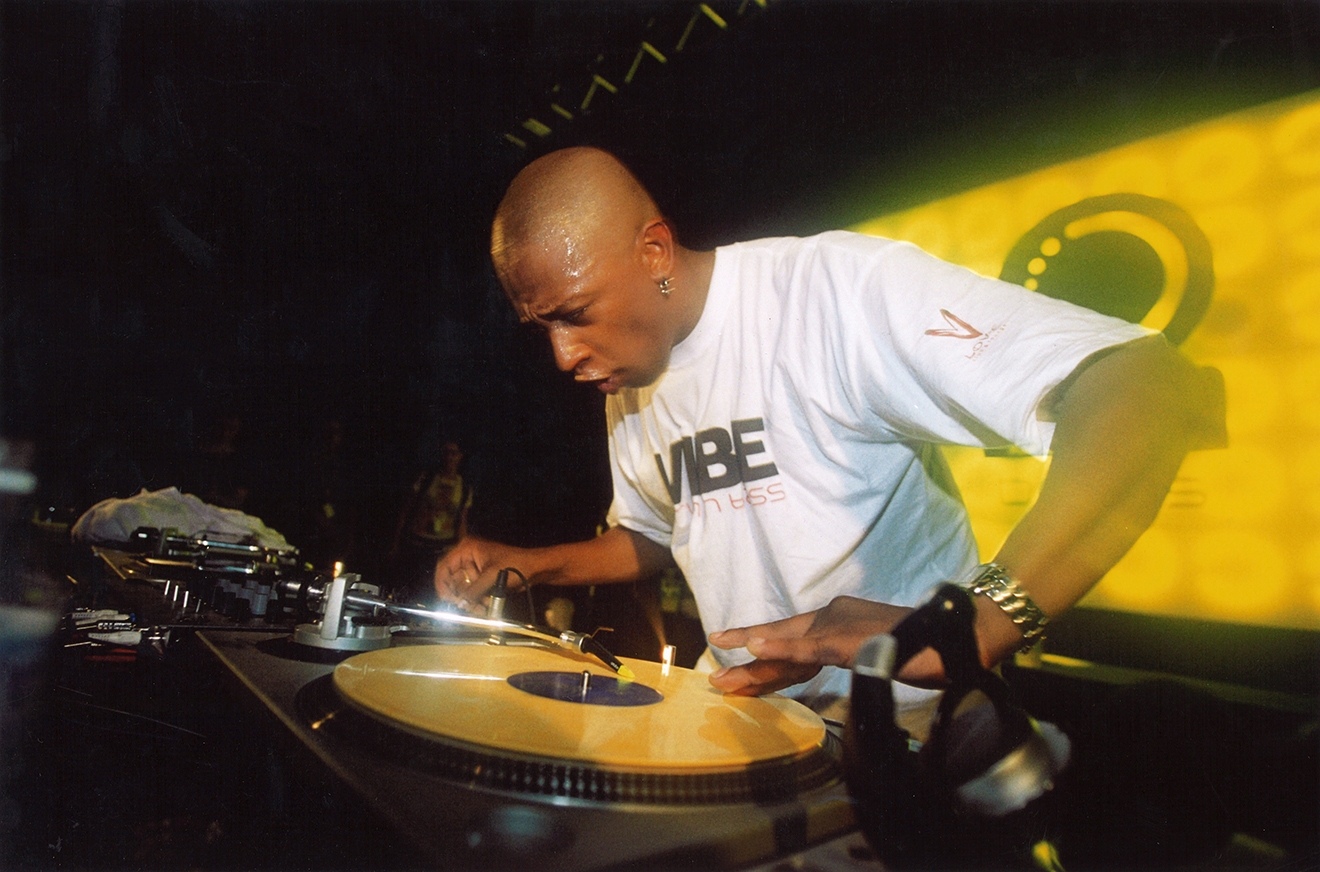 "Skolbeats Festival – VIBE T-shirt was my night at Lov.e club. I played this club for 10 years. I opened the club and closed the club. On my arm you can see the red heart logo of the club."

Read this next: We went to the vinyl factory that's kickstarting Brazil's homegrown vinyl scene 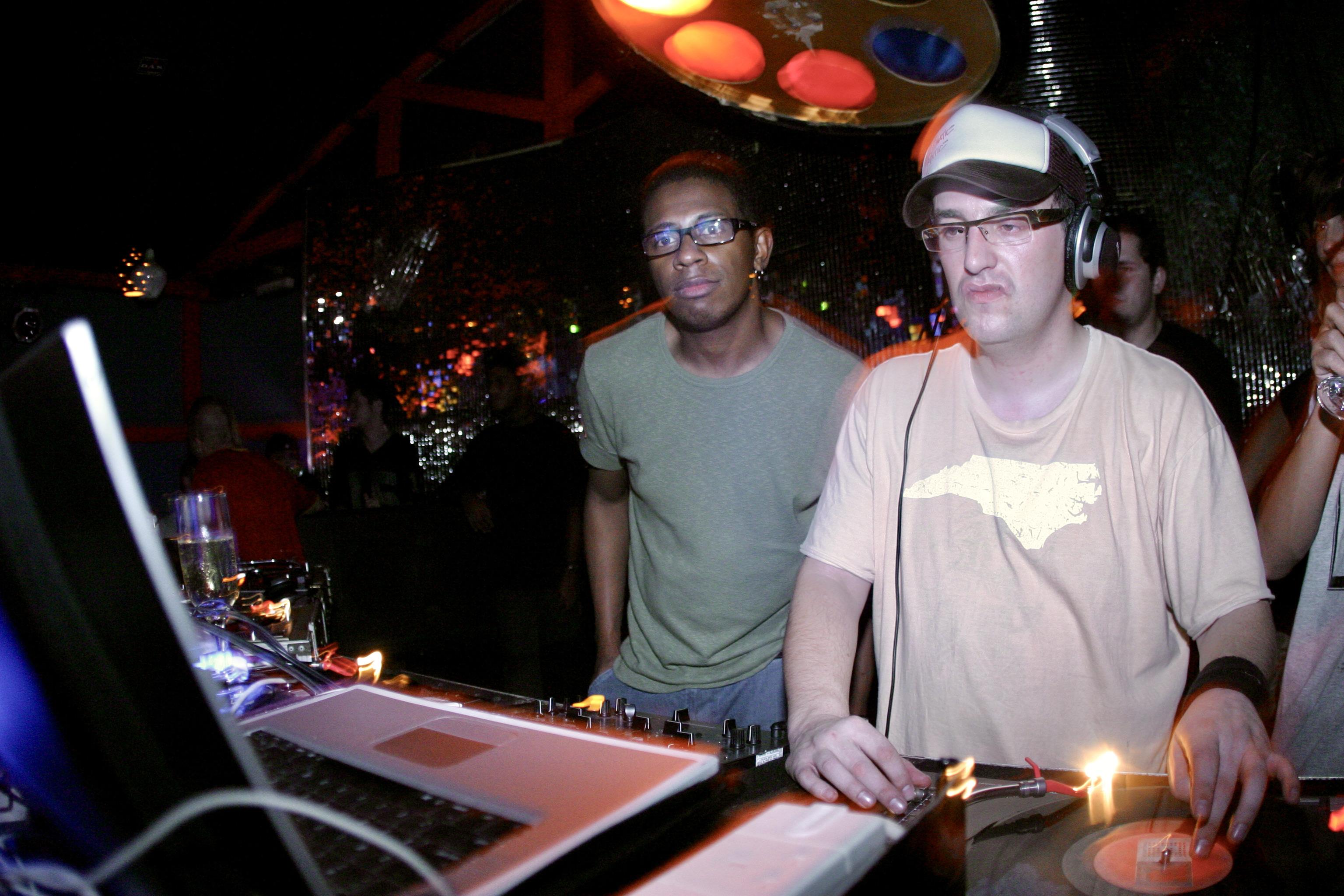 "At Lov.e with my good friend Marcus Intalex. It was his first visit to Brazil, he visited me many times. If you look at the turntable he’s using the Final Scratch program which was the very first DVS controller (even before Serato). The crowd that night was huge - the official capacity of Lov.e was 700, but we were definitely above the 1,000 mark!" 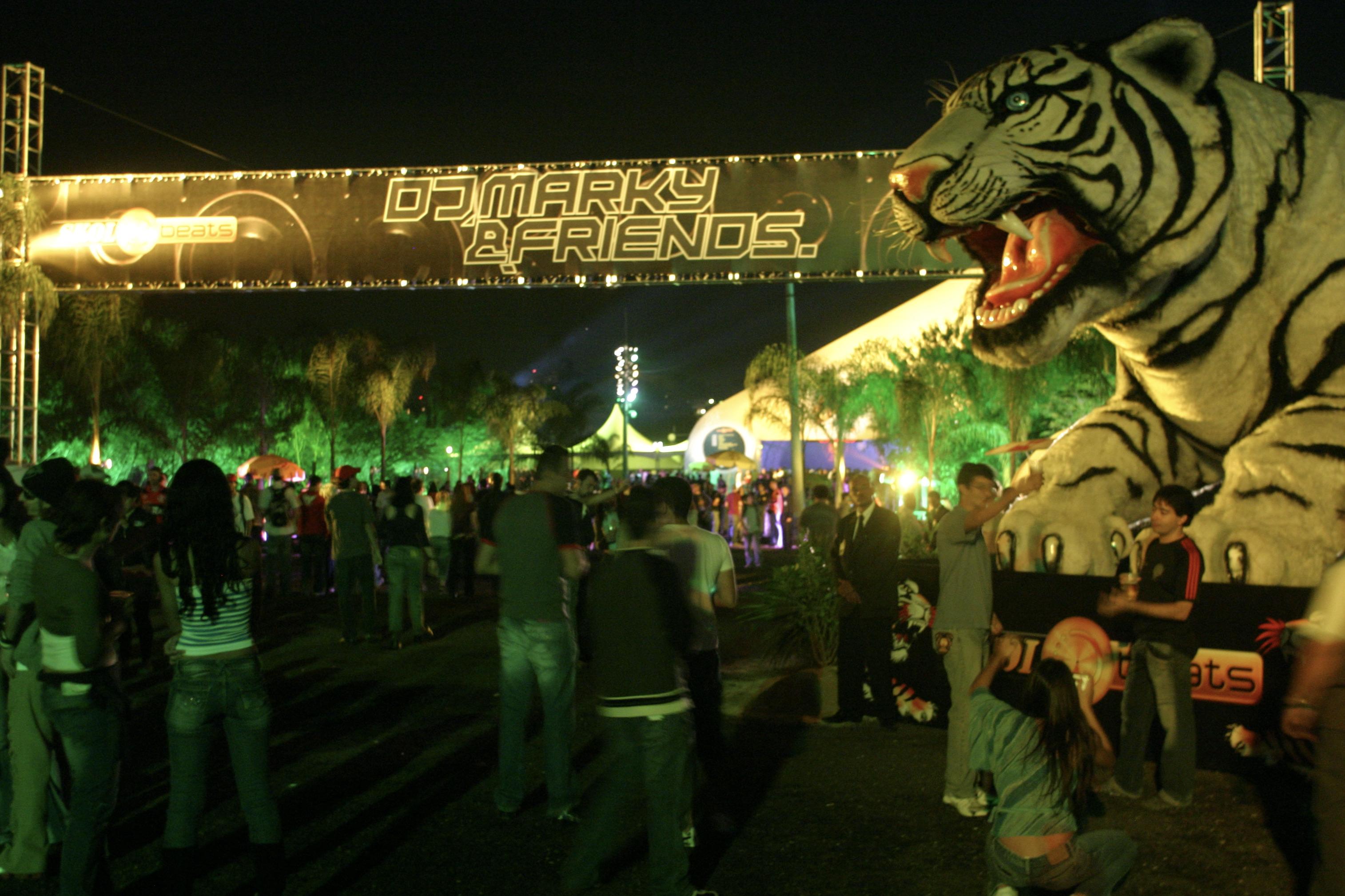 "This is the entrance of the Marky’s & Friends tent at Skolbeats. The bass would rumble from the tent across the entire festival, you could feel it!" 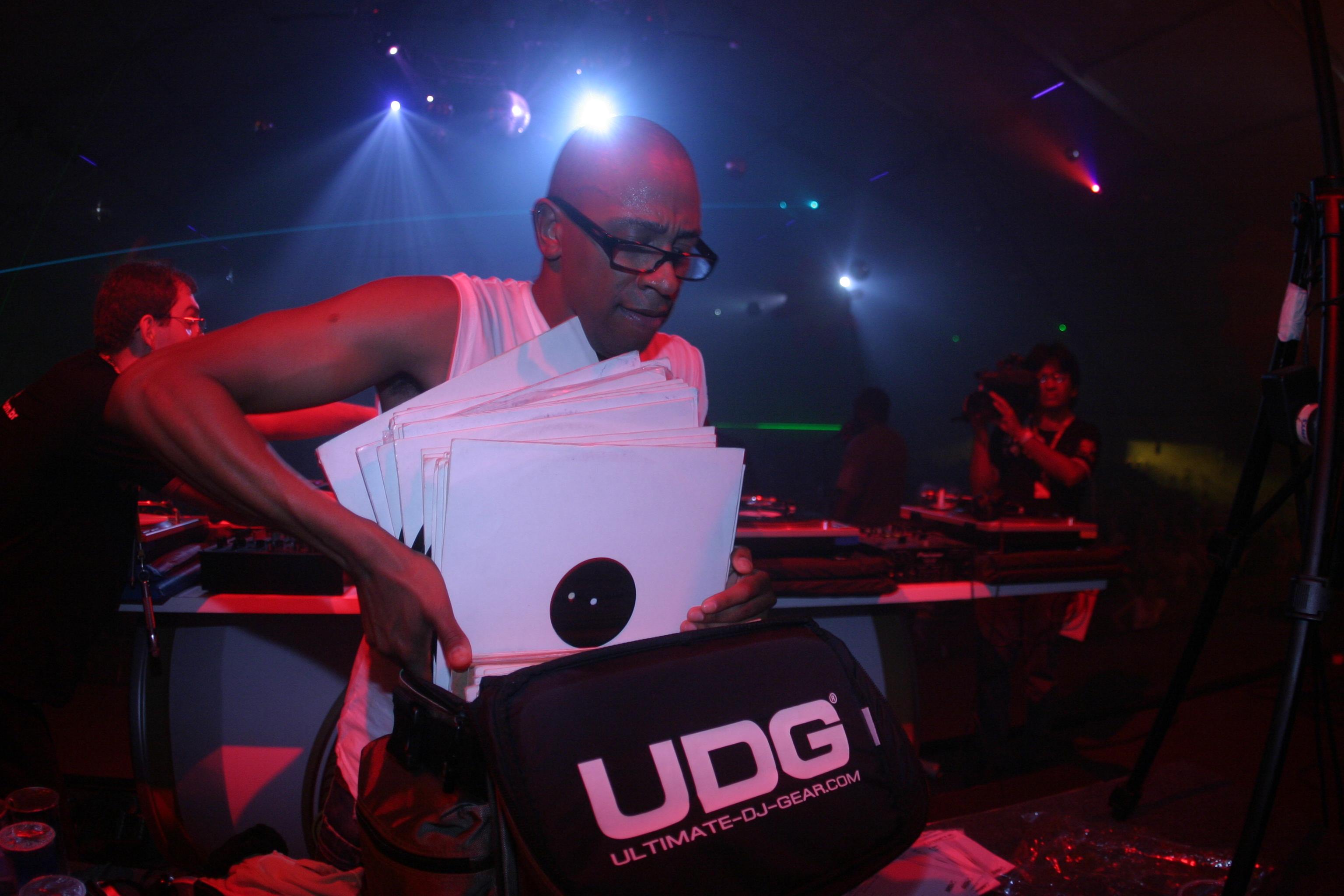 "Can't remember where this festival was but I know for sure - that bag was worth a lot of money… dubplates were how we'd share exclusive tracks between each other. We would then educate the crowd with tracks they'd never heard before! My friend Beau Thomas (now Innerground’s vinyl mastering engineer) used to cut the dubplates for me. Fun times."