“Turn that shit off!”

Laura Dern spits the command at Jeffrey Nordling near the end of last Sunday’s Big Little Lies. The two play Renata and Gordon Klein, wealthy Californians locked in an escalating marital battle as Gordon is prosecuted for securities fraud. Their scenes crackle with hostility; Gordon glares at Renata, then allows his finger to slowly descend toward his iPhone, abruptly cutting the music. The silence is instantly filled with Renata’s exasperated sigh.

Although the song only plays for about twelve seconds, the effects of the bouncing, echoey dub and soaring keen of Massive Attack's 'Karmacoma' linger, adding depth to a series that has always oriented itself around diegetic sound.

The song choice provides a glimpse into Gordon’s inner life, as does the set of his man cave. The room is Gordon’s hideaway, and it’s dominated by a model train that glides through an elaborate cityscape perched on rolling green hills. Gordon towers over this miniature kingdom like an overgrown child, while his wife's aggressive outburst looms like an approaching hurricane.

The man cave is an unsettling diorama of the show's larger themes: the muddy boundaries between adult and childlike behavior, the fragility of power, the artificiality of Monterey. But it’s the song that makes the scene. Adding depth to the dense imagery and sparring dialogue, 'Karmacoma' is an uneasy meditation on how innocuous and violent events can occur simultaneously. 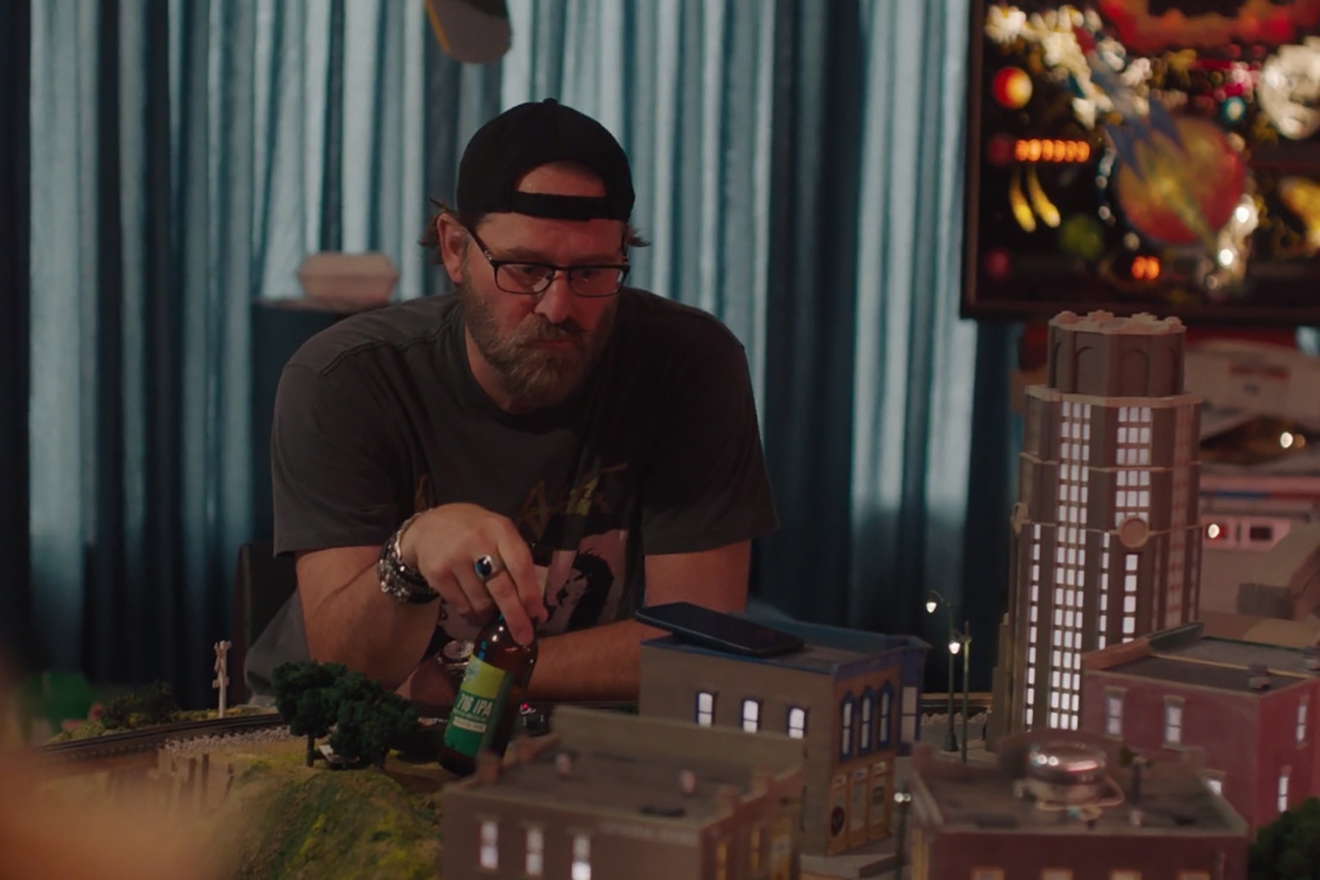 Despite its spacious beat, 'Karmacoma' is surprisingly airless, like a hot summer night, thanks to the way Tricky’s vocals nestle into the cricket-like drone. It’s an effect that’s visually echoed. Until this point, the Kleins’ house has been defined by sweeping ocean views, vast windows and towering heights. But as Renata and Gordon argue, dark curtains are drawn against the afternoon sun. The couple who, just a few days before, celebrated a poolside photoshoot are now shutting out the world and sitting with their shame.

Other details add to the effect, extending the atmosphere 'Karmacoma' establishes. The scene is crowded with a chaos of distractions. Framed pictures pile up on the white walls, and model airplanes hang low, jutting into view. Behind Gordon, glass shelves piled haphazardly with bottles of alcohol compete with the buzz and glimmer of vintage arcade cabinets.

In lyrics that lay just beyond the snippet Big Little Lies excerpts, 'Karmacoma' explores the doubled violence of war and sex. When 'Karmacoma' was originally released in March 1995, its reference to Kuwait reflected the tensions that lingered after the Gulf War. In Big Little Lies, the sense of doom swells to contain our 2019 preoccupation with climate change – the impending end of the world the episode takes its name from.

The lyrics also blur the line between sexual attraction and threat. "Walking through the suburbs though not exactly lovers / You're a couple, 'specially when your body's doubled," Tricky softly raps on the original track, leaving the listener to wonder whether the body in question is doubled in pleasure or pain. It’s an image Big Little Lies’ Celeste returns to again and again, in therapy, conversations with friends and the solitude of her private thoughts. Though the lyrics aren’t included in the episode, even the song’s instrumental portions seem charged by the same blend of violence and eroticism.

In the scene between Gordon and Renata, dialogue about troubled sex stands in for the lyrics. "Penetrating you was like piercing a cement wall," Gordon tells Renata, voice dripping with contempt. Despite his efforts to “chip through,” Gordon has noticed that his wife’s guard is back up – although he doesn’t yet realize that the gravity of Renata’s corrosive secret.

Always a tech-bro manchild, the stress of Gordon’s arrest sends him even deeper into arrested development, tinkering with toys and listening to ‘90s music. But despite it all, Gordon’s lines reveal that, like other family members of the Monterey Five, he is clear on one thing: Renata is hiding something. “There is something going on with you,” Gordon accuses her, then watches her squirm.

“Sell your shit,” Renata retorts, and 'Karmacoma' sweeps back in as she slams the door behind her.

Michelle Delgado is a freelance writer based in DC. Follow her work online, through her newsletter, or on Twitter.