Bukom in Accra, centre of the Ga community, has long been populated by fighters of many sorts. In the literal sense, the likes of boxing greats David Kotei, Isufu ‘Ike’ Quartey, brothers Joshua and Emmanuel Clottey, Bukom Banku and possibly Africa’s greatest champion, Azumah Nelson, were all products of the coastal town, which seems to have a knack for moulding stalwart men, ready to raise their fists for kin and country.

Wanlov The Kubolor & M3nsa, also known as FOKN BOIS, are fighters of a different sort. Part Romanian, part Ghanaian, Wanlov walks the streets of Bukom, the soles of his feet black with earth, waving to children calling out “Kubolor! Kubolor!” and stopping to carry bags for an elderly woman getting out of a taxi. He straddles two worlds and neither, and has an uncanny ability to speak the minds of his fellow Ghanians while garnering respect in two seemingly unrelated societies. M3nsa, meanwhile, spent over a decade in the UK and is a man of a very animated expression, with cheeks that rise and fall with more variation than any one single society has words for. Considered one of Ghana’s most progressive outfits to date, FOKN BOIS’ seven-track EP tackles themes of repatriation, social media’s influence on society and more, and could not have come at a better time.

Read this next: One dance: Ghana's Asa Baako is the festival set on uniting African music lovers

2019 marked the 400th year since the first of nearly 12.5 million Africans were shipped to the New World as slaves, and just a kilometre away from Bukom looms the prison and fort in Jamestown built by the colonising British. During ‘The Year of Return’ in 2019 their descendants from across the diaspora were invited to return to experience their lost home or even build a new life in Ghana. But while much progress has been made, particularly through tourism campaigns, music videos, movies and cultural linchpins such as Ludacris, Boris Kodjoe and many more having spent their holiday season in Ghana to commemorate this important time, people of the LGBTQIA+ communities still face derision and can even be victim to physical attacks, as well as ostracism – often by their own families – raising the question of just how ready Ghana is to receive its people. 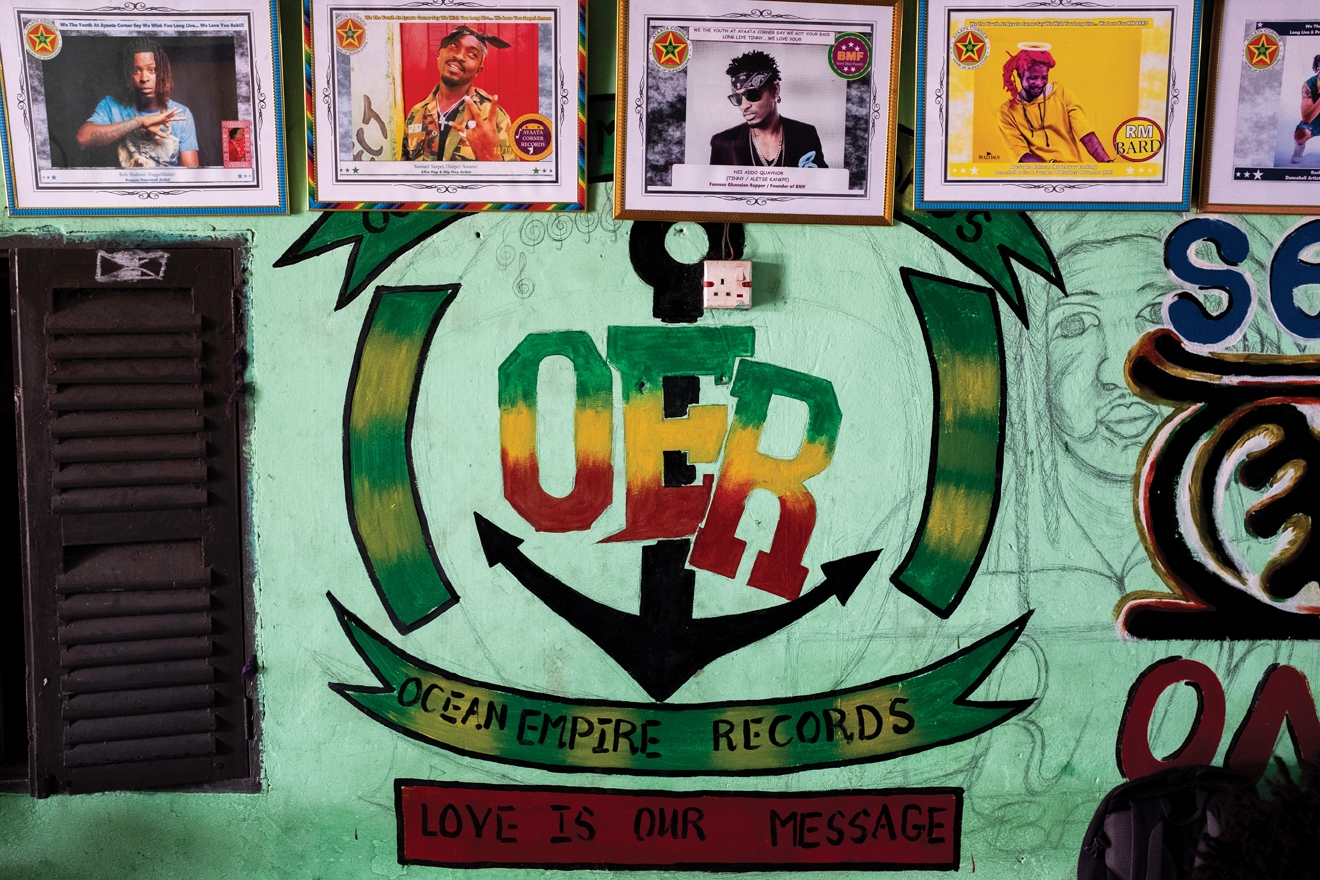 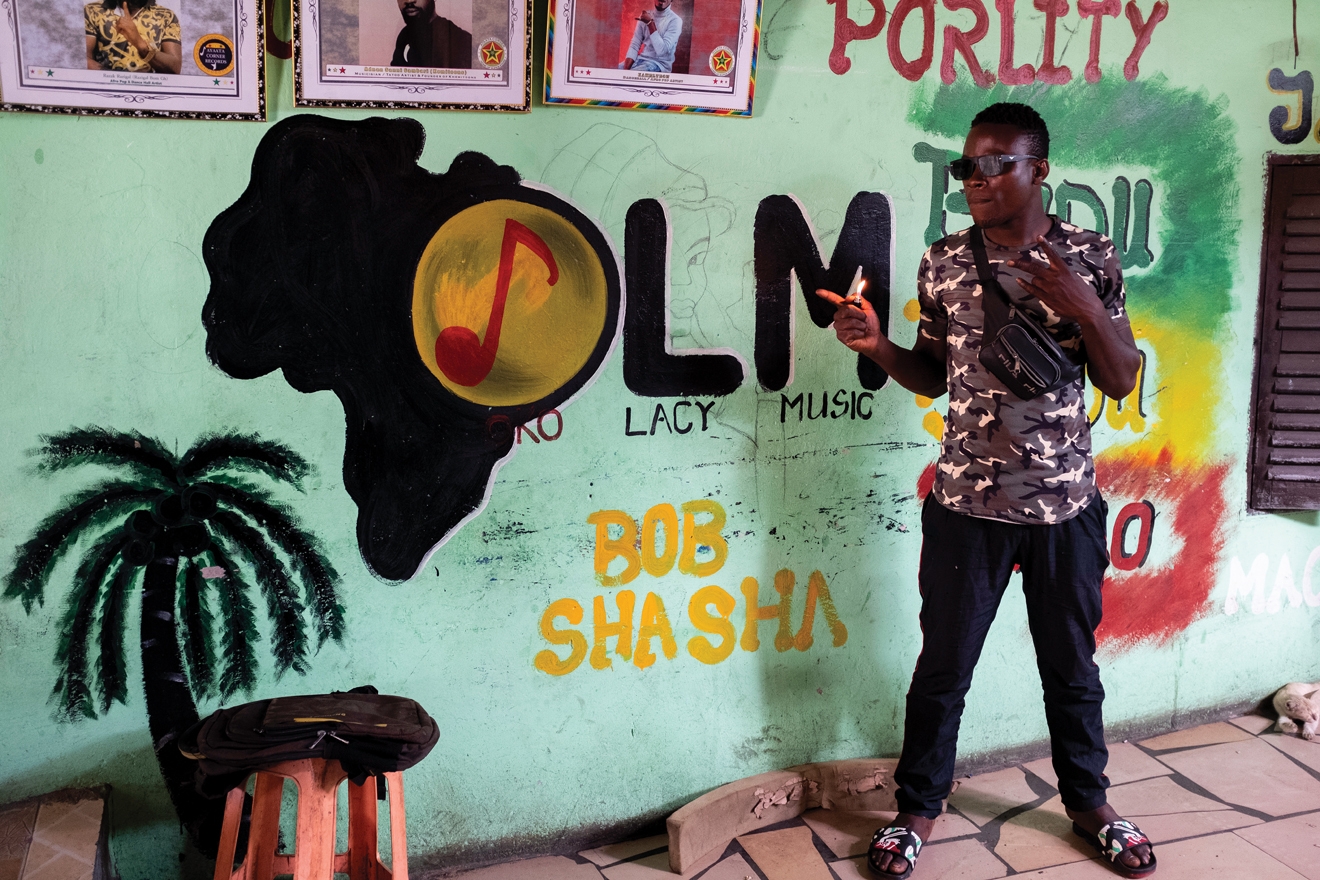 A deeply religious country, homosexuality is unlawful in Ghana, in part due to the influence of Christianity, colonial and Sharia laws. Some Ghanaians even describe homosexuality as a ‘symptom of poverty’. It can seem as though the colonisers, who (at least in their institutions) have tackled such discrimination, continue to hold the minds of Ghanaians in a tight spectral grip – even in independence. Many countries across the continent are the same, with homosexual acts punishable by life imprisonment or death, and queer creative scenes in these places largely unestablished and difficult to define.

Read this next: Keyzuz is the DJ seeding electronic music in Accra's alternative venues

Indeed, before releasing ‘Afrobeats LOL’, FOKN BOIS were offered $100,000 by a potential investor on condition that the Bois change their artwork and band name, which the investor felt gave off a “gay vibe”.

“The Bois told them to fok off,” reads the intro to the music video for a track entitled ‘True Friends’. The video was shot at Ayaata Corner and directed by Mutombo, who is no stranger to groundbreaking visuals, having worked on projects such as Amaarae’s equally controversial video for ‘Like It’ featuring a cast in drag. Bukom is among the most progressive areas of the country, so was a natural fit when it came to the location – and nowhere in Bukom more so than Ayaata Corner. 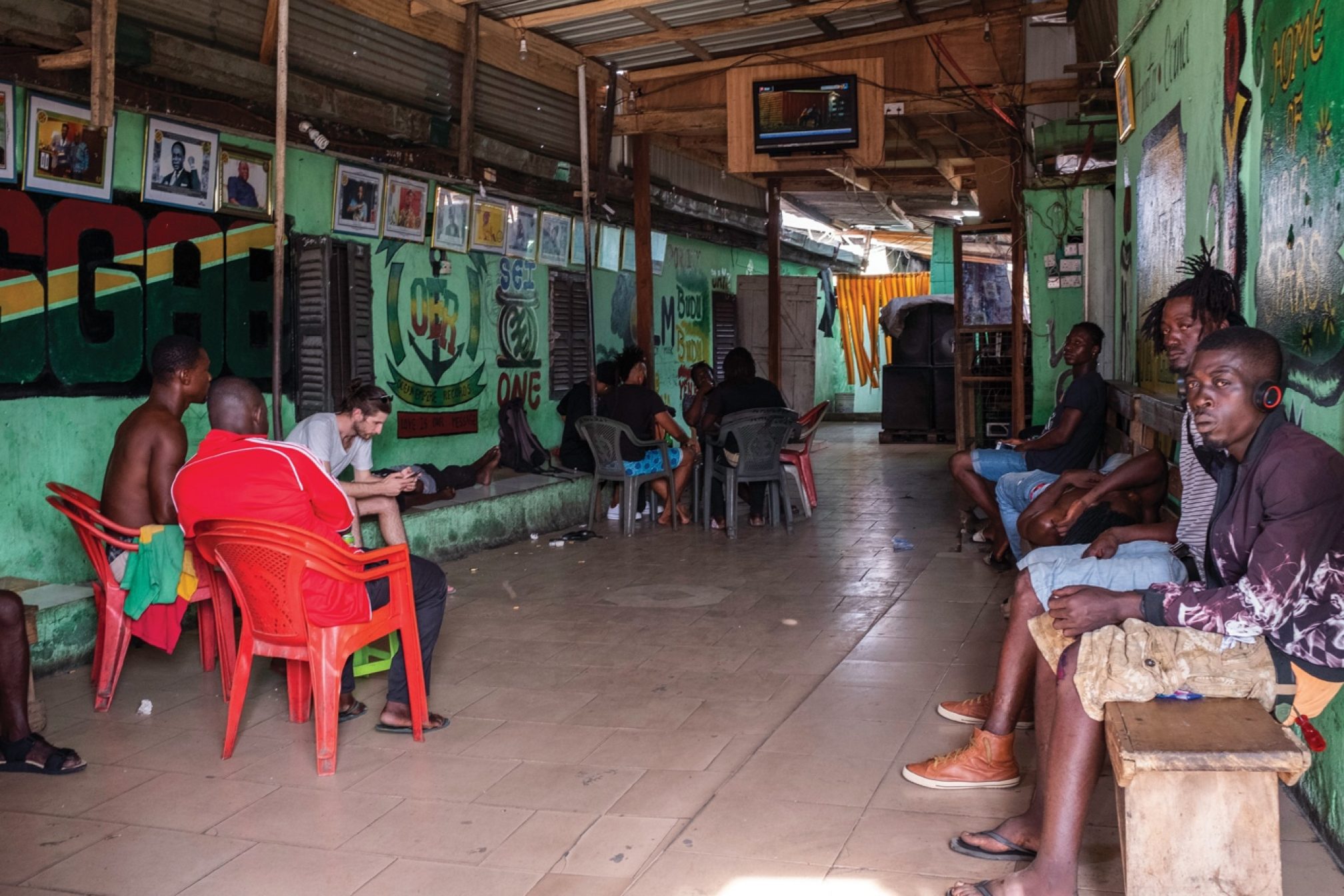 “Everybody here is equally human,” says M3nsa, translating for a young regular beside him called Awudu Iddrisu, who begins to tell us about the man who founded this progressive pocket of Jamestown. With shoulder-grazing dreadlocks and well-manicured nails, Iddrisu seems tentative at first. Masculine-presenting and burly, his warm brown eyes are framed by the tiniest crow’s feet: evidence of a man who has smiled often in a lifetime that has aged him sooner than most.

“There’s a chief, Ayaata, who has a family home here, and he instils that discipline and [creates] the kind of community here where everybody who comes is not discriminated against... and he’s actually quite strict with it; you have to respect everyone here. He’s... developed that community and encouraged people to come here to feel free. To protect each other.”

“You know what?” says M3nsa, taking up the thread; “before we shot the video, it took us a while to decide which angle to take it in, whether we’re gonna find old friends of ours and people in the industry, or supporters, or to go on organically and use it as an opportunity to make a bigger, stronger statement. And, you know... I don’t think anything is more suitable than us finding this really special place.” 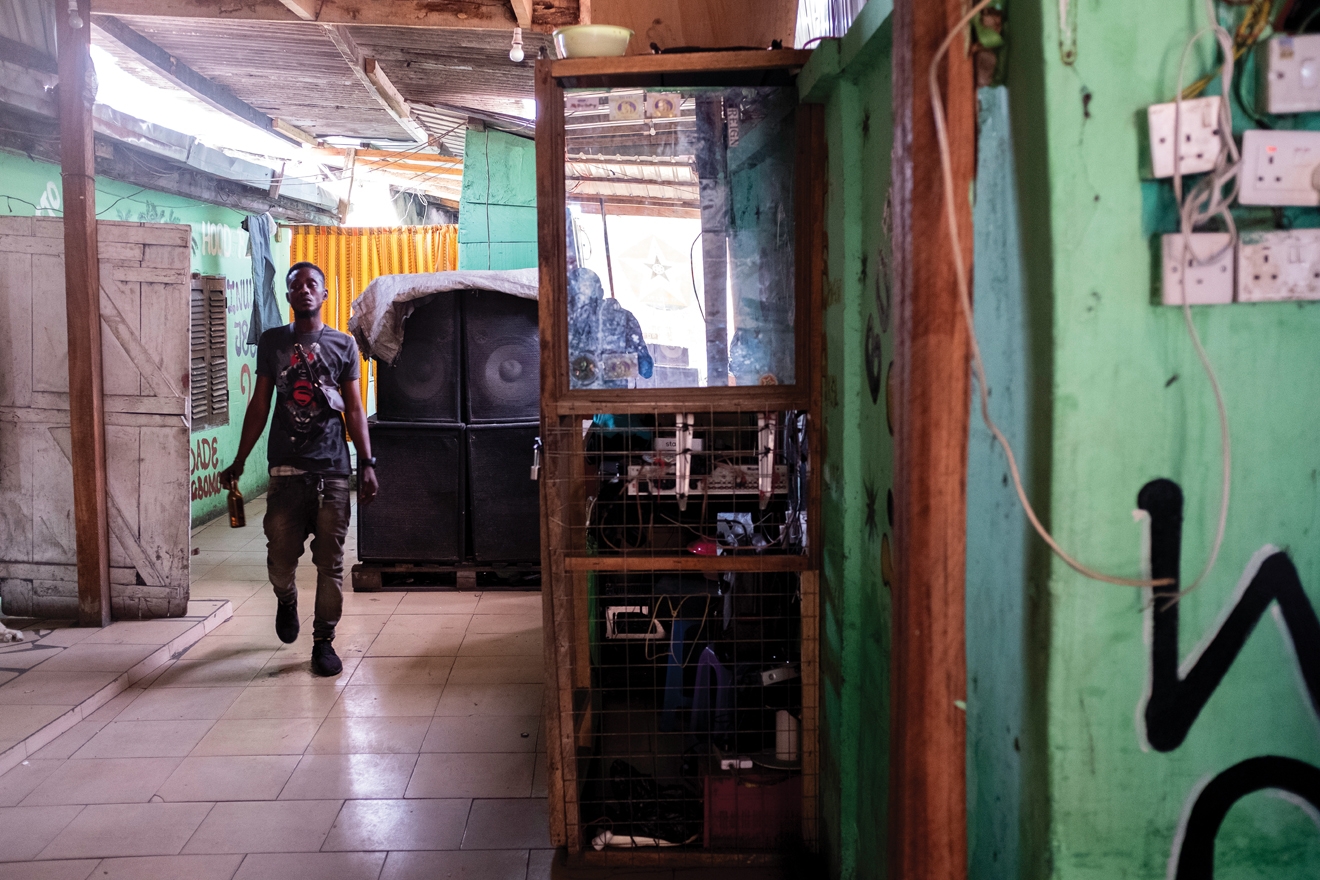 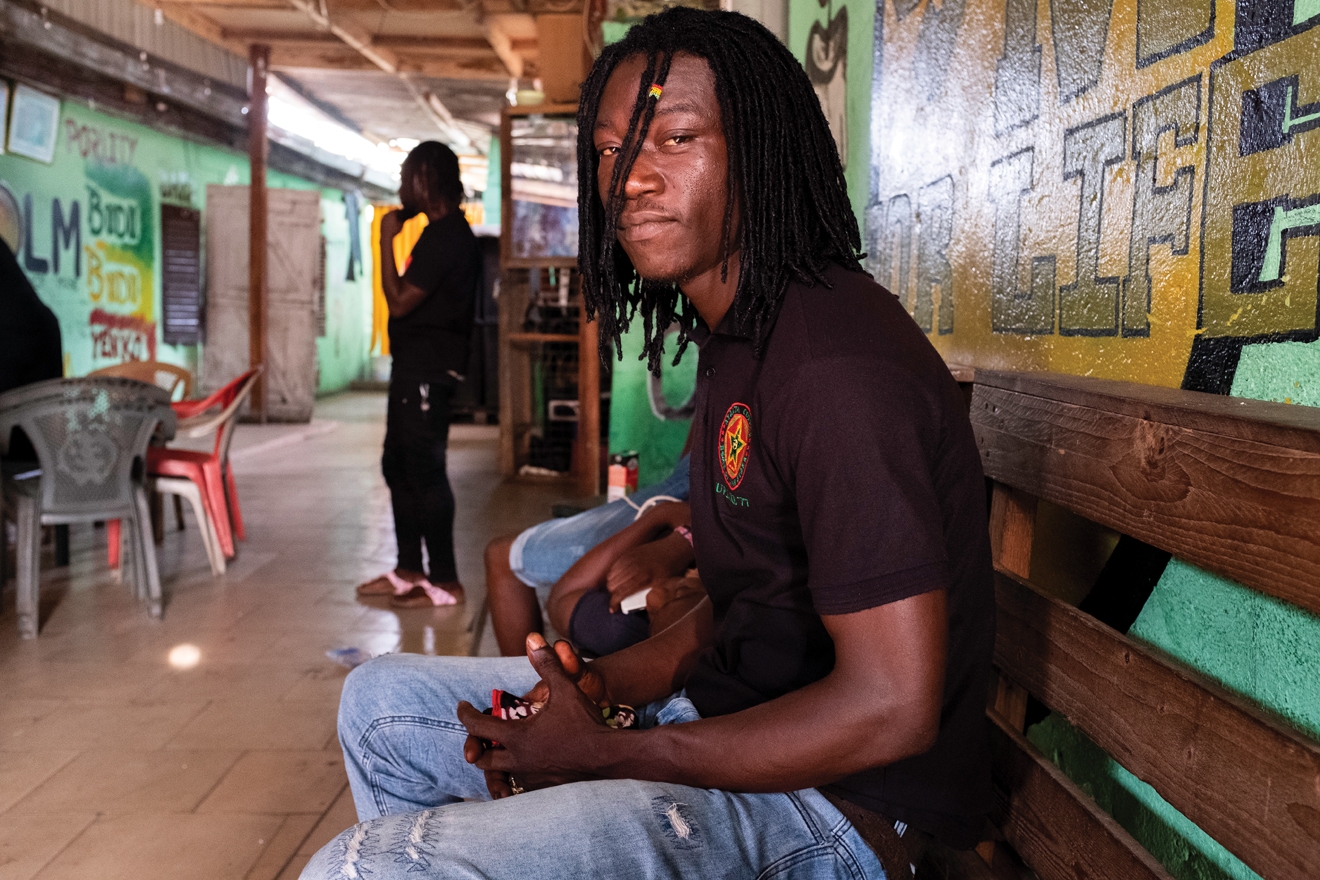 Every Sunday night Ayaata Corner becomes filled to capacity with poets, musicians and the like, sharing their minds and sounds in hopes of claiming their own spot among the performers whose pictures grace the walls hand-painted in green, red and gold. Although it’s still early in the day, men young and old sit in silence around a mounted television set, while others stretch out on wooden benches to drift away until the music rouses them for the evening’s performances. Due to limited space, only two hours are set aside for open mic before the space is vacated to prepare for the new week. The circular Adinkra symbol known as ‘Nyame Ye Ohene’ (meaning ‘God Is King’) is painted on the far wall. God is welcomed here – despite the violence toward the LGBTQIA+ community carried out in his name.

Read this next: In Bloom: Accra's explosive club scene is like nowhere else on Earth

“People here have created their own way because the government and external factors are not that trustworthy.” says Wanlov. “You can’t trust the system, so you trust your people more. Now, more people from communities all over Ghana are coming from different parts of the country to free themselves here. Out there, people are scattered – they don’t see a reason to stick their neck out for you. Here, people speak their minds, they don’t keep things inside.”

“You know,” M3nsa interjects, “even the language here has a reputation for being the most expressive [Ga, a branch of Kwasi, is one of 16 languages spoken in Ghana, and the Ga community is centred on Bukom]. Ghana over time has become very conservative. But there’s literally a description in Ga for every peculiar thing that you can think of. You’ll see people of all ages using words that the West have tried to convince us are vulgar. When someone switches from speaking Akan [spoken by 80 per cent of people in Southern Ghana] to Ga, their whole energy changes. It’s a language of freedom.” 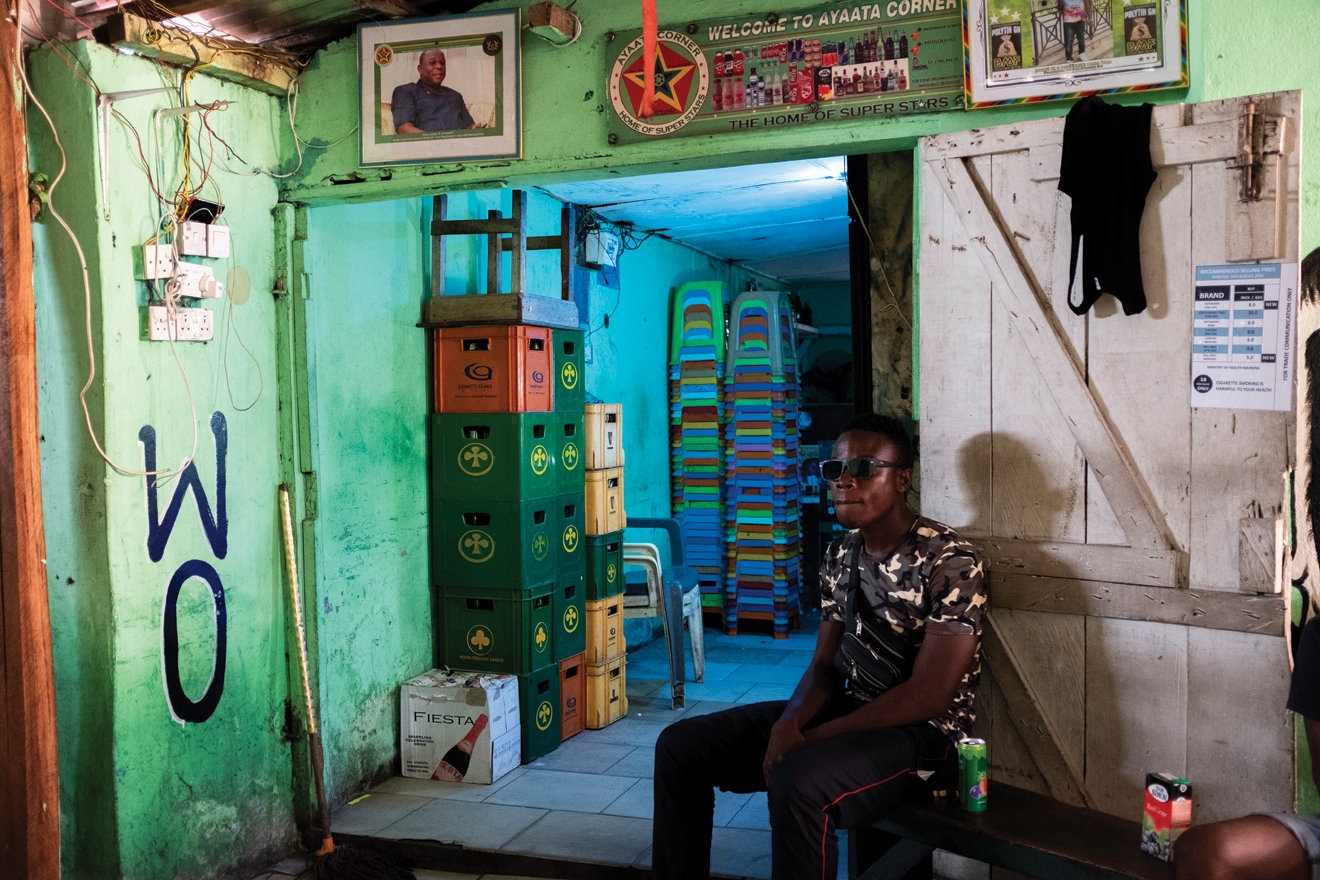 Given this exciting freedom of expression, and Ghana’s efforts to create its own future, the area is a spring of untapped cultural movements and new sources of inspiration. However, efforts to establish safe spaces need to be systematic and deliberate in order to establish a psychologically and physically free Ghana beyond the Year of Return.

Perhaps until Ghana liberates itself from colonial forms of othering, its people will never truly be whole. It’s fighters like FOKN BOIS, like Ayaata, who can make Ghana the oasis it once was for kin, for country, and perhaps, one day soon, for the queer.