We're celebrating the 30-year anniversary of the Summer Of Love. This classic feature explores Nude's roll in establishing The Haçienda as the heart of the acid house movement in Northern England

It’s 8pm on a Friday evening at Manchester’s Victoria station and the customary scenes of trains offloading some of the North’s more discerning clubbers are already starting to unfold. Arriving from as far away as Leeds, Middlesbrough, Blackpool, Birmingham and Nottingham to name but a few, these thrill-seekers all have one thing in common – their final destination is The Haçienda for Nude night.

The Nude night regulars’ initial journeys into Manchester are only the start. On arrival at the club they’ll join the local night-owls for the ritual of queuing for sometimes up to two hours before they finally gain admission – In fact, some have such devotion for the club that it’s not uncommon to find a 50-strong line of hopefuls still queuing at the door as late as 1am – one hour before the close! So what is the hidden attraction? The drinks are not particularly any cheaper than other nightclubs in the area, they don’t stage any special promotions or regularly entertain top name artistes and the venue itself is no more than a converted warehouse. So what is it that makes people go to such lengths to spend their Friday night in The Haçienda?

Nude has been in existence for over four years now which, for a club night of its kind, is an achievement in itself. But it hasn’t just survived, it’s got better and better with age. It was conceived by DJ Mike Pickering, who slid into the DJ booth as a last resort when the club was hitting hard times. “I’d done some DJing before in a club in Holland but really, I’m a trained musician and when I started at the Haç I was the bookings manager,” explains Pickering. “But because the DJs I’d employed were a little ahead of their time, they were only managing to attract about 200. It just struck me that I could do the job better myself.” The rest, as they say, is history. Within six weeks of starting Nude the crowds were back to capacity levels and it’s stayed that way ever since. 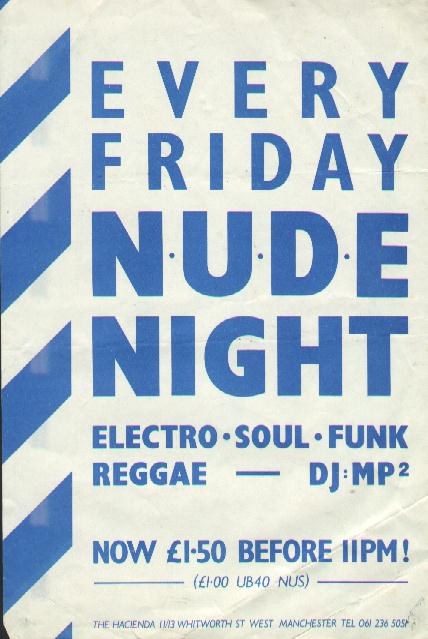 Nude has obviously seen several musical changes, but has predominantly been associated with house since the genre arrived from Chicago in 1986. Indeed, its reputation spread across the country for being the North’s leading house venue along with the Garage in Nottingham where another unlikely DJ was making a name for himself. Scot Graeme Park had accidentally found himself behind a pair of turntables when a friend opened a club and forgot to employ a DJ for the opening night. “I was only meant to fill in until he found a replacement but after a while, I realised I enjoyed it and started taking it seriously,” says Park.

Despite being constantly compared as DJs in various magazine articles, Pickering and Park never actually met until late 1987. Inevitably, though, they DJed on the same bill when the Northern House Revue called on them both. They instantly saw eye to eye. “It was a natural thing,“explains Mike. “The North was becoming more united anyway because the southern half of the country were doing their own thing with rare groove and rap, whilst up here, it was house. At the time I saw the whole house scene as the new Northern Soul. It was similar in that it was all upbeat,a lot of the records were obscure and also, crowds started to follow DJs from venue to venue.”

The mutual respect the two had eventually led to Mike inviting Graeme to share his throne (the DJ booth) every Friday night. Neither of them were sure that the partnership would work, but to the delight of the Nude dancefloor, it did. 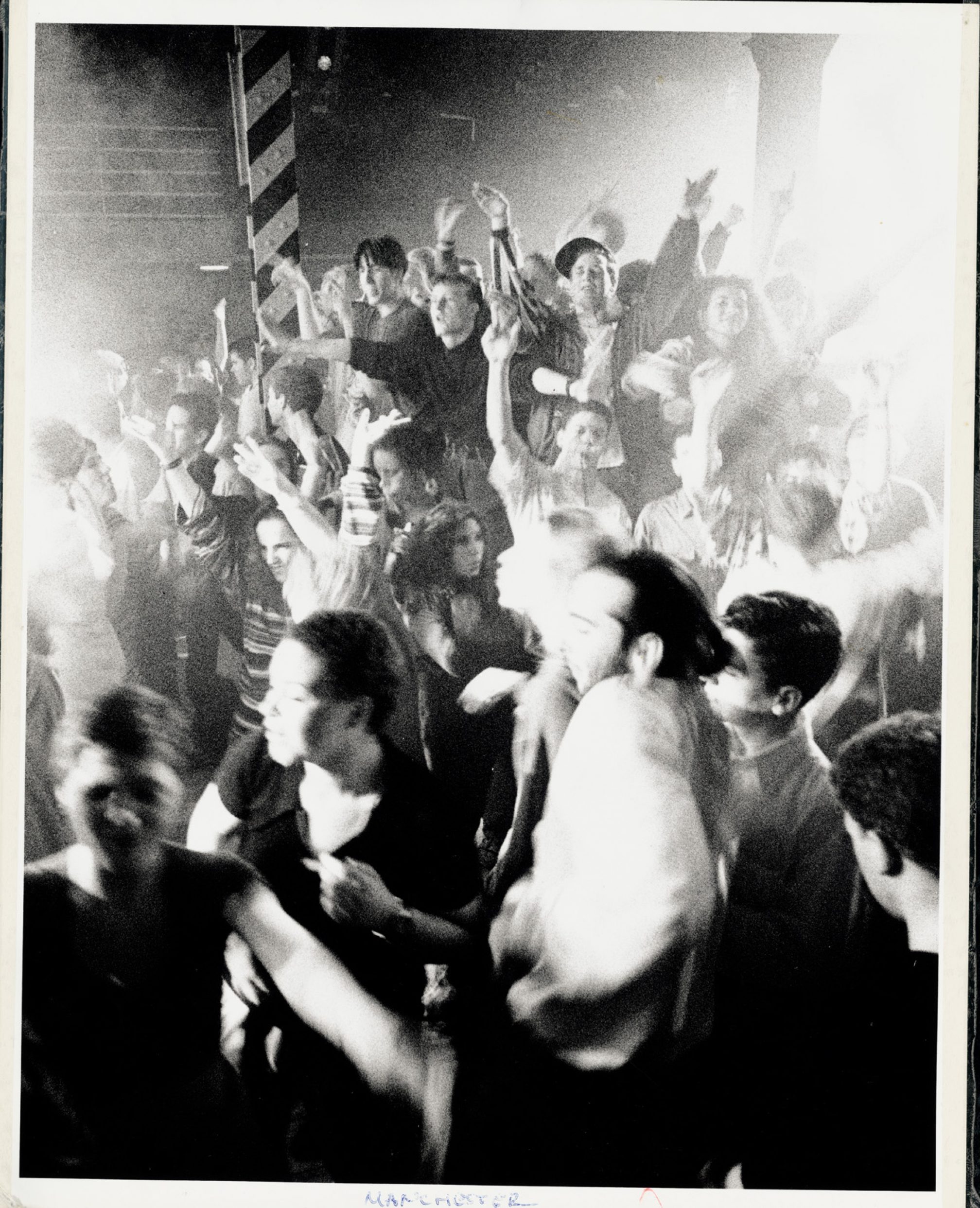 Today, Friday nights are still dominated by large doses of house beats but don’t be shocked to hear anything from Carly Simon’s ‘Why?’ to Sylvester’s ‘You Make Me Feel’ or some obscure Italian import. “We both have similar views on what music to play,” says Pickering. “There’s only two types of record – a good one and a bad one. We simply play what we want to.”

“We complement each other when we’re DJing because although people think we’re similar DJs, we’re actually quite different,” says Graeme. “Mike is very fast and furious with what he does whereas I put a lot more emphasis on running mixes. I think that’s why it works.”

Whatever the reasons, each and every Friday 1,200 clubbers treat the duo like demi-gods. To say that when Pickering raises his arms it provokes a cheer from the dancefloor wouldn’t be an exaggeration of the truth. As the night progresses the atmosphere reaches fever pitch, paving the way for crowd reactions that have to be seen to be believed when Nude night classics such as Oranges & Lemons’ ‘Dreams of Santa Anna’, Rhythim Is Rhythim’s ‘Strings Of Life’, Kechia Jenkins’ ‘I Need Somebody’ and T-Coy’s ‘Carino’ boom through the soundsystem. The latter is actually more than just a Haçienda classic as Pickering is a member of T-Coy. Indeed, both Mike and Graeme have various studio commitments in the remixing and production field and recently took their friendship further than the DJ booth by recording a track together under the pseudonym Dynasty of Two.

Graeme: “We’d both done studio work before. I’d done Groove’s ‘Submit To The Beat’ and remixes of Cash Money, Eric B, The Funky Worm etc, whilst Mike was involved with T-Coy and before that, Quango Quango. So it seemed the obvious thing to do to record some stuff together that would be a reflection of our DJing on a Friday night.” Dynasty Of Two’s ‘Stop This Thing’ was the result – the world’s first ‘Greenhouse’ record fusing ‘Save The World’ lyrics with that Chicagoan house sound. It hasn’t been their only studio work together either as recently they’ve also been engaged in a lot of remix work. Imagination’s classic ‘Just An Illusion’ and ABC’s ‘One Better World’ are just two tracks that have benefited from the duo’s dancefloor knowledge and there’s many more on the way too. Mike: “We still have to look hard for work but that’s a problem with the British record companies. A lot of them still use American remixers for marketing reasons because of their names, when actually most Britishguys could do a better job. It’s a snobbery thing.”

Whilst they wait for the British record companies to wake up, Mike and Graeme continue to perfect their profession. If you’d witnessed the crowd’s united screams for one more record at the end of Friday night session,you might say they’d already made it – but as Mike concludes: “If you’re at the top, it’s more of a challenge to stay there.”