Yes it's nearly over but not without pissing us off a little bit more with some glaring loopholes. Throughout the movie Carter is trying to create his killer track, his piece de resistance, the cut that's going to make him a star.

He sets about making it as different as possible by recording a heap of soundbites from everyday life. A zip unzipping, a coin spinning, the sounds of electricity overhead, a nail gun. All of these are used in "Carter's Killer Track" and as the end of the movie approaches we wonder where it will all fit into place. 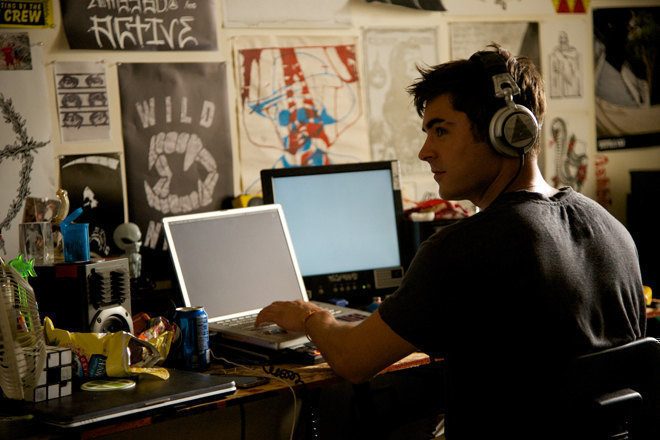 Carter finally gets his shot at the big open air festival at the end (meant to be HARD fest) and we're expecting a mammoth DJ set from him to close the film. Wait, he's not using the decks? Oh no, he's magicked a live set out of thin air. Midi keyboards, drum machines, live mixing. Where the fuck did that come from? He's spent the whole movie talking about DJing and now he's pulled a live set out of his fucking arse.

So he plays his "killer track" for about 3 minutes, the crowd goes bananas and that's it. What about the rest of the set? Did he only play one tune? Did he move onto the CDJs once he'd completed his perfectly executed live set? He might have just riffed for an hour with zips and coins. The point is we have no idea what happened that day, only that he smashed it.

We've been pretty cutting here but the point is If you want a gooey, mildly-entertaining, very occasionally funny American movie to watch, you might enjoy it. If you like EDM, you'll probably find something to take from it. But if you're sceptical about a film surrounding the, on the whole, bullshit phenomenon, then you'll hate it.

The music is pretty crap, the acting is stale and the idea that this rockstar lifestyle of girls, drinking, money, parties and drugs is a) easily attainable and b) the most glamorous thing on earth, is rubbish. It takes more than a laptop and a bit of talent to be a good DJ, one that's respected, genuinely talented and passionate about their craft. Unfortunately this film doesn't promote that and it certainly doesn't promote good music.