Just beyond the crest of The Social Festival’s outdoor stage in Mexico City looms a five-story car park, a cement behemoth which organisers have valiantly decorated with LED screens and billowing banners emblazoned with inspiring phrases like “Vibrations come from the soul and vibrations will never lie”. A blaring symphony of car alarms has erupted thanks to the combined rumbling of basslines from two nearby stages, but the crowd doesn’t seem to mind. The offbeat cacophony serves as a reminder that underground music thrives when it disobeys the rules, making sense of places and settings that were never meant to work.

On stage, soaking up the dying beams of the fast-approaching sunset is Bas Ibellini, who smiles as he fades into the entrancing rhythm of ‘The Hypnoticus II’, fiddling with his CD-J and abandoning a pile of records and turntables that refuse to cooperate due to the same vibrations that have set off car alarms a few stories above. Below the first level of the parking garage nestles the second festival stage, a dark, laser-drenched corner. Beneath cement beams and a ‘Salida’ sign is Damian Lazarus, swaying in and out of visibility as turquoise laser beams strike the dry ice shrouding his decks. 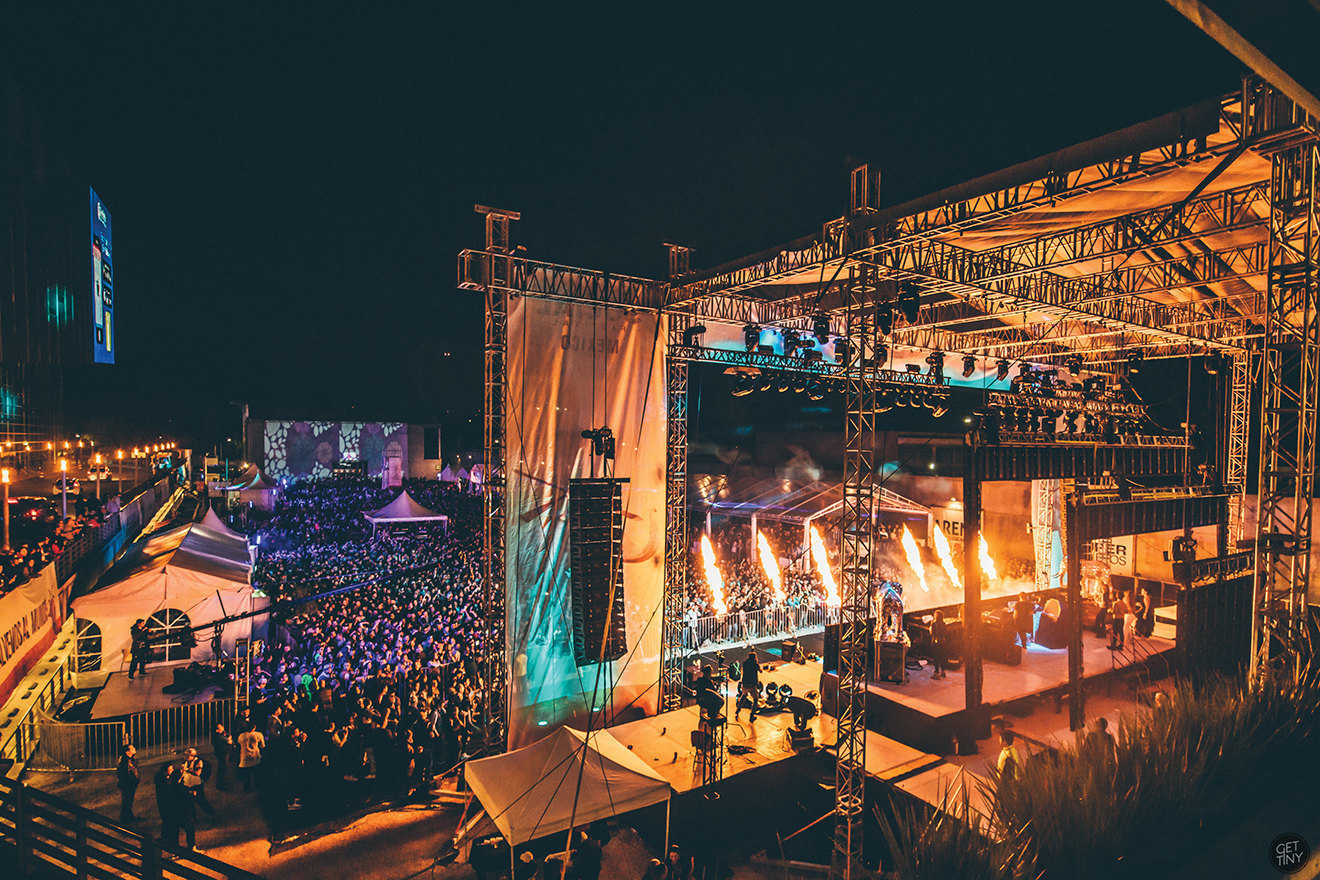 The Social Festival, brainchild of Nic Fanciulli and born and still rooted in the leafy suburbia of Maidstone in Kent, announced its impending international debut in Latin America ahead of its fifth year. With over a decade of experience playing in the diverse landscape of Latin America, Nic pushed for the festival’s expansion to reach not only one city on its debut weekend, but two, bringing it to both Mexico City and Bogotá, Colombia, for simultaneous events on the same weekend.

It’s not unusual for a successful festival brand to seek out new territories, but for The Social – and Nic himself – the choice to come to Latin America was a once-in-a-lifetime leap. To understand exactly how big a leap his Mexico and Colombia editions are, it’s necessary to look all the way back to the beginning of The Social, back to its humble beginnings in Maidstone, a town with a population of 75,000 people. (“It’s tiny – really fucking tiny,” Nic says). His original party nights were hosted in local pubs, capped at 1,000 people max despite having big names on board like Loco Dice, Tale Of Us, Dixon and of course, Nic himself. “The goal was never to grow a business from it. It was more like a passion project,” he says, despite the fact that The Social Festival’s fourth edition brought in over 28,000 people last year.

Without the backing of a major promoter, Nic has achieved what many major-scale festivals accidentally stumble upon: the creation of a special place that is almost solely the festival’s own. He lists Glastonbury, held in the relatively remote outskirts of Pilton, and Coachella, named after the desert valley in which it resides, as two prime examples of what he hopes The Social is doing for Maidstone. “What really hit home,” says Nic, “was when Carl Cox, one of my best friends, sat next to me at a press conference earlier here in Mexico City and turned to me and said, ‘It’s fucking amazing that I can hear Maidstone – which no-one knows about – in the same conversation as Mexico City.’ It doesn’t have to be [in] an amazing city; [a festival] just has to come from people who really love what they’re doing,” he says. 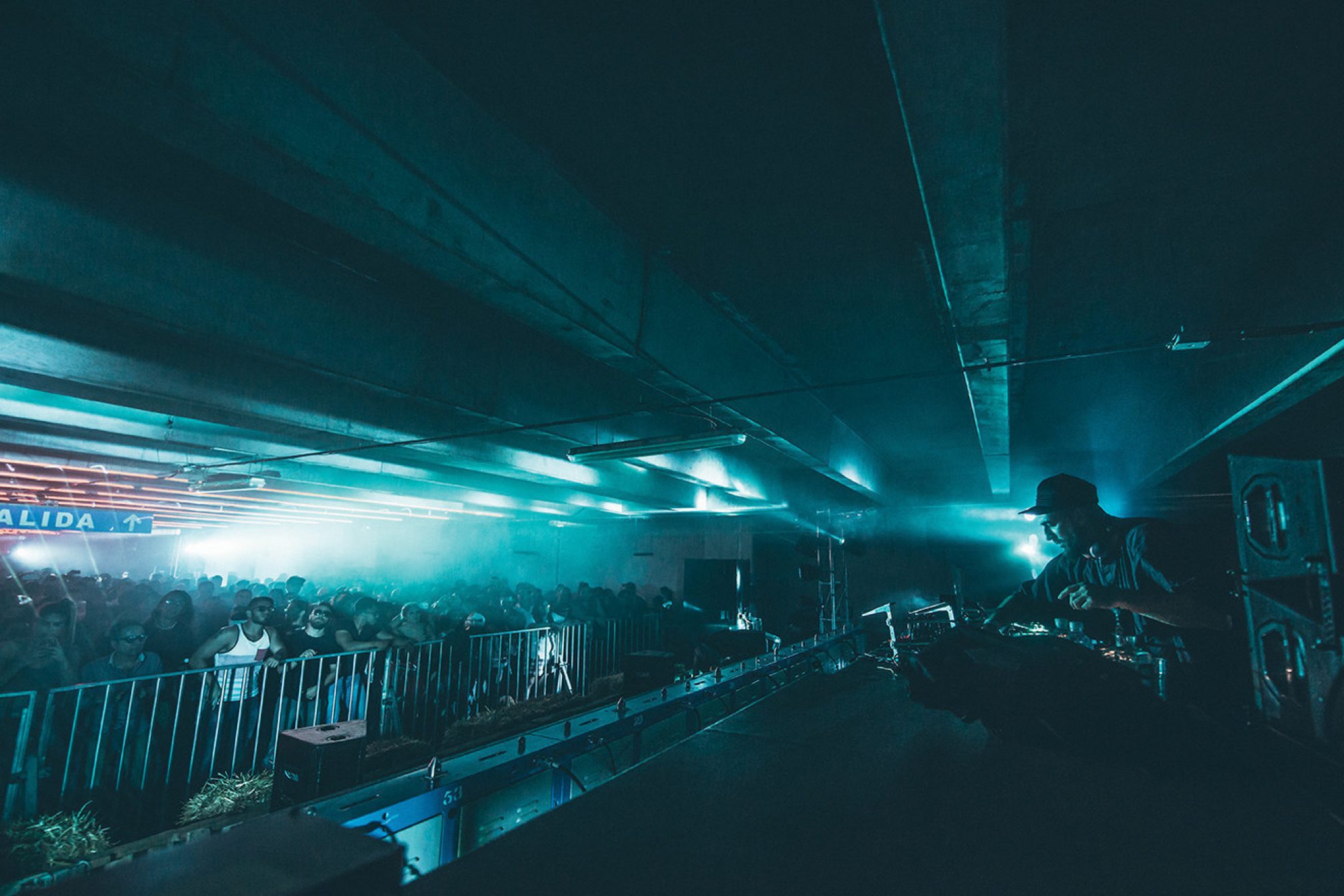 Today, he saunters up to the decks to take a peek at a crowd that looks very different than the ones that attend his English counterpart. But despite its geographical relocation, The Social Festival retains its ethos – even on foreign soil. “It’s a family thing,” he confirms, breaking into a grin as he names the team he’s brought from the UK to Mexico City and Bogotá on a whirlwind two-day tour route. He laughs, because he knows it’s an insane undertaking to oversee two festivals ongoing simultaneously in separate countries, each over 3,000 kilometres away.

But a tranquility exudes from Nic even in the most topsy-turvy of situations that’s impossible not to contract. He glides around the chaotic setting of the festival ground dressed simply in a black tee and a feather-patterned bomber jacket accented by stark white trainers, smiling warmly but also a little shyly when greeting his many DJ peers. Later, in a van filled with DJs – he calls it his “travelling circus” – his eyes drift to the jungle landscape that flits by, chiming in every once in a while to a conversation about delayed flights and artists in transit. Even on stage, as pyrotechnics explode from the stage in a dance of sorts with chilling dry ice blasts, he seems pretty tranquillo as he surveys the scene.


“From the first time I played here 10 years ago, I’ve had a love affair with Mexico. It’s hard for me to go back to Europe after South America, because the crowds here, they’re so good.” Mexico City is home to just under nine million people, and it’s a city that reminds you of it at every turn. People walk with purpose and speed, reminiscent of the streets of New York, but with unpaved cobblestones rather than sleek sidewalks beneath their feet and walkways lined with cart shops selling woven knick-knacks and fruit cups. Mixmag has just come off two hours of bumper-to-bumper traffic heading to the festival, a drive that’s meant to take no more than 20 minutes. But through it all, the city’s people embody a kind of collected energy in the day-to-day chaos of their daily lives. It’s becoming clear why Nic feels right at home.

Beyond its exotic backdrops and high populations, Latin America provides yet another staggeringly rare and vitally important factor for a thriving scene: a smart and passionate audience. “Every country has something, but here, they’ve all come for the music,” says Nic, extending his palm to indicate the crowd outside, behind the stage. Thanks to long, committed relationships with offbeat genres like psy-trance and techno, Latin American fans have proven themselves a wiser, louder and more eager group of fans in the global ranks. Young faces eagerly greet Nic and his cohorts with autograph and selfie requests. The local promoter says that it’s something he’s only ever seen for acts in the ‘superstar’ league like David Guetta or Tiësto. 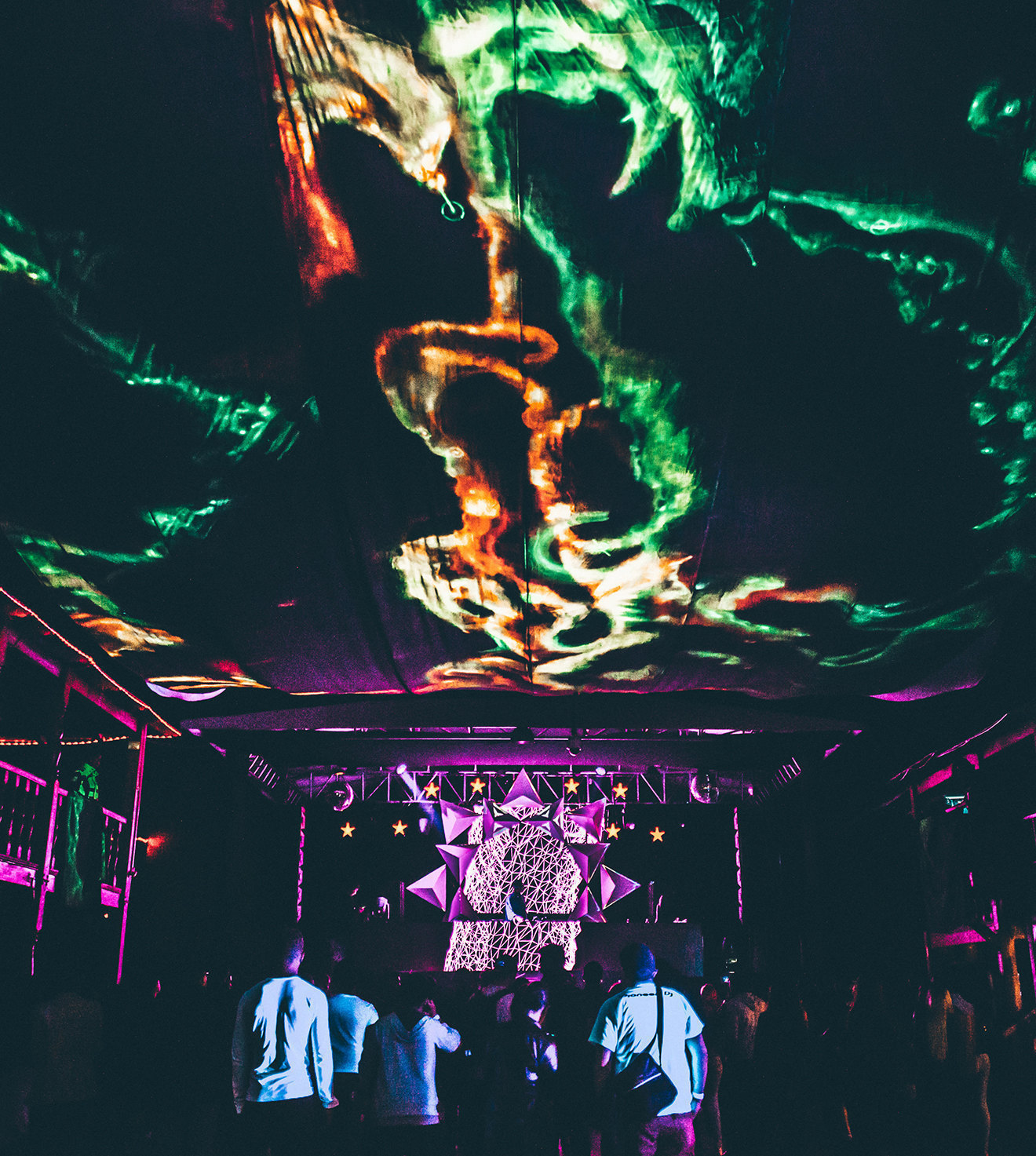 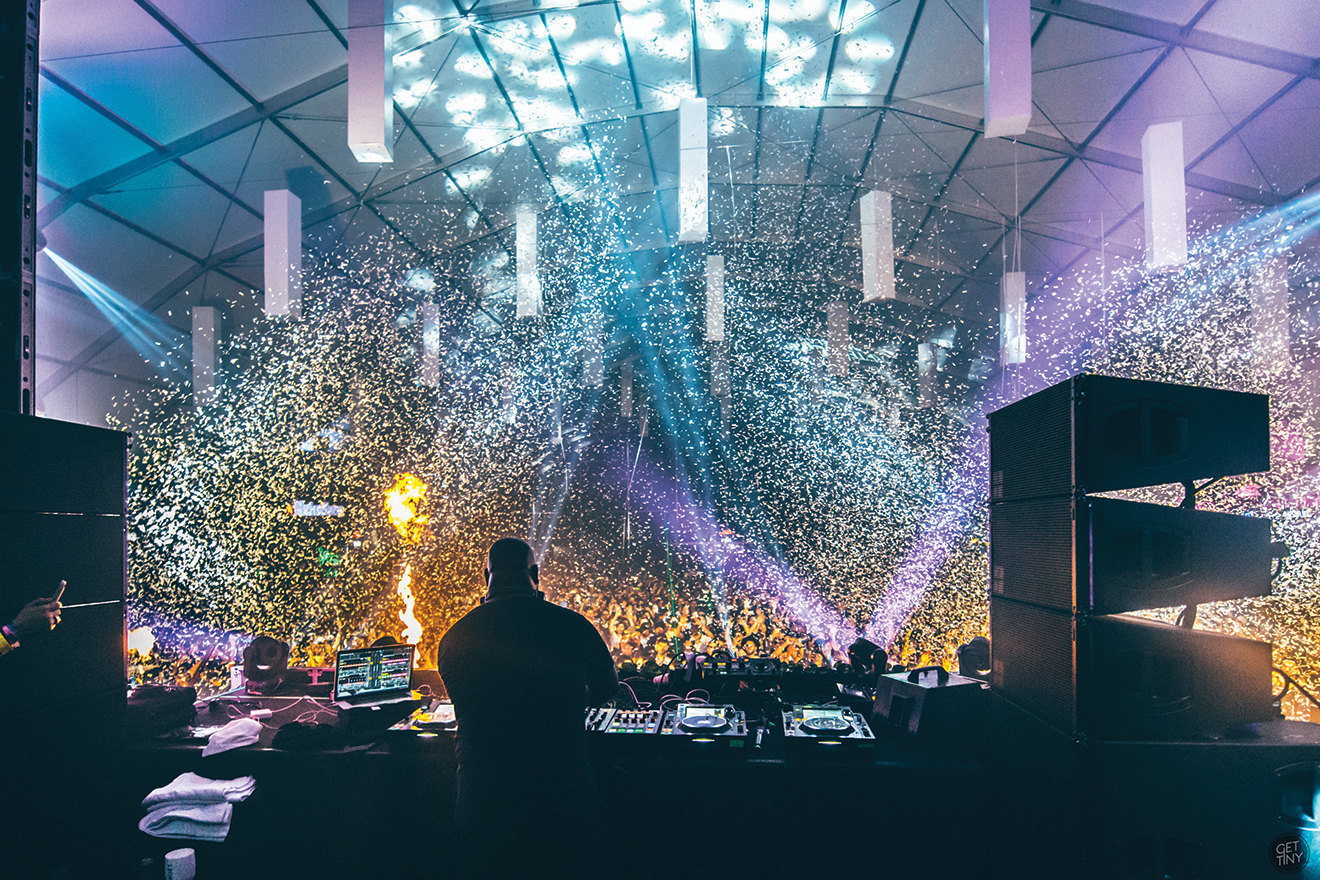 With a decade-long career that’s included a Grammy nomination, ownership of his prolific Saved Records and a keystone place b2b with Carl Cox on the bill for Space Ibiza’s closing, Fanciulli’s got nothing left to prove. What Nic prioritises in his career today, he says, is only what makes him truly happy.

The same sentiment is echoed by his friend, peer and fellow headliner, Carl Cox. “The production will be incredible, but what the people are really waiting in anticipation for is what they’re expecting from us,” he says, motioning to himself and Nic. Several metres away, the arena is electrified with a brewing energy as thousands patiently await the appearance of the one and only Intec boss – and he’s come prepared with a “tons of new music,” and flashing his familiar smile. “I come here to rock the house – no question!” he says.

Up until now, the crowd has been restrained; despite thoroughly enjoying sets from Hector, Paco Osuna and Nic himself all evening long, there’s a palpable new voltage as Fanciulli nears the end of his two-hour set. Eyes are craning over the decks, eager for the first glimpse of Carl Cox. He ascends to the decks and suddenly, it’s mayhem.

There’s nothing quite as infectious as a charming, gap-toothed Carl Cox grin, which is at its widest as he hops up to the decks, his smile seeming to beam even wider with every motion, soaking up the megawatts of energy from his audience around him, defying age, time and even gravity with his unceasing foot shuffle that matches every commanding techno beat perfectly: “Oh yes, oh yes!” Straight away the crowd is right there with him, every step of the way. 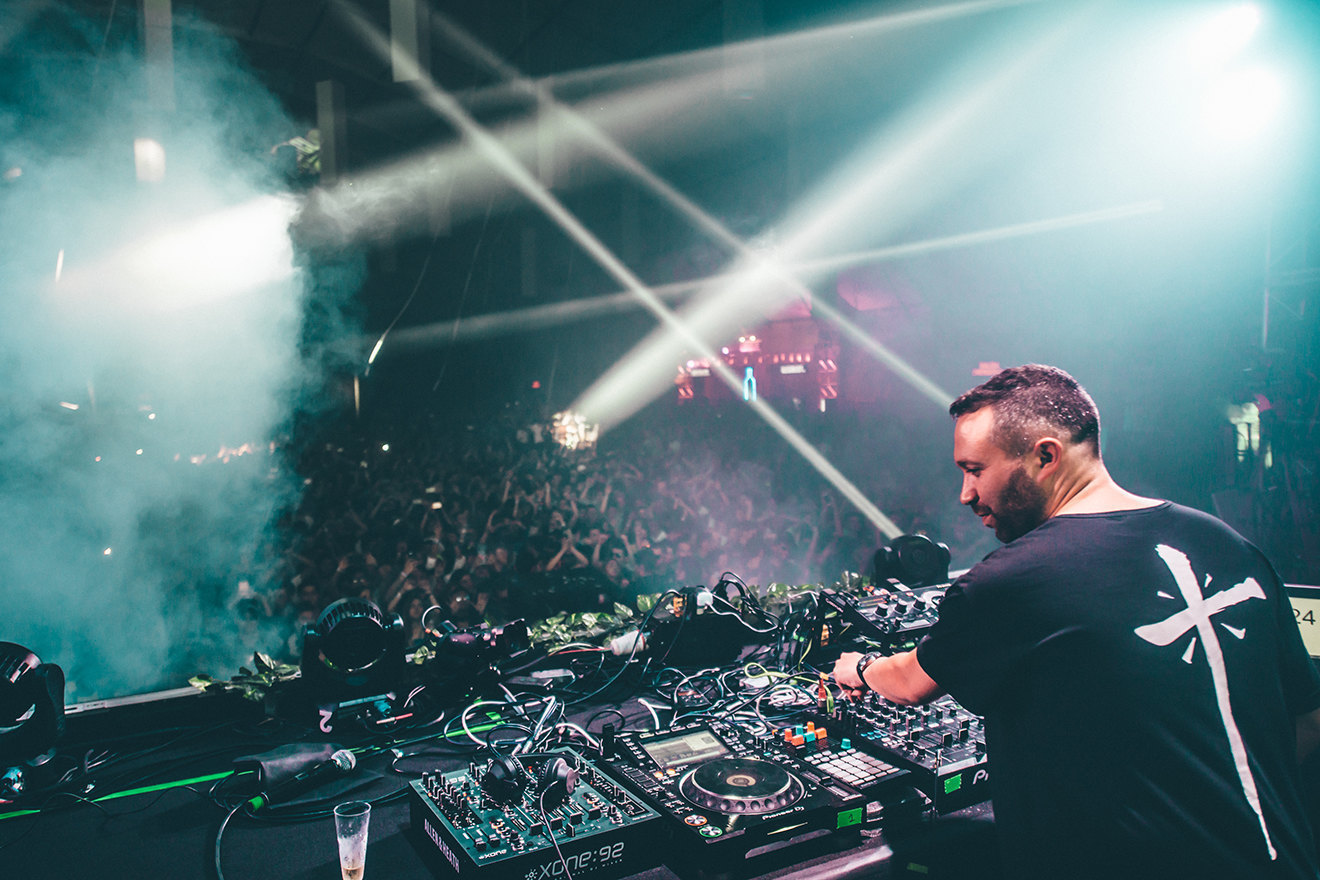 Less than 24 hours later, groggy from the combination of a late night and a 6am flight, Mixmag has touched down in Bogotá, Colombia with Nic and a gaggle of travelling DJs in tow. One face is more alert than the rest, typing rapidly on his iPhone and diving in and out of phone calls to make sure all the artists have arrived on time. Johnny Ospina is a Colombian native from the town of Medellín, and the man who single-handedly convinced Nic to take The Social abroad.

“When I played in Bogotá for the first time, four years ago, I met Johnny. He was badgering me to bring The Social to Latin America, but I was intent on getting it right in the UK first. Then last summer, he flew his whole team to Maidstone: ten Mexicans, ten Colombians,” Fanciulli laughs. “It was obvious: they seriously wanted to do it. I trusted him so much, I loved his integrity and I loved the fact that he wanted to make it organic and about the music. That was my passion, too.”

Johnny is the key to The Social Festival enigma in Latin America, proving a necessary link in the chain as he swiftly navigates the bumpy, cow-dotted country roads of Bogotá, guiding a driver in Spanish up to a rattling warehouse some 30 minutes away from the city centre. It begins to drizzle, but he never misses a beat, ushering the group into a massive rattling warehouse where the chill of the outside air dissipates, replaced now by the heat of several thousand bodies moving to the swinging beat of Pelle & Shawnecy’s ‘99 Problems’. 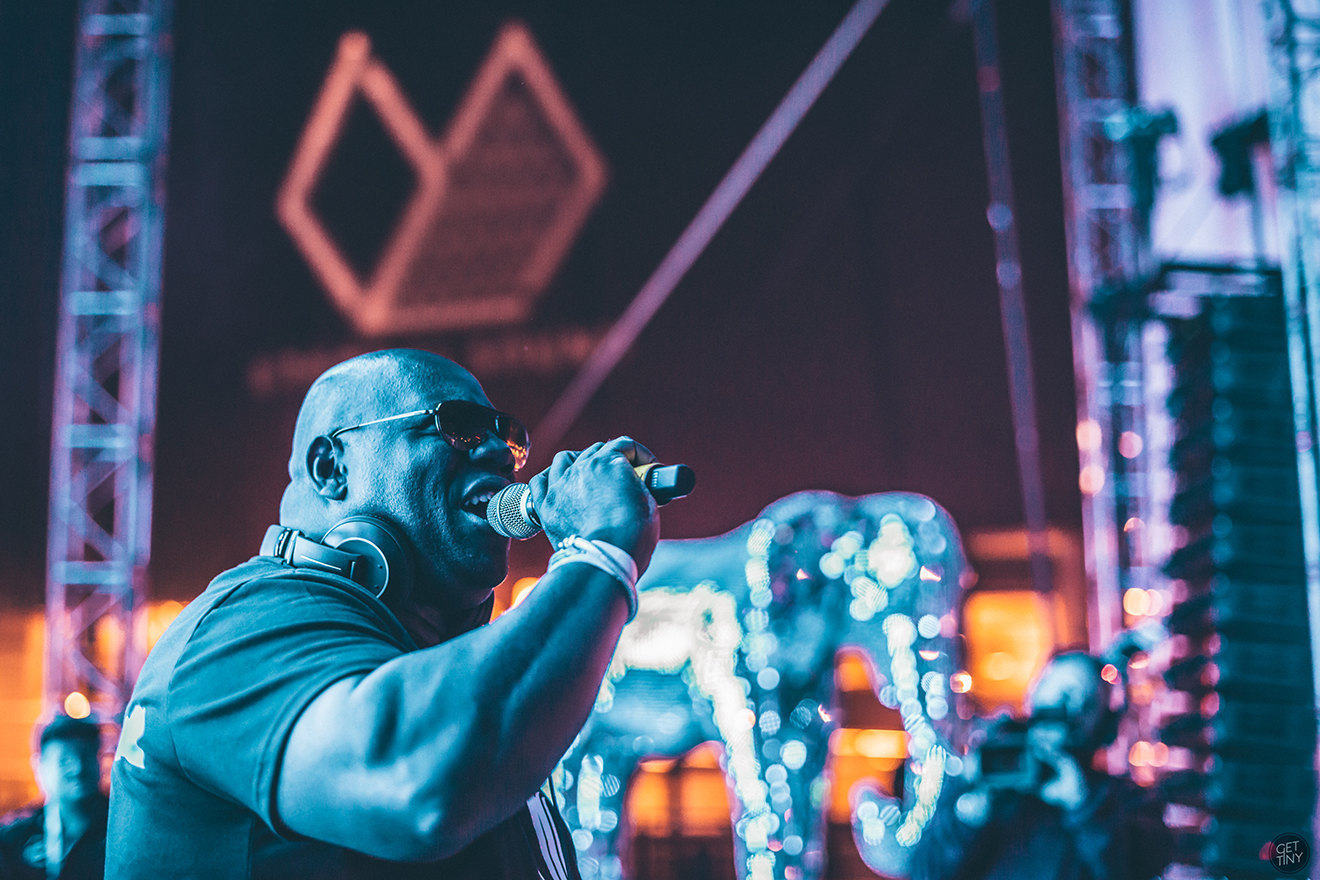 “A year ago to this day I sat with Nic in Miami and told him, ‘We are doing this’,” Ospina says with a conviction that rattles as hard as the bass in the warehouse walls. Involved in the nightlife scene since age 16, he summarises a long history coming up, then down, then up again as a DJ and promoter in Colombia and in Mexico. After experiencing a rock-bottom moment losing everything he owned investing in a failing nightclub he experienced an “awakening”, as he calls it, focused not on the money, but instead, on the music and its power. He mentions the banners hung up around The Social Festival in Mexico City, adorned with a variety of inspiring messages.“We have an opportunity to reach people at their highest highs as they feel the magic of these events. Maybe they’ll read a banner that says ‘Imagine what 7 billion humans can accomplish if we all love and respect each other’ – and boom, it’ll spark something. Even if that’s just in one mind, then it’s worth it.”

For Nic, Johnny represents a wave of positivity that is impossible to ignore, even on a global scale. What Latin America offers artists is a unique opportunity to break new ground with an audience that feels like an old friend. “This is our new era,” Cox says; “we’re able to experiment here.” “They’re a very patient crowd,” Nic agrees. “They won’t leave the dancefloor – they stay with you. That’s so important to me. It helps me be creative.”

At the top of a precarious staircase, Carl arrives at his second booth in 24 hours, this time several thousand kilometres and a few borders away from the last. He dives straight into a rolling tsunami of techno, even harder than his usual, playing into the setting. Lasers fire off in every direction and the sound is clapping back off the warehouse’s aluminum walls. One hour in, water begins to drip inside, a combination of rainwater leaking in from the outside and condensation from the sweaty audience. A confetti cannon booms as Carl Cox twists into one final, driving lift before fading out and putting one hand up to wave goodbye to Bogotá down below.

The Social Festival returns to Maidstone on September 29

This feature appears in the July 2017 issue of Mixmag