Last night the venue was called Cave. Tonight, it literally is a cave. The crowd is different: button shirts, dresses, mojitos and Champagne. The Italian Instagram elite. The warm-up act’s done an admirable job of moving into chunky techno, but there’s tension in the booth. Ben got an Allen & Heath mixer in the end, but there are low-end issues and not quite the usual screams as Ben takes the decks. There is, however, a nonchalant rolling of shoulders across the crowd. Following Ben’s usual 20-minute ascent through driving techno, the seatbelt signs go off and tonight he goes deep, referencing soul and dropping Floorplan’s ‘Never Grow Old’. This works – big time. Ben turns, grins, grabs the Champagne. “Fuck it! Let’s drink!”.

The crowd get more into it the deeper Ben goes. Slowly, he teases the agenda of the night’s trajectory back to familiar straight-up territory, the crowd willingly, or unwittingly, following. In customary Italian style, the night ‘ends’ 25 minutes earlier, allowing Ben ample time to play a string of extra tunes to a crowd now chanting a football style song that translates as... “They’re not fucking leaving. That’s what it means. Sometimes they sing it from midnight onwards,” yells promoter Mirko in the booth.

We’re at an afterparty in an all-night cafe. We’re introduced to the concept of vodka shots inside pints of beer. “Even the Scotsman’s shocked!” laughs Ben. Mirko has had a fallout with his girlfriend. Cue Ben making a heartfelt video plea on Mirko’s phone for forgiveness. Ben looks knackered, though relaxed. Mixmag has designs on bed. But it’s the day off tomorrow, and Mirko has other plans.

We’re reunited. Ben had 24 hours off, and a set in Ancona. “The beach stage was at a weird angle. But it was pretty cool.” That’s all you’re gonna get, folks. We were in Berlin for 36 hours, of which 28 were spent champing at the bit, waiting to get back on tour. “Tour is a drug. You missed the constant adrenaline, right?” “Perhaps,” we respond, repressing memories of shots, pints, bar crawls with strangers and attempted fights with terrified Canadian students. We’re starting to understand why some DJs lose it.

We’re back in the groove now, sitting behind a curtain on the main stage, consuming ginger tea and apples. Ben rapidly goes through some last minute tweaks as the warm-up act thrums out 132bpm kicks that shake the curtain. There’s that pre-match sense of anticipation now that’s become a familiar rush, a craving. Ben heads through the curtain and sets up shop: steel record box (his only luggage for the whole trip) down on the left. Bottle of Champagne and regulation single glass, lucky towel beside decks. It’s a close, indoor venue and Ben opens hard, rising on kicks and bassy builds before easing into the techno cruise just after midnight, his expansive, shuddering basslines reverberating in the markedly colder Finnish air – despite the heat of the tent. The rows of blue lasers make a dizzying rash of little pinpricks on the crowd. It dawns on Mixmag that DJs never see the floor, the lights, the booth the same way the crowd do. Different frequencies. The crowd sort of bounces on the spot, looking aggressively sober in contrast to the stage-invading, tattooed Italians of previous nights. “They’re into it, they’re just Finnish,” someone backstage tells me. The set ends with polite clapping and a solitary “Thank you, Ben!” from the back of the room. Must be the temperature.

“I go through phases,” Ben tells Mixmag as we make our way through the hotel we’re staying in, carrying some €16 takeaway pizzas with us. “Sometimes when I play I like to be sociable, and other times I like to get into my Jeff Mills vibe – no distractions, just music. Then, at other times, I just sort of play.” 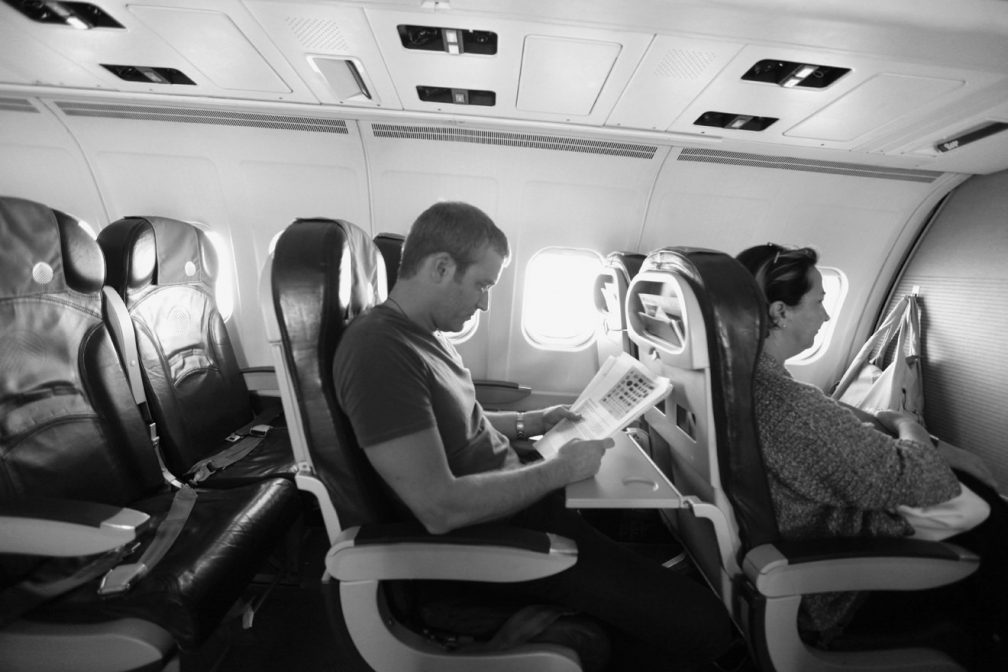 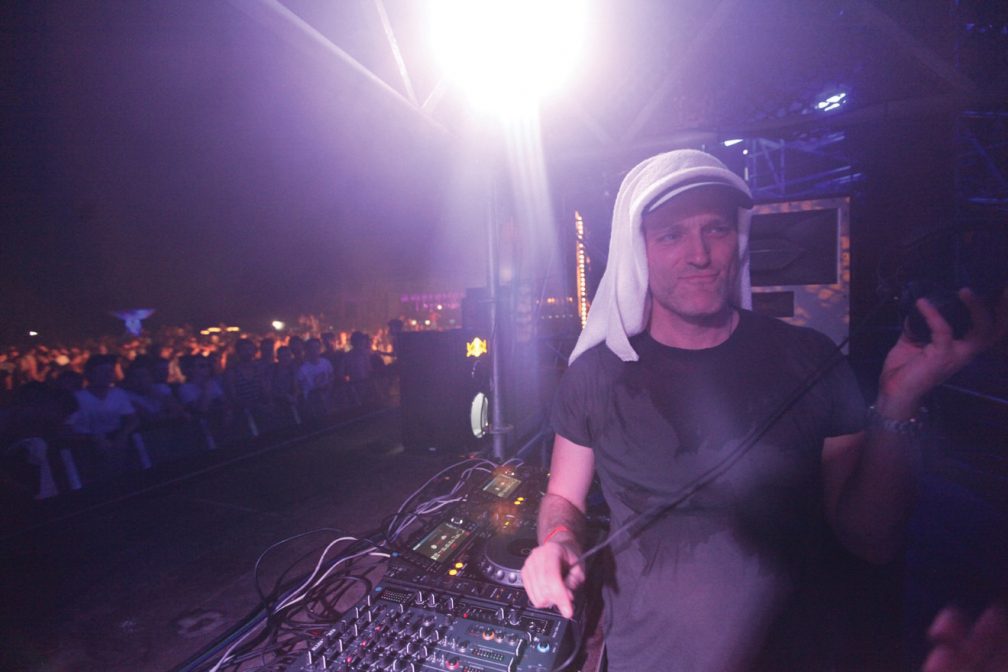 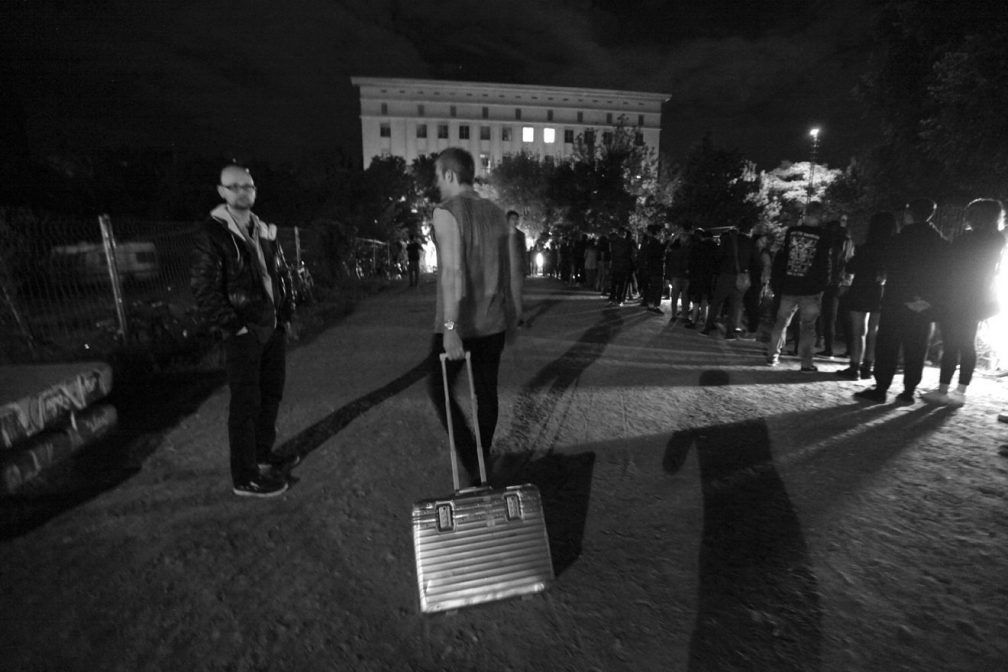 Following a fascinating tour of Barcelona’s reclaimed industrial sector via a lost golf buggy, we arrive backstage at DGTL. Acclimatisation complete: Home is now wherever there are downlights and several thousand people 20 feet away. We reconnect with Marcel’s group. There’s a moment where Marcel and Ben are teasing each other, swapping cigs and hiding each other’s booze while the two tour managers give each other tired smiles like parents watching their little stars.

“I like DGTL because of the low setting. The booth is pretty much at ground level,” Ben says. He winds up at 00:44 and you can feel the raised intensity: smoke and lasers from the crowd hitting the stage too, eye contact with individuals, heat. Ben wipes sweat with his lucky towel and an enterprising Spaniard sees an oppurtunity, launching a bedroom-label T-shirt into the booth. Ben laughs, picks it up, looks at it, nods and places it in his record box. High-fives in the crowd. There’s a sense of the end of the tour already: Ben’s playing harder tunes earlier. Smoking a bit, moving off the decks to bro-hug people backstage. There’s a crew of maybe 25 people in the booth, enterprising groupies, opportunistic tour managers and tactically quiet PRs. There’s a tidal movement toward the booze table whenever the dedicated security moves off.

At 02:53 Ben Klock drops the Carl Craig remix of Junior Boys ‘Like A Child’ to a crowd bathed in blue light and thrumming the barriers. The set ends in a blaze of yells out front and downed shots backstage. Goodbyes over, Ben beats a tactical retreat across the concrete expanse toward the hotel, flanked by Randy and Mixmag, trying and mostly succeeding to avoid kidnap by roaming groups of selfie-hunters.

Mixmag is standing with Randy a little way off from an around-the-block queue for Berghain. There’s a steady stream of rejections passing by. Eventually a black BMW with ‘BEN’ on the registration plate pulls in. Ben gets out. Three hours’ sleep since DGTL: 2 in Barcelona; one here. We move to the front of the queue and reach the door. We’re waved through and Ben looks back, gives us a nod and a grin, then disappears through a side entrance as we’re left to navigate security.

We’re in the main room at Berghain, for the Ostgut Ton night. Marcel’s kicking 108db, according to the digital read-out in the booth. The air is hot and misty with sweat. The space feels close despite the towering ceiling. There’s sparse lighting, and periods of pitch black punctuated by two tracing white lights and some thin red lasers. Aged and futuristic, all at once. The candlelit bar has a row of Macedonian shields along one wall. Ancient democracy. You’re in charge now. You sure you’re ready? Back in the booth a barman ceremonially brings Ben a single ginger tea.

Ben looks different. It all makes sense: the cut off T-shirt, the fitted jeans, the enigmatic, ever friendly, ever distracted presence clicks neatly into Berghain. He hasn’t so much stood into the booth as plugged himself in. There’s a relaxing of shoulders, something akin to a professional safebreaker feeling his way to pick the pins of a lock with consummate ease. Ben moves in at 114db and the club reacts, albeit subtly. The temperature noticeably rises, the crowd move that bit faster, the white spaceship-like scanning lights increase their pace.

For the past 10 days, Mixmag has shadowed Ben. It seems to us that touring DJs never really leave the booth, physically or mentally. All over Europe, all over the world, it’s the same artificial horizon, the same cool blue read-out of waveforms, loops, tempos and levels below, and a variety of shifting people, languages and sunrises above. Touring isn’t really about moving country to country. It’s time travel, standing in the booth while all around you the cities and scenery changes. After a while, ‘out there’ seems so foreign, so unusual, that solace can be found only in a pair of hot downlights, in a headphone cue or in your record box always being by your left leg. Our day off was miserable. We were itching to get back on tour.

It’s the knowledge that you’d drop any relationship, any job, any commitment to chase that fever dream. Not for the fame
or the money. The afterparties aren’t glamorous, they’re just decompression. It’s about the relentless momentum, a force behind you pushing you uphill, a high constantly being chased. And sometimes, the tiniest sensation that this isn’t real life. This isn’t actually how it works. Outside there’s this slipstream called reality, but you’re cocooned from it in this booth. For many DJs, it plays itself out on social media via bizarre rants, or weird attachments to esoteric causes. Most, though, are too busy chasing a life so in line with the rapid simplicity of the music they play to even notice any more.

But with Ben Klock there’s another universal, one that goes well beyond DJing as a lifestyle. Whether he’s playing a cave in Italy or a festival in Serbia, whether he’s just off a plane after a few minutes’ sleep or has just rolled out of his own bed and around the corner to Berghain, there’s something happening that goes beyond technical virtuosity, beyond name recognition or hype, beyond the current vogue for one genre of dance music or another. When this enigmatic, sometimes aloof character gets behind the decks, he makes a genuine connection with the people on the dancefloor – whether they’re ecstatic Spaniards or reserved Finns. It’s something that many DJs aspire to, and few consistently achieve. It’s been a privilege to see it up close. A punishing, exhausting, perception-altering privilege.

The set ends, and Ben hops out of the booth. Mixmag follows, but pauses, watching him drift off. This is our stop, we decide. He is absorbed into the crowd, decompressing. There are 18 agonising hours until DC10 Ibiza. Until the next set, the next high, the next booth.