Mixmag comes to in the back of a hot Mercedes. We must have nodded off. We only had 40 minutes sleep at the hotel. The tour manager, Randy, sits in the front, remonstrating with an impatient driver. We’re in Sicily. Probably. The hotel is just 10 minutes from the airport. However, our flight to Amsterdam is in 44 minutes. With 39 to go, Ben Klock appears, the same way he always does – just in time, and in sunglasses, T-shirt and dark grey jeans despite it being 38 degrees. He gets in and the taxi screams off, weaving through traffic and cutting lanes, while we get into our roles. Randy, doing online check-ins and gate checks with military efficiency; Ben on a different frequency, trying to work out the final dynamics for a set on the other side of Europe in eight hours’ time; and Mixmag, blinking blearily, trying to get everything we see down on our phone.

It’s day five of Ben Klock’s tour. Ten sets in 10 days.Bringing a journalist along was actually his idea. The enigmatic Berlin-based DJ personifies the pinnacle of underground philosophy: he recognises the curiosity about his life and work, but hates doing interviews. On this trip, then, he requested a ‘shadow’ instead. For the benefit of any readers not currently in the interesting headspace between pissed, hungover, adrenaline-fuelled and sleep deprived, we’d best start from the very beginning.

The flight to Belgrade is delayed by 15 minutes. The queue has disintegrated. Towards the back of the gate, two men, all in black, sit at a table. One looks intently at his smartphone. One sits on a steel record box, with a laptop.

“Stressed-out DJ in an airport? You must be Ben Klock.”

Ben turns to look at Mixmag with amused bewilderment. It dawns on us, facing the two individuals dressed in regulation funeral/techno attire, that the beach shorts and white tee look probably doesn’t blend. The tour manager, introducing himself as Randy, takes one look at our chunky bag, and audibly groans.

“One bit of advice. Don’t drink too much. It’ll catch up with you,” he says. Ben then pulls out a series of tiny glass bottles. “Ginger tea. Imported. Keeps you awake, without all the caffeine and stuff. On tour you’re not a DJ, you’re an athlete.”

With that, the pair silently rise from their seats and queue-jump masterfully through the gate. Mixmag joins the back of the line. So, this is going…. well.

“On me. Head down, pass ready, look like you do this all the time.” With Randy’s coaching we miraculously jump every queue, pacing along in Ben’s priority-pass slipstream. We end up in a car park. “Phones charged? Good. Gig’s in two and a half hours. Journey takes three.”

Randy switches off like a light. Up front Ben is hunched over a laptop, playing 10-second loops off against each other in Rekordbox. “You prepping for the set?” we ask. “Oh no – this one I know what I’m doing. This is for Dekmantel in a few days’ time.” Ben looks at me, grins. “Hey. Sleep whenever you can.” 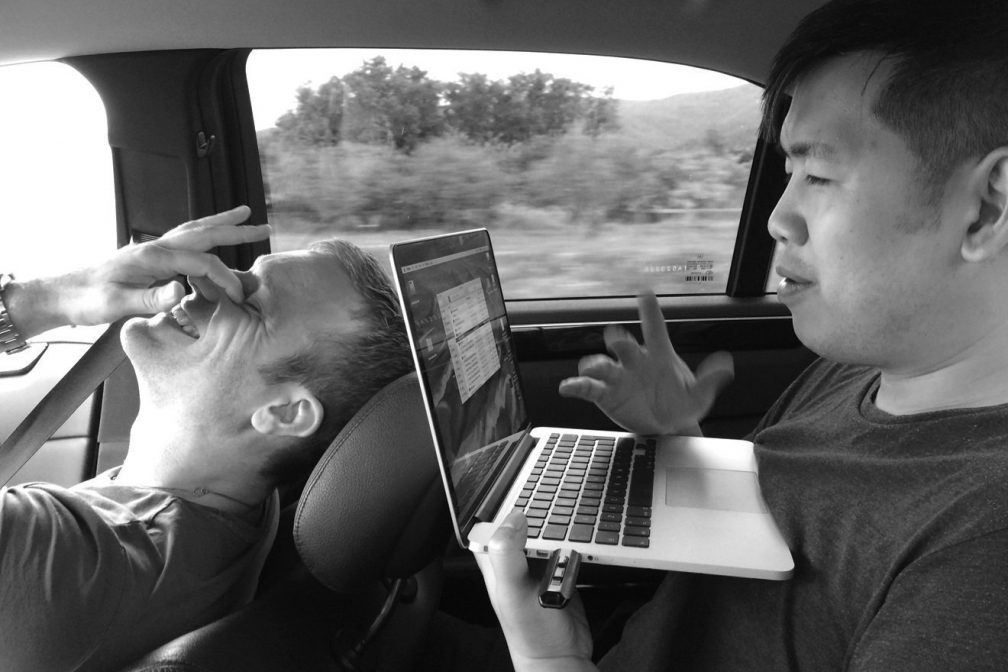 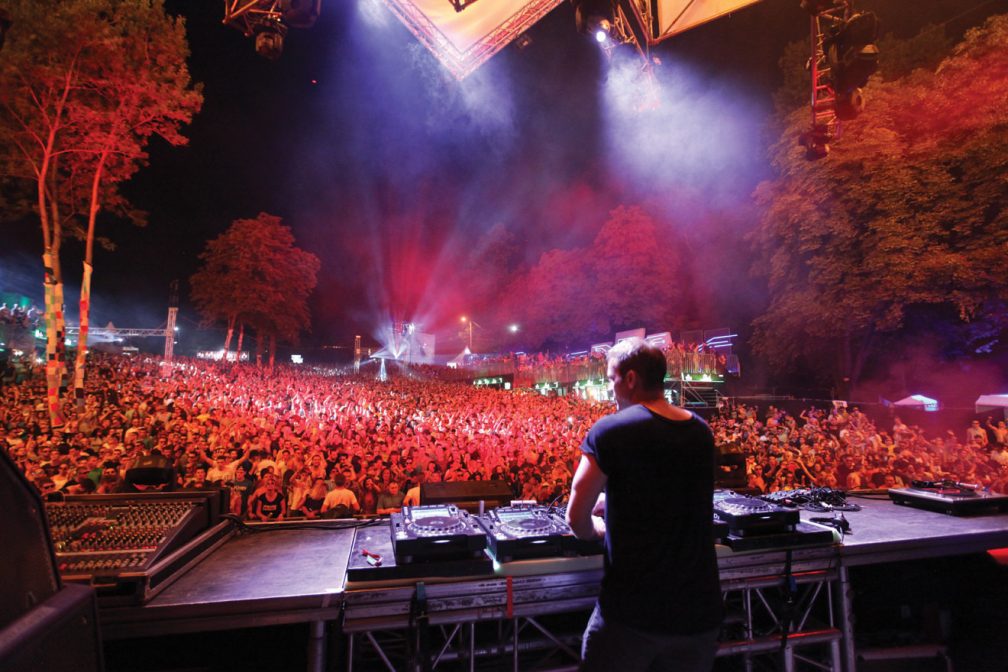 Mixmag is awakened by a wall of sound thrumming off the side of our door. The car’s bouncing over some sort of a field. Bleary, we blink and open the door to hot cigarette smoke and scowling giants. Serbia. “You slept? Good stuff!” says Ben, picking up his steel case and tearing off, Randy and I running to catch up. A promoter joins us mid-flight and ties wristbands to us on the move. “You’re on in six minutes, Ben,” an Eastern European accent says from somewhere.

There’s a sudden sense of vertigo as we hit the main stage. Perhaps 10,000 people are packed into a sloping hill ahead of us. Ellen Allien winds down a blasting techno kick until there’s silence and uplights. There’s a roar, then a hush from the crowd as Ben starts. Sub-bass becomes a kick, becomes a melody, becomes a percussion hook as Ben’s set, Ben’s tour, roars into life. The sides of the stage crush with VIPs and the crowd below surges more than dances. Ben drops James Ruskin & DVS1’s ‘Page 1’, which, between the black booth we’re in, the lit crowd below us and dawn over the horizon, adds to the other-worldly element of it all. The sense of heated descent increases as Ben’s machine-like set continues to wind up. Snares and hi-hats float over the top of shimmering risers. An ever-present kick nudges slowly up until it’s tracing into the 130 bpms. Five hours ago we were in Frankfurt Airport…

“I mean, there’s no toilet door. It’s basically a minicab with wings.”

We’re in a transfer car on the way back to Belgrade airport, and we’re discussing the not-so-glamorous realities of what happens when you need the loo on a private jet. We’re jacked on espressos, we’ve had no food and only two hours of sleep, and there’s a lot of high spirits. Ben is visibly more relaxed now that the first set is over. By not sleeping in, not holding anyone up, Mixmag feels as though we’ve passed some kind of vital test, and the conversation can start. Both Ben and Randy have got their laptops out, comparing video and photo footage shot by Randy last night – in addition to being Ben’s tour manager, he’s also the official photographer for both him and his Klockwork label.

“It’s a challenge that we do actively think about: how to stay ’underground’, I suppose, while still making sure we’re getting the coverage,” Randy says.

“There isn’t a hardest part about touring,” Ben is explaining. “Touring is the hardest part. But you do end up having lots of little homes. One hotel you like, or one restaurant you love. Like this one, for instance.” We’ve just spent 25 minutes doing laps of Rome Fiumicino airport to find this one deli. But, as Mixmag devours Mozzarella and red wine, we have to agree that it’s undeniably been worth it.

“You know, I’m kind of envious of rock bands. Rock bands tour for six months, then stay in the studio for six months. So, to answer the first question you clearly asked me...” Ben laughs; we’ve started an undiscussed, but mutually understood game, in which we can ask Ben anything as long as it doesn’t actually feel like a question. “What production?! I’m proof that it’s very hard to produce when you tour all the time.”