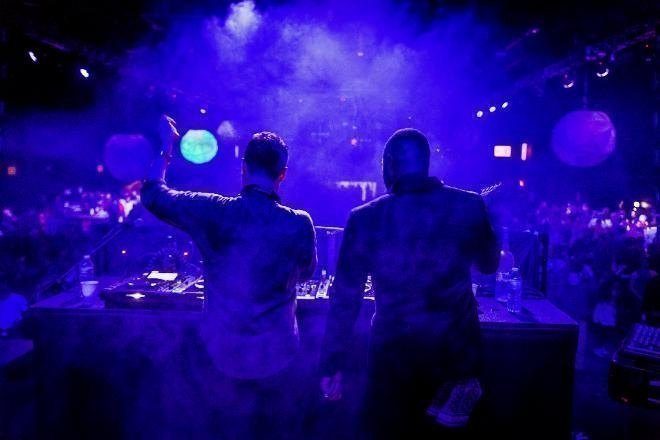 Bob Moses, Gesaffelstein and Justice all saw in New Year's Eve at the Brooklyn Hangar. Area Event and Jukely partnered to transform the massive two-story warehouse into an unforgettable dance music extravaganza that saw out 2016 in fine style. And there was one more name on the bill, too: With You.

The house collective have been something of a mysterious presence, but their place on the line-up was an assured one because With You. is a collective comprised of Dave Taylor (aka cult producer Switch), New York creative Daouda Leonard and LA DJ Rick Trainor. The trifecta represents a convergence of global cultural cities: London, NY, and Boston, which collides in LA. Switch shares his production expertise with Rick and Daouda in the studio, who then showcase it in the booth.

This all developed from a chill drinking session at Dave's house. A few pints in, the three "came up with this interesting idea of releasing house records the same way dancehall music riddims are released: various artists hopping on a riddim." Besides beer, their mutual interests in soul, house, reggae, hip hop, r'n'b and disco brought them together. In the same vein that carefree and energetic dancehall riddims make everyone feel some type of way, With You. came to fruition with a common goal for their house tracks, "using samples and previous music culture to lay a foundation for something new," Daouda and Rick tell us. Other heavy cultural and genre influences that can be spotted within their production process come from West Africa, dancehall, Virginia Beach and Masters At Work. Everything that's good, then.

The group settled on the name With You. because of its full stop inclusiveness and the representation of the spirit of collaboration, a major theme behind their output. Their mission is to work with and learn from a various array of producers, songwriters and artists and that's already been affirmed by collaborations with Spank Rock on 'Gully', Vince Staples on 'Ghost' and Brittany Foster on 'Felt This'. The outcome creates a dynamic that they think is "inspiring, fun and educational [and] has a unique and special energy built in that people can feel," says Rick and Daouda.

Apart from being friends and in a collective with Switch, Daouda and Rick have the enviable privilege of being mentored by him for producing and songwriting. According to both, "Dave should be teaching RBMA courses and giving TED Talks with the abundance of knowledge that he possesses."

Despite already paying his dues as a well-established and successful producer who has produced major tracks for artists like Beyonce and M.I.A., Switch claims the necessary characteristic for a successful producer is a seemingly unquenchable thirst for what's fresh and new.

"Club music's at such an exciting point right now because the fans of what has mainly been an underground phenomenon now have access to everything from anywhere on demand and that's creating a real commercial market [that's] healthy for artists, producers, and DJs," he tells us. "Kids in India, Africa, and Asia are now instantly as informed as kids in London and LA. With You. as a production/DJ collective have a global stage, and that means we have to raise our game if we want to get noticed. A pat on the back for some cool underground track is nice, but we want to try and introduce that underground pedigree to a mainstream audience on a global scale."


Don't sleep on With You. They'll be hard to miss in 2016 with a forthcoming music video, more remixes, an EP for 'Ghost' dropping soon, a mixtape this spring and a series of house parties, among many other ideas in the works.


With You. can be streamed on Audiomack and DJ/Producers can download tracks here. If you want to just hit play and do your thing, indulge in their mixes on Mixcloud