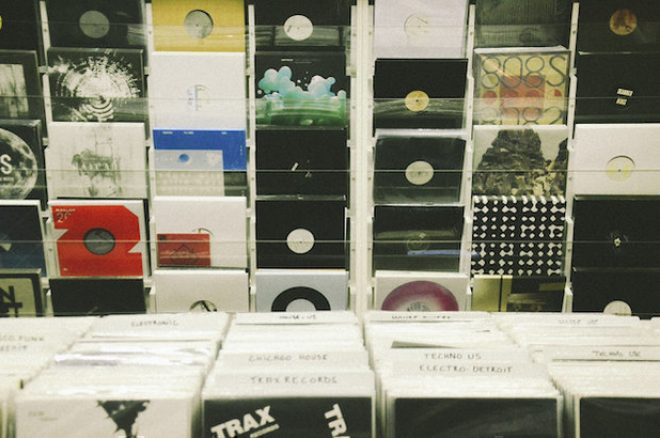 That time of year again? Record Store Day is back and lands on Saturday April 18.

A deluge of exclusives and limited editions get released on RSD so we thought we'd save you the trouble of searching through the crap and come up with a list of the best dance music buys.

Keep an eye on the list below as there are some total gems to dig for come April. Todd Terje's edits of KC & The Sunshine Band come on limited coloured vinyl, A$AP Rocky's banger 'Multiply' is pressed to 7", Dilla's 'Fuck The Police' gets a sick re-release and Hyperdub & Teklife's epic 'Next Life' compilation gets the equally epic triple-gatefold treatment. Don't say we didn't give you a heads up!

!!! 'All U Writers'/'Guetta Gonna Stomp'
Are !!! the last disco-not-disco band going? Carrying on the legacy of ESG and Liquid Liquid (as well as fellow punk-funk peers The Rapture and LCD Soundsystem), !!! return to the fray once again with this double-A side on Warp, which is a RSD exclusive.

A$AP Rocky 'LPFJ2'
Fans of gully NYC rap icon Rocky will dig this 7", pressed as a 'limited edition' on white wax. The A-side features the stone cold, meditative 'Lord Pretty Flacko Jodye 2' while the double-A bears, more excitingly, A$AP classic 'Multiply' (made famous thanks to its Hood By Air diss). Two heavy beats on one record!

'An On-U Journey Through Time And Space'
Adrian Sherwood's legendary On-U imprint brings its typically tripped-out dub stylings to RSD '15. A welcome psychedelic excursion, there's four cuts on this one, including a intergalactic dubwise version of the Doctor Who theme (!!!)

Avicii 'The Days/Nights remix EP'
Want a 12" that commemorates the heady days of EDM? This is it. The Ralph Lauren playboy has given two of his bangers – 'The Days' and 'The Nights' – over to Henrik B, Grant Nelson, Felix Jaehen and Mike Mago to remix and he's also done a new version of 'The Nights' himself. Extended DJ versions of both tracks plus a diverse range of reworks makes this a solid drop, if you're into this kinda thing.

Banks 'The Remixes Part 2'
On-point pop vocalist Banks has previously worked with Lil Silva, Shlohmo and Jamie Woon and here she continues to cast her lyrics over some of the finest production talent dance music has to offer. Aeroplane and KiNK get to go to work on 'Beggin For Thread', giving Banks' tune two new moods on this 12". Instrumental versions of the remixes are included for all you DJs out there.

Dettinger 'Intershop'
'Intershop' was released on Kompakt in '99 but never made it onto vinyl – until now. Fans of one of the German label's cult albums are in for a treat.

ESG 'The Moody EP'
ESG are fucking brilliant and if you don't know about them then please: get to know! The legendary punk-funk troupe get the nod this Record Store Day with 'The Moody EP', collecting some of their classic tracks and pressing them onto green/blue/yellow splattered vinyl. Limited edition for the heads, don't sleep!

Hyperdub & Teklife present 'Next Life'
This mammoth footwork compilation is coming out as a triple-gatefold, silver vinyl package in a limited edition of 1000. It contains 20 tracks from Teklife's packed, frenetic stable and showcases the versatility of the 160bpm Chicago sound. This is a real statement of intent from Teklife following the death of its leader and King of Footwork, DJ Rashad, last year. This proves that the future is bright for the crew and that the legacy of Rashad lives on. All proceeds from this go to his son.

J Dilla 'Fuck The Police'
Dilla fanatics, OG hip hop heads and those who get a kick out of revolution music will be equally interested in and psyched about this RSD drop, which sounds like it'll become a proper collector's item. Dilla's ten-ton anti-cop anthem got cut to wax in 2001 but reappears thanks to its inclusion on 'The Diary', his forthcoming, posthumous vocal LP 'The Diary'. The first single from that album, 'Fuck The Police' is rereleased on RSD on a badge-shaped picture disc with its own custom-made pocket. Nice.

Jon Hopkins 'I remember' (Nils Frahm remix)
Jon Hopkins covered Yeasayer's 'I remember' as an exclusive track for his Late Night Tales mix CD, which came out earlier this year. Its really introverted and melancholic, sending a plaintive piano line into a droney abyss. Now Nils Frahm has been called in to provide a special RSD remix and this 10", out via Late Night Tales, also includes the spoken word version of 'I Remember'.

The Prodigy 'Ibiza'
The Prodigy grow older but they refuse to grow up. 'Ibiza' is from their forthcoming new album and is a potshot at club culture in the Balearics, while the 7" is 'glow in the dark' colour. Predictably rowdy, this will please young Prodge fans as well as the older ones who remain young at heart (much like the band themselves).

Todd Terje and KC & The Sunshine Band
Todd Terje's edits are pretty fuckin' famous and loved by anyone with even the smallest pinch of Balearic spirit inside them. Diggers be warned: Two of Terje's edits of KC & The Sunshine Band will drop on RSD, both limited to 500 pieces. His rework of 'I Get Lifted' comes on yellow 10" vinyl while his version of 'I'm Your Boogie Man' comes on green. Tidy.

Venetian Snares
Five Venetian Snares albums – 'Rossz Csillag Alatt Született', 'Huge Chrome Cylinder Box Unfolding', '2370894', 'Winter In The Belly Of A Snake' and 'Making Orange Things' – will be repressed on coloured vinyl in an edition of 500 each by Planet Mu for RSD '15. Peachy.