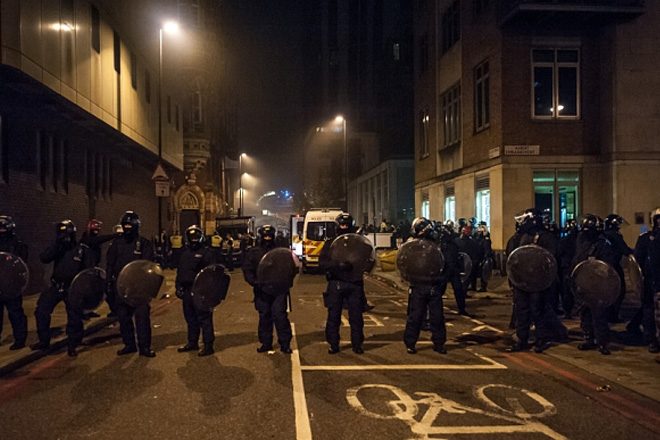 London’s Metropolitan Police Service spent more than half a million pounds investigating an illegal rave in Lambeth, south London, according to information provided to Mixmag under freedom of information laws.

The multi-rig Halloween party, which had been billed as Scumoween: A Nightmare On Scum Street, descended into six hours of violent clashes when the Met tried to shut it down in 2015.

In a statement, the Met said: “Operation Manningtree is the post-event investigation into the unlicensed music event on the 31st October 2015.

“Hence, only the investigation cost has been calculated, not the cost of the initial response.”

The Met spent £562,667 on the operation, according to its statement. It declined to provide us with a breakdown of how the money was spent.

A spokesperson from the Met’s Information Rights Unit said: “The police have a duty to protect the integrity of tried and tested investigative techniques used now and for future investigations.

Covert tools currently used by the Met’s Public Order Command to combat illegal raves and track party organisers include online monitoring and the use of intelligence collection officers that are sent into venues.

On the night of the event, which was organised by the Scum Tek collective, ravers gathered on Black Prince Road at Albert Embankment, before moving to Lambeth Road, Lambeth High Street and Whitgift Street.

Partygoers chanted “We want scum” when officers attempted to shut down the party. Riot police with shields were deployed and charged at the crowd using batons.

A total of 26 officers and a police dog were hurt in the clashes and 54 people were eventually arrested in connection with the event.

After the event, both the free party crews and the police blamed each other for the rioting, with ravers saying the police were too aggressive and unwilling to negotiate a resolution.

The police complained of being attacked and taunted by the crowd when they arrived to close the event, which took place in a disused building.

In a statement released after the party, Scum Tek said: “There were very heavy handed tactics by the police used throughout the night”. It also said “almost all attendees were peaceful, a minority were not, the police were almost exclusively aggressive in nature”.

In 2010 Scum Tek organised an 18-hour illegal rave in a disused Royal Mail depot in central London, which was dubbed Scumoween: The Squat Monsters Ball.

During this event police shut down the soundsystems temporarily, but decided to let people back into the building and allow the party to continue when the crowd spilled out onto the street and caused disruption on the roads.

Read our feature on how police are losing the war against London's illegal rave scene.