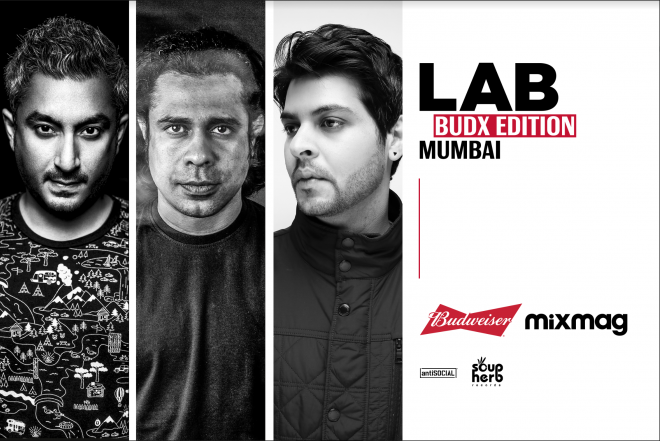 Taking place at the intimate space of AntiSOCIAL, located in the warehouse in Todi Mill, Mumbai, The Lab Mumbai will showcase some of the world’s most exciting talents of house, techno and other electronic varieties.

On Thursday, January 23, we have a very special Soupherb Showcase featuring the co-founders of the Indian underground label, Ash Roy and Calm Chor, along with label artist, Folic State.

Coming out of his career with the popular electronica band, Jalebee Cartel, Ash Roy has remained active in India’s underground scene. With a 20 year career and more to come, he has performed around the world in Germany, Spain, Netherlands, Hungary, Sweden, Canada and more. His inclination towards minimal techno can be heard on his releases for labels such as Trapez Ltd., Monique Musique, Tulipa Recordings and Creepy Fingers.

The talent's dedication to consistency has led him to play alongside renowned electronic music staples including Richie Hawtin, Dubfire, Sasha and Nic Fanciulli. Roy also made his debut performances at Netherlands’ Awakenings Festival in 2017 and Australia’s Esoteric Festival in 2019. Ash Roy is not one to miss as his extensive musical career precedes him.

Sticking by Roy’s side over the course of his twenty year career, Ashvin Mani Sharma aka Calm Chor, is the other piece of the Soupherb puzzle. Also a previous member of Jalebee Cartel, he branched off to continue his career as a DJ and producer once the group disbanded, releasing the ‘Dancefloor Sci-Fi’ EP in 2015. The groovy, minimal techno production landed the artist a number two on Beatport’s worldwide minimal charts. He’s also performed at venues such as Amsterdam’s Paradiso and Mumbai’s Blue Frog.

Folic State is joining the two label founders to showcase his own diverse soundscapes of house and techno. He’s dropped quite a few EPs ranging from 2014’s ‘The Vulgar Story’ to 2015’s ‘Spooky Town’ and ‘Deep Soul’. The artist commits himself to playing shows that tell an introspective journey. His latest track, ‘Conundrum’ has been picked up by Dubfire’s label, SCI + TEC.

If you're keen on checking out the specialities Soupherb Records has to offer, RSVP to attend here.

Find more about the global BUDX program here.
Load the next article