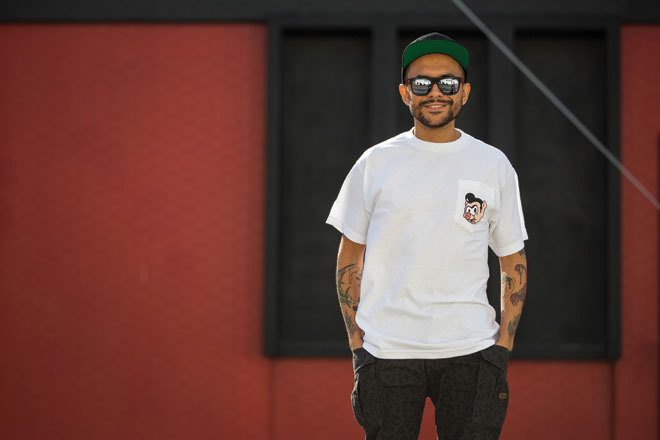 A four-minute blurred-limb beat bonanza that not only reminded the world why he's the only DJ to score the DMC World Championship crown three times in a row, but also how he feels about the performance theatrics, one-hit-superstar status and pre-recorded set culture that's rife in EDM. This summer he followed it up with a mix called '2 Cents'.

Fastidiously fashioned with fellow award winning 'tablist Four Colour Zack, it directly calls out the likes of Hardwell, Guetta and Pauly D for diluting DJ culture. Needless to say it's essential listening for anyone with a passion for quality track selection. While this righteous mission could paint a picture of Craze as an angry elder statesman, he's actually incredibly relaxed company, very funny and consummate pro.

Right now he's busy juggling multiple projects as deftly as he does beats: he's currently working on a series of 'Era' EPs that will focus on each of the many genres he's explored over the years (drum'n'bass, dancehall, moombathon, hip-hop, Miami bass), he's releasing a new EP with Four Colour Zack this month and working on a new routine that is likely to make New Slaves look like he's just pressing play himself.

Somehow we found a window in this tight schedule to fit in a little catch up. Time for some real talk..

A-Trak actually started the whole hashtag, I can't take credit for that, but I got it straight away! I remember walking around Ultra seeing all the theatrics and cheerleading bullshit. I'd been doing the raves and festivals for a very long time but lately I was thinking 'what am I happy with?' Where's my place in this?' So I jumped right in with my two cents; the New Slaves routine. I was shocked how many people dug it. That excited me. It proved that people do give a shit about real DJing. So then we made a mix…


And you properly call out a lot of DJs in it. Have people like Hardwell reacted? Twitter beef style?


Nah nah, same with Pauly D, same with Guetta. No one has. They've kept it quiet and let it pass. There's nothing you can say because it's true! I hope some of them understand that I'm a b-boy, I battle. That's what I did for the first half of my career. It's nothing personal; it's the b-boy flavour of it. People say 'do you hate these motherfuckers?' I'm like 'why would I hate them? I don't know them! I'm just calling out something that is wrong with the culture right now…'


Is the problem because our attention spans are getting shorter and shorter and people can't put in the massive turntable practice sessions?


Yeah and they keep getting shorter! That could be part of it but I think it's more like that they see mixing and scratching and they want to do it, but they can't afford turntables and a mixer. Or they can download Fruityloops, make a chart hit and get famous for no money. When we grew up turntables and a mixer was a lot cheaper than studio gear. It was more attainable than becoming a producer. Now it's more attainable to be a 'superstar' than it is to become a turntablist or a badboy DJ.

When did producing come into your career then?


I always had Logic but I knew it took time. Just like scratching, just like skating, just like anything. With DJing and family life I never had that time but recently I made time for it. Producing is like a video game; what's the new thing I can learn today? How can I make my beats better? Plus I love playing my own tracks when I spin out. It will never be top priority, though. That's DJing, then the label.


It's dope. We do it for fun. No timelines or deadlines or any of that shit. It is strictly for the love. Jake (Stanczak, Kill The Noise) has my back on everything I pick and I'm one of his biggest fans. He's why we started the label. He wanted to put out his first Kill The Noise EP out and I said 'Let's release it!' But Jake and I go back further. I knew him back when he was Ewun, we'd DJ at the same d'n'b raves.


Of course. d'n'b was your creative outlet when you fell out of love with hip hop 10 or so years ago, right?


Yeah it was. A lot of us were feeling that; hip-hop was getting too jiggy so we all fell into d'n'b.


D'n'b was your gateway drug!


Most definitely. I was doing dance music when all my hip-hop homies thought it was just weird fucked up beeps. I remember A-Trak when he didn't fuck with dance music at all! He was like 'nah man, this is weirdo music.' Now it's normal. And yeah d'n'b was my gateway into all.


That was a huge moment for both worlds. I credit A-Trak for all that stuff. He was getting into electro and Ed Banger and Daft Punk around that time. I've always imagined him doing the sound check prior to DJing with Kanye and saying 'Yo Kanye! Check this shit out!' And Kanye would be like 'what the fuck is Daft Punk?' The rest is history.

You toured with Kanye after A-Trak didn't you?


Yeah, he wanted to develop his own career and Fools Gold and everything in 2008 so I came on and did the Glow In The Dark tour for a year with Kanye, Rihanna and N.E.R.D. That shit was crazy.


What's Kanye like behind the scenes? Is there a chill, regular guy underneath all the nonsense?


Kanye is Kanye! That's how he is, man! You either love it or hate it, but I love the way he knows what he wants and what he likes. Kanye is all about Kanye and that's fucking cool.


Speaking of cool… I read you once had a Hummer bigger than your house?


Ha! Yes I did. It was around 1999/2000. Money was coming in and I didn't know what the fuck to do with it. The Hummer had just come out, I'd just become a father so I got me one of them. It ended up being a bit of curse; it got broken into three times and every time it happened I put more shit into it like an idiot. It was bad news. That's one thing I'd change about the past; be more careful with money.

Back to the future: are you working on a new routine?


Among other things. There're a lot of releases going on as well. Right now it's all in my head but when I do it I want people to watch it and go 'fuck Craze! He's an idiot! There are no more levels to go to now!'


Ha! How long does it take to perfect a routine, then?


I still haven't perfected New Slaves! There's so much shit going on with buttons and cue points and samples. I know I've got it locked down when I can do it tipsy. I can do New Slaves 90 per cent when tipsy so I'm almost there… Then I do a new one. Watch out!