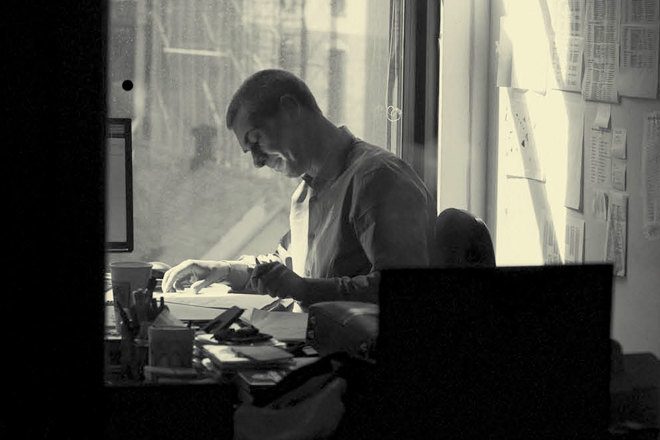 Patrick Moxey, 48, was born in the UK but grew up in the States. He founded Ultra Records in 1995, a label that's gone on to dominate US dance music, with a stable of artists ranging from the Bloody Beetroots to Benny Benassi. Ultra's YouTube channel, its festival presence, its TV alliance with Simon Cowell's SYCO organization and its partnership with Wynn Hotel in Las Vegas all broke new ground for club music. In 2013, Ultra partly folded into Sony, and Moxey became president of Sony's Dance/Electronic Music division. We caught up with him over the phone from LA to talk Gang Starr, old-skool raves, Masters At Work and what's about to blow up.

How did you first get into the industry?

I studied literature, history and anthropology at the University of Chicago, but at night I was DJing on student radio and in clubs. When I moved to New York in 1987 I was on the Lower East Side, and the only person who spoke English within twenty blocks. I rented a couch from a painter for $200 a month to sleep on, and started throwing parties in downtown Manhattan. All my parties were named after candy bars – Payday, $100,000 Bar, Milky Way. I'd rent warehouses, war veterans' homes, El Salvador refugee centres – whatever spaces I could find. Payday was more hip hop. I did the first show by Rob Base, the first by De La Soul. Keith Haring used to make the invites. John Kennedy Jr and Daryl Hannah would be there, but also Russell Simmons and Tom Silverman from Tommy Boy. Then on the house night I'd have Derrick May or some of the Jersey DJs spin.

What about the label?

I went on to Payday Records, a hip hop label where I signed Jay-Z to Polygram, then I started Ultra for dance music. I could see the energy and underground passion. We started putting out house records: Roger Sanchez, Naked Music, MK, Basement Boys. I had enough cash to press one 12": it was Roger Sanchez' 'Transatlantic Soul'. That was the first record on Ultra. It grew from there.

How has Ultra changed since?

We've constantly evolved. We worked with Sasha & Digweed, for example, and broke them in America. They were coming once a month to play a club called Twilo. Every time they came, over a two-year period, we'd organise three or four interviews. At the beginning we got them interviews in the smallest fanzines; by the end they were doing interviews with Rolling Stone. We went from selling 5,000 copies of the first 'Northern Exposure' [mix CD] to selling many thousands of their records.

There was never a possibility we wouldn’t stick with dance because we know how real it is.

And in more recent years?

We worked on David Guetta in America, got him his first Top 40 airplay; we put out three great Tiësto albums; we had Calvin Harris' first hit with 'Feel So Close' and got that on Z100 and other stations; we've had gold albums for Deadmau5 and recently we've been working with artists like Kygo and Steve Aoki. We have a huge hit record right now with OMI's 'Cheerleader'. It's a Caribbean record and I had a German remix done by a guy called Felix Jaehn. It's gone to No 1 in every country that's releasing it – Sweden, Denmark, Germany, Holland, Australia, and it's released in the UK in March.

How does your typical day run?

It starts when I walk my eight-year-old to school. That grounds me. After that I'm on the phone to Europe, then I focus more on the US, calling radio stations, then a very long A&R meeting where it's just great to go through music for hours. I talk to LA at the end of the day. That's pretty much been my average day for twenty years.

Did you see the EDM boom coming?

It looked like everything was really going to fly [in the US] with The Chemical Brothers, The Prodigy and Fatboy Slim in 1996, '97, '98, but two years later 'dance' was a dirty word. I remember going to radio stations and they basically refused to play dance records. There was never a possibility we wouldn't stick with it because we know how real it is, how authentic. As far as the EDM boom goes I can only say that every time the radio said, "No we're not going to play it," I went back again and again until they played David Guetta or Calvin Harris, until they booked Deadmau5 for the MTV Music Awards, until they said yes.

What are you most proud of?

Managing Gang Starr for fifteen years, because that put me at an amazing time in hip hop. I got to be in a room with Biggie Smalls, and I met Tupac. In dance music I have really fond memories of working with Roger Sanchez and David Morales, and of managing Little Louie Vega, taking him to England for the first time where he stayed at my mum's house in London. We went to the first rave I'd ever seen, called Sunrise 5000. We crossed a field at five in the morning as the sun was coming up, carrying heavy record crates to an aircraft hangar with a fun fair in it. I'd never seen anything like it my life.