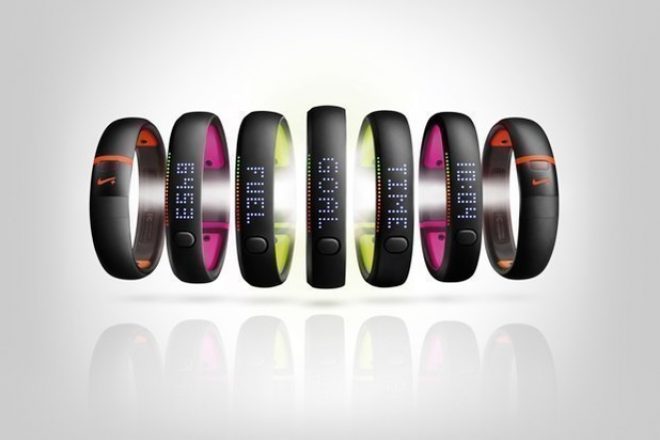 One of the first true wearable gadgets to hit the market, the Fuelband was a lifestyle gadget that actually made fitness fun, and the Fuelband SE picks up where its predecessor left off. Tracking your movement through the day and showing you your progress via an app or online, the new Nike Fuelband keeps everything that made the original great and adds a few interesting features.

Featuring a minimal, rubberised appearance the Fuelband SE loosely follows the original formula - but this time allows users to pick the inner colour of the bracelet. Beaming to life with the click of its only button, the new Fuelband SE still feels like a gadget from the future, with bright white OLEDs and a red to green scale appearing from nothing.

As well as its sleek exterior, the original Fuelband owed much of its success to its intuitive iDevice only app. Easy to use, visually slick and with a strong competitive, social element, Nike's Fuelband app continues to give you reason to move - pitting you against yourself as well as your friends. What's more, Bluetooth LE also ensures that you have the most up to date NikeFuel count, without killing your battery.

One of the main complaints with the original Fuelband was its inability to accurately track exercise, and thankfully Sessions changes all that. After picking from a range of activities including Dancing, Cycling and Running, the new Sessions feature will better calculate points burnt for activities where the band may move differently. Great for those that cycle or lift weights, Sessions won't penalise you for slower movements - giving you accurate points both on the dancefloor or the gym.

Another new feature, Win The Hour encourages wearers to move a minimum amount each hour, spurring wearers into action with a message on the band as well as a notification on the app. A surprisingly fun reminder of how immobile you've become, Win the Hour is a nice addition that will make a difference to your day. In the small hours, like the Jawbone Up, the Fuelband SE also now let users track their sleep to a limited but useful amount.

More evolution than revolution, the Fuelband SE builds on everything great about the original - but with the market becoming more congested than ever, it's a pity it doesn't do more to set itself apart. Still great to use but looking slightly long in the tooth compared to the svelte Sony Smartband and the Samsung Gear Fit, the Fuelband SE is still a life-changing product - but it might not be the obvious choice for iDevice users it used to be.