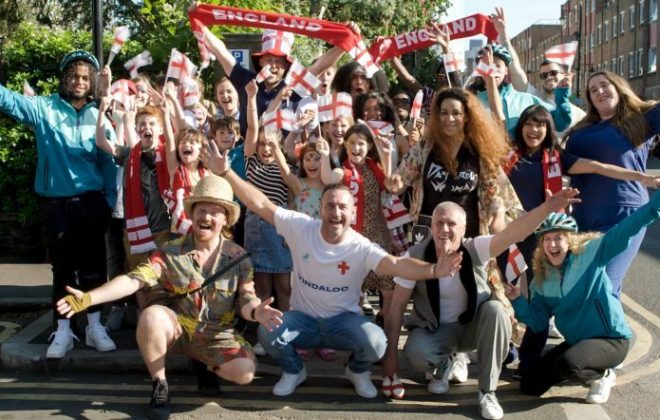 A host of famous British musicians and actors have collaborated to record a new version of football anthem ‘Vindaloo’ to kick off Euro 2020.

Bez and Rowetta of Happy Mondays, Danny Dyer, Paddy McGuinness, Keith Allen and a number of others have come together for the re-recording, with proceeds going to NHS Charities Together.

Will Mellor spoke about the reasoning behind the re-recording, saying: “‘Vindaloo’ was the unofficial anthem for England fans back in 1998 and it’s been sung at tournaments ever since, so we owe a big thank you to the Keith Allen & co-writers Alex James & Guy Pratt for giving us their blessing to put a new spin on the song in support of the NHS.

“With help from Deliveroo, we want to bring this song back – in stadiums, pubs and at home – to put some smiles back on people’s faces and bring the nation together after such a tough time. It’s such an uplifting song and it’ll give football fans something extra to sing about because every time someone streams or buys the single, they’ll be saying thank you to the NHS.”

England’s Euro 2020 journey begins with a highly-anticipated game against Croatia on Sunday, June 12, with England hoping to take revenge after their 2018 World Cup semi-final loss. They then face Scotland on June 18 and the Czech Republic on June 22.