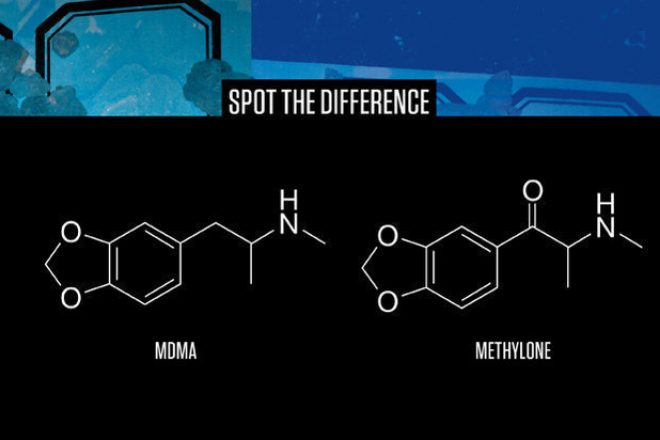 The reasons for the recent explosion in dance music in the US are many. Great visual shows, huge investment, a generation of homegrown talent, the rise of dubstep – take your pick. But even the most straight-edge 'only-in-it-for-the-music' clubber would admit that the widespread availability of experience-enhancing stimulants has a hell of a lot to do with it. And even Madonna knows that the stimulant of choice for EDM is 'Molly'.


Molly is American slang for MDMA, which is sold as crystals or powder. Ecstasy pills contain MDMA (if you're lucky). MDMA became known in the 1980s as Ecstasy. Molly is MDMA is Ecstasy; Ecstasy is MDMA is Molly, right? A look at the most recent Mixmag Drugs Survey shows that among US respondents who had been out clubbing in the past month, 50.9 per cent said they had taken MDMA powder. Except they probably hadn't. In the US in 2013, a huge amount of Molly is not MDMA, but a different drug altogether: methylone.

Recent seizures and testing of drugs at street level show that methylone is rife in certain areas of the US – particularly in Miami, home to the biggest EDM events in the country. In March this year, the Miami Herald reported that in just 12 months there had been a staggering 16-fold increase in seizures of methylone, while MDMA seizures had dropped off a cliff. In 2011, Miami police reports show drugs sold as Molly were seized and submitted for testing 207 times. The overwhelming majority – 190 – contained MDMA, while just 17 contained methylone. But in 2012, seizures were up to 337, a 63 per cent rise. Testing proved that 278 samples contained methylone, and just 59 contained MDMA.

A mixture of denial and disinformation means that official US government figures about drug purity and composition are very difficult to come by. But the figures for Miami are backed up by guerilla field-testing and the latest data from voluntary drug-testing labs across the US. "Synthetic cathinones [the drug family that methylone belongs to] and other stimulants are sold as 'molly' more often than MDMA is," says a representative of a guerilla drug testing organisation, Bunk Police. "Individuals are purchasing research chemicals by the kilo and substituting them more often than they are actually selling the [supposed] substance itself."

Bunk Police started up two years ago and circulate at big EDM events and festivals in the US, handing out drug testing kits.

The latest findings from www.ecstasydata.org, a site staffed by volunteers that tests pills for users around the world, confirm the rise of methylone. In the last few years, dozens of test samples sent to their labs by the public came back with methylone in them, sold as MDMA, ecstasy or molly. Check its 'advanced search' page: you can specify adulterants – such as methylone – and name your state and time period. In the last few years, methylone has been identified in dozens of samples sold as Molly/MDMA. So have many other drugs.

Traditionally, crystal forms of MDMA – often sold in capsules, have been more trusted than pills, because you can see what you're getting. Methylone – which has the chemical name BK-MDMA – was synthesised by Alexander Shulgin, an American drug chemist known as the godfather of ecstasy, and it has a similar active dose as MDMA. It looks the same, sometimes; off-white or tan rocks about as big as half an M&amp;M sweet. At other times it looks like double-sized sugar grains. Chemically, methylone is very nearly identical to MDMA – in fact, its chemical structure has just one more oxygen atom than MDMA, but this makes it a very different drug. It's almost an 'MDMA-lite' – but that's not to say it's safer, or less toxic.

The effects of methylone are pretty similar to MDMA, and you could quite easily confuse the two. Mark, a London-based DJ [not his real name], has tried both drugs and compares them fairly favourably. Methylone was legal in the UK until it was banned in 2010.

"Methylone is fun, but I'd rather have MDMA for sure," he says. "Methylone makes me sweat like hell, and gives me a tight jaw. The high isn't as deep and is a shorter buzz. It can make you quite touchy-feely and even horny – it's pretty good for sex, though most guys can't come on it. But the thing I least like about it is that it leaves me wanting more, like coke. Also, methylone is a little more harsh on the comedown and leaves your heart beating quite hard, whereas MDMA doesn't," he says. "I wouldn't be totally pissed off if I got some methylone for a night out, but I'd want to know what I had – and I'd want to pay less for it."

As an adulterant, it's among the least bad things it could be, nowadays. Luckily, it's not massively toxic and the dose range isn't that different to MDMA – a standard dose is around 100mg, or a tenth of a gramme, much like ecstasy.

Other common adulterants in US pills and capsules include TFMPP, a vile drug that will make you feel wakeful, hot and restless, and 5-MEO-DipT, a powerful drug that should never be mixed with other substances as it can react badly and cause spasms. A kilo of methylone can cost between just $3,000-$5,000 wholesale. A kilo of MDMA trades for at least 10 times that in the US. Most MDMA is made in clandestine labs in Holland, where there is great expertise, shorter jail sentences, and more comfortable prisons. The street price of a typical hit of Molly or MDMA in the US is $10–$20 – meaning those selling methylone as MDMA are making huge profits. Methylone is made in industrial quantities in China, where it is legal. When researching this article, and my new book, Drugs 2.0, I called dozens of laboratories in China and made enquiries. Just two days ago, I called one who was highly recommended on vendor review sites and asked the owner if he could provide me with a kilo of methylone. "No problem," he said. "We can make you any quantity you want." I asked for a tonne over 12 months. "No problem."

An essential site for drug users in the US to visit in the absence of any coherent or rational government drugs policy is www.pillreports.com – though again, it's 'buyer beware' in an illegal market. There is, though, one simple way to find out if you've got methylone or MDMA or any of dozens of different chemicals: buy a pill-testing kit. The kit you need is called the Marquis Reagent; it's simple to use and easy to buy online. Bunk Police also sell them from their Facebook page and have regular giveaways.

Buy it, use it, and if the liquid goes to a darkish purple or black, chances are that you have MDMA – though to be totally sure, you'd need to have it tested by a lab such as www.ecstasydata.org since some substances, including the deadly PMA, can sneak through. If the chemical you have been sold as molly turns the Marquis Reagent yellow, it's methylone. There are dozens of substances that could be in a dose of molly: just because you're sweating it doesn't mean you're on MDMA. Like so many new drugs, there isn't enough research to say whether methylone is any more dangerous than MDMA (even MDMA can and does kill, but then again people have been taking and researching it for decades).

If you think your molly contains methylone, or if you are one of the 9 per cent of US respondents who told the Mixmag Drugs Survey that they had taken a 'mystery powder' in the past 12 months, the same rules apply to stay safe with methylone as with MDMA: don't mix your drugs, stick to your limits and don't binge, stay hydrated (but no more than one pint of water an hour), don't drive, look after your mates, cool down if your temperature rockets, and don't drink alcohol excessively.

Mike Power's book Drugs 2.0 – The Web Revolution That's Changing How The World Gets High is available now for £14.99 published by Portobello Books.