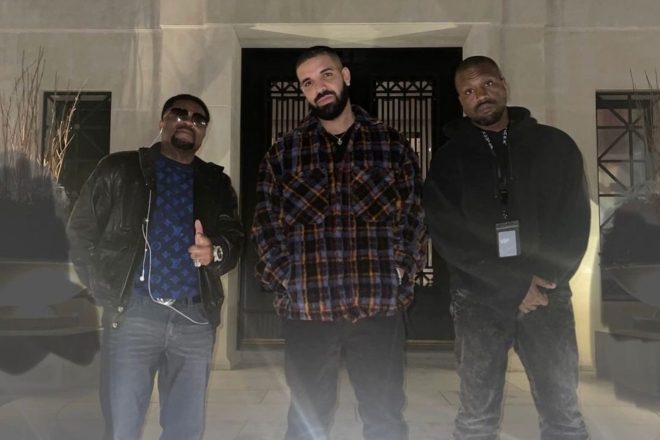 It appears that Kanye and Drake have kissed and made up after years of beef.

Posting a picture on Instagram last night, Kayne, who now goes mononymously by Ye after legally changing his name, posed with Drake and J Prince to show their fans that they’ve made amends.

The rapper posted the picture alongside a dove emoji, signifying the end of their half decade-long beef, and symbolising a new age of peace between the rappers. The photo has so far racked up nearly three million likes.

Drake also played his part in sharing the news, posting a video earlier in the evening on Instagram which showed Ye wielding the camera inside a nightclub, while the pair drunkenly pose together.

Drake just shared this video with Ye via Instagram: pic.twitter.com/WixsErksmN

The two have settled their differences following Ye’s open statement to Drake offering that the two play a live show together just last week.

“I’m asking Drake on December 7 to join me on stage as a special guest to share the two biggest albums of the year, live in Los Angeles, with the ultimate purpose being to free Larry Hoover,” Ye asked in a public statement to the Canadian rapper.

Read this next: Kanye West slams #metoo movement and calls it a 'mob mentality'

“I’m making this video to address the ongoing back and forth between myself and Drake. Both me and Drake have taken shots at each other, and it’s time to put it to rest.”

It’s unclear if the rapper will appear at the December 7 event alongside Kanye just yet, but it looks as though the pair have firmly squashed the beef and buddied up once again.

But, if the past is anything to go by, their newfound peace might not last long. The rapper’s on-off track record would suggest that more drama could unfold at any moment in the form of address doxing, song leaks, or perhaps even a diss-track.