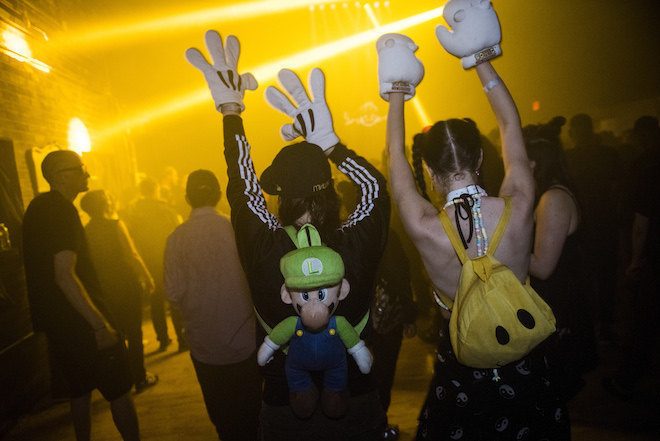 It's an appropriately dark and stormy night, and dozens of aging and young ravers are congregated outside a Brooklyn warehouse in anticipation of the 25-year reunion of the original Storm Rave DJs: Frankie Bones, Adam X, Lenny Dee and Heather Heart. From inside the warehouse classic hardcore tracks boom, causing the people outside to grin at each other and nod their heads in approval and anticipation.

The Storm Rave parties are legendary in the New York rave community. The parties were revolutionary at the time and threatened the reigning order of the nightclub. Though for some, the fact that Red Bull was throwing a sanctioned event as part of the Music Academy festival, with pre-sales, alcohol and security, was less a tribute and more a slap in the face of the rave community.

It's nothing the original Storm Rave crew hasn't heard before.

"It's not going to be a totally authentic 1992 experience. I mean, 25 years has changed a lot in New York," notes Adam X, one of the New York techno scene's earliest pioneers.

Before the unbridled gentrification marshaled by former mayor Giuliani, graffiti covered the city, crack was king, and the Manhattan clubs dictated what people danced to and how they would do it.

Much has been written about Frankie Bones 1989 trip to England being the beginning of rave culture in the US, but New York City has a long history of dance culture all its own.

The art of DJing was arguably created, or at least perfected, in the city's discos in the 1970s. When the rest of the country had smashed their disco records, the music was kept alive on the radio and in roller rinks across the five boroughs. Sheepshead Bay, the neighborhood that Lenny, Frankie, Heather and Adam hail from was famous for the Roll-A-Palace, a huge roller rink where south Brooklyn youth skated to the nascent sounds of electronic music in the form of early electro and Italo disco.

It was here that aspiring DJs Lenny Dee and Frankie Bones first learned from one other as they vied for coveted spots behind the decks. The pair initially viewed each other as rivals until veteran selector Tommy Musto squashed their beef. Musto, who also hailed from Brooklyn, served as a role model for Lenny and Frankie and drew them deeper into dance music industry, getting them jobs at his record labels Fourth Floor Records as in-house producers and engineers. Lenny, along with Musto, is often credited with writing one of the earliest deep house tracks "The Morning After" on Fourth Floor Records.

But it was Frankie and Lenny's production work at Nu Groove as Looney Tunes that eventually brought the duo to Europe to experience "the second summer of love" and the rise of rave culture in England. Hooked, the two brought back as many records as they could and began actively trying to recreate the scene back in Brooklyn.

Frankie recruited his younger brother, Adam X, along with other kids from the neighborhood like Jimmy Crash, Ray Love and Heather Heart. Adam, under the alias 'Ven', was one of New York's biggest graffiti writers as well as one of the main targets for the NYPD's vandal squad, and used his consummate knowledge of the transit system to scout locations for the parties. Heart, inspired by her time in the New York punk scene, created a DIY zine "Under One Sky" to document the time period.

The first Storm Raves were revolutionary. Thrown mostly for friends, they were held throughout the outer boroughs in spots as diverse as empty apartments and in the coves under the Belt Parkway. Frankie and Adam worked hard to distinguish their parties from club nights, which had a reputation for gang violence. Frankie is credited with coining the concept of "peace, love, unity and respect" as a way to bring together different neighborhood gangs attending the parties.

"It's just how clubs were at the time. There was no real outlet. The youth wanted something," says Adam X. "More and more kids came out when they realized they could have fun on a Saturday night and not have to fight the kids in another neighborhood."

A new drug called ecstasy also had much to do with it.

The parties themselves were also decidedly anti-club in aesthetic. No longer forced to adhere to a club's dress policy, baggier clothes began to become the fashion. Sound systems became larger with a "wall of sound" becoming the ideal. Drug use was open and alcohol was frowned upon.

The music was also revolutionary. Instead of the pop freestyle and house played in clubs, ravers embraced the darker and harder four-to-the-floor records emerging from Belgium and Frankfurt, and tracks like 'Magic Bells' by Two Pieces, 'Mentasm' by Second Phase and 'We Have Arrived' by Mescalinum United seemed to ring in a new era in dance music with an emphasis on bass and aggressive distortion.

Visiting ravers from out-of-state would return home to spread the gospel of rave with their own crews like Drop Bass Network, and they'd champion the records that they'd purchased from Frankie and Adam's shop Groove Records in Bensonhurst.

Around this time Lenny found himself uninspired with the label work he was doing at the time with Musto and Arthur Baker and started his own imprint, Industrial Strength Records, to promote the aggressive sounds that were being played at the raves.

"For me, the focus is always going to be the new, the new, the new," notes Lenny, who ditched the fame and notoriety he'd found early on and developed the sound that came to be hardcore techno. "At that point I was one of the biggest DJs in the world, one of the biggest producers in the world. I had hits and a string of successes and I discovered what I thought was the end of the road was for electronic music. [Industrial Strength] was a conduit for me to say 'enough is enough'."

By the final Storm Rave in 1993, the music had started to fracture, creating fissures in the scene that would widen as time went on. Instead of just one incarnation of "rave", different characteristics of tracks began to be emphasized. Hardcore, trance and jungle all began to metastasize during this period, taking their own followers and further splitting the scene. Clubs took advantage of the split and began to have their own parties featuring specific genre.

Violence too became more of a factor at parties. Before kids had gone to escape fights, now crews like Brooklyn Terror Squad began going to parties to rob drug dealers and ravers. Increased media coverage, including a disastrous Dateline special, elevated "the problem" of raves to politicians looking for easy targets.

By the time the Reducing American's Vulnerability to Ecstasy (RAVE) Act was proposed in 2001 by then Sen. Joe Biden, the writing was on the wall for raves in New York. Clubs, once the enemy of raves, became the only place you could hear the music in all its over-the-top glory.

As it gets closer to 4am the mood of the crowd remains euphoric. Frankie Bones gets behind the decks, he holds up a flier from the original Storm Rave and the crowd roars. Looking around we truly feel that we're being given a look back to the true origin of peace, love, unity and respect, and for one night, thanks to the crowd, the music and the DJs, a vibe has returned to Brooklyn that's been missing for years.