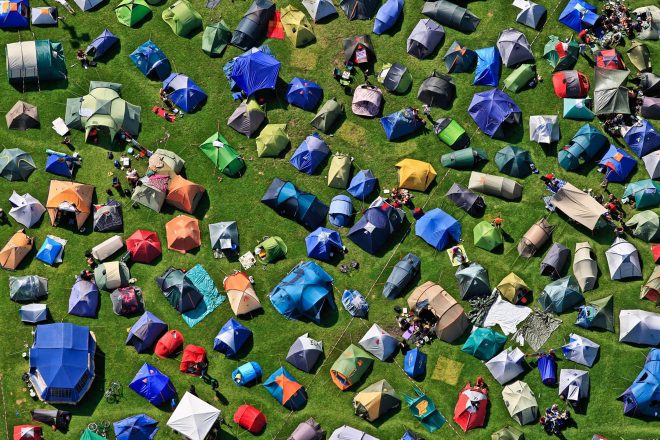 A collective of more than 60 independent UK festivals are calling for an end to the sale of festival tents marked and sold as single-use.

It is estimated that 250,000 tents are discarded at the end of events by festivalgoers across the UK each year, contributing to nearly 900 tonnes of plastic waste, as many of the portable shelters made largely out of plastic end up in landfills because they are not collected by charities or cannot be recycled.

The Association of Independent Festivals (AIF), which includes events such as Bestival, Boomtown, and Beat-Herder, is also urging festivalgoers to take their tents home at the end of festivals. A 10-year report published by the AIF last year found that 10 per cent of attendees at festivals within the group had left a tent behind during that the 2018 festival season.

CEO Paul Reed said: “We call upon major retailers to stop marketing and selling tents and other camping items as essentially single-use, and profiting from disposable culture. AIF launches this campaign to raise awareness and highlight abandoned tents as part of the single-use plastics problem.

“The message here is not to buy a more expensive tent - with a single tent carrying the same amount of plastic as more than 8,700 plastic straws, festival audiences can take positive action and reduce their carbon footprint simply by taking their tent home and reusing it, ensuring that it doesn’t become a single-use item this summer.”

Watch an info video below.

Glastonbury will not sell plastic bottles at 2019 edition
Ibiza is banning disposable plastics
We went on the road with techno duo Blond:ish